Tom Henne went directly into quarantine when he returned home to Germany in March. His spring training with Le Moyne College’s men’s soccer team had been cut short because of the coronavirus pandemic.

He began practicing with his old club team in Hamburg three months later, but they had to keep their distance from one another. The team expanded practices in July to 10 players. Then, in August, the entire team practiced together. Though games started back up for Henne in Germany, his Le Moyne teammates in the United States still couldn’t use athletic facilities.

When Henne returned to central New York in August, leaving his club team right before it started playing games, he was forced to quarantine again. His redshirt sophomore season was already canceled after the Northeastern-10 conference unanimously voted July 16 to suspend seasons until 2021.

Fall teams at SU and most Division Ⅰ colleges in the U.S. are preparing to start their seasons, and some games are taking place as early as this week. But for smaller programs like Le Moyne’s and those of other Division-Ⅱ schools, the NCAA postponed their seasons to the spring.

One of the teams at Le Moyne that the postponement most impacted is the men’s soccer team, which qualified for the NCAA tournament in 2018 and have a 19-year streak of going to the NE-10 playoffs heading into this season.

“I always had this feeling that (the season) wasn’t going to happen in the fall with everything that was going on,” said Tom Bonus, men’s soccer head coach. “I thought we had a good year last year and I thought that from the time the season ended until now, a lot of guys have learned a lot of things that we can build on for the fall.”

LeMoyne has eight international players on its men’s soccer team, including some from Europe. The Dolphins haven’t been able to mandate practices since the spring due to NCAA regulations and the guidelines set by the states and countries players are from, Bonus said. The team also has yet to receive the school’s approval to begin practices.

Bonus held Zoom meetings this summer with the entire team, but most of the training was left up to the players.

“The government made some restrictions on international traveling, and that was tough too because I (was unsure if I could) come back even if we only have online classes,” Henne said. “I tried to stay positive throughout the whole time.” 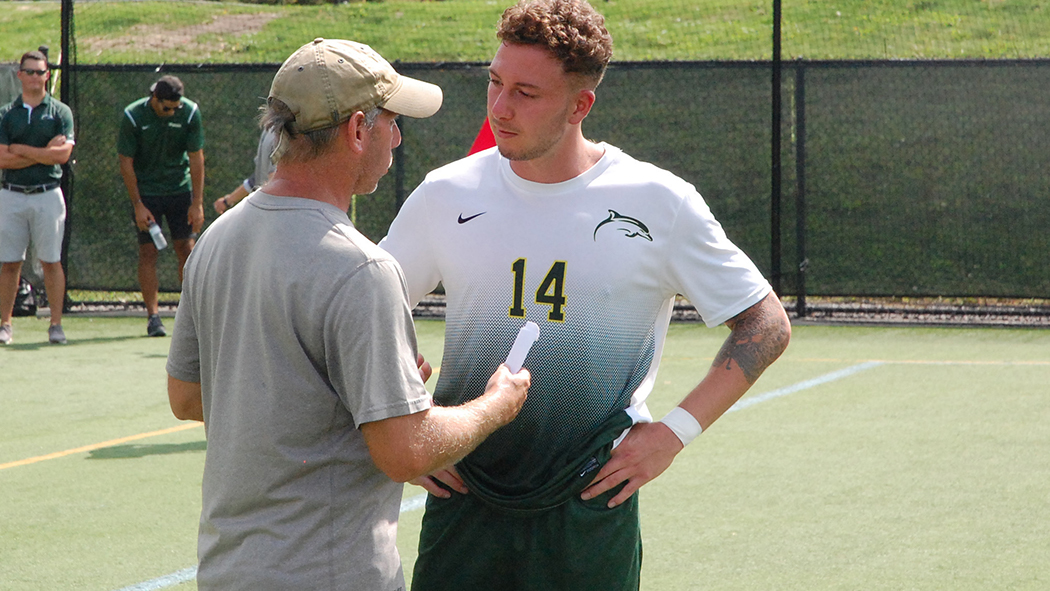 While team members such as Henne faced tough choices about international travel, seniors also faced difficult decisions. Senior captain Patrick Strauss and others are considering professional soccer careers in other countries, but their plans are now jeopardized due to travel restrictions. Others are considering the NCAA’s extra year of eligibility, which was granted Aug. 21.

“I was really looking forward to solidifying everything and making the kind of pinnacle of everything coming together in my senior year,” Strauss said. “Unfortunately, that’s not the case.”

Even though a spring season isn’t guaranteed, the Dolphins can still recruit and build their program for next fall. One of the advantages of working for a smaller program is that the recruiting rules for players out of high school are more relaxed, Bonus said. The NCAA also allows Division Ⅱ or Division Ⅲ programs to bring potential recruits to practices or workouts with the team so the college can see the player’s skills in person.

Division-I schools, on the other hand, are still in a dead period for recruiting.

“Before this pandemic really hit and some of the things that were laid out by the NCAA about what we could do and what we couldn’t do, we were really ahead of the curve,” Bonus said. “As far as the identification piece, we’re still doing Zoom calls, and we’ve got so many contacts that we deal with it both here in the United States and overseas (to stay) in the mix.”

In addition to recruiting, Bonus and his assistants have started planning tactics for the spring season. Strauss, who was a part of the 2018 squad that went to the NCAA tournament, said this year’s team has the chance of going deep into the NE-10 playoffs in the spring.

“I think we could do something great if it happens in the spring and we get the chance to prove ourselves because last year our season ended too early in the first playoff game,” Strauss said. “The practices and training were the most intense out of my four years.”