Syracuse forward Lauren Bellefontaine had four faceoff wins against Rochester Institute of Technology halfway through the second period. With less than 10 minutes left in the period, she went back to the faceoff circle, opposite RIT’s Hana Solinger. Looking for her fifth win of the night, the right-handed Bellefontaine held her stick left of the faceoff dot.

As the referee dropped the puck, Bellefontaine moved her stick back to the right and was able to win her fifth faceoff of the night. A few seconds later, Bellefontaine got the puck back and passed it to Jessica DiGirolamo, who fired a shot to give SU a 2-1 lead.

That faceoff win was Bellefontaine’s ninth of the game. However, the Kemptville, Ontario native didn’t lead the Orange on the night. Sarah Marchand, who received more opportunities from the circle, finished with one more win than Bellefontaine. But this was only one of the two games where Bellefontaine did not have the most faceoff wins for SU.

Bellefontaine is behind Mercyhurst’s Alexa Vasko (176), RIT’s Lindsay Maloney (154) and Penn State’s Kiara Zanon (152) in conference faceoff wins, but all three have played more games than Bellefontaine. The SU forward averages 13 faceoff wins per game while Vasko and Zanon average 12.6 and 12.7, respectively.

On every faceoff, Bellefontaine grips her stick as tight as she can and puts full force into the faceoff. “I just look to move my stick as soon as they drop the puck,” Bellefontaine said. “I don’t even look down. I just look at the puck.”

Bruce MacDonald, the general manager of the Nepean Junior Wildcats, coached Bellefontaine for two seasons in high school. MacDonald taught Bellefontaine and the rest of his players to have a low center of gravity during faceoffs. He also told Bellefontaine to have her feet strongly set in their vital role, something Syracuse head coach Paul Flanagan also told the center. 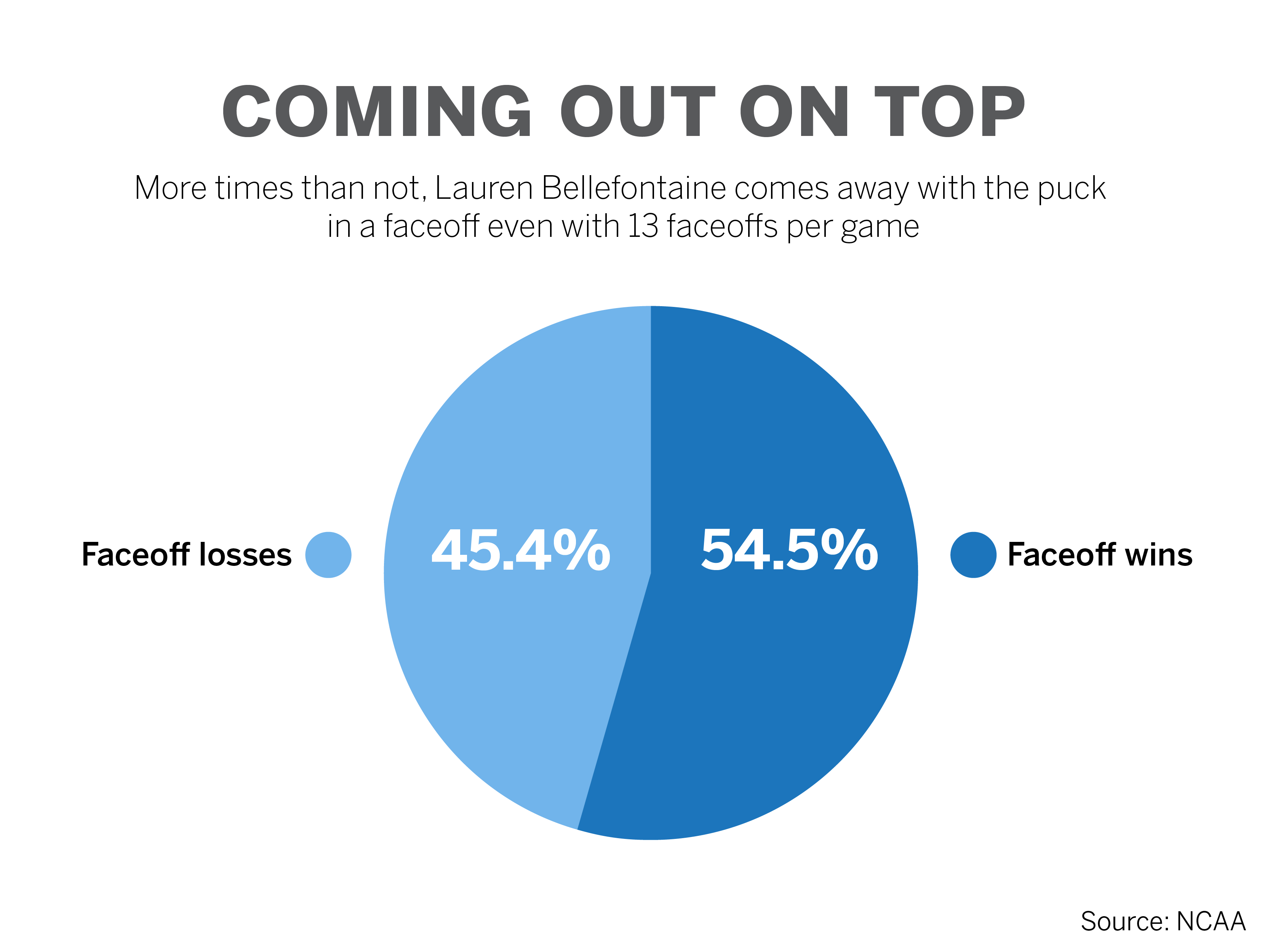 “As a center, you have to dictate and to take control,” MacDonald said. “I think that’s the biggest thing that I told centers, is that you’re the captain of that line.”

MacDonald said Bellefontaine would always try to push the puck forward and win the draw cleanly. She also was able to create a low center of gravity — with her 5-foot-7 frame — against taller opponents. Bellefontaine had quickness, good reflexes and anticipation, all skills that were most important at the position, MacDonald said.

Bellefontaine was also dominant in the circle by using her right-handed grip as an advantage over left-handed players. While players usually try to win the puck by moving it straight behind them, MacDonald said Bellefontaine would try to win it clean and go on a different angle with her right hand. 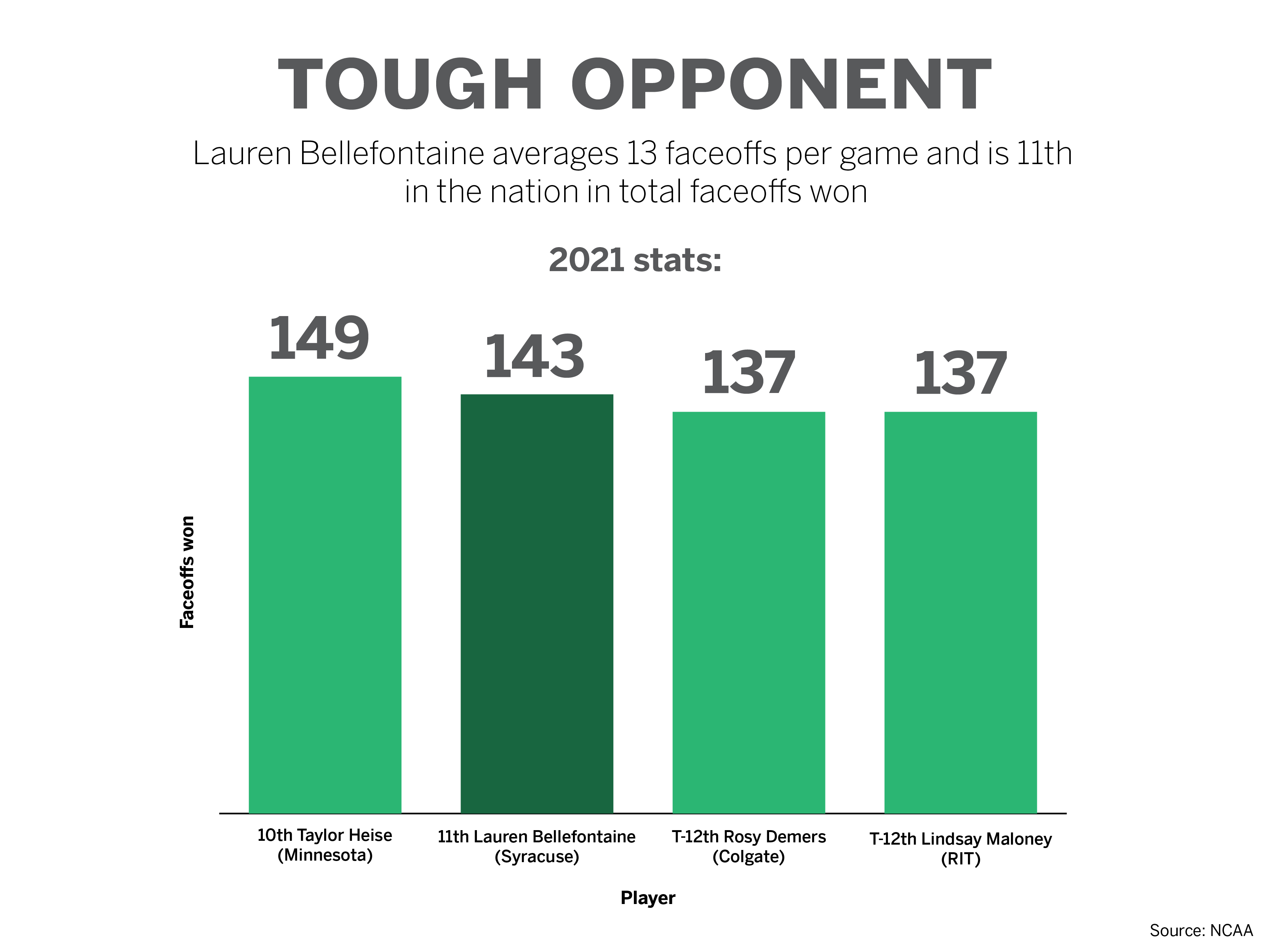 “Every time she was up against the left hand in the center, nine times out of 10, she would win it or at least neutralize them,” MacDonald said.

But Bellefontaine said that she could find an advantage regardless of the handedness of her opponent, using her strength with her backhand or forehand.

“If they’re on their forehand, and I’m going backward with my backhand, it’s way stronger than your backhand,” Bellefontaine said. “And then if they’re going on their backhand, I can just get right onto their stick.”

While MacDonald only saw this aspect from Bellefontaine at the junior level, it continued into her time at SU. On Oct. 12 this season against Union, Bellefontaine scored a goal as a part of the Orange’s dominant 5-0 victory over the Dutchwomen, securing Syracuse’s first win of the season.

Every time she was up against the left hand in the center, nine times out of 10, she would win it or at least neutralize them

She also went to the faceoff circle against left-handed Union forward Ashley Adams 12 times. Bellefontaine won 10 of those draws. Syracuse won 61% of all faceoffs against the Dutchwomen, and Bellefontaine finished with eight more faceoff wins against other Union players.

“Lauren typically goes up against the best centers on the other teams,” Flanagan said. “But she learns the tendencies of the opponent, and she’s getting the puck before it even hits the ice.”