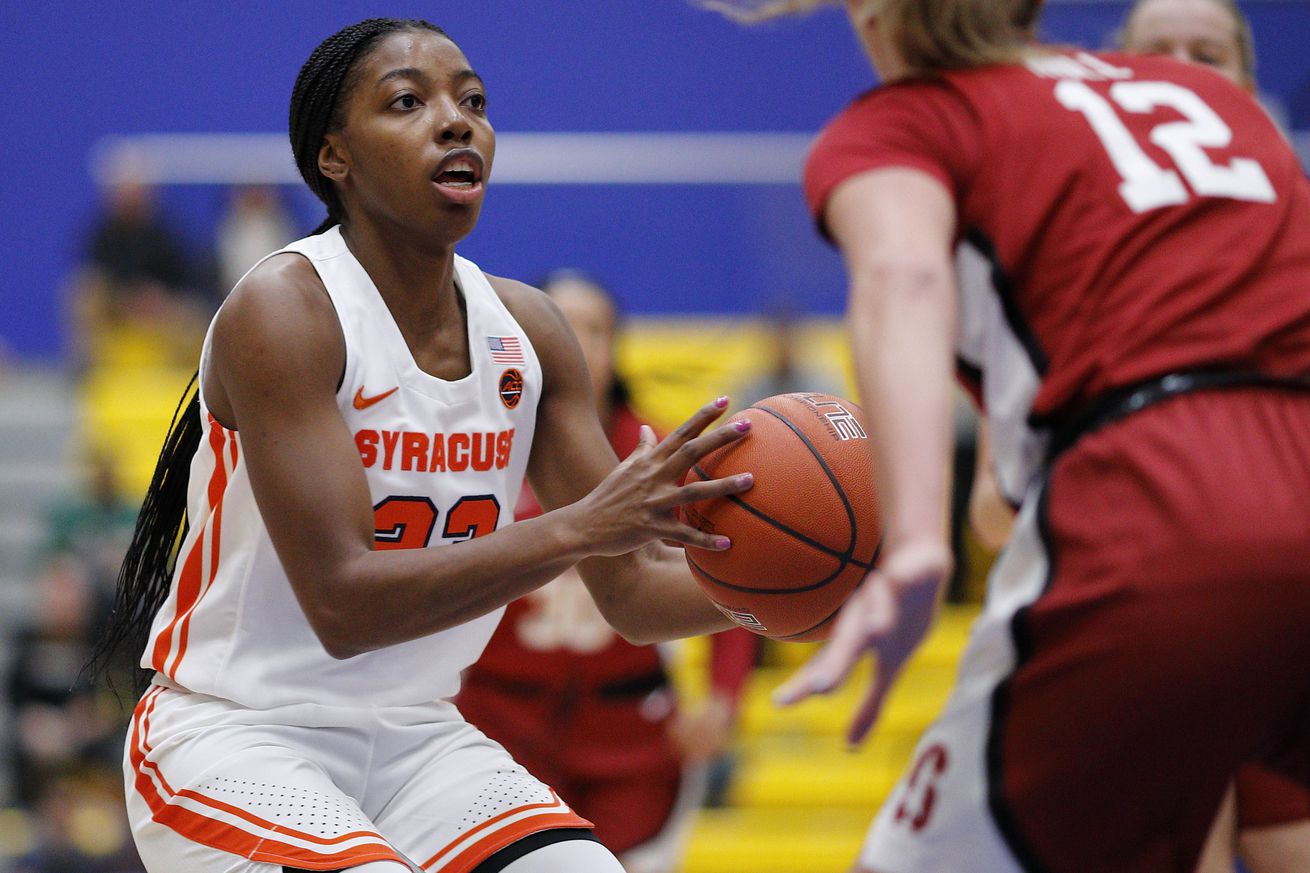 In 2017, Kiara Lewis was just a transfer waiting for her time to shine. Now, Lewis is one of the most important pieces of the Syracuse basketball puzzle.

Kiara Lewis arrived in Central New York in 2017 after transferring from Ohio State. Since then, she has become a leader on the court for Head Coach Quentin Hillsman and the Syracuse Orange women’s basketball team. Let’s take a look at her journey from the Red and White to the Orange and White.

Impressive Debut with the Buckeyes

Lewis appeared in every contest of her debut season and averaged 6.7 points and 1.8 assists in over 19 minutes per game. The Chicago native earned a starting role in the final 15 match-ups of the 2016-17 season.

At the end of the year, Lewis announced that she had entered the transfer portal. She decided to attend a nationally-ranked program and where her former AAU teammate Gabrielle Cooper was playing: Syracuse.

The following year, Lewis played the important role of Tiana Mangakahia’s backup. Mangakahia, an All-American, was the heart and soul of the Orange in 2018-19. When she was on the bench resting, it was up to Lewis to keep the offense moving.

Lewis showed flashes of top-level play when she was on the floor. Off the bench, Lewis averaged 8.4 points and 2.1 rebounds per contest. She recorded 13 double-digit scoring games and ranked second on the team in total assists (66).

Highlights of her first year playing for Syracuse included setting her career-best in points in back-to-back games. She tallied 16 points in a game versus Miami and then surpassed that mark with 20 points at Duke four days later. In that Duke game, the Orange were down by 11 in the third quarter. Lewis scored 15 points in that quarter to erase the deficit and help Syracuse capture the win.

In June of 2019, Mangakahia announced that she had been diagnosed with Stage 2 breast cancer and would sit out the upcoming season to undergo treatment.

Though at the beginning of Summer 2019 Mangakahia was the starting guard for the Orange, the idea of Lewis stepping up into the starting role wasn’t really a huge shock.

When the 2018-19 season ended, Mangakahia had an opportunity to enter her name in the WNBA Draft. Though she probably would have been selected into the pros, Mangakahia decided to finish out her college eligibility. Her diagnosis was heartbreaking news, but the concept of Lewis starting for the Orange the following season was already floating around.

The shoes left for Lewis to fill were big, but she showed that she can handle the pressure and excel.

Last season, Lewis earned multiple accolades including All-ACC First Team, All-ECAC Second Team, two-time College Sports Madness National Player of the Week, and Florida Sunshine Classic All-Tournament Team. She started in all 31 games for the Orange and averaged 17.6 points, 4.1 rebounds, and 4.9 assists in 37.7 minutes per game. She led the team in points (547), assists (151), and steals (54).

Lewis’ impact on Coach Hillsman’s system was evident. In her lowest scoring game of the season at Virginia, Lewis tallied just two points off 1-for-11 shooting from the field. As a team, the Orange recorded a season-low 41 points. On the other hand, Lewis had the mechanics to win games for ‘Cuse. Against Virginia Tech, Lewis recorded a game-high 19 points and hit the game-winning shot.

Lewis has come along way since her freshman year in Columbus. Now a graduate student, Lewis will return to Syracuse this fall for her final year of eligibility.

With Mangakahia back in the lineup, Syracuse could have the best backcourt in the Atlantic Coast Conference in 2020-21.