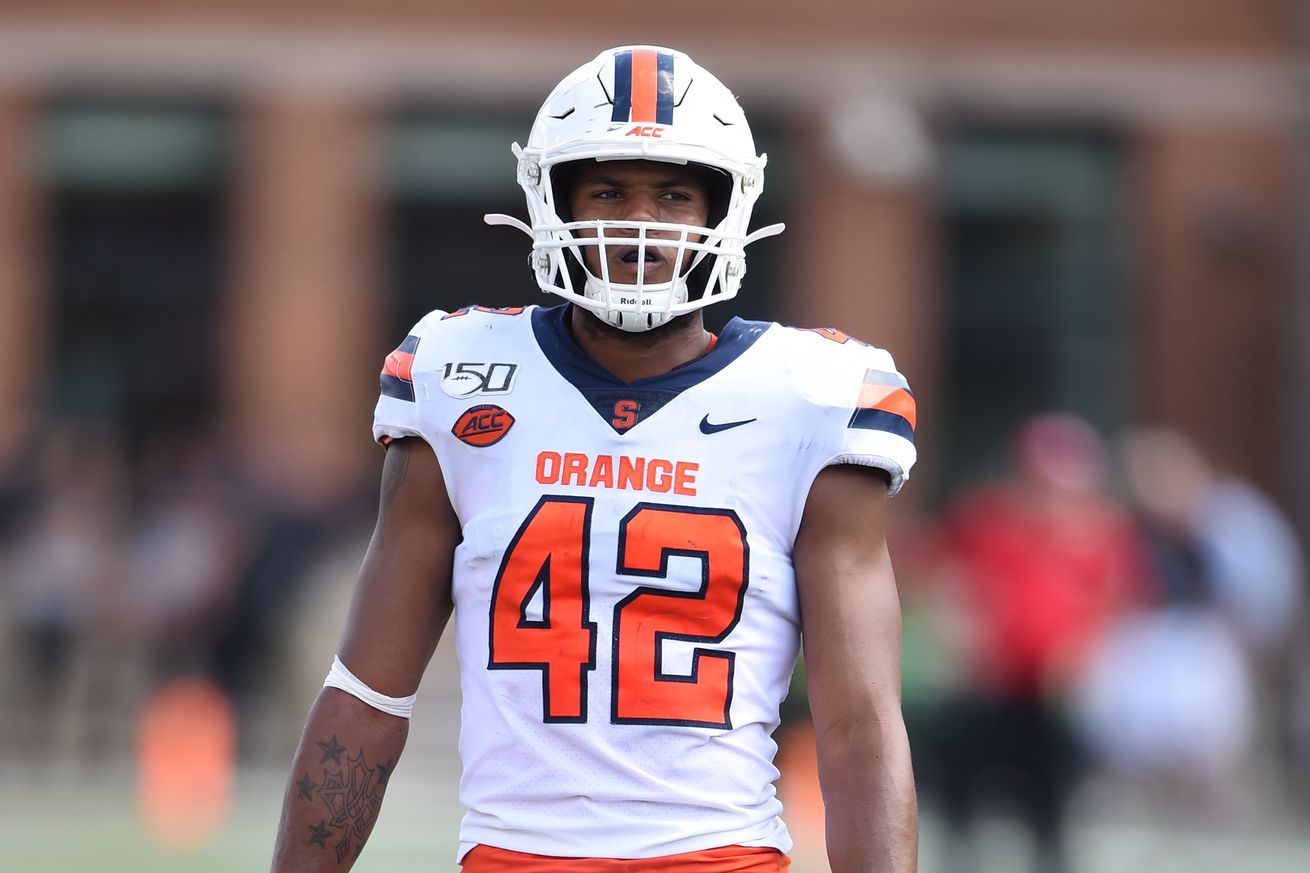 It’s a new and unique defensive era for Syracuse football. Who needs to step up in key roles?

You may have heard that the Syracuse Orange will play a 3-3-5 defense after the addition of new defensive coordinator Tony White (Steve covered this a bit earlier in the year).

And most of you are familiar with a traditional 4-3 or 3-4 defense. But the 3-3-5 isn’t that well known outside of the college game. Let’s take some time to highlight some of the important positions in the defensive scheme and who falls into those roles in this season’s depth chart

The nature of the 3-3-5 means that the primary attacking threat from the defense comes from the linebackers and the secondary. As such, the defensive line gets a vastly different role than in a traditional defense. The objective of the men in the trenches is to occupy blockers and draw double teams so that they can create gaps for the linebackers and secondary to attack the ball carriers or the quarterback. The nose tackle in particular needs to command a lot of attention as he can open up a lot of different lanes that the defense can attack through.

Williams can certainly fulfill that job as his natural frame means you have to pay attention to him or he will bully his way through the offensive line. You know that “Bear” is hungry to get back on the field after missing most of the 2019 season with a foot injury. While his stats don’t always fly off the charts, he’ll need to plug holes and create chaos so that defenses have to focus on him and get complacent about the other threats on the Syracuse defense. Speaking of those threats…

Who fits that typing more than Richards? His unique skillset makes him a perfect fit for the 3-3-5. We know he’s incredibly versatile and can be effective in coverage, but most fans – including me – are excited to see him rush the quarterback. Again, ideally he gets a mismatch or the blockers get clogged up focusing on other rushers. But the main philosophies of the new defense fit Richards perfectly.

One of the defining characteristics of the 3-3-5 formation is the consistent use of a nickelback, or a rover as defined in the 2020 spring depth chart. Syracuse is used to running a nickelback normally in their defensive formation after using the 4-2-5 last year. However, what makes this nickelback unique in the 3-3-5 is that he essentially becomes a 4th linebacker at times.

Soccer fans will be familiar with the “False 9” formation, where the main striker drops back a little more into the midfield and allows the wingers to push up the pitch more. The nickelback is the “False 4th” linebacker since he will be used often in the pass rush. He’ll also be one of the primary attacking threats along with the weak-side linebacker to opposing ball carriers. Of course his pass coverage abilities are very necessary, but his rushing abilities can’t be overlooked.

We’re used to one specific person fulfilling Syracuse’s role as their nickelback over the past couple of seasons. Trill Williams has performed exceptionally as SU’s nickelback and he’s rightfully earned a promotion as the primary cornerback for the Orange this season. Stepping into his shoes as Syracuse’s nickelback is Coley, who served as the first-choice backup at both safety positions last season. He’ll be looked upon to provide unique looks out of the secondary, whether as a rusher or a pass defender.

What do you think are the most important positions that contribute to the success of the 3-3-5? Who for Syracuse slots into those crucial positions? Sound off in the comments below.