Treanor and Kent, Jennifer’s daughter, coached at BC a year before. But when Jennifer saw Treanor and her daughter, she didn’t feel excited. She was nervous.

“There was a lot of stuff going on,” Jennifer said. “From just the build-up of the game and the significance of it.”

Jennifer remembered when she and Treanor prepared and strategized for opponents every day, and Treanor amazed Jennifer with her knowledge of strategies and offensive tendencies. These relationships helped Treanor become the coach she is, coming to a Syracuse program that complimented her coaching style.

Treanor made the coaches and players at BC better, which culminated in the Eagles’ 2021 national championship, Jennifer and Apuzzo said. And it was only because her alma mater called that she left, all because of the bonds she made in Chestnut Hill.

“So much of coaching is relationships,” Treanor said. “I was really fortunate when I was there to have great relationships with the coaching staff and also the players.”

Treanor’s relationships at BC first grew and expanded during talks of her coming to Chestnut Hill. The initial conversation to go to BC occurred in the Dome parking lot in 2017. Then No. 6 Syracuse and unranked Boston College played in the second round of the NCAA Tournament. Apuzzo, a player at the time, scored five goals in an upset win for the Eagles, who appeared in their first of four straight national championships since 2017.

Treanor, then an assistant for Harvard, was with her family walking back to the car when they ran into Boston College head coach Acacia Walker-Weinstein. According to Treanor’s father, Mark, she and Walker-Weinstein chatted about Treanor becoming an assistant offensive coach for the Eagles. Jennifer said the BC staff wanted Treanor even when she was playing at SU, which led Treanor to an interview, and eventually a role as the offensive coordinator.

At Harvard, Treanor started to form her coaching style. Harvard’s leading scorer from 2017, Marisa Romeo, said Treanor brought visualization to the team, something she learned from her time as a player under head coach Gary Gait.

Treanor showed players a certain move dodge. This was a new concept for the Crimson, but Treanor’s style was already established at Boston College, and the Eagles anticipated her arrival. Apuzzo said many players, herself included, watched Treanor growing up. 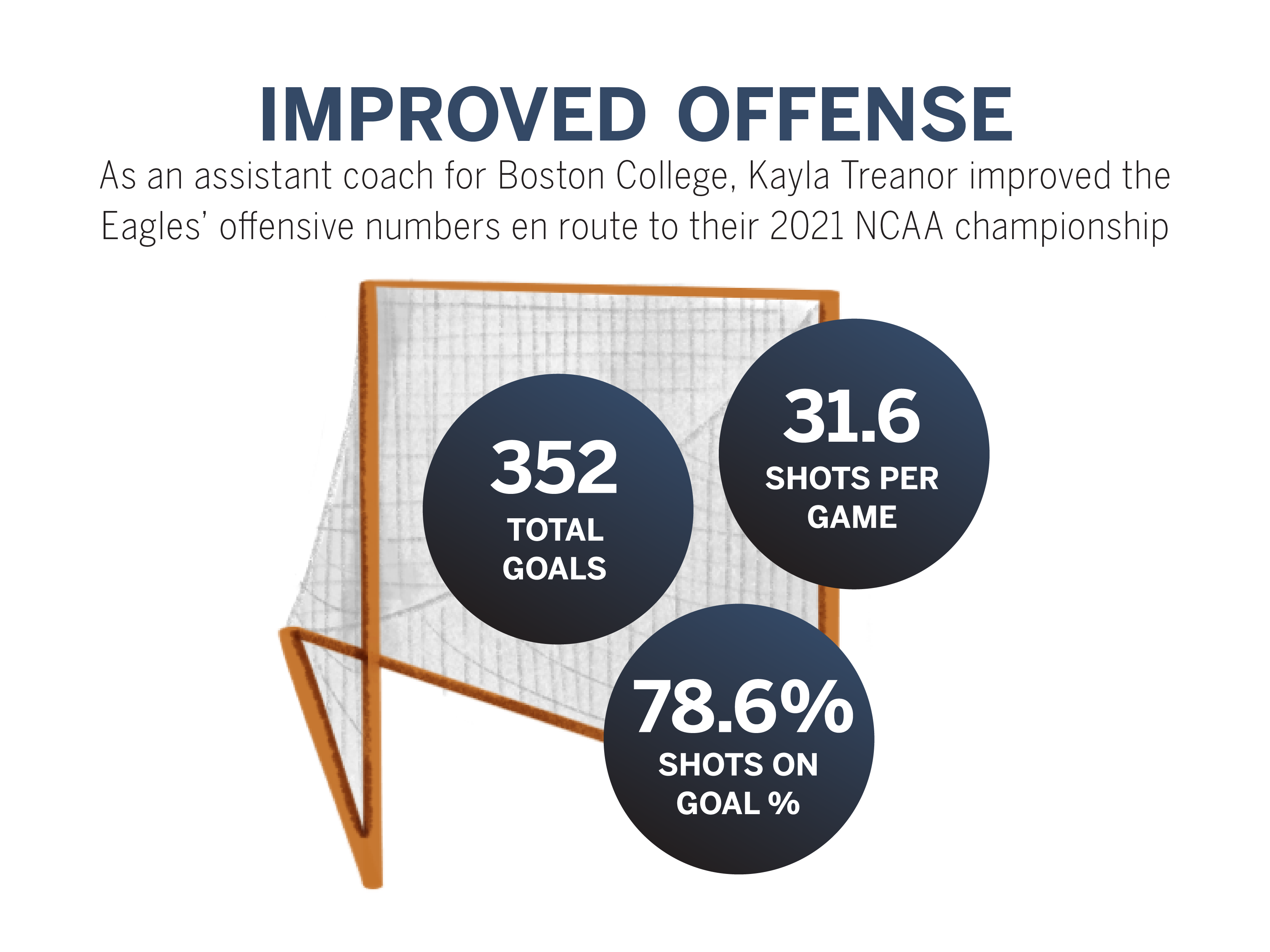 When Treanor first came to BC, she and Apuzzo focused on the draw, something she wasn’t specifically focused on before Treanor’s arrival. Treanor concentrated on getting the ball in places around the circle and learning how to defend against another draw specialist, Apuzzo said.

“She taught me a lot of different specific drawing techniques that I had not even known were a thing or could even be done,” Apuzzo said.

Apuzzo gained confidence on the draw, which improved her shooting and made the draw play more reliable. Treanor placed emphasis on Apuzzo’s left-handed shots, practicing together consistently. And in 2018, Apuzzo combined everything she learned to become BC’s first Tewaaraton award winner.

By that point, Apuzzo was a graduate assistant on the Eagles and remembered how Treanor’s coaching skills helped players in the crease. Treanor showed coaches and players how to attack defenders whenever they were in zone or man-to-man defense, Apuzzo said.

Jennifer also applied the same ideas to the Eagles’ defense. The defensive coordinator took what she learned from Treanor’s attention to detail in film study and applied it to her new position. Treanor’s mindset complemented Walker-Weinstein’s. Mark said Boston College, and Walker-Weinstein in particular, developed Treanor’s ability to see the game without getting caught up in details.

“Treanor learned a lot about management and how to talk to kids,” Mark said. “(Treanor and Walker-Weinstein’s) skills complemented each other and they were both smart enough to realize it.”

Treanor led BC to the 2018 and 2019 national championship, but the Eagles lost both. After every title game defeat there was constant self-reflection, especially when it came to individual matchups, Jennifer said. And in the 2021 National Championship game against SU, Boston College took advantage of one-on-one play.

On the first goal of the championship game, North sprinted from behind the net as Ella Simkins applied pressure. North leaned back to create space for a shot, beating goalie Asa Goldstock. North finished with a game-high six goals to fuel Treanor and BC to their first national championship.

Mark remembered the party after the game, where Treanor got to share her joy with the team. Treanor didn’t have plans to leave BC, but then Gait moved over to the Syracuse men’s lacrosse team. Treanor’s decision to leave was only because coaching her alma mater was something she couldn’t pass up.

“There are few places Treanor would have left Boston College for,” Mark said. “And Syracuse was one of them because it was home to her.”