With the Orange down by a goal in the 64th minute to then-No. 2 Pittsburgh in 2020, Deandre Kerr passed to Jeorgio Kocevski, who was standing outside of the penalty area. Kocevski was being defended intensely by Jasper Löeffelsend, but the midfielder shook off the Panther defender by performing a “Cruyff Turn” to move back from Löeffelsend. He used the inside of his right foot to perform the turn on Löeffelsend, setting himself up for a left-footed cross that curled perfectly towards Hilli Goldhar’s head. Goldhar found the back of the net, tying the game at 1-1.

“He’s been watching us play for many years, and to see him out there in one of our uniforms was awesome,” Syracuse head coach Ian McIntyre said of Kocevski. “Got an assist in his first college game … he’ll be better with that experience.”

Kocevski was credited with the assist, but his move to get Löeffelsend kept the attack and eventual goal alive. Those types of plays don’t show up in the box score, but it’s something that Kocevski has been doing ever since he began playing soccer. Through Kocevski’s first two seasons at Syracuse, he has scored two goals. The sophomore defensive midfielder has played 28 games with the Orange, averaging a shot per game.

Paul Valenti, coach of Empire United Soccer Academy’s U17 team, said during games his team would revolve around Kocevski’s play.

“There are playmakers on the field and there are role players, and everyone needs to know their role,” Valenti said. “I was very clear with my team to find Jeorgio.”

But Kocevski’s skills didn’t come naturally to him, his former coaches said. He was never the tallest or most physically gifted. The Liverpool, New York native had to become “the best practice player” Empire coach Rory Charcholla ever worked with. 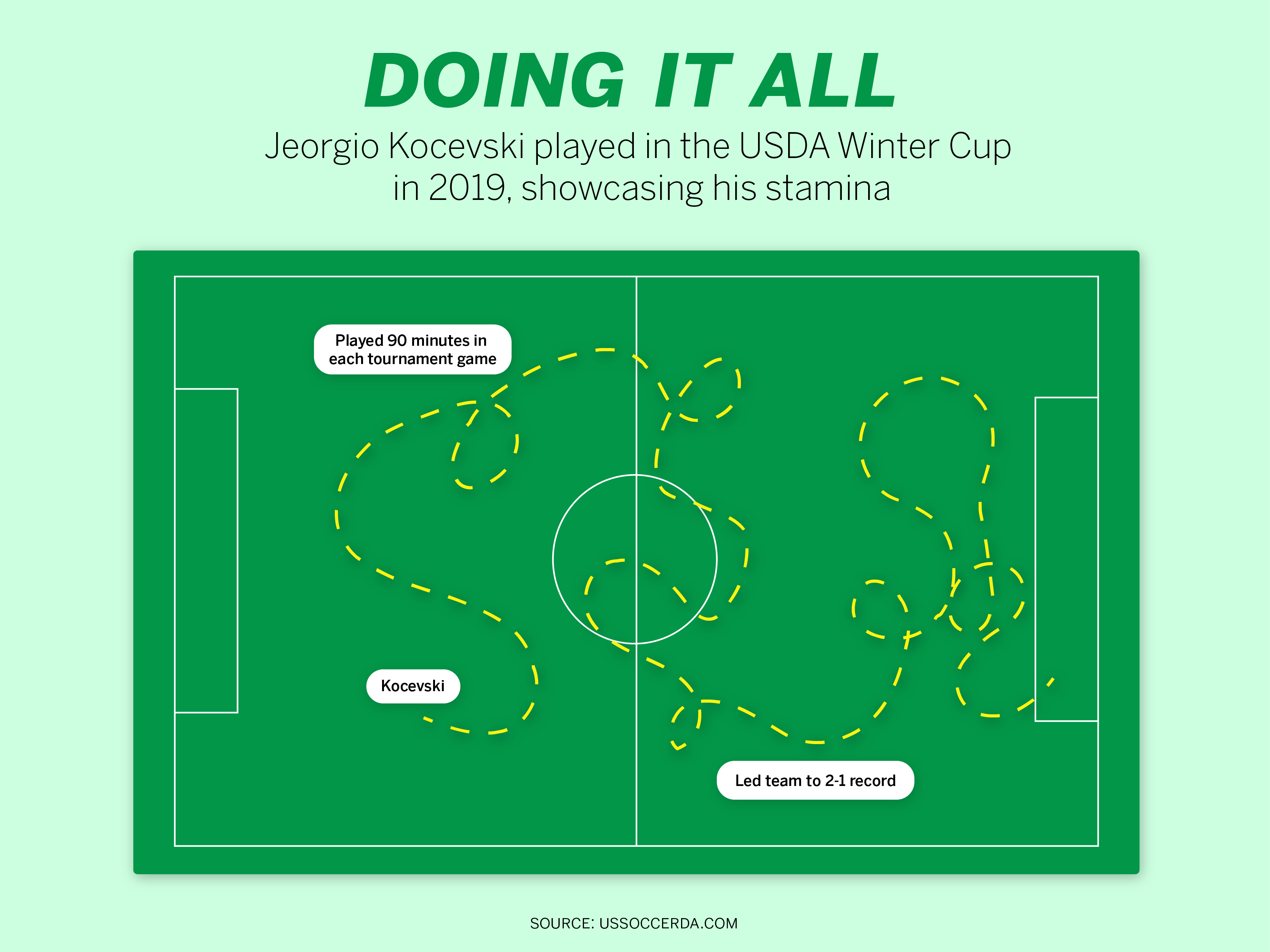 Michael Paolini, the director of soccer at Syracuse Development Academy, started coaching Kocevski when he was 9. Paolini remembers that Kocevski would always have a ball next to his feet and practiced in every training session like it was a match. Kocevski stood out to Paolini because he was so willing to focus on his game, particularly his ball control skills outside of practice. During this time, Paolini noticed the transformation to the player Kocevski is today.

“He went from, ‘I got to try to score goals and as many goals as possible’ to knowing how good he was on the ball,” Paolini said. “But now it’s a different level, it’s putting that together along with understanding where to find the pockets and feeding strikers or other midfielders.”

While Paolini would call Kocevski “CR7,” like Manchester United forward Cristiano Ronaldo, Kocevski grew into more of a facilitating role, rather than scoring one. While Kocevski was with Empire’s U19 team, Charcholla used him as a number eight, which in positional terms traditionally means a box-to-box midfielder who plays in the central midfield. But Charcholla said Kocevski doesn’t fit under that traditional label.

“He doesn’t have the power to go box-to-box,” Charcholla said. “He’s a conductor, and he continues to play a lot more with the ball.”

While it’s a position that will never put him center stage, Kocevski’s coaches were very much aware of his importance. He’s the “quarterback” on the pitch, his father Ile Kocevski said.

“He’s the one that moves the ball around and makes other people either score or create the next pass for the goal,” Ile said. “And I’ve always told him growing up, I told him ‘Don’t worry about scoring.’”

This style of play almost came out of necessity for Kocevski, Valenti said. Because Kocevski wasn’t physically gifted with height, he had to use his mind to get out of tough and tight spaces. Kocevski learned how to open the game up with passing and to close down defensive angles. Valenti believes that the less a player relies on physical abilities, the better they become as a soccer player.

Charcholla also said that Kocevski’s stamina is essential to his success. In the US Soccer Development Academy Winter Cup in Kansas in December 2019, Kocevski showed off his fitness, having to play three games in four days.

He went from ‘I got to try to score goals and as many goals as possible’ to knowing how good he was on the ball.

Kocevski played 90 minutes in all three of the games against MLS academy teams Portland Timbers U-18/19, Crew SC Academy U-18/19 and fellow club team Solar Soccer Club U-18/19. According to Charcholla, Kocevski ran over “12 and a half kilometers per game ” — equivalent to 23.1 miles over the three games. Empire won two games and lost one in this stretch.

Against Crew SC, an academy where Kocevski was denied entry, Empire won 3-0. In the eighth minute, Kocevski was key in setting up teammate Elhadji Sidibe’s opening goal by having a “second assist” like in hockey. On the final score, Kocevski came into the spotlight scoring the third and final goal off a penalty kick.

But Kocevski scoring goals is still not his normal role on the pitch. Ile remembers Kocevski’s play against Duke last month where his son didn’t show up on the box score in a 1-0 loss. Kocevki was integral in the Orange’s defensive performance, holding the then-No. 6 Blue Devils to eight shots. Ile saw that Kocevski was on the ball constantly and helped the Orange control the game for most of the 90 minutes.

In the first half, Kocevski faced pressure in the middle of the field from Amir Daley as he tried to keep SU’s possession. Kocevski invited the pressure, finding a streaking Colin Biros up the left side. His pass set up an Orange attack that included three shot opportunities that were all denied by the Blue Devils. While the attacks were unsuccessful, the second-year player was able to save SU’s possession and keep it on the attack.

“He just provides us a quality on the ball and a good decision maker,” McIntyre said. “I’m looking forward to seeing how our team kind of evolves around him.”

The post Jeorgio Kocevski shines in the spotlight of SU midfield appeared first on The Daily Orange.