No Syracuse player has ever taken more faceoffs in a single season than Jakob Phaup’s 419 this year. No player in Division I lacrosse has taken more this year, either.

And no SU player has taken on such a significant load — consecutively. As the Orange’s go-to faceoff specialist, Phaup took 401 straight draws this season.

“That is a crazy number,” said Jerry Ragonese, Phaup’s coach from The Faceoff Academy and a professional faceoff specialist. “To the people that know, that’s like bench pressing 900 pounds. People don’t do that, it’s not done. When it’s actually done, it’s on SportsCenter and everybody loses their mind.”

Phaup won’t come near the NCAA’s record-holder Brendan Fowler, who took 526 draws for Duke in 2013. Fowler had 21 games to post the record-breaking number, averaging 25.04 per game. Phaup had 14 games this season since the Orange missed the postseason, where he averaged 29.93 per game.

But for Phaup, the fifth-year specialist who played the final game of his career on Sunday against Notre Dame, this year’s workload was a significant increase. In 2021, he took about two-thirds of Syracuse’s faceoffs, splitting the other third with Danny Varello. This year, he took over 95% of them. 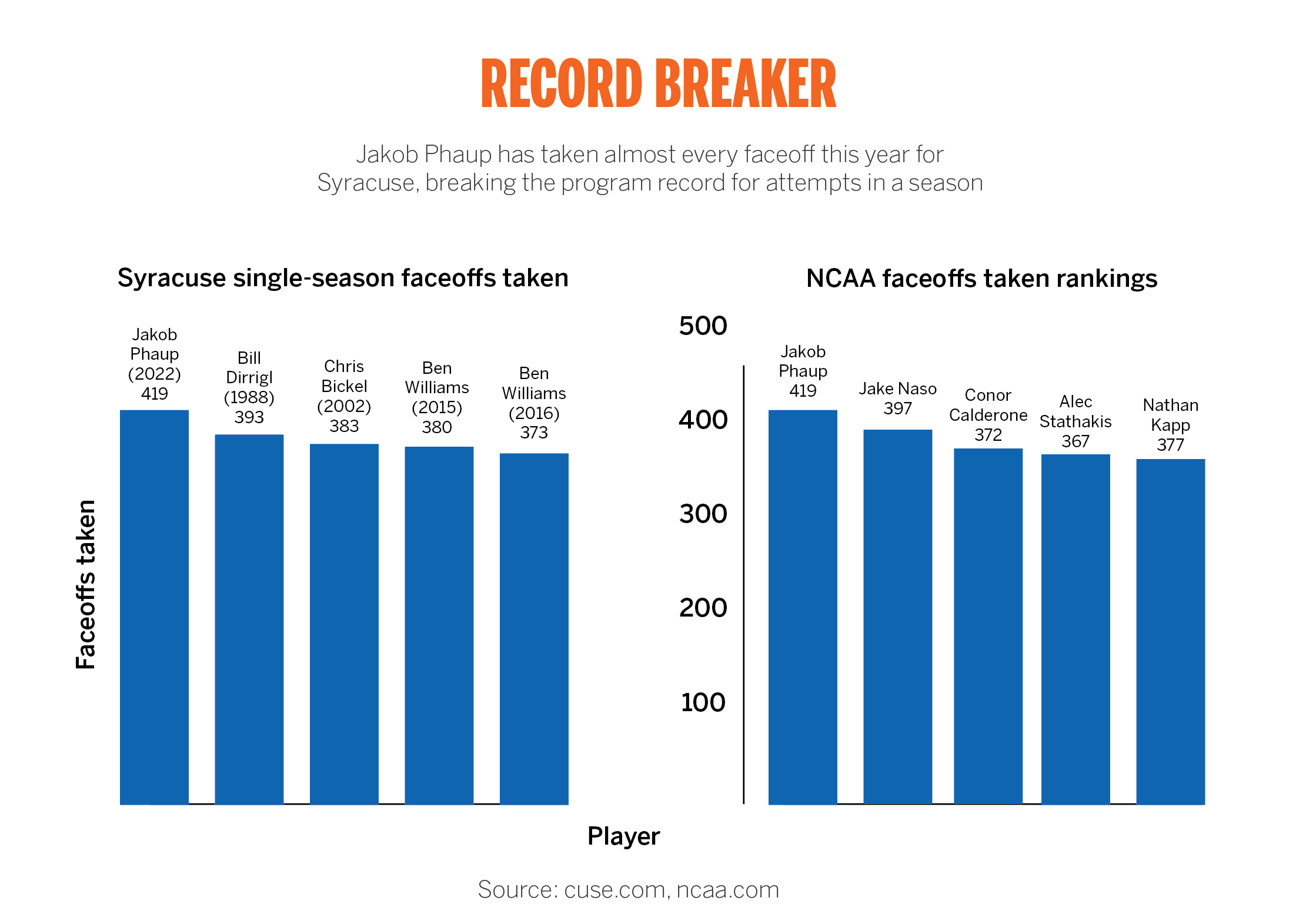 Phaup’s faceoff style is one that relies largely on countering, he’s said, meaning that he doesn’t often win the initial clamp and instead has to scrap for a loose ground ball or take it away from the opponent’s stick. That takes significantly more energy.

Yet Phaup made the increased workload look seamless. He’s tired after games but said he’s still been ready for each game day this season. And on top of that, both Ragonese and Syracuse volunteer assistant TD Ierlan say that Phaup had this season’s hardest faceoff schedule in the country. He’s remained durable through it all, head coach Gary Gait said.

“That is a Herculean effort,” Ragonese said.

Before the season, Gait was adamant that Phaup would be Syracuse’s go-to player at the X. In his previous seasons, the specialist split time with Varello, who has since graduated.

The group would take reps against one another for 10 minutes and then switch to a new opponent. Ragonese estimated they’d do between 200 and 500 repetitions during their two-hour sessions. That means Phaup got a whole season of reps every time he traveled to Philadelphia to train with them. 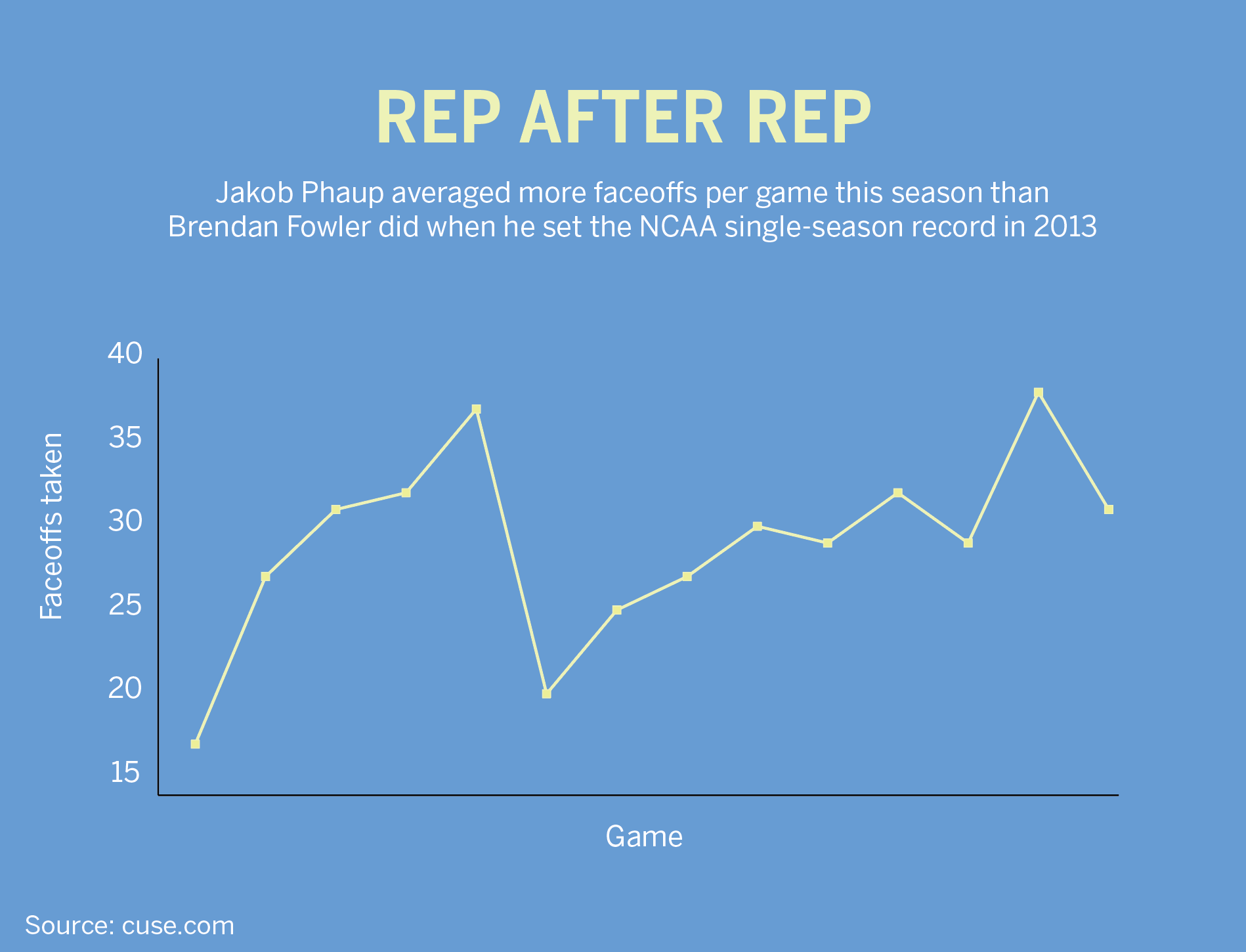 Ragonese said that doesn’t mean game days now are easy, but being in that “gravity chamber” means Phaup is certainly prepared. Ragonese remembered one session two days before Phaup returned to SU where the 35-year-old Ragonese said his hands hurt and he was tired. Ragonese wanted to take the day off, but Phaup was keen on practicing and convinced Ragonese to come anyway.

That willingness to “sit down and beat yourself up” is why Phaup has been so durable this year, Ragonese explained. He’s fundamentally sound yet smart with his body to get away from pressure, Ragonese said. That’s allowed him to stay healthy.

Phaup and Ragonese would also analyze film each week, and the coach said he’s sent Phaup particular video clips where he could conserve energy.

“I think his tires have lost some tread, but they’re not bald, that’s for sure,” Ragonese said ahead of Syracuse’s last game of the season.

Phaup took every faceoff rep but 19 of them, which came during Syracuse’s 28-5 blowout win over Holy Cross. That’s a huge compliment to Phaup too, Ragonese said, and shows how much Gait and the staff trust him. Now the future of the position will be in the hands of Jack Savage and Jack Fine. Phaup emphasized that both have quick hand speed, and the future of the position is “bright.”

And in terms of Phaup’s future beyond Syracuse, his stamina could translate directly to the Premier Lacrosse League, said Ragonese, a current PLL player. Phaup isn’t on analyst Paul Carcaterra’s top 20 draft projections from early April, though that could change ahead of the May 10 draft.

“The fact that he’s been that durable, I think, will prove huge at the next level,” Ragonese said.