arek Dolezaj hasn’t been on Syracuse’s Main Campus a single time this semester.

He lives in downtown Syracuse and practices in-person at Manley Field House and the Carmelo K. Anthony Basketball Center. He attends all of his classes online, avoids restaurants and bars and takes his dog for walks to pass the time.

The players are encouraged to only spend time with people who are tested for COVID-19 regularly and to never be in groups that exceed 10 people.

A semester of sacrifice was intended to help protect the entire team from contracting COVID-19. But the Orange found themselves with the same fate of dozens of college basketball programs looking to start up their season in coming weeks.

The program has confirmed two positive tests this week: One from an unnamed person and the other from head coach Jim Boeheim.

On Sunday night, Boeheim announced on Twitter that he had tested positive for COVID-19. At age 76, he’s considered to be at high-risk for complications, but he’s asymptomatic as of Sunday night. The positive test leaves the Orange’s head coach in quarantine, the team’s activities paused and the future of their season uncertain less than two weeks before it’s scheduled to begin.

“I’m confident we can pull it off,” Boeheim said at a press conference prior to his positive test. “But it’s not going to be easy. I think it can be done.”

Throughout this fall season, Syracuse football announced zero positive tests, even while a few Syracuse sports had matches and games canceled due to infections. Their relative success made Boeheim optimistic that the athletic department’s protocols could keep COVID-19 outside the program.

College basketball is facing the same reality as college football and all other collegiate sports: As cases rise across the country, the chance of athletes testing positive also increases, said David Larsen, an associate professor and epidemiologist at Syracuse. 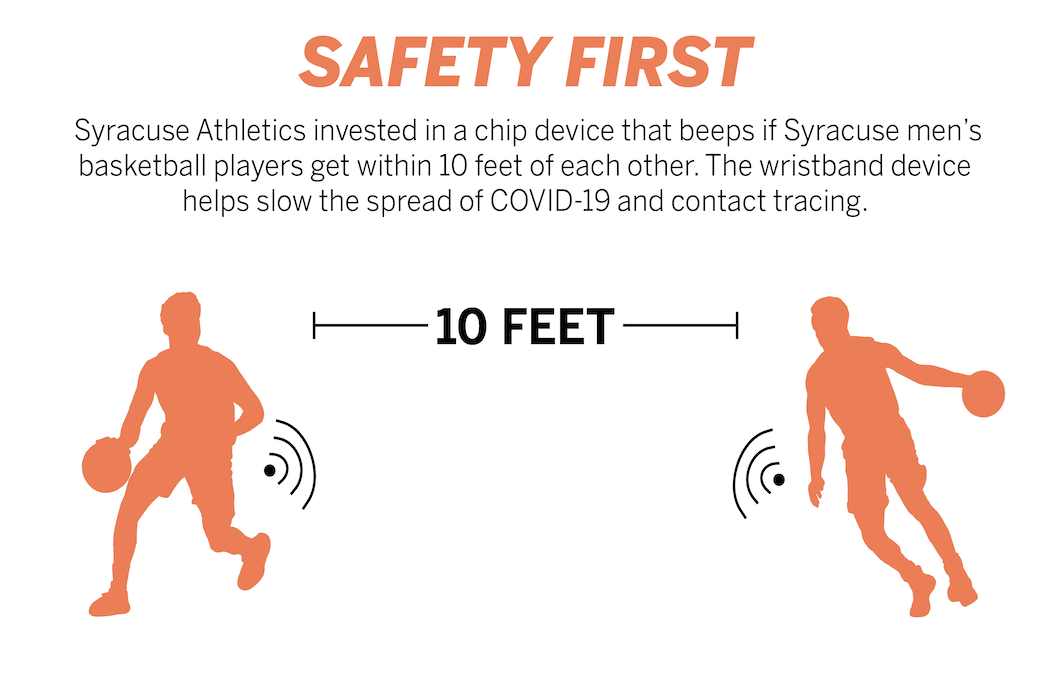 Dozens of programs around the country and within New York state have suspended their in-person activities before teams’ seasons have even begun. Miami and Stetson canceled their first scheduled game. In Syracuse, Division II Le Moyne pushed back its season-opener to mid-January, but the full team still doesn’t workout together to prevent the spread of COVID-19, head coach Nate Champion said.

“They’re just trying to stay in a bubble as much as we can so that we can play,” Boeheim said at the press conference. “Hopefully, that’s what will happen. We’ve been together for 16 weeks, and there’s been a lot of practicing. They’re ready to play.”

The Orange have taken multiple measures within their program to try to limit spread within their own pseudo-bubble of players, Boeheim said. He and the coaching staff wear masks at all times, and the players wear them around the facilities, except when practicing. Instead of normal practices, which consist of scrimmaging and full team activities, workouts are more limited in time and scope.

The players have designated spots to stand at before coming on the court. They space out 10 feet from one another for strength and conditioning, stretching and more individualized workouts. Team events, such as scrimmages, are limited to 10 minutes. In the locker room, the team is split into smaller groups so they can socially distance, Boeheim said.

“I just don’t think we have quite as much ‘umph’ in practice because you’re spaced out so much,” Boeheim said. “You have to imagine, if you look at our practice, you don’t see a player next to each other.” 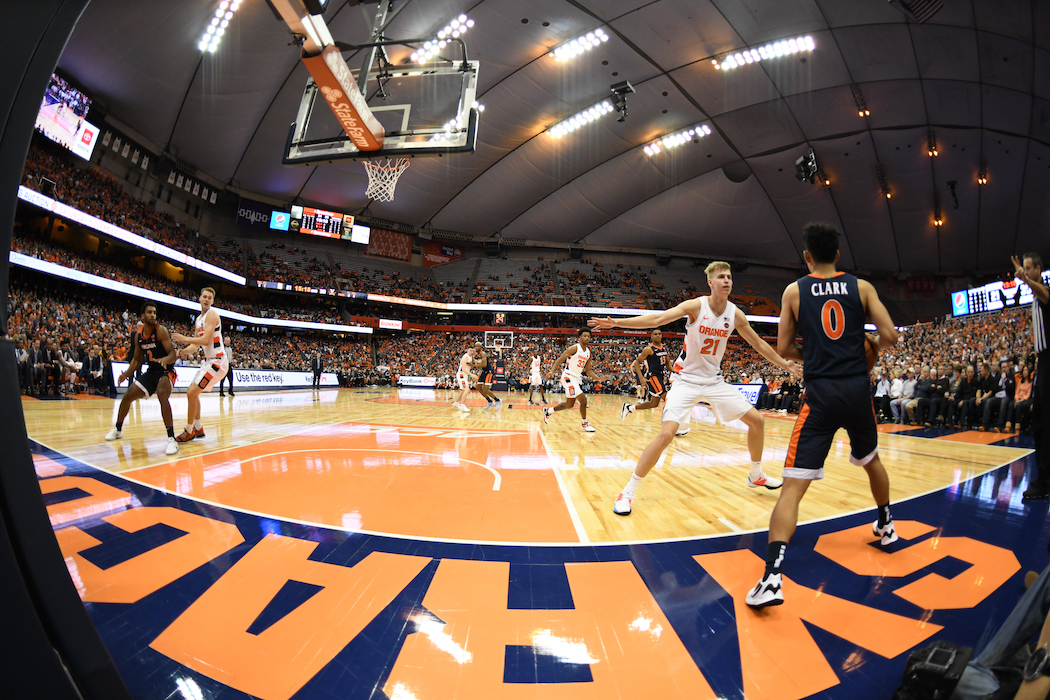 Head coach Jim Boeheim said the men’s basketball team has made many adjustments to practices and workouts to be more COVID-19 safe.
Max Freund | Staff Photographer

SU Athletics has invested in a new chip device that tracks the amount of time people spend around one another. If the players get too close, it beeps to warn them, Boeheim said. Tiana Mangakahia said the women’s basketball team utilizes the technology, too.

Larsen didn’t know the Orange were using the chips when asked, but he said the technology doesn’t really work because the virus is airborne. If a person with COVID-19 shared the same enclosed air space for a prolonged amount of time, the chip may not pick it up, he said. Despite social distancing measures, the virus can still spread.

The Orange use the chip technology so that, if someone does test positive, they can quantifiably tell how frequently the players were around one another and how often they came within six feet of each other. Now that Syracuse has multiple positives, the protocols will go into effect.

The Orange aren’t able to “test out” of quarantine, meaning that multiple negative tests won’t enable them to leave early. One positive test could mean that a player misses up to four games in a two-week period.

While Boeheim’s status is now in doubt for Syracuse’s season-opener against Bryant, games beyond that could be in even more danger.

Larsen is expecting a potential shutdown of New York state in December, after Thanksgiving, which he called “a disaster” for potential transmission between families. With the need and desire to see families, Larsen thinks that cases will only continue to rise into December.

Even as parts of Europe are heightening COVID-19 restrictions through stay-at-home orders and mandating the closure of businesses, many countries have chosen not to shut down sporting leagues. In the United Kingdom and France, there are new lockdowns in place, but the nation’s top soccer and rugby leagues are still playing without fans.

Larsen foresees a similar future for college basketball throughout the fall, where players are staying together, traveling together and being tested frequently. Boeheim the Orange are currently being tested once per week, and that will increase to three times per week once the season begins, Boeheim said. 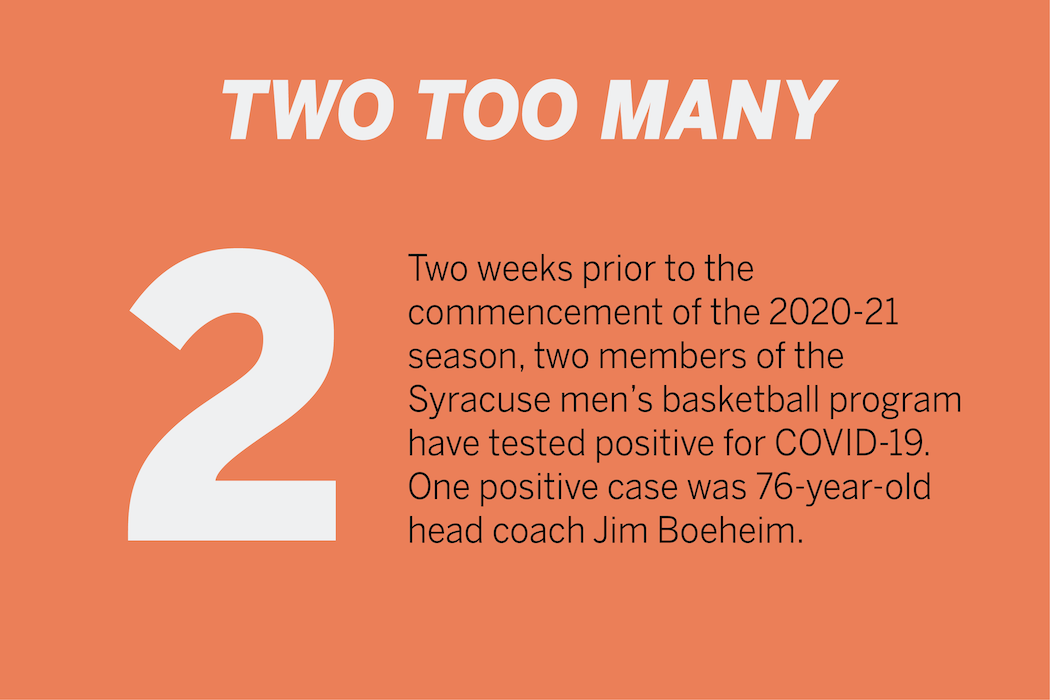 Multiple basketball coaches in the Syracuse area, including Boeheim, have commented on the mental health aspects of the pandemic. While the athletes are here to play basketball, the mental toll of not being able to attend social gatherings and see friends outside the team is weighing on college athletes.

“It’s exhausting,” Champion said. “Going in everyday and not knowing when you get tested, ‘could this be the week that we get shut down for a couple weeks?’”

As the fall semester ends and most students return home, the Orange hoped the window from now until Jan. 25— the start of the spring semester — would enable them to be more protected from COVID-19 while playing over half of their schedule.

But now, they’re one of many schools to run into COVID-19 spread within their programs. Boeheim’s positive test is the reminder that, though the college basketball season may begin, its future is fragile.