With year-round training and a large population, Southern California is a softball paradise. The region holds some of the best softball competition and talent in the nation, and players take advantage of the year-round sun to play around 150 games every year.

In recent years, Syracuse has taken advantage of Southern California’s massive talent pool. The Orange currently have six players from the region, including their only All-ACC selection from a year ago, Neli Casares-Maher.

The opportunity to earn significant playing time was a deciding factor in Breen and Ramos’ respective commitments, Will Loredo, who coached both players at Athletics Mercado, said. Breen is one of just three players to start every game this season while Ramos has played four different positions as a utility player.

Despite competition with other Power Five schools and local small schools in Southern California, Syracuse has a strong presence in the softball hotbed, said Greg Borzilleri who coached with Loredo at Athletics Mercado. Borzilleri and Loredo both highlighted strong relationships with head coach Shannon Doepking as a reason for Breen and Ramos’ commitments to Syracuse. 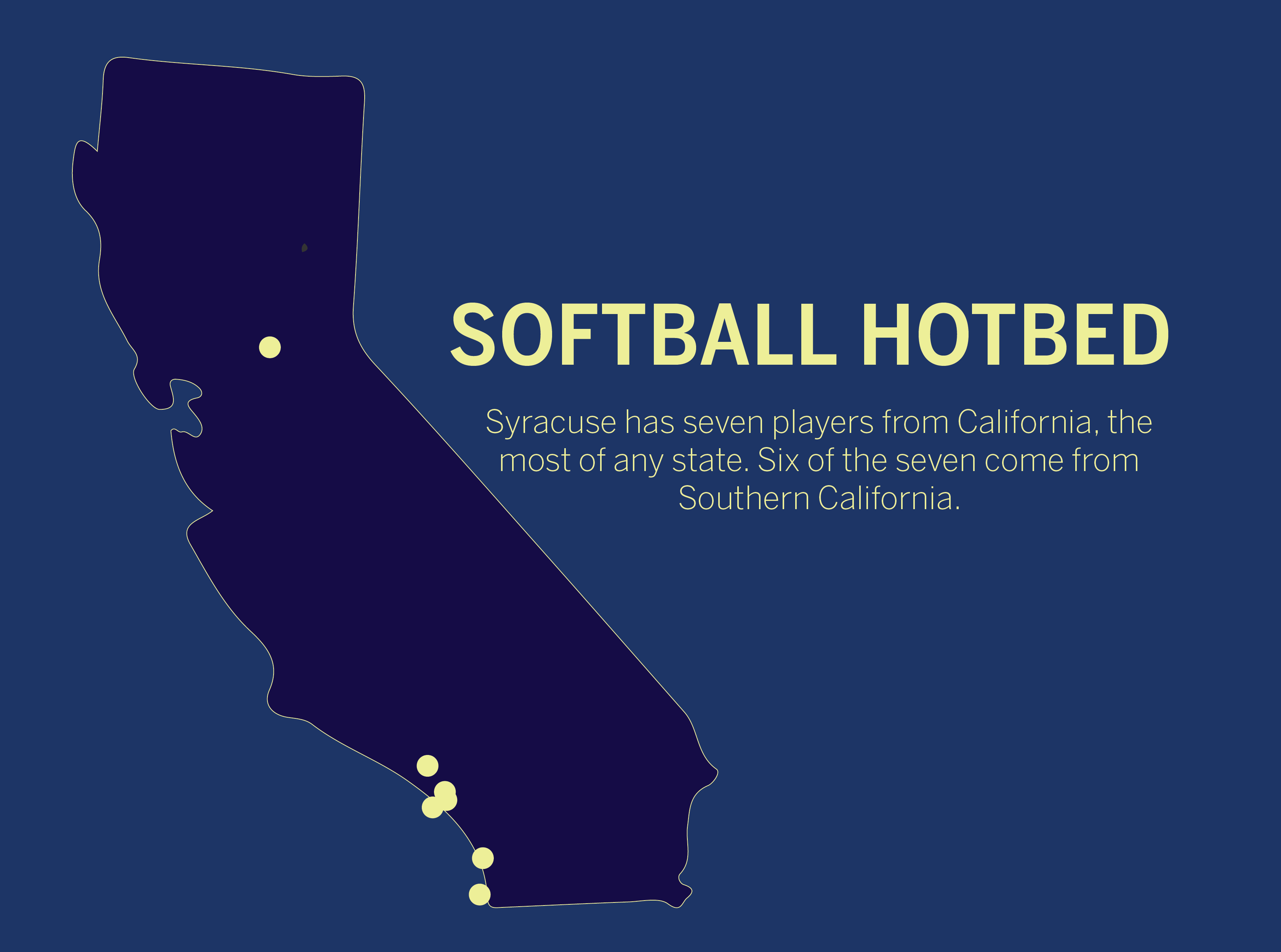 Breen and Ramos played together on Athletics Mercado for their first three years of high school and received nationwide offers, Loredo said. Athletics Mercado traveled to tournaments around the country to gain as much exposure from college coaches as possible. Borzilleri said the team travels out of state six or seven times a year to tournaments in Texas, Colorado and Florida, among others.

Breen had several offers across the east and west coast, but Syracuse expressed interest late in the recruiting process as she was prepared to verbally commit to a different school. Loredo said he believed that Breen initially looked at Syracuse partially as a favor to Borzilleri and himself, but she ended up forming a connection with the coaching staff and committed in November of her junior year.

Ramos, a San Diego native, had a lot of interest from local schools as well as a few other Power Five offers, but Syracuse made the most sense for her, Borzilleri said. Initially, Syracuse was not an option for Ramos, but once Breen knew Syracuse was looking for another infielder/outfielder, she “nudged” Ramos, Loredo said.

Ramos didn’t initially play for a club team as well known as Athletics Mercado, which resulted in her not getting as much recruiting attention, Loredo said. Bret Denio, the national director of Premier Girls Fastpitch and owner of Explosion Softball club, said that more players like Ramos have been slipping through the cracks in recent years for a variety of reasons.

Due to the extra year of eligibility many players took because of the pandemic, teams have overloaded rosters and don’t have the money to sign more scholarship players. The increased use of the transfer portal has also caused many elite teams not to recruit high school players, Denio said.

Denio said softball teams have also emphasized recruiting through their own camps, which prospective athletes have to pay for, as opposed to sending their assistant coaches on recruiting trips, which the program pays for.

One positive of more players going under-recruited is increased parity across the sport, Denio said, which can help schools like Syracuse secure talent that otherwise wouldn’t be available to them.

“We definitely know the programs that are around consistently. … There are other schools in the Northeast that don’t come out as much as, say, a Syracuse would,” Borzilleri said.

The post Inside Syracuse’s recruiting of softball-hotbed Southern California appeared first on The Daily Orange.