Trailing by four against the nation’s third-best team, Chrislyn Carr held the ball for a fraction too long.

Chrislyn couldn’t sprint her way into the paint and was double-teamed by Louisville, preventing a chance to get a 3. Instead, she heaved a desperate shot toward the basket that air balled out of bounds for Syracuse’s 18th turnover of the game.

Louisville called a timeout, and after a missed jumper, Olivia Cochran brought down her seventh rebound of the game and scored on the putback layup. The Cardinals went on a 9-0 run, preventing the Orange from picking up an upset win.

Syracuse (8-8, 1-5 Atlantic Coast) dropped its fourth consecutive game in a loss to Louisville (14-1, 4-0 ACC) on Thursday. Just 16 games into the post-Quentin Hillsman era of Syracuse women’s basketball, SU has already recorded its first four-game losing streak since the 2008-09 season, despite shooting nearly 50% from the field against the Cardinals.

“We shot 48% against Louisville — that’s really good,” acting head coach Vonn Read said. “We shot the ball really well and gave ourselves a chance in the fourth quarter. We just kind of wore down a little bit. Just couldn’t get those stops.”

Behind a 7-for-10 shooting performance, Chrislyn helped lead SU’s offense against one of the conference’s best defensive units. As the final seconds of the first quarter ticked off, she dribbled in place on the left side of the arc before taking off at full speed around the perimeter. She drew two Louisville defenders toward her before lobbing a pass over top to Christianna Carr, who hit a wide-open 3 with just over two seconds remaining.

Syracuse ended the first quarter within five points of Louisville. Similarly, four days ago, Chrislyn was responsible for the Orange’s one-point lead after the opening 10 minutes against Duke, letting the clock wind down before driving inside and hitting a mid-range jumper to give SU the lead.

Despite the loss, Syracuse overcame three-games’ worth of inconsistent offense from its starters. Chrislyn had been held to less than 10 points in the past three games for the first time since the Battle 4 Atlantis Tournament, and Christianna hadn’t made over two 3s in more than a month. But against the Orange’s toughest opponent of the season, Chrislyn hit three 3s and reached double digits by halftime. Christianna went 3-for-8 from deep, including the key 3-pointer that gave Syracuse its first lead of the game since the second minute.

With the Orange down seven in the late stages of the second quarter, Chrislyn sprinted inside and hit a mid-range jumper to tighten the lead. But Louisville went on an ensuing 7-1 run and quickly regained a double-digit lead.

That one point came from an Alaysia Styles free throw after former Syracuse guard Emily Engstler’s first personal foul of the game. But less than a minute later, Engstler’s foul total reached three. She fouled Christianna on a layup attempt and was then called for a technical foul for unsportsmanlike conduct, too.

That sent Christianna to the free-throw line for four uncontested shots. She sank all four, and with the four-point possession, Syracuse was back within seven points and trailed by just five at halftime.

“We caught a bit of a break there,” Read said. “It kind of gave the girls a little bit of strength, and we were able to close out the half and outscored them in the third quarter. We were right there.” 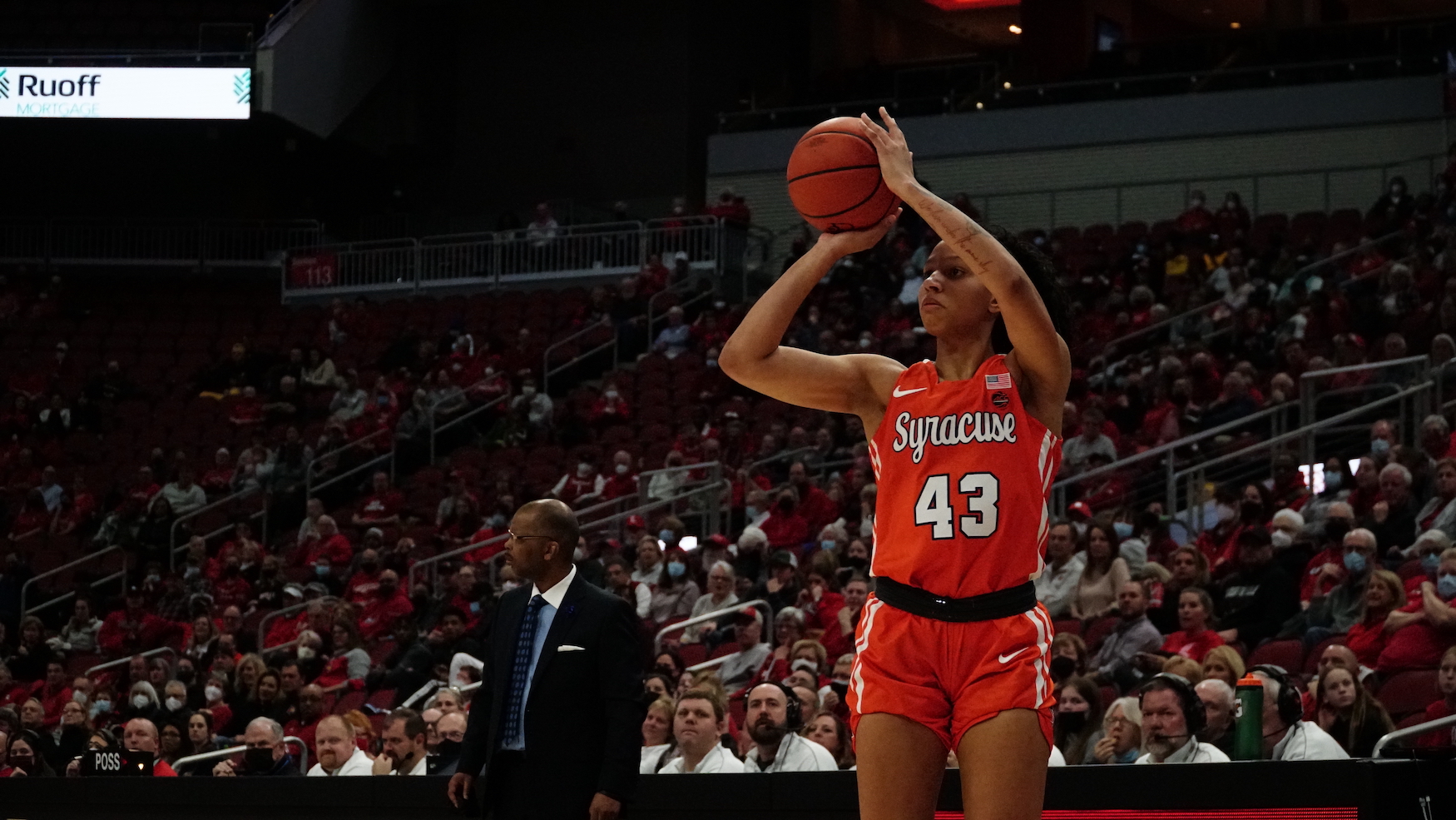 Syracuse hit over 47% of its 3-point attempts to keep the game close against Louisville. Courtesy of Syracuse Athletics

Between 2019-21, Engstler led Syracuse in rebounds and was consistently ranked inside the top 100 nationally in total and defensive rebounds, including a 286 defensive-rebound performance her sophomore season.

Engstler led the Cardinals with eight rebounds and five assists, allowing them to prevail for their 14th straight victory, and handing SU its fourth straight defeat. Engstler scored seven of her 15 points in the game’s final two minutes, where Louisville went on a 12-4 run to avoid a near upset.

But Engstler scored just four points in the first half and conceded two second-half turnovers, both of which SU capitalized on with points on the other end. In the third quarter, Styles intercepted Engstler’s pass in the paint and sent Najé Murray forward on the fast break. Murray paused at the key and found Christianna wide-open to her left. Sinking her third 3-pointer of the game, Christianna cut UL’s lead to 53-51 and cemented an 8-2 run for Syracuse.

But Louisville recorded seven 3s of its own to hold off the Orange. The Cardinals employed a similar strategy to Boston College, which rushed the ball into the paint and kicked it out to an open player on either wing, in order to exploit SU’s zone defense.

Louisville spread out Syracuse early on, with Kianna Smith receiving the ball in the center of the paint before quickly turning around to find Hailey Van Lith for an open 3 that gave the Cardinals the 5-3 lead. But with Louisville holding a one-point lead with just five minutes remaining in the game, Van Lith hit her first 3 since the one in the first quarter on a similar play. This time, Smith got the ball off an inside feed and found Van Lith wide-open on her left.

The Cardinals have yet to lose in regulation this season, and despite the loss, the game gave Read confidence that his group can compete moving forward in ACC play.

The post Improved offense not enough for Syracuse in 84-71 loss to No. 3 Louisville appeared first on The Daily Orange.