Ted Lasso hates tea. He thinks it’s “dirty, brown dishwater” and spat it out in Rebecca Welton’s office in the first episode of the comedy-drama series “Ted Lasso.” Unlike Syracuse men’s soccer head coach Ian McIntyre, Lasso hasn’t adjusted to the cultural drink since moving to England. McIntyre said he definitely drinks more coffee than he did at 18 years old when he came to the United States from England to play for Hartwick men’s soccer. But he still loves tea, as long as it’s made a certain way: tea bag first, then water, then milk.

“It’s not dishwater. I think it can be better. It does need to be with milk,” McIntyre said. “There are some things that need to remain.”

Two seasons of Apple TV+’s Ted Lasso have galvanized popular culture, aided by its Emmy nominations and Golden Globe-winning lead actor Jason Sudeikis. The show’s reach has made its way to Syracuse men’s soccer team, where many players have drawn comparisons between McIntyre and the fictional coach of the AFC Richmond soccer club, beginning with their path to coaching — Lasso grew up in America and coached in Britain, while McIntyre did the opposite.

“(Lasso’s) really good at building relationships with his players. McIntyre’s a great communicator and the guys understand him really well,” senior Hilli Goldhar said. “He makes an effort to build good relationships with us. I don’t think there’s a coach who works harder than McIntyre in the Atlantic Coast Conference, even in the country.”

Lasso intertwines life lessons with jokes he drew from his time in Kansas coaching American football. McIntyre frequently tells jokes, too, but he said he doesn’t think he’s gotten any funnier during his tenure with Syracuse. Midfielder Luke Biasi sees a great deal of Lasso in McIntyre, at least in terms of relationship building. Sometimes no one laughs when McIntyre cracks one, Biasi said. Sometimes they do.

Like Lasso, McIntyre uses sarcasm, a form of humor McIntyre’s grandmother told him was the “lowest form of wit.” In a meeting with Roy Kent, Lasso heavily leans on sarcasm when pitching the idea of Kent returning to the team as a coach rather than a player to ease the angry character’s attitude. For teams that spend a lot of time together, however, McIntyre and Lasso agree that the head coach is responsible for creating an environment where everyone enjoys one another’s company.

In the show, Lasso’s first goal when he took over the fictitious AFC Richmond English Premier League team was to do just that. He worked tirelessly throughout the first part of season one to improve assistant coach Nate’s confidence, turn star player Jamie Tartt’s narcissistic attitude into one conducive to a team and help player Sam Obisanya believe in his abilities. McIntyre’s team has never gone out for karaoke or shared a birthday cake in the locker room after a loss like the show, but his goal has always been to recruit and surround himself with good people to offset the grind of college soccer.

McIntyre also enjoys that Lasso isn’t just concerned about wins and losses. Sure, Coach Beard screams at him at the local bar in an attempt to get Lasso to understand that relegation is the worst thing that can happen to an English soccer team. Once Lasso’s team begins to gel, they begin winning, counteracting their demotion from the Premier League.

“As we go on this journey, we know that there’s more than winning and losing, but you can also have success if you create an environment,” McIntyre said. “We are teachers, we’re mentors, we’re support systems for our guys.”

If at the end of the day, we can all become a little bit better as coaches, but as human beings, maybe they’ve been on to something

McIntyre doesn’t have facial hair like Lasso’s iconic mustache, but McIntyre grew out a goatee once in college, which led to a superstitious winning streak for Hartwick. As captain, McIntyre said he looked like a “European musketeer looking dude,” but retroactively, he didn’t pull it off. McIntyre doesn’t use the word ‘believe,’ and he definitely doesn’t post it in the locker room. And he hasn’t drank during the last 15 soccer seasons. Unlike Lasso, he saves his Carlsbergs, Kronenbourgs, Peronis and Heinikens for after the season.

But McIntyre tries to help his coaches like Lasso does. Assistant Coach Jukka Masalin, like Coach Beard, has been by McIntyre’s side through the ups and downs of his lengthy coaching career. Coach Nate rose to take over his own soccer club in the show. Sean Lawlor joined McIntyre’s staff as a volunteer, and now he’s an assistant coach and third in command — like Nate.

McIntyre also experienced some of the same cultural differences that Ted Lasso experiences throughout the first two seasons. The typical tea-and-beer drinking, loud Englishmen was nailed perfectly by characters in the show, McIntyre said. Both coaches have had their share of strange looks from family and friends because of their accents. But that’s part of the show, part of the appeal that draws McIntyre and others to keep coming back. 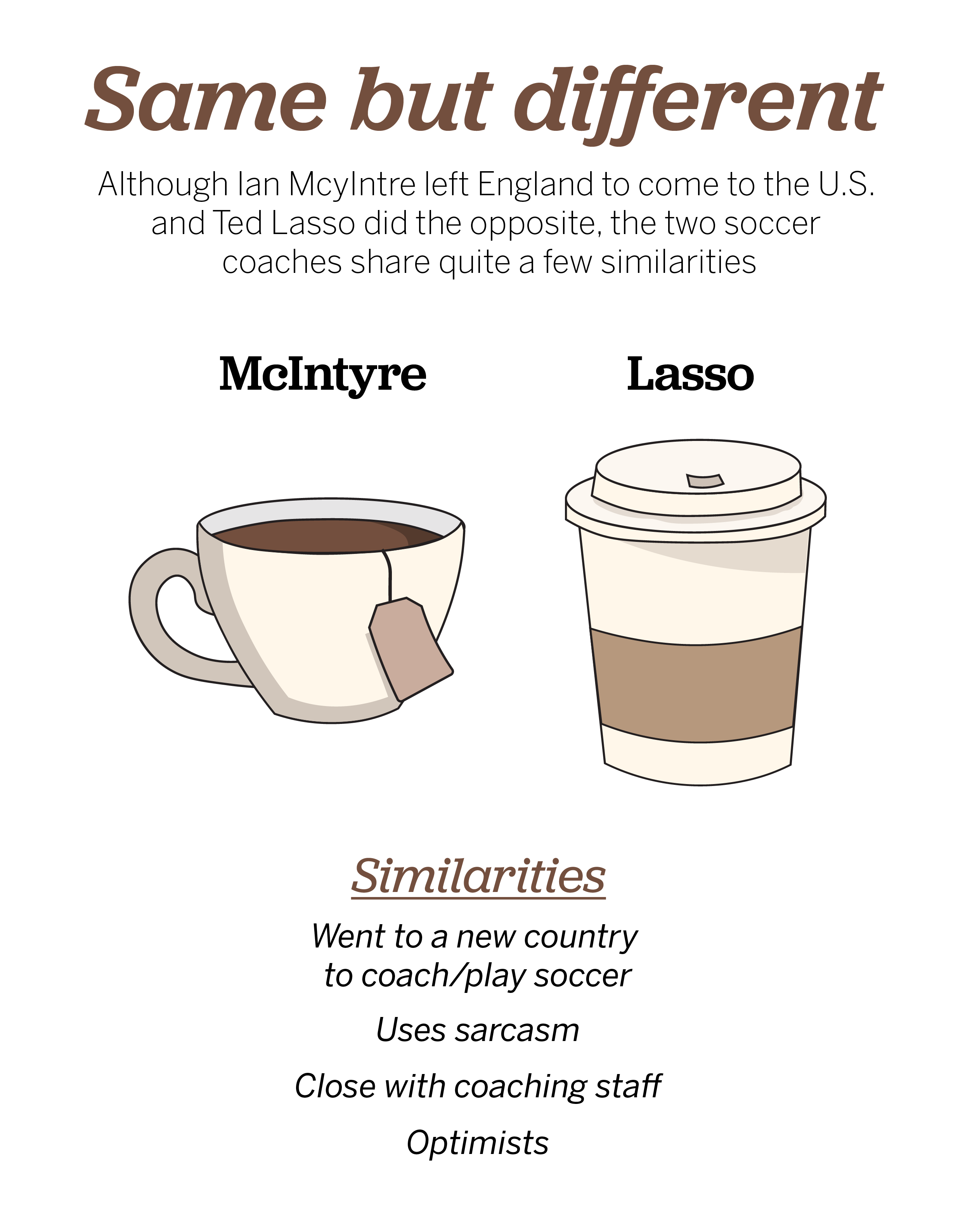 “It doesn’t matter where you’re from,” McIntyre said. “The funny moments are eclipsed by the moments you feel good about other people.”

Those real moments are what makes the show work, McIntyre said. Lasso is a guy with a failed marriage who doesn’t see his son. His team got relegated, and he frequently has panic attacks spurred by the death of his father. But that is life, McIntyre said — you embrace the challenge of the day and try to become better for it.

McIntyre thinks that Lasso’s belief is exactly what the world needed. “If at the end of the day we can all become a little bit better as coaches (and) as human beings, maybe they’ve been on to something,” McIntyre said.

McIntyre might know more than Ted Lasso about soccer. He might like tea more than the fictional British football head coach and he might not be able to grow a solid mustache. But he’s an optimist.