Zach Mercado was ready to pick up the phone starting at 11 p.m. central time on Aug. 31. The revised recruiting contact period opened at 12 a.m. eastern time on Sept. 1, and Brown, Towson and Binghamton texted him within minutes. But Mercado was still waiting for Syracuse, his No. 1 school. Unsure of which time zone the Orange would go by, he decided to go on a three-mile run when a call hadn’t come by 11:45.

The Austin, Texas, native never had stars under his name on his Inside Lacrosse profile. Instead, the unranked recruit emailed college coaches his highlight tapes, with his mom, Julia, hovering to ensure he added specificities to each message.

The truth was Mercado wasn’t sure if a call would come. His Iron Horse Austin coaches, former Syracuse players Dom Fin and Luke Cometti, relayed SU’s interest in him, but at showcases, he didn’t have a throng of college coaches watching him.

After Mercado returned from his run at 12:30 a.m., he was preparing to go to bed when his phone rang. Mercado started “jumping around” when he saw the “Syracuse, NY” location listed below the number, but did his best to answer the phone calmly. It was defensive coordinator Lelan Rogers telling him they’d like to talk to him again on Zoom the next day to talk about his future at Syracuse.

“It was important to me to tell them that, right when they called that night, to say I’m heavily interested,” Mercado said. “There’s no need to look around to fill my spot.”

He became Syracuse’s first class of 2022 verbal commit on Sept. 2. No other 2022 recruit verbally committed until a week later. Since, Mercado has been joined by 11 others, including three five-star recruits, and is the first-ever Syracuse recruit from Austin.

Mercado began playing lacrosse in third grade because his then-flag football coach in middle school told the players they needed to find an offseason sport to stay in shape.

He still enjoyed football, but lacrosse offered a creative outlet. In practices with the Texas Heat — and then Marquee when the club folded — he could play around with behind-the-back shots, around-the-world passes and Indian pickups.

Initially, Mercado wanted to be a faceoff specialist. They start on the field, and Mercado hated waiting for his team to get the ball before he could come on. But taking faceoffs warps the stickhead, making it difficult to shoot using the same stick, and after going through five or six heads over two years, his dad asked him to make a decision.

“You really think you’re gonna make it facing off, or can I stop buying heads?” his dad asked.

Mercado didn’t want to limit himself. He transitioned to midfield, and has been there since.

As early as sixth grade, Mercado started traveling out of the state for lacrosse camps and showcases. In comparison, he only played football for his high school, and still had a recruiter reach out earlier this year about playing in college. 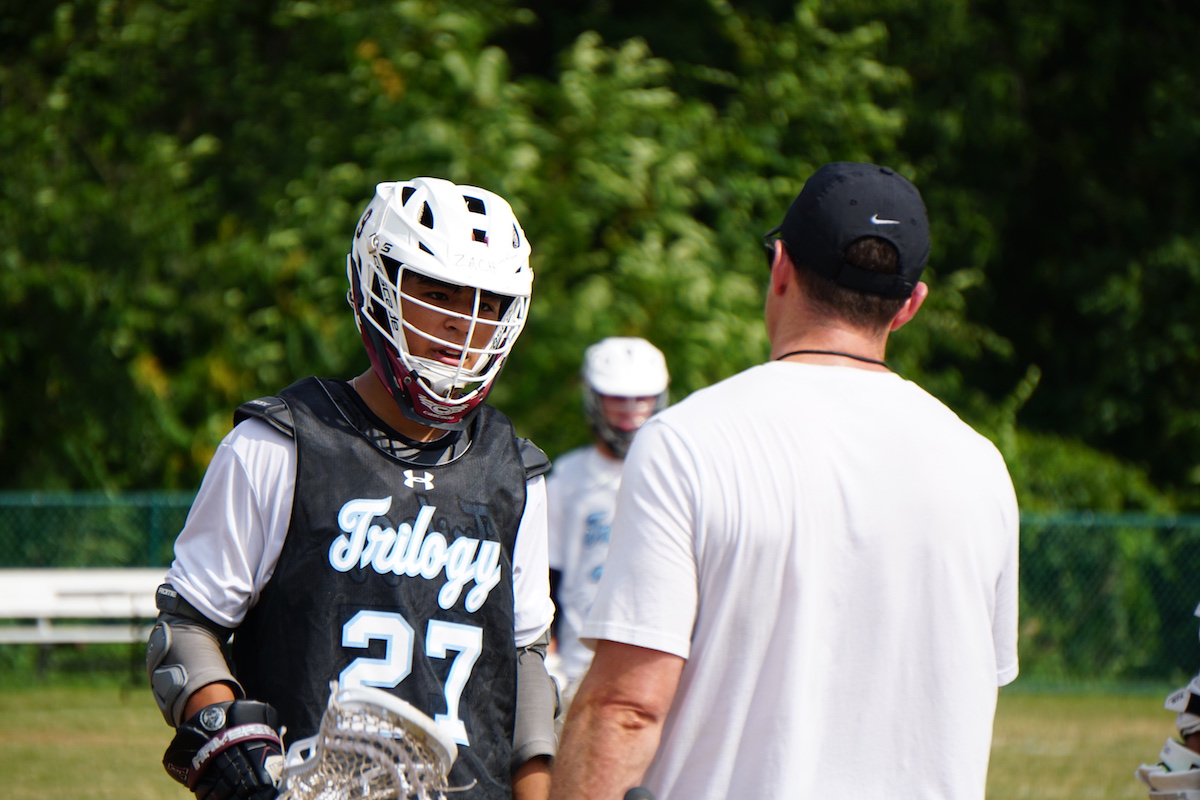 Mercado balanced lacrosse and football during high school, though lacrosse was his main focus. Courtesy of Mitch Belisle

Going into his freshman year, lacrosse was Mercado’s primary sport. He told his football coach he would only play the sport for a season, but when he moved up to varsity midway through his freshman year, that swayed him enough to stay a dual-sport athlete, his mom said.

Football helped Mercado gain aggression and size. His mom used to ask him why he was always “on the floor” during lacrosse games, but the 20 pounds he gained during football training between eighth and ninth grade changed that.

“I’m not getting knocked around anymore,” Mercado said. “I can deliver some blows too.”

Mercado struck a balance between the two sports. Despite Mercado being a varsity player, his football head coach allowed him to play with the JV or freshman team on Thursday nights so he could fly out at 6 a.m. on Friday for lacrosse. Because he missed weekend football film sessions, he would make those up during lunch next week.

Since sixth grade, Mercado attended Trilogy Lacrosse camps coached by former Cornell D-man Mitch Belisle. As he was named an all-star in 2018, he was invited back for a nine-day ‘ICE’ program, which Belisle described as a sort of national team. Because all the 2022 slots were filled up, Mercado played with 2021 recruits. Mercado and Tennessee-native Eli Bowen were Belisle’s most-trusted middies.

Before Mercado worked with Belisle on defense, he would try to read the opponent’s face and body. Belisle taught him to focus on hips. “You don’t go anywhere without your hips,” Mercado said after.

Offensively, Belisle pointed out that Mercado dragged his stick after dodging past defenders, leaving him susceptible to long-poles recovering and knocking the ball away from behind. Mercado now keeps his stick in front of him and is working on a more deceptive shot.

Syracuse coaches told Mercado that he’ll play a more defensive role, at least early on, because of his ground ball abilities, speed in transition and powerful shot, Belisle and Jordan Ruggeri, said his high school head coach. Given his coachability, it wouldn’t be surprising to see Mercado earn a larger offensive role as well, they said.

On that Sept. 2 Zoom call, Mercado and Julia sat down with all three SU coaches. The youngest of the trio, offensive coordinator Pat March spoke the most, and the two connected well, Mercado remembered. Within hours, he announced his commitment to Syracuse via Twitter.

“It’s not hard to say yes to Syracuse because that doesn’t happen every day,” Julia said. “People are like, ‘Why did he commit so early?’ I mean, how do you turn down Syracuse when you’re an unknown kid from Texas?”

On recruiting pages, Mercado still doesn’t have stars beside his name. But now he’s got a big block “S” instead.