The Syracuse Crunch were in the middle of the second period against the Utica Comets when Jim Sarosy found out the sports world was coming to a halt.

Sarosy, the Crunch’s Chief Operating Officer, was at Utica’s Adirondack Bank Center on March 11, 2020 alongside the Tampa Bay Lightning’s general manager, Julien BriseBois. The Lightning have been the Crunch’s NHL affiliate since 2012. The two got word that the NBA’s Utah Jazz stopped their game early due to COVID-19 concerns. Sarosy was unaware how this would affect the Crunch.

After the final buzzer, Sarosy made the decision to leave the game by himself, rather than on the Crunch’s bus. But not even 10 minutes down the road, Sarosy received an urgent call from BriseBois, asking him to pick him back up from the arena. BriseBois and the Lightning closely followed the Jazz during their recent road trip, and the Tampa Bay GM was concerned he could have spread COVID-19.

“We called our team and staff in the next day and then simply sent everyone home,” Sarosy said. “Originally it was going to be for the weekend.” 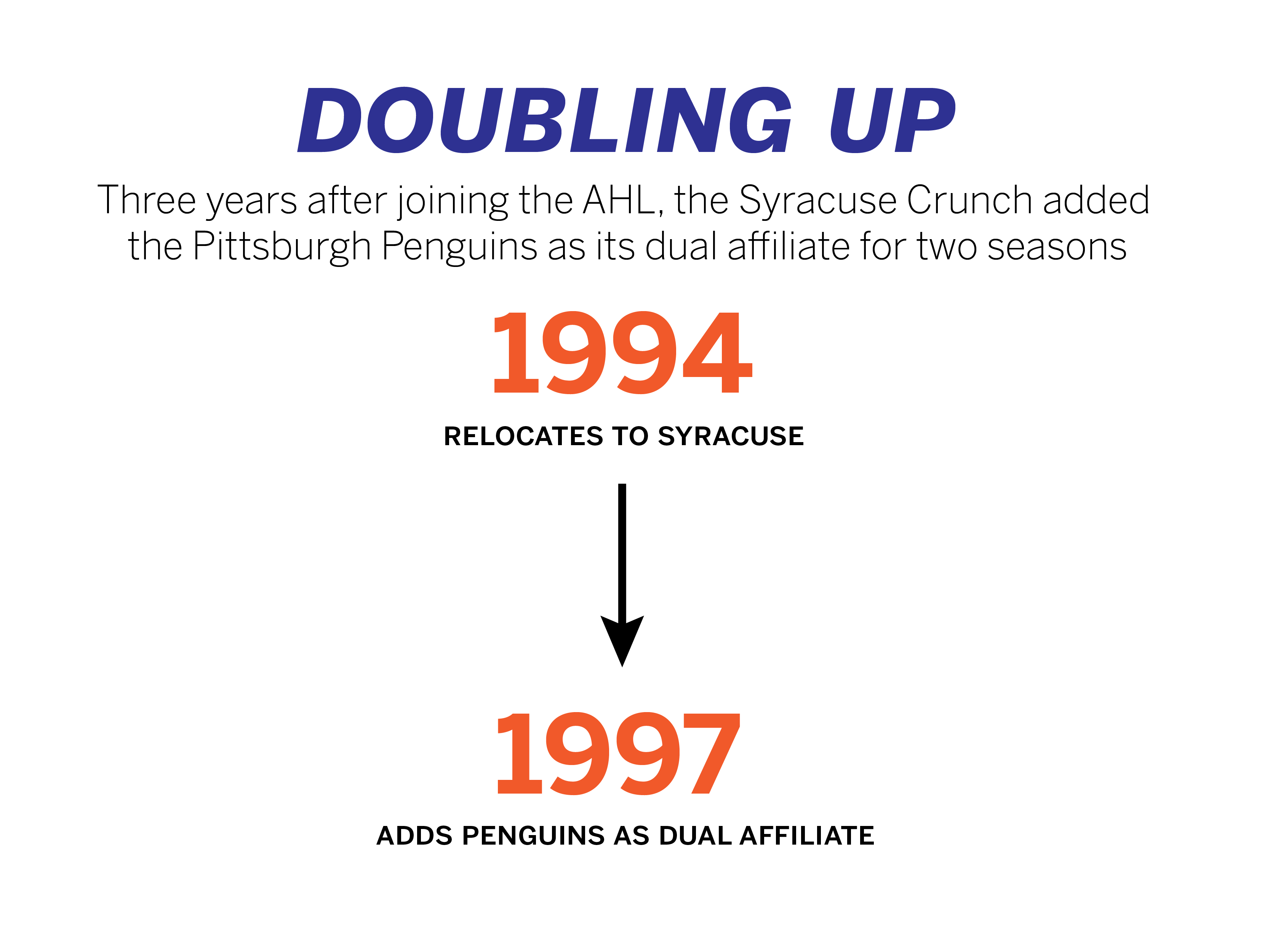 By the following Monday, that break became indefinite as the American Hockey League, along with the rest of the sports world, shut down as a result of the COVID-19 pandemic. The Crunch furloughed 13 of their 15 staff members and formed an unlikely dual affiliation with the Lightning’s in-state rivals, the Florida Panthers.

The Crunch first moved to Syracuse in 1994 as the Vancouver Canucks’ minor league affiliate, a partnership that lasted six seasons. During that span, the Crunch added the Pittsburgh Penguins in 1997 as its dual affiliate for two seasons.

The Penguins were in such financial hardship that at one point the team couldn’t afford to buy their own sticks, Sarosy said. The Crunch ended up posting a franchise-worst 18-50-9-3 record during the 1998-99 season, and the dual affiliation subsequently ended.

Situations like those are why dual affiliates are a rarity in the AHL, Crunch fan and blogger Alexandra Ackerman said. She was skeptical when she heard the Lightning and the Panthers became the Crunch’s parent clubs prior to the 2021 season.

The Panthers’ traditional AHL affiliate, the Charlotte Checkers, were forced to opt out of the 2021 season due to travel concerns because of their distance from other league opponents.

The Crunch became one of three AHL teams with a dual affiliation in 2021, along with the Comets and the Chicago Wolves. The circumstances the Crunch and the entire hockey world underwent allowed the Lightning-Panthers partnership to function well, Ackerman said.

The two NHL organizations worked cohesively with the Crunch. The Checkers’ head coach even joined the Crunch in 2021 to assist the Panthers prospects as they changed markets. Sarosy and BriseBois joked that the Crunch ran a “glorified hockey academy” since all they did was train and play for nearly a full year.

Players were dealt pre-negotiated salary cuts prior to the start of the season, with the option of opting out of the salaries and not playing the season. The Crunch, however, were still trying to compensate for the eight games they missed out on to close out the 2019-20 season. The possibility of not having fans a year later was something Sarosy wasn’t sure his organization would be able to overcome. 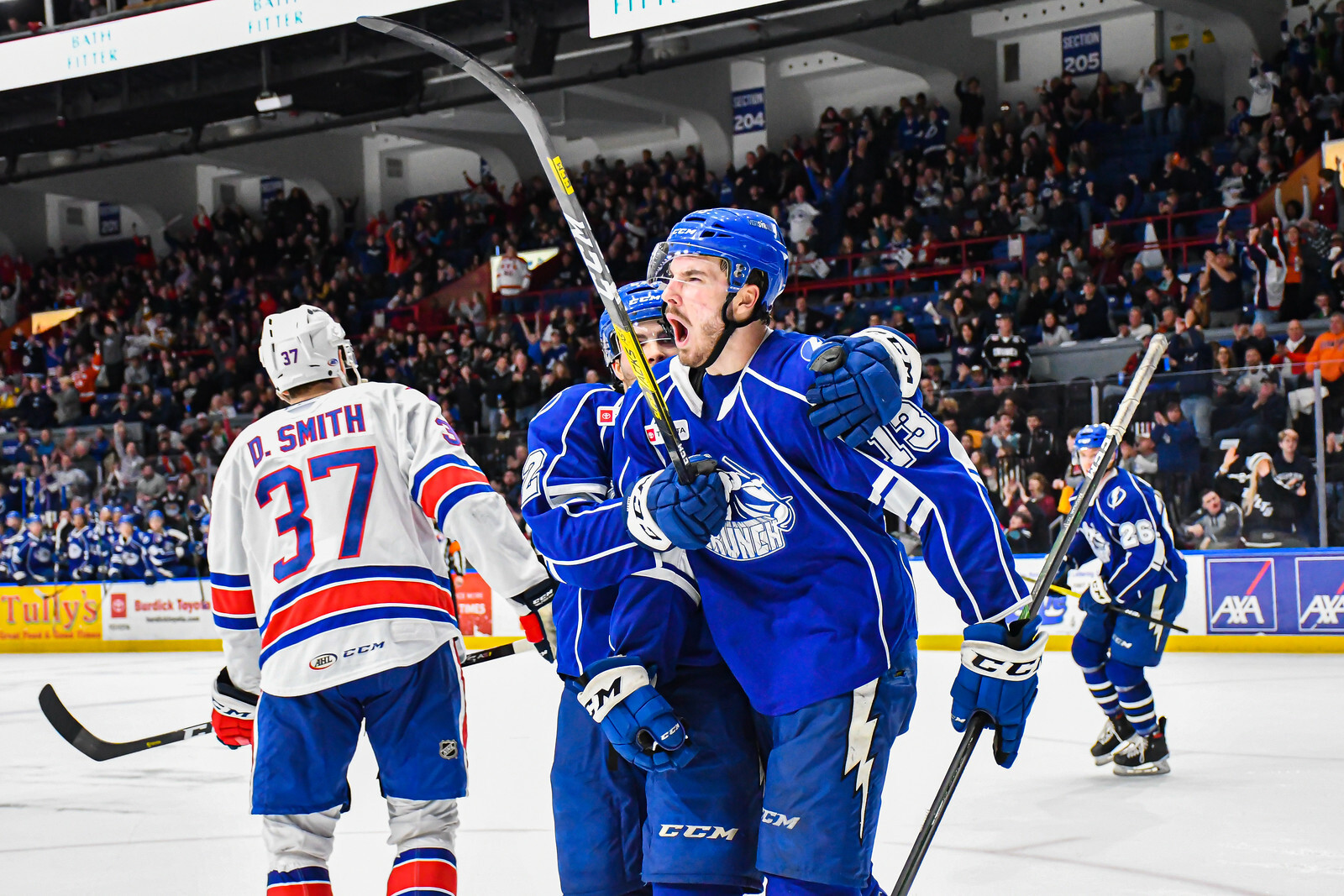 “A lot of emotions were felt. A lot of decisions had to be made, and they’re still having to be made,” Sarosy said. “It’s scary; it’s concerning. You have financial issues … it’s just all over the place.”

With many local businesses sponsoring the Crunch, Ackerman feared they could’ve easily folded ahead of the 2021 season, which was exactly what happened to the Binghamton Devils last year.

“I honestly feel like that could’ve happened to any of the AHL cities,” Ackerman said. “In the back of my mind I was like, ‘Am I going to lose my team? … How are we going to pull this off?’”

But Sarosy credited the organization’s strong relationship with the Lightning as a major reason the Crunch felt comfortable opting into the 2021 season. It allowed the Crunch to bring back two more furloughed staff members, and the Lightning’s commitment to its return-to-play protocol made Syracuse one of the safest markets in the AHL, Sarosy said.

Given strict COVID-19 travel protocols in New York, the Crunch found that it was cycling players more frequently than usual. With the implementation of the NHL’s taxi squad — a group of five players training in their respective NHL markets who are eligible to play for both their NHL or AHL teams — players were being sent to and from Florida more often. 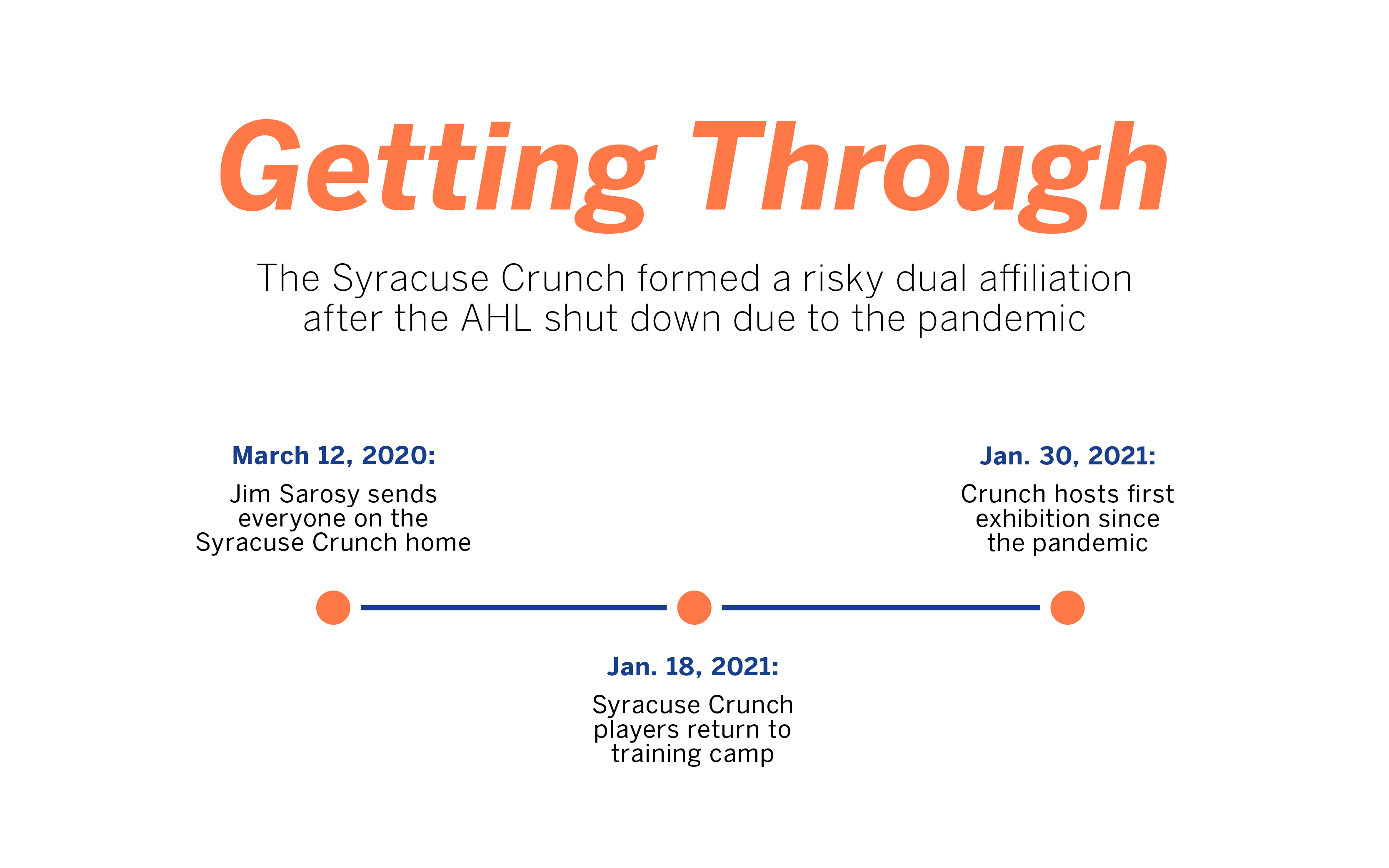 Tampa Bay regularly flew its players via private jet to and from Syracuse and sometimes sent players on charter buses to other airports in the region. The Panthers instead made their players drive to Syracuse themselves.

“What I was most proud of through all of that is, it was never a, ‘He’s a Florida guy. He’s a Tampa guy,’ Sarosy said. “It was always ‘They’re, Crunch guys,’ and I love that.”

For the 2021-22 season, the Crunch will serve as the affiliate for only the Lightning, as the Checkers opted into the upcoming AHL season. The Crunch recently announced they will require a proof of vaccination to enter Upstate Medical University Arena this season.

Not being able to see her team play live was the one thing Ackerman missed the most during the pandemic. She is excited to return back to her old game day routine, traveling to the Upstate Medical University Arena every weekend.

“It’s incredible. It’s such a rush. It’s such a stress release,” Ackerman said. “To not be able to go down to the (arena) and not talk to the people that I talked to every weekend for 18 years was really hard.”

The post How the Syracuse Crunch’s unorthodox dual affiliation saved the franchise appeared first on The Daily Orange.