After returning to St. Petersburg, Russia, for winter break, Syracuse outside hitter Polina Shemanova and middle blocker Marina Markova had one major problem. Visa complications left the pair’s return uncertain and ultimately caused them to miss the entire spring season. They arrived in the U.S. two months later than expected.

Syracuse finished with a 3-5 spring record without two of its strongest players on the attacking end. Shemanova, the 2018 Atlantic Coast Conference Freshman of the Year, has recorded 1,165 kills to date, while Markova has 340 kills.

Markova said she barely unpacked her bag when she returned home. She sometimes sat on her luggage, hoping she’d soon be heading back to the U.S. For Shemanova, it was the constant feeling of uncertainty that bothered her, as she said she’s the type of person who always has her plans well-thought out.

Delays with the visa approval process at the U.S. embassy in Moscow, Russia, stalled the two. Obtaining the visa wasn’t difficult, but scheduling an appointment with the embassy created the most difficulty, Shemanova said.

“That was a feeling of frustration of not having the ability to plan anything. I don’t know if I am going to go to the States tomorrow, in a month, in a year, never,” Shemanova said.

While in St. Petersburg, Shemanova reunited with her first youth coach, Vasily Dokuchaev. She practiced her serve and passed with the little kids Dokuchaev coaches, describing herself as a “pro player” because of the skill difference between the children and herself. But it didn’t have the same feeling to her, and challenges with capacity restrictions limited the opportunity to practice indoors.

A goal for this season was improving her serve using a top spin style technique, but Shemanova said she wasn’t able to practice her serve because the Russian gyms were too small. Instead, she focused on strength, conditioning and individual workouts.

“I did a lot of work outside of volleyball, which really, really helped me this season and I can feel it already,” Shemanova said in a preseason press conference. 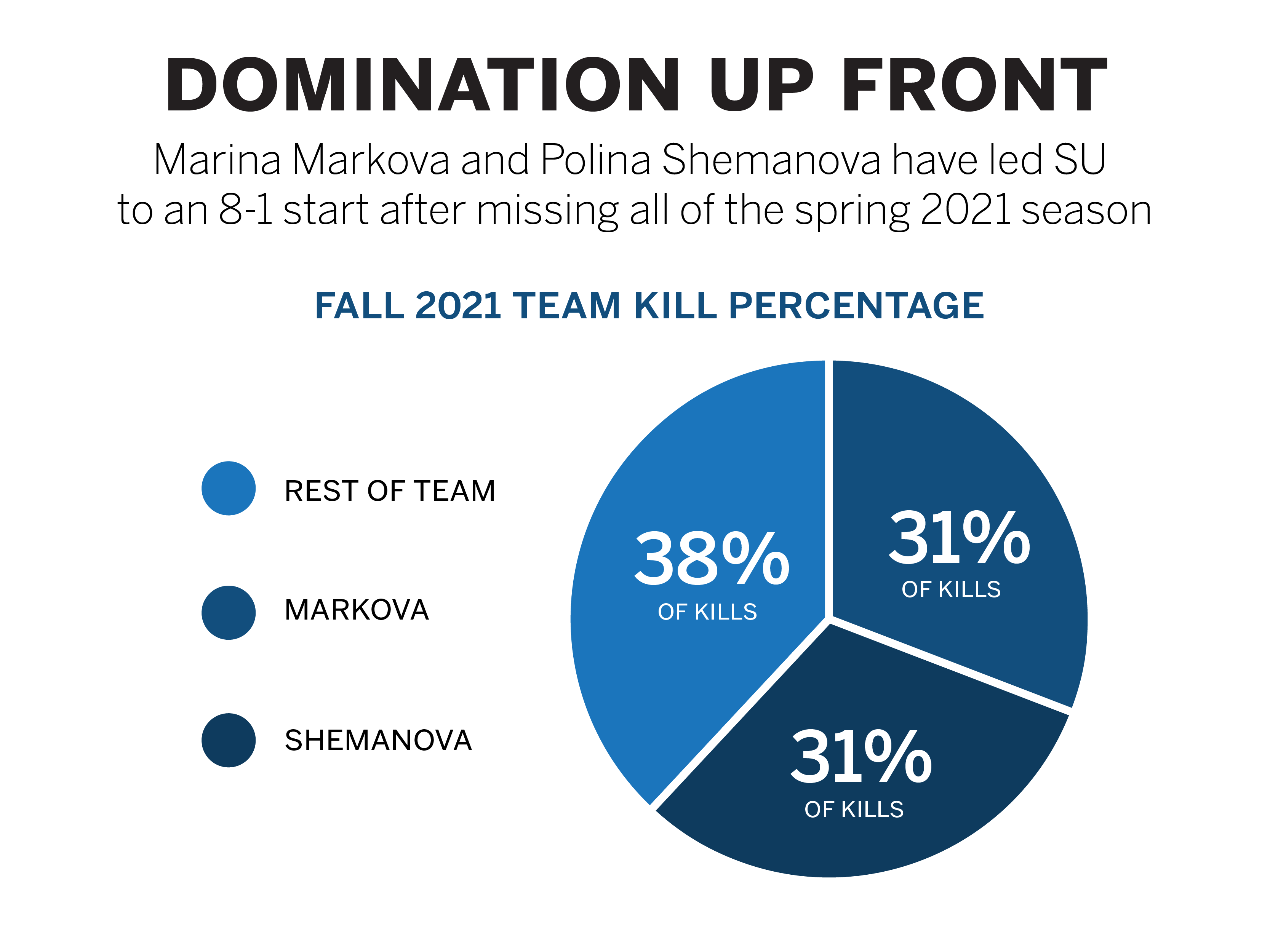 Occasionally Shemanova played in amateur volleyball games to keep her form, but nothing on a very competitive level, she said.

Markova also trained individually and with one her former coaches, Yevgeny Sivkov, and his younger team by working out in the gym of a children’s sports school.

Both players emphasized the difference between beach volleyball and indoor volleyball, saying the movements in the two sports differ — especially when it comes to jumping.

The pair felt their time on the sand will benefit them this season, because of the movement, which keeps them more in shape and better trained. Markova believes it helped increase her vertical since the muscles are trained harder when playing beach volleyball.

“It’s much harder to run,” Shemanova said. “It was a really great switch, and … it makes you stay in shape.”

Syracuse struggled on the attacking end last season and relied heavily on middle blocker Viktoriia Lokhmanchuk and right side hitter Naomi Franco and outside hitter Ella Saada. Despite missing half the season, Shemanova and Markova ranked fourth and sixth in kills on SU.

To stay connected with the team, the duo watched every Syracuse game, hearing the commentators reinforce that they wouldn’t be there — a constant reminder of a situation out of their control. Zoom meetings and FaceTime calls with coaches and teammates allowed for interaction with the team, but at times, the time difference was a challenge, both players said.

Again, we have those big, powerful hitters that I think we may have been lacking last year. It’s really nice to have them back on the court.

Their visas eventually got approved — they obtained them in Moscow a week before departing for Syracuse.

The pair made their return in the Syracuse Invitational, where the Orange outscored opponents 9-2 in 11 sets. Markova was named the tournament’s most valuable player, recording 42 kills and four aces while Shemanova, named to the all-tournament team, scored 47 kills and five aces.

The following weekend at the Yale Invitational, Markova and Shemanova combined for 82 kills, and Markova earned ACC Player of the Week honors. Later at the Cy-Hawk Series Tournament, Shemanova and Markova scored 62 and 50 kills, respectively, leading the Orange.

“We have those big, powerful hitters that I think we may have been lacking last year,” middle blocker Abby Casiano said.“It’s really nice to have them back on the court.”

Head Coach Leonid Yelin said it’s much easier for the team to get kills when Shemanova and Markova are on the court because of their strong ability to spike. Markova’s versatility to move from middle blocker to outside hitter helps the Orange on the attack, he said.

Both players acknowledged that there were advantages and disadvantages to being in Russia, recognizing their time with family, personal training and conditioning as beneficial. But the inability to work with the team and uncertainty of any travel plans frustrated them the most.

“(It was) definitely a unique experience, and I don’t think I would love to experience it again — to be without any plans,” Shemanova said.

The post How Shemanova, Markova trained while in Russia during spring 2021 season appeared first on The Daily Orange.