The day Josiah Gray became an MLB draft pick is still a blur. More than three years after he heard his name called on the draft’s livestream, he first remembered that the day was calm, a regular couple of hours before a “hectic” night. He went out to dinner with his girlfriend — nothing special for Gray, who had just posted a 1.25 ERA, one of the best in college baseball.

Around 6:30 p.m. he, his girlfriend, his parents and one of his brothers sat down in the living room of his childhood home in New Rochelle, New York. No one knew when Gray would be drafted except his high school coach, Pete Annunziata. Roy Krasik worked in the MLB Commissioner’s Office, and his son played baseball with Gray in high school. Krasik called Annunziata from his office in Manhattan and said that Gray would likely go in one of the first few rounds.

Gray’s father hooked up a computer to their television. The first round is televised, but the next few rounds — where some scouts projected Gray to be drafted — are streamed on MLB Network’s website. As the 65th pick was announced, Gray got a call from his agent.

“The (Cincinnati) Reds are interested in selecting you at pick 72, what do you think?” his agent said.

Gray asked if he could think about it. He was surprised since the Reds hadn’t spoken to him much, only reaching out early in the draft process.His mind ran through the teams he’d been speaking with — the Blue Jays and the Braves — but the Reds didn’t ring a bell. But then the “surreal” feeling that someone was that interested in him set in, Gray said. A culmination of the emotions, conversations and experiences he’d had over the last year hit him in the minutes between when he hung up with his agent and when Gray called him back.

Memories of his final game against Merrimack and from his junior year when friends and classmates at Le Moyne told him he definitely would leave school early to turn professional resurfaced in Gray’s mind. It was finally setting in that he would wake up the next morning as a professional baseball player.

The realization settled in during the early moments of the second round when Gray heard his name. The broadcast followed the announcement with a video of Gray pitching in his Le Moyne uniform. At home, everyone screamed in excitement. His father, a Reds fan, ran into the other room to grab Cincinnati shirts, handing them out to each member of the viewing party.

But Gray wasn’t always the 6-foot, 205-pound, hard thrower from central New York who was projected as a top major league pick. That wasn’t even a thought when Le Moyne head coach Scott Cassidy first heard of Gray’s name from another area scout. In fact, the first video Cassidy saw of Gray didn’t even feature pitching. It was of a skinny shortstop, unrecruited by any other college, fielding balls and showing off his bat speed. Gray impressed Cassidy with his agility at short and his ability to zip the ball over to first — something former teammates would later say eased his transition to pitcher.

A photo posted by Josiah Gray

After reviewing the film, he called Gray to begin the recruiting process. The next week, Cassidy drove down to see Gray play in a doubleheader against New Rochelle High School. Despite only seeing one play in the infield — a high chopping, slow rolling ground ball up the middle — Cassidy liked his athletic first step and the “whippy action” he had on his throw.

“You see those actions and you’re like, this kid can move out there … he’s got arm strength to play the left side,” Cassidy said.

Gray didn’t produce from the plate in either game Cassidy attended. He remembered Gray popping out but also that he liked the swing he put on the ball. Cassidy wanted Gray to play on the left side of the infield, pitch periodically and continue on a path to become the starting shortstop at Le Moyne. Cassidy didn’t see much room for him on the mound despite Gray shutting down hitters in his starts at New Rochelle.

So Gray spent his freshman year at Le Moyne backing up at shortstop, hitting well, but not blowing anyone away, and he ended up starting several at shortstop, Cassidy recalled. The “two-way” player he recruited Gray to be wasn’t going to work long term. He knew his arm strength was there to become a pitcher, the way he could throw the ball across the diamond with velocity and that “free and easy and athletic throwing motion.” He just didn’t know if Gray could succeed on the mound at the college level.

“Even after his freshman year going into the summer, our intent was for him to be the starting shortstop,” Cassidy said. “But when he came back in the fall, his arm strength was just lightning at that point.”

Gray spent the summer after his freshman year in the Hamptons Collegiate Baseball League. He pitched most of the time, hardly seeing the infield. But through his general maturation and weight increase, Gray’s fastball touched as high as 94 mph. It quickly turned into his main pitch, one that he showed the most confidence in and one that skyrocketed from the mid-80s fastball he entered Le Moyne with. 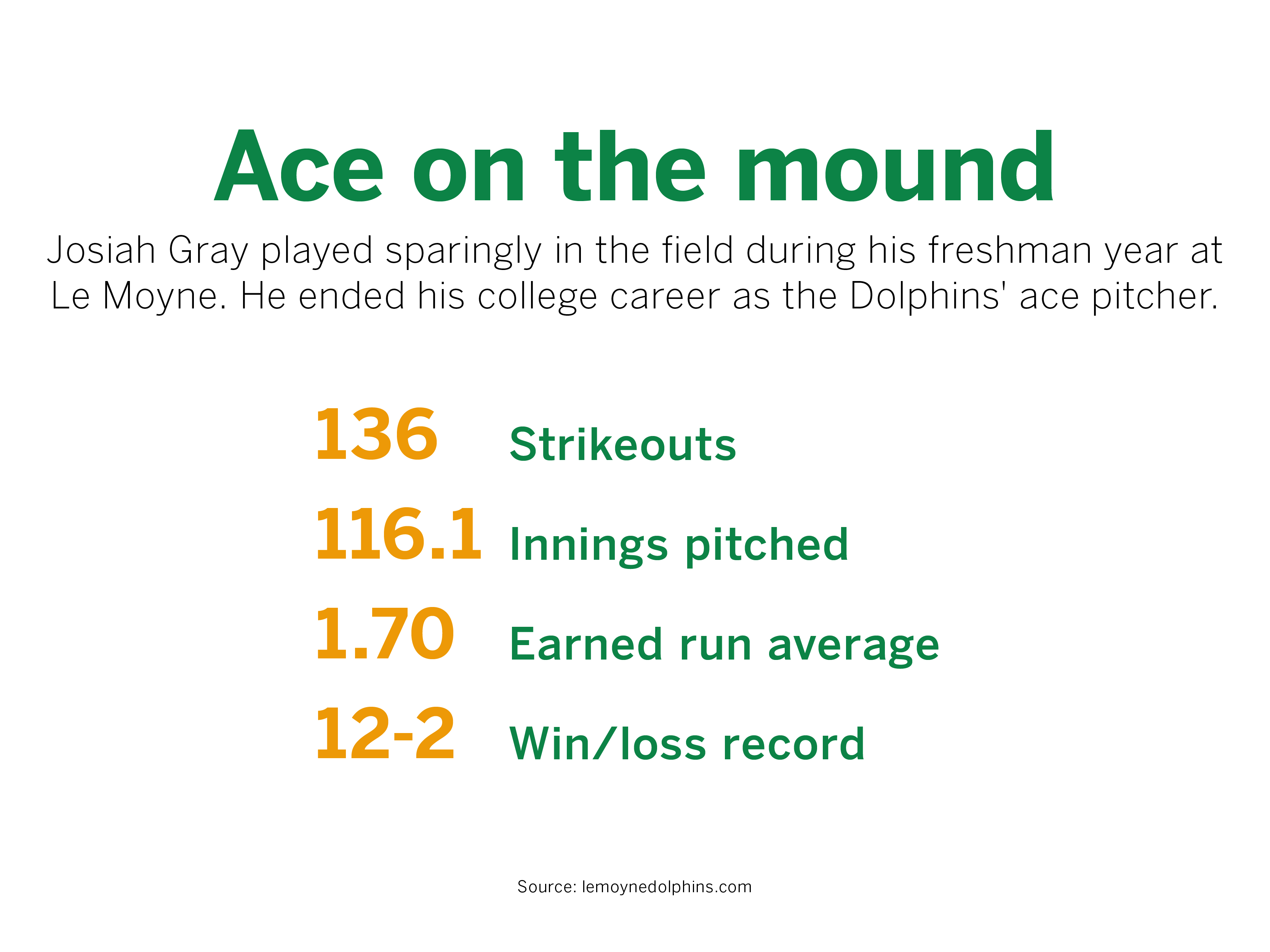 He returned in the fall as a two-way player, but Cassidy and Gray’s teammates knew his pitching skills had improved. His fastball was “heavy,” as former teammate Ben Walsh described it, a quick, effortless motion that gave it the illusion of rising as it reached the top of the zone. The Dolphins train at Sport Center 481 in Syracuse, a facility marked with a white backdrop behind pitchers that makes it difficult for hitters to see the ball out of the pitcher’s hands.

That winter, former teammate Alex Kubera watched Gray during a bullpen session. Kubera noticed he was trying to throw his slider too much during a live batting session.

“Dude, you throw 94-96 mph, just throw it at the top of the zone and you’re going to strike the guy out,” Kubera said to Gray in the echoing building. Gray struck out the batter on the next pitch, a high fastball just like Kubera told him.

Gray continued to bat and play shortstop during his sophomore year, all while putting on nearly 30 pounds of muscle. His mother, Monica, said she remembers keeping “jars and jars” of peanut butter around the house. She raised three boys and never once saw that much peanut butter in her home, she said. At Le Moyne, Gray frequented the Dolphin Den dining hall, located next to the athletic training facility. He said he’d eat everything that was offered. Gray knew he needed to put on more weight in order to find the force he needed behind his newfound fastball. Mac and cheese and chicken patty sandwiches were staples, he said.

He finished his sophomore season hitting .226, striking out nearly 30% of the time. So Gray understood when Cassidy invited him into his office at the end of the year to tell him hitting wasn’t in his future. Gray grew up wanting to be a shortstop in the major leagues and emphasized that to his coach, but he finally sighed and agreed to transition to a pitcher.

“You have a chance to make money on the mound, that’s where your bread and butter is,” Cassidy told Gray.

Gray spent his senior year of high school as the second ace on Annunziata’s staff. He had great command, and his “fluid” motion allowed him to throw a plethora of different pitches for strikes, Annunziata said. But when Cassidy called Gray to offer him a scholarship to play at Le Moyne, that wasn’t in the cards. Gray received a call from Cassidy late one night while the then-high school senior played at a Perfect Game tournament in Georgia. He’d been talking with Gray for the past week and had seen him play a few games in New Rochelle.

Gray was shocked and excited at the opportunity to play shortstop in college. So he immediately called his mother to tell her Cassidy had offered a $25,000 scholarship for him to play baseball. She called the coach to set up an official meeting in person. When they visited Le Moyne for Cassidy’s presentation, Gray and his parents instantly fell in love with the campus.

Former Le Moyne player Brian Cox led an overnight trip with Gray and a few of his future teammates. He said Gray was quiet, but one of the nicest people he’s ever met. Gray was just trying to “get a vibe” of the academics and the surrounding Syracuse area. Division II Le Moyne ended up being his only offer to play college baseball. Cox and several other recruits went out to a few places, including Clinton Street Pub, and let him sleep in their suite-style dorm room. That night they all watched Derek Jeter hit his final walk-off single against the Baltimore Orioles, something Gray said he’ll always remember.

Gray verbally committed the next day.

Even after his freshman year going into the summer, our intent was for him to be the starting shortstop. But when he came back in the fall his arm strength was just lightning at that point.

“Having (Cassidy) ahead of him to kind of show him the ropes,” Cox said. “Knowing that he knows what it takes to be in the show, I think that really resonated between those two.”

At the end of Gray’s junior year with Le Moyne, the Dolphins made a run to the DII NCAA Tournament. He started two straight games against Pace. After throwing eight shutout innings, Gray jogged out to the mound to seal the game. On his final pitch, he threw a 96 mph fastball that caught the outside corner of the zone. His final pitch left teammates stunned. Nine scoreless innings capped off by a high 90s fastball on the black.

Two starts later the Dolphins faced Merrimack, looking for their first NCAA Regional win in seven years. Cassidy said Gray had been talking with MLB scouts all week, and Gray said classmates were telling him the whole time that these would be his final moments as a student at Le Moyne. Gray didn’t care. He settled in on the mound, emotionless like always.

Annunziata said Gray will “never show up” a batter by celebrating on the field. He waits until after the game to pour out his heart.

In the final inning, he was still throwing his upper-90s fastball, the one he said has “pure backspin” that doesn’t fall off at the top of the zone. It didn’t exist four years ago when Gray first walked on to Le Moyne’s campus, but it would carry him to pitch alongside Clayton Kershaw with the Los Angeles Dodgers.

“Having an inkling that that was my last college pitch made that moment even more special,” Gray said.