On Dec. 4, 2019, Greg Schiano was reintroduced as Rutgers head coach. New Jersey Gov. Phil Murphy spoke at the press conference, saying he “was convinced” that Schiano was the right man for Rutgers football. Murphy said everything the Scarlet Knights needed to succeed was in New Jersey and Schiano — a Bergen County, New Jersey native — was the coach who could once again rebuild the program.

“Everything Rutgers needs, not just to be competitive, but to contend in the Big Ten, is right here in New Jersey,” Murphy said. “I know we now have a better chance again to have the best football players in New Jersey seriously consider Rutgers and keep them here at home.”

Nineteen years earlier, Rutgers first hired Schiano after he spent two years as the University of Miami’s defensive coordinator. The Scarlet Knights hadn’t been to a bowl game since 1978 and consistently finished in the Big East cellar. Schiano’s predecessor, Terry Shea, only won 11 games over five years as head coach.

After accepting the head coaching position, Schiano promised that Rutgers would win its first national championship — something that garnered lots of laughs and smirks from people who didn’t believe him, he said. But Schiano also said there would be a Rutgers coach at every high school in New Jersey during the recruiting process.

Over the ensuing 10 years, Schiano built Rutgers into one of the most competitive teams in the Big East. In 2005, the Scarlet Knights played in their first bowl game in 27 years, and the following year they went 11-2 — ranking as high as No. 7 nationally.

From 2007-2011, Rutgers averaged nearly eight wins per season and played in four more bowl games. Schiano recruited future NFL players like Ray Rice, Kenny Britt and Devin and Jason McCourty out of Rutgers — and Syracuse’s — backyard. Last season, he returned for the first year of his second stint as RU’s head coach.

“When coach Schiano was there the first time, they overwhelmed the state,” Darnell Grant, the West Orange (New Jersey) High School head coach, said. “They got all the top players, they did a really good job of making their presence known early.”

When Schiano leads Rutgers into the Carrier Dome on Saturday, it will be the first time the two schools have met since October 2012. In Schiano’s final seven years as head coach, Rutgers won five of seven matchups against Syracuse. Throughout his tenure, Schiano competed against SU and other schools in the area for top players, frequently winning recruiting battles through the strong relationships he developed with high school coaches — particularly in his home state of New Jersey. 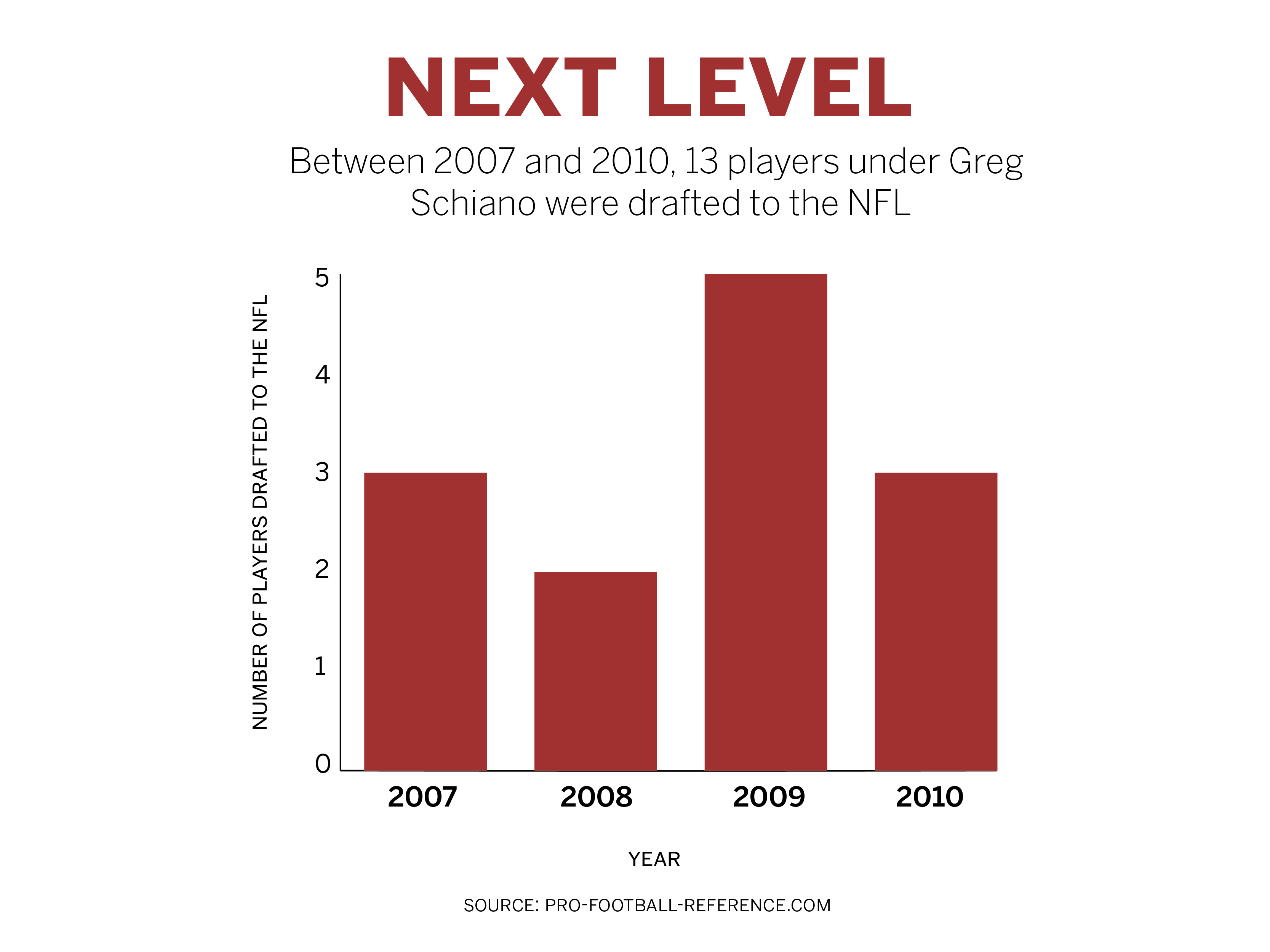 “Greg understands New Jersey,” Darnell said. “He understands if you’re a coach what it takes to motivate us, galvanize us.”

Dan Sabella — currently the head coach at Don Bosco Prep — took his Northern Jersey high school teams to overnight camps at Rutgers, where he developed relationships with the Scarlet Knights’ coaching staff. Longtime area head coach Joe George said Rutgers was always “open door” — a place where he could routinely go and watch film or the team’s strength programs. He said he could call Schiano or his assistants at any time, too.

Schiano wanted to turn New York City and New Jersey into Rutgers territory after years of Syracuse control in the area, former SU assistant John Anselmo said. In 2005, Schiano hired Kyle Flood to coach Rutgers’ offensive line. Flood was born and raised in New York City and coached local college programs for 12 years before moving to RU. He was able to recruit the areas Schiano targeted without having to go against Syracuse, former Syracuse quarterback Don McPherson said.

After running back Rice decommitted from SU in early 2005, Schiano seized the opportunity and brought him to Rutgers. With Rice leading the RU backfield as a freshman that year, Schiano led Rutgers to a 7-5 record and an Insight Bowl appearance. The next season, Rice ran for 20 touchdowns, and the Scarlet Knights started the season 9-0. They defeated Syracuse at home, 38-7. It was the third time in four seasons Rutgers easily handled the Orange, after SU had won 15 of the previous 16 meetings.

After the 2011 season, Schiano left to become head coach of the NFL’s Tampa Bay Buccaneers. Rutgers found success with his successor, Flood, going to three bowl games over the next three years. But in 2015, RU went 4-8 and Flood was fired. He was replaced by Ohio State defensive coordinator Chris Ash, who Darnell said he didn’t “have a lot of interaction with.” Ash went 8-33 in just over three seasons as head coach. 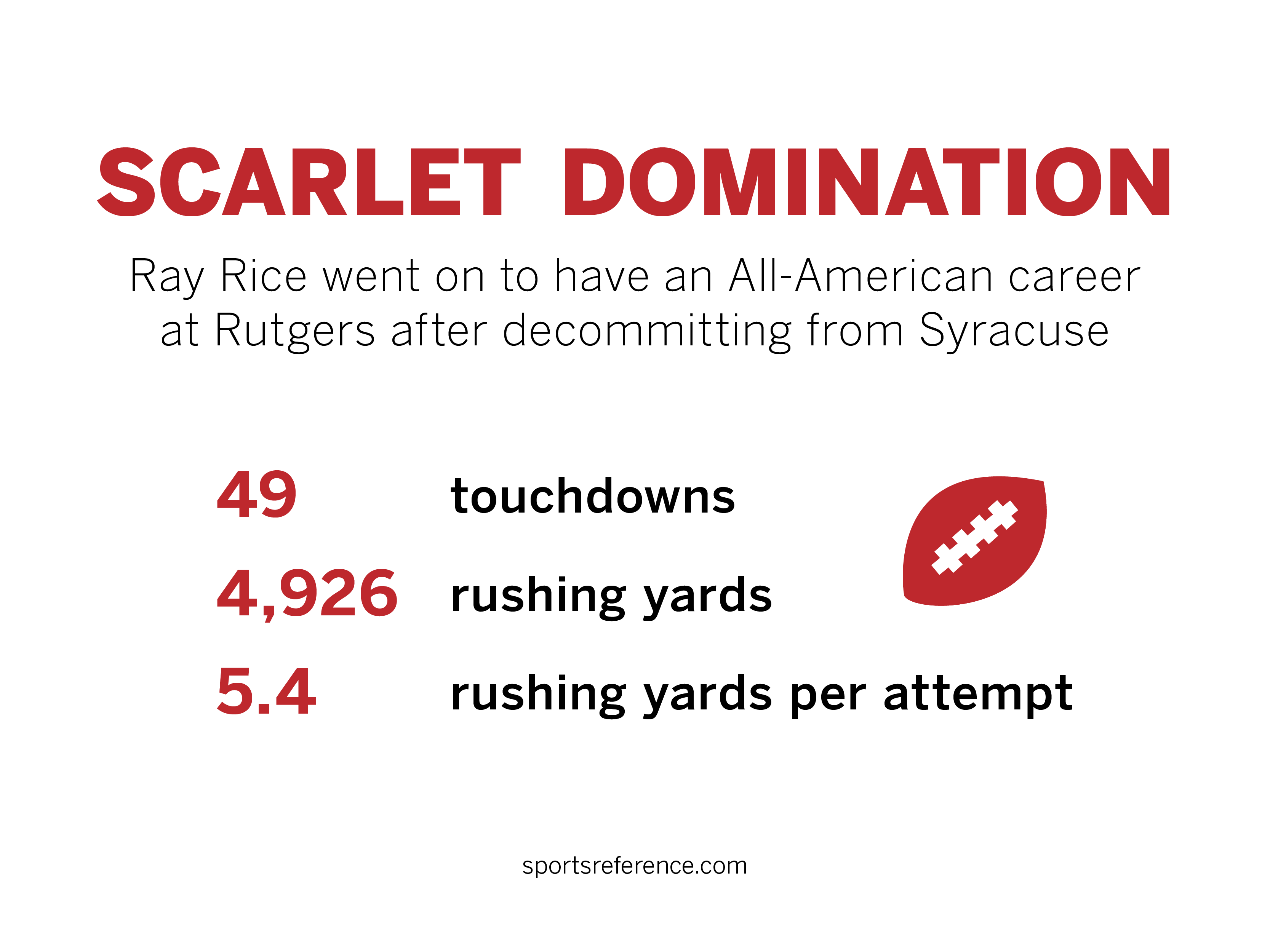 After returning to Rutgers, Schiano immediately began reaching out to New Jersey high school coaches, hoping to reestablish the relationships from a decade ago. Schiano met with Sabella shortly after his first press conference and visited Darnell and George personally, talking to them about his plans to rebuild the program. He watched from the sideline as Darnell’s brother, Barris Grant, coached Hillside (New Jersey) High School against West Deptford (New Jersey) High School in a 2019 sectional championship game.

The result, Camden (New Jersey) High School head coach Dwayne Savage said, was an agreement among many coaches in New Jersey to let their players visit Rutgers as much as possible before making their recruiting decision. Schiano’s staff also features multiple assistants with strong ties to both North and South Jersey, including Nunzio Campanile, Augie Hoffmann, Jim Panagos and Rob Hinson, who have been “very visible” recruiting in the area, George said.

“I think I’m speaking for quite a few of the coaches, we were all really excited when he was coming back, and we knew what we were getting,” Sabella said.

Schiano stayed with Darnell for 45 minutes, talking with him about his vision for the program and why he returned to Rutgers. Along with his defensive line coach, Panagos, Schiano had multiple conversations with George about what it will take to make Rutgers successful again. Schiano noted to George that he was again planning on being in every high school in New Jersey — just like his first stint.

Rutgers has won just six games over the past three seasons, but Schiano’s existing ties in the area could help him win recruiting battles and begin the process of fielding more competitive teams at Rutgers — a program that has finished near the bottom of the Big Ten since joining the conference in 2014.

The post How Greg Schiano’s return to Rutgers affects Syracuse appeared first on The Daily Orange.