When Kevin Belbey walked out of Faegan’s Cafe & Pub one night in 2014, he was inspired to create the ultimate Syracuse alumni basketball team. He had run into Eric Devendorf at the restaurant, and the SU men’s basketball alumnus was on board with the idea.

With the help of other alumni, Belbey went on to create Boeheim’s Army, an Orange alumni team that participates annually in The Basketball Tournament, a single elimination competition that takes place every summer.

Belbey spent nearly every day of his undergraduate time at SU involved with the men’s basketball team. Arriving on campus in the late summer of 2009, he immediately joined the team’s managerial staff. Belbey was in Syracuse nearly year-round, attending every early workout, practice and game. He started by filling water bottles and mopping sweat off the court. By his junior year, he was promoted to head manager and oversaw the entire staff of about 20 managers.

After the season ended and his subsequent graduation in 2013, Belbey stayed at Syracuse to attend law school.

“I knew I wanted to try to stay involved. I had just given so much time and effort for four years to the program,” Belbey said. “But I didn’t know the best way. I didn’t have the time to still be a manager every day.”

It was during his first year at law school when Belbey was first introduced to TBT. A friend he knew from home in New Jersey mentioned the creation of a new, winner-take-all tournament and pitched the idea of a Syracuse alumni team. Belbey thought the idea was too good to be true but didn’t have the time to balance school and this new project.

“I thought to myself ‘If Notre Dame can do this, Syracuse can do it and do it better,’” Belbey said.

As a basketball manager, Belbey had experience connecting and bringing in former SU players for campus events. During his junior year, Belbey revamped and headed Syracuse’s “Midnight Madness” event at the Carrier Dome. The event sold nearly 20,000 tickets, and the ongoing NBA lockout allowed former Orange players to revisit campus for the event. Former players Wes Johnson, Jonny Flynn and Carmelo Anthony — who was making his first trip back to Syracuse since his championship run in 2003 — all showed. Philadelphia-based rapper Meek Mill performed as well. 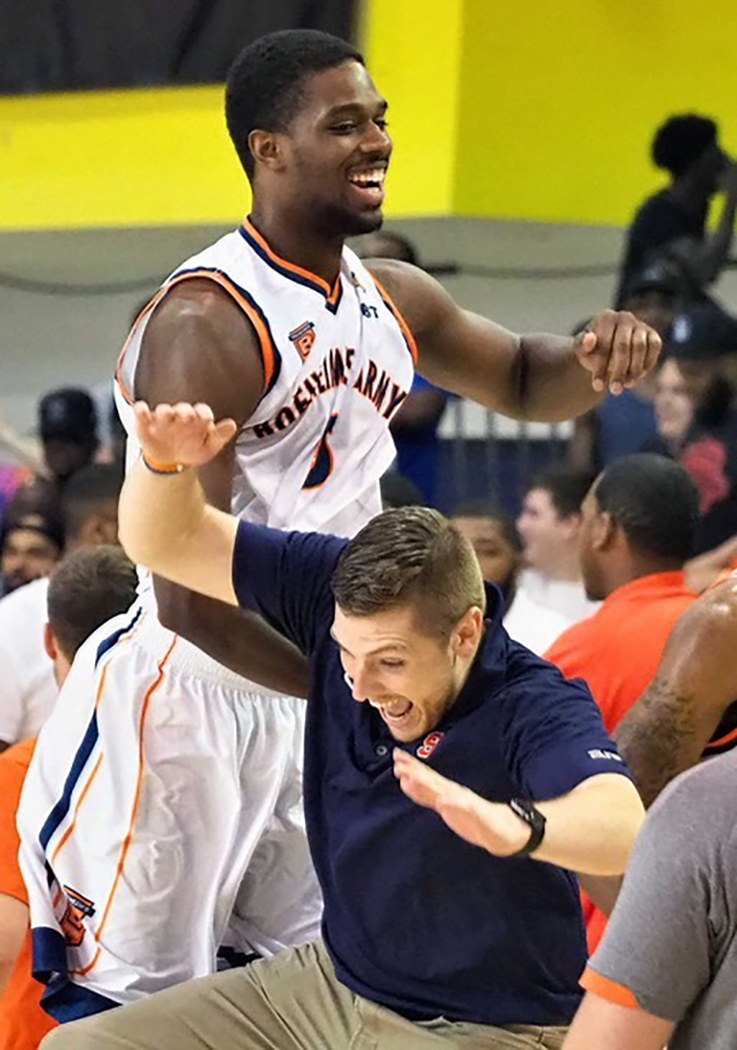 After being eliminated in the quarterfinals this year, Boeheim’s Army is yet to win The Basketball Tournament. Courtesy of Ben Solomon

In late 2014, Belbey began constructing the Syracuse alumni team, which he named Boeheim’s Army. He first reached out to Hakim Warrick, who played for the Orange from 2001 to 2005, and participated in TBT 2014 for a different team. The second player Belbey was able to recruit was former SU guard Devendorf, whose career has taken him to Turkey, Israel, Greece, Australia and New Zealand. To date, Devendorf is the only Boeheim’s Army player to play for the team every year.

With Belbey at the helm, Boeheim’s Army participated in their first tournament in 2015, with the goal of winning the now $1 million prize. The team made it to the quarterfinals, where they lost to Team City of Gods, 80-76.

By its third year, TBT had gained a reputation for being highly-competitive and entertaining, with the prize climbing to $2 million in 2016. Because Boeheim’s Army was also gaining popularity, Belbey enlisted the help of an old friend, Marc Lomasky, to manage increasing travel budgets and rising popularity.

The two met in an accounting class during Lomasky’s senior year. Although Lomasky and Belbey knew each other during their time at SU, they became closer when Belbey decided to attend law school.

Since the formation of Boeheim’s Army, Lomasky has helped run practices, created a bank account for the team and organized team social media pages.

“This is just such a fun, little side project-hobby that he does from work and that I do from work,” Lomasky said. “So it really is kind of a nice distraction from work and also a way to give back to Syracuse.”

Outside of Boeheim’s Army, Belbey is an agent to numerous Syracuse alumni broadcasters, including Bob Costas, Mike Tirico and Sean McDonough. Belbey said it’s easy to do the tournament every year because most of his clients and coworkers are SU alumni.

Using the broad, multi-generational following of the team, Belbey, Lomasky and other members organized alumni signings in different cities and have led donations to the Jim and Juli Boeheim Foundation.

This past summer, TBT was one of the first live American sports to return to competition, with a 24 team bubble format. Belbey said fans, employees and players were all eager to get back into the rhythm of sports, calling him to ask for roster spots, unlike most years where Belbey had to ask players to join the squad.

“Like the rest of us, they’ve just been sitting on the couch watching Netflix and Tiger King,” Belbey said. “They wanted to get out there and compete and play basketball and do something fun.”