Syracuse was still looking for its first shot of the game in the second quarter against Vermont when SJ Quigley took a penalty corner and passed it to Tess Queen at the top of the shooting circle.

Queen, a senior, lightly tapped the ball forward toward the white line, setting the shot up for Eefke van den Nieuwenhof. The sophomore took a slight step forward to the ball and fired SU’s first shot of the game. Van den Nieuwenhof’s powerful kick went past four Vermont defenders and past Sierra Espeland, who dove for the ball as it went into the right side of the net.

A minute later, the Orange once again had a penalty corner and Quigley passed to Queen again, who set the shot up for van den Nieunwenhof. This time, van den Nieuwenhof stepped inside the shooting circle and fired an even harder shot. Espeland dived once again, but the ball had already hit the back of the net and rolled back to van den Nieuwenhof and her celebrating teammates.

“It’s just something we do and how we set up,” Bradley said. “If you had a player like that, wouldn’t you want to go to her on penalty corners?” 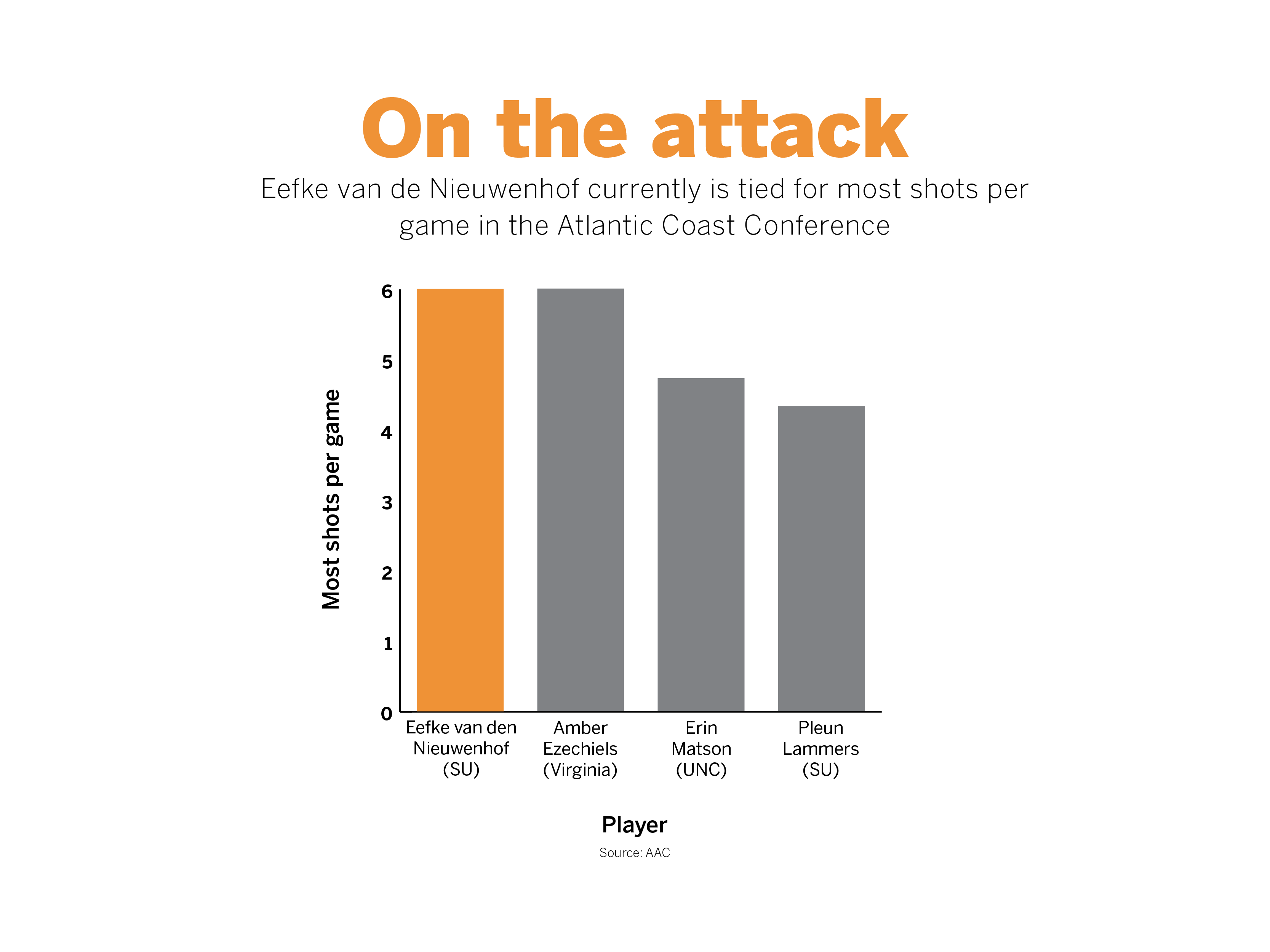 The results have shown in Syracuse’s first three games. Van den Nieuwenhof leads the Atlantic Coast Conference in shots per game with six, and her two goals against Vermont last week tied her with Boston College’s Sarah Johnson for the most goals by a defender in the ACC.

Razwan Ahmed, the technical director at van den Nieuwenhof’s old club team, ZSV Schaerweijde, said he remembered the first time he met the future All-ACC back. Her technical skills stood out in her first practice for Schaerweijde’s U16 team.

“I was watching the training with a lot of my colleagues and we start(ed) to see something different, something special,” Ahmed said. “She not only had a great physique but also a great technical ability in regard to receiving and passing the ball.”

Ahmed was impressed by van den Nieuwenhof’s ability to know when to apply defensive pressure on the opponent while playing for Schaerweijde. She always found comfort in playing defense despite being a striker during the season.

“The defensive role is more for me,” van den Nieuwenhof said. “Because I’m not much of a dribbler, I prefer to pass in the field.” 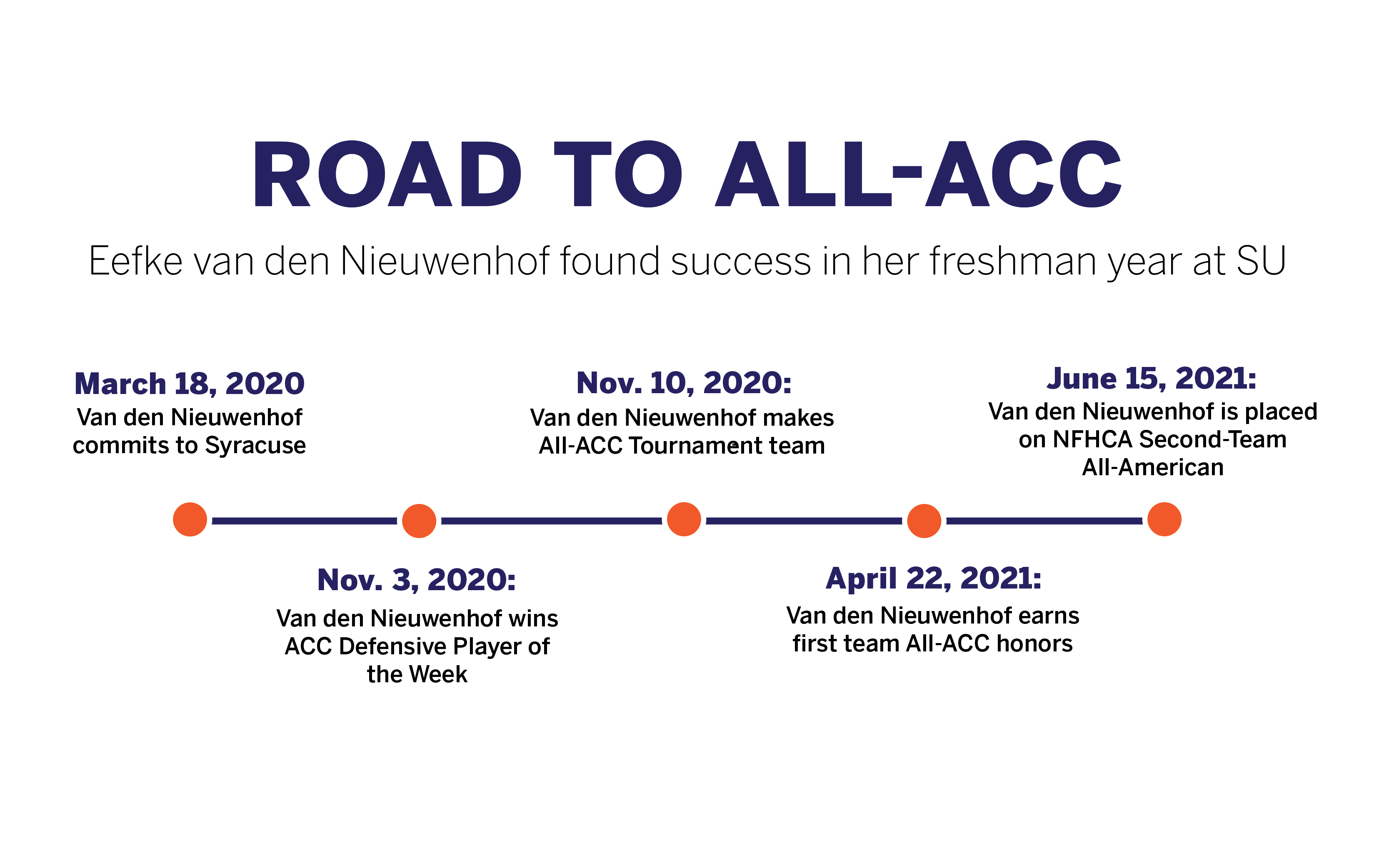 After her club career finished, van den Nieuwenhof committed to Bradley and Syracuse. She made her decision on March 18, 2020 — when the world first started to understand the severity of COVID-19. Although the pandemic caused uncertainty, it wasn’t hard for van den Nieuwenhof to make her college decision, as she described Syracuse as the “place for her to be.”

But it didn’t take long for van den Nieuwenhof to adjust. On Oct. 19 against Wake Forest, she scored her first career goal off a penalty corner. She fired the shot from long range and buried the ball in the bottom right corner of the net to force overtime.

“As a team we improve with each other, and that’s what makes me better,” van den Nieuwenhof said. “By improving others, I improve. I think that maybe good things will happen then.”

The post How Eefke van den Nieuwenhof honed her skills to become a top ACC player appeared first on The Daily Orange.