When Syracuse shut down team activities after head coach Jim Boeheim and a player tested positive for COVID-19, Boeheim made one thing clear: the 2020-21 season wouldn’t survive if the entire team had to quarantine following every positive test.

Effective contact tracing was the only way to make the season feasible, Boeheim said after testing positive two weeks prior to the start of the season.

“This is going to happen during the season if we don’t get contact tracing down,” Boeheim said. “We’ve got the chips, we have the technology to show that we’re not near each other.”

Days later, Syracuse announced about 90 minutes prior to tip-off against Niagara that the program had another positive test. No shutdown followed, and the game went on. Boeheim said the Orange removed those they believed had been exposed to the positive player, as indicated by SU’s Kinexon contact tracing technology.

Syracuse is the first ACC program to implement Kinexon’s SafeZone technology, which aids contract tracing processes within SU’s facilities. The players wear bracelets, called SafeTags, that are equipped with a chip to track all of their movements. The technology was first used in the United States by the NBA and is currently in use by both the NFL and collegiate conferences nationwide.

The German-based company creates motion sensor technology, and before the pandemic, it used data-driven analysis to track speed, acceleration and distance within athletes in the U.S and Europe. When COVID-19 became widespread, it partnered with soccer teams in the Bundesliga to manage contact tracing for potential infections, Kinexon spokesperson Matt Bontorin said. Months later, Kinexon’s technology helped facilitate the NBA’s Orlando bubble.

We’re just not chasing down rabbit holes. We actually can go specifically to the people and really help mitigate the risk of the virus.

The SafeTags — worn by athletes, coaches and staff — use radio frequencies to allow the devices to communicate with one another. If a person tests positive, SU Athletics can receive a detailed report of how many other devices that specific device came within six feet of and how long the exposure was.

“That kind of helps us,” Syracuse head trainer Brad Pike said. “We’re just not chasing down rabbit holes. We actually can go specifically to the people and really help mitigate the risk of the virus.”

The bracelets measure the distance between wearers to the nearest centimeter. If they get within six feet, they’ll hear beeps. The players are on “silent,” but the staff are all “on the beep,” which gets annoying, Pike said.

“What you think is six feet and what six feet actually is are two different things,” Pike said. “It’s been very eye-opening for me.” 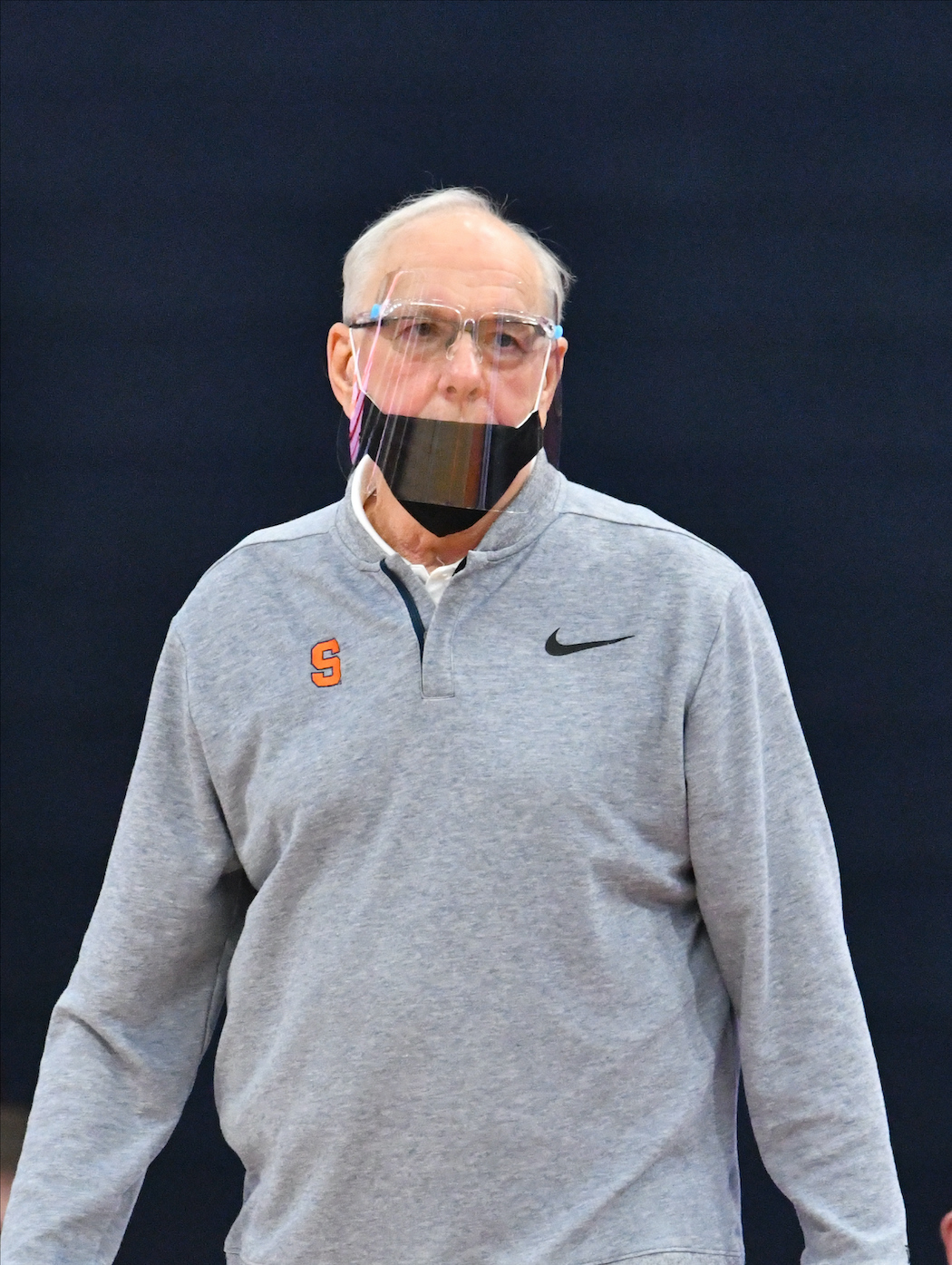 The chance of positive cases knocking out large stretches of the season remains very possible. Syracuse Director of Athletics John Wildhack cited the team’s compact schedule and travel — along with rising COVID-19 cases nationally — as major concerns for the 2020-21 season.

But by using the technology, Syracuse believes it’s able to say who was exposed to COVID-19. The Orange said they’d also ask all of their nonconference opponents to wear the bracelets when practicing or playing in the Carrier Dome. Officials who arrive at the Dome for games will also wear them, SU Deputy Director of Athletics Herman Frazier said.

David Larsen, an associate professor of epidemiology at Syracuse, thinks the technology has issues because the virus is airborne. Six feet isn’t a foolproof range to remain safe from contracting the virus — it’s just a guideline, he said.

“We are aware of the fact that it is impossible to completely eliminate the spread of the virus,” Bontorin said. “But what we are doing is reducing the risk of large outbreaks. We’re bringing a sense of certainty to the contract tracing process.”

Onondaga County Executive Ryan McMahon toured the Carmelo K. Anthony Center prior to the season to give the go-ahead for the start of the season and learn more about the technology. When the Orange report positives, they are reported to the county health department as well, along with the contract tracing reports.

Syracuse Athletics normally consults with Indu Gupta, Onondaga County health commissioner, on COVID-19 contact tracing. When Boeheim tested positive, Gupta said a program shutdown wasn’t needed because he had no prolonged and direct exposure to the players. But when a player also tested positive after scrimmaging with the entire team, the Orange shut down team activities out of precaution of more possible positives.

Before the Orange’s second game, a walk-on tested positive. Four players, including junior guard Buddy Boeheim, were standing on the sideline near the walk-on and had been exposed, Boeheim said. But Gupta determined the Orange didn’t have to shut down the whole team.

Syracuse’s last three games have gone as scheduled, and the four quarantined players are scheduled to return on Saturday as Syracuse (3-1) opens Atlantic Coast Conference play at Boston College (1-4).

The players don’t need to wear the SafeTags outside of team facilities, Bontorin said. The bracelets don’t track any GPS locations to maintain privacy, and they don’t have any personally identifying features. But Pike said that SU did send the players home with the SafeTags to track their patterns and habits outside practice. Many of the players live with one another, which makes contact tracing even more complex.

“We need to use the science and not make generalizations,” Boeheim said.

Boeheim believes he contracted COVID-19 while out to dinner, and SU Athletics has said it doesn’t believe any transmission has occurred from within the program. All infections have been from outside sources, SU Athletics said.

Syracuse student manager to Alan Griffin before warmups: “AG, did you get your chip?” Griffin turned around and went back to the locker room to get his wearable social distancing tracker.

The SafeTags also keep track of how long the players are close to one another. If a player tests positive, any teammate who spent more than 10 minutes near the player would be considered exposed and would have to go into quarantine.

When the whole team was in quarantine, the Orange delivered exercise bikes to the players’ apartments to help them stay in shape. The bike sat in the common room of shared apartments, and the players would alternate using it and cleaning it with aerosol spray and wipes between each exercise, Pike said. But Boeheim said it wasn’t good enough to stay game-ready, and the team wasn’t physically prepared for the season-opener against Bryant, an 85-84 win.

Syracuse is still behind because of all the days lost to practice, Boeheim said. Now, if another positive test arises within the program, the Orange may miss practices.

But, if the technology reasonably shows others weren’t exposed, they won’t have to miss games.