Nick Piroli had found the latest offensive move Carter Kempney needed to try. He was always searching for those clips, those highlight plays that usually contained Syracuse midfielders but could easily become Kempney if they worked at it. Kempney had the dodging ability of Tucker Dordevic, Piroli said. The speed of Brendan Curry. The shot of Jamie Trimboli.

This time, Piroli wanted Kempney to mimic Dordevic’s fake split dodge. Since the coronavirus pandemic wiped away high school seasons and quarantine began in March, the Class of 2022 five-star recruit spent every Tuesday and Thursday in his backyard working with Piroli, a 2016 Syracuse men’s lacrosse grad transfer. He needed to stay sharp in case club tournaments returned over the summer. The pair rotated between the agility ladder and cone drills — solidifying Kempney’s fundamentals and footwork ahead of the Carthage (New York) High School junior’s recruiting period.

After watching Dordevic’s clip, Kempney mimicked the hard-step move in front of his net, changing direction before breaking toward the cage. He paused and did it again. And again. After 15 or 20 repetitions, it was a usable move.

“He’s kind of similar to (Syracuse’s) three starting middies right now,” Piroli said. “Carter could become somebody like that once he’s up there just based on where he is right now.”

On Kempney’s two recruiting Zoom calls with SU, the Orange’s coaching staff shared the same vision. He was a central New York native from Carthage — on the same path SU lacrosse legends Casey, Mike and Ryan Powell took. Kempney could succeed in Pat March’s midfield-dominated offense — one that catapulted the Orange to the No. 1 ranking in 2020. And on Sept. 14, Kempey committed to Syracuse, joining one of SU’s most successful recruiting classes in recent years.

Kempney’s rise as a recruit the last six months was driven by workouts with Piroli and weight room sessions with his brother Tyler, a member of the World Cup ice climbing team. He became Syracuse’s first five-star commit since Owen Hiltz in 2020 and will be the third Kempney sibling to play for the Orange, joining his sisters Kailah and Braelie.

“His fundamentals are very solid, and his knowledge for the game is there,” said Tom Grimm, a family-friend and former SU lacrosse player from 2012-16. “So you put that together with his physical attributes and that’s a good recipe for a dominant midfielder.”

But choosing Syracuse wasn’t a given. The night of Sept. 1, the day the recruiting cycle started, Kempney and his family returned home around 10:30 p.m. and waited for the phone calls. Coaches warned they would start right away, and they did. His mother, Roxanne, couldn’t sleep between bursts of Kempney running into her room with an update on the latest school to reach out. 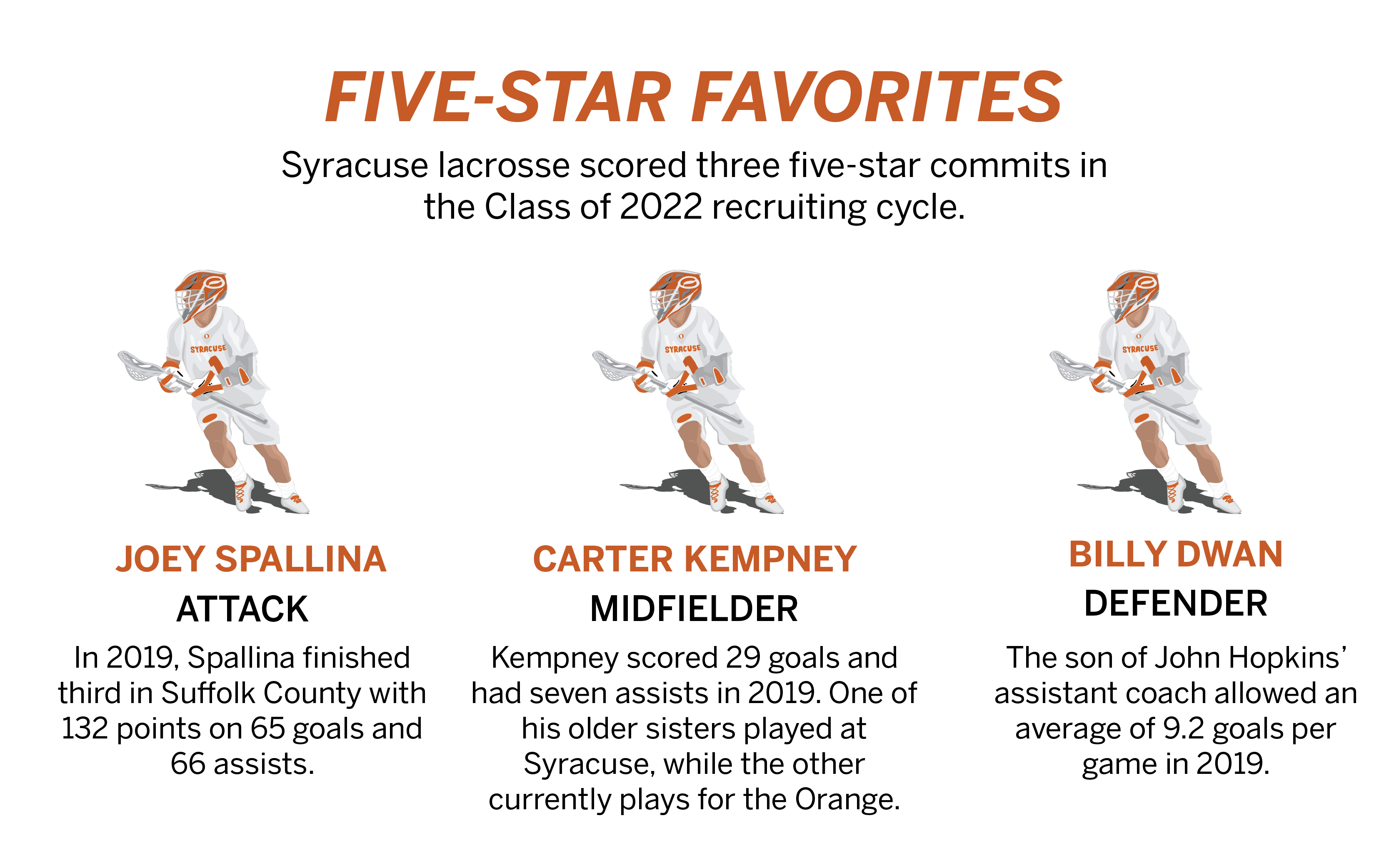 Kempney is the “total package,” Orange Crush coach Gavin MacLachlan said. Former SU lacrosse player and Orange Crush parent Matt Palumb called him an “old-school, two-way midfielder,” referencing his abilities on both sides of the ball. One of six five-star offensive midfielders in the Class of 2022, he was the best scorer on offense for his club team and Carthage head coach Jason Coffman, but was willing to grab a short stick when either team went down a man.

But during his freshman season, where he scored 17 goals for the varsity team, Kempney couldn’t score at the same rate as before. Eight or nine goals per game weren’t uncommon for Orange Crush tournaments. Opposing defenders had stopped biting when Kempney switched the stick’s head over his left shoulder, as they knew that it’d eventually find its way back to the right side.

“You gotta get better with this left hand,” Coffman said, and suggested practicing the motion in front of the mirror.

That’s what Kempney did. He fired left-handed shots during practices, and gradually developed a dual-sided approach on offense.

“He is so fluent with both hands now that he shoots the ball just as hard with almost the exact same accuracy just because he worked at it so much,” Coffman said. “One looks just like the other.”

Then COVID-19 scrapped Kempney’s sophomore season, and the impending recruiting cycle still loomed. In addition to Piroli’s twice-a-week workouts at the field behind his house, Tyler put Kempney through workouts in their basement weight room while letting his younger brother lead him through the lacrosse workouts.

Everyone knows who you are and everyone wants you to do well.

Roxanne Kempney on why her son chose Syracuse

After the Sept. 1 phone call barrage, Roxanne texted Grimm to set up a phone call to discuss everything. The following weekend, Kempney and his parents strolled around Princeton, Yale and Syracuse — trying to get a feel for the campuses with the NCAA still in a dead period and coaches unable to meet recruits or families in person.

“Everyone knows who you are, and everyone wants you to do well,” Roxanne said. “So I think that, too, was part of his decision — knowing that he would be kinda a hometown hero.”

Kempney grew up in the shadows of his sisters’ lacrosse careers, as Roxanne, his mother, coached them through club and Carthage programs. At SU, Kempeny crammed into the parents section and watched Kailah reach four Final Four’s from 2011-15 and finish as the Orange’s career leader in draw controls. His room had navy blue walls paired with Syracuse-themed bedding.

When Grimm came home from college one semester, in between seasons at Syracuse, he handed Kempney a pair of gloves and a stick he used at Syracuse. Kempney asked if he could have the helmet, too.

Grimm thought about it, but then paused. “I was like, ‘You gotta go earn that, man,’” Grimm recalled.

Over the next six years, Kempney worked toward that. And in two more, he’ll have a Syracuse helmet of his own.

The post How Carter Kempney, SU’s 1st 5-star since 2020, became the ‘total package’ appeared first on The Daily Orange.