eckett Wales describes his relationship with Aaron Hackett as “brotherly.” They text and call each week and Snapchat often. Wales grew up playing sports with Hackett’s older brother, later coaching Hackett when he was in high school.

When the time came for Aaron Hackett to choose a college to attend, a decision made up of more than 30 Division I schools, Wales, a former Syracuse tight end from 2010-13, wasn’t pushing him toward central New York.

“Nothing against Syracuse, great education, great football program,” Wales said. “But Harvard, who gets to go to Harvard?”

Aaron Hackett is the latest successful tight end to come out of Venice High School in Florida. Trey Burton, his idol, was a quarterback there and has now played six years in the NFL. Wales played alongside Trey at Venice before his career at SU — where he finished fourth all-time in receptions for a tight end — and has been a coach there since leaving college.

As he enters his senior year at Syracuse, Aaron Hackett’s expected to be a key contributor to an offense that struggled in 2019. He’s always been a blocker, but his improvements as a receiver — which began years ago in Venice — will determine his success in 2020.

Multiple people described Venice — a small city near Sarasota, Florida with a population of about 20,000 — as a “one school town.” It’s home to the 2017 state champions and 21-year head coach John Peacock, who has consistently produced high-major Division I talent.

Much like Syracuse, Peacock runs a no-huddle offense. Babers told the Hacketts when they officially visited the school that the Orange’s coaches feel more comfortable recruiting Florida kids because of the longer seasons and the overall competition level. The transition to SU was ”pretty easy” for Hackett, Peacock said.

“Leaving this program, I was light years ahead of guys that came in with me,” said Clay Burton, Trey Burton’s younger brother, who played tight end at the University of Florida after Venice. He’s now the strength and conditioning coach at Venice. “It’s one of the best schools in Florida, so you’re going to play the best teams, the best players.” 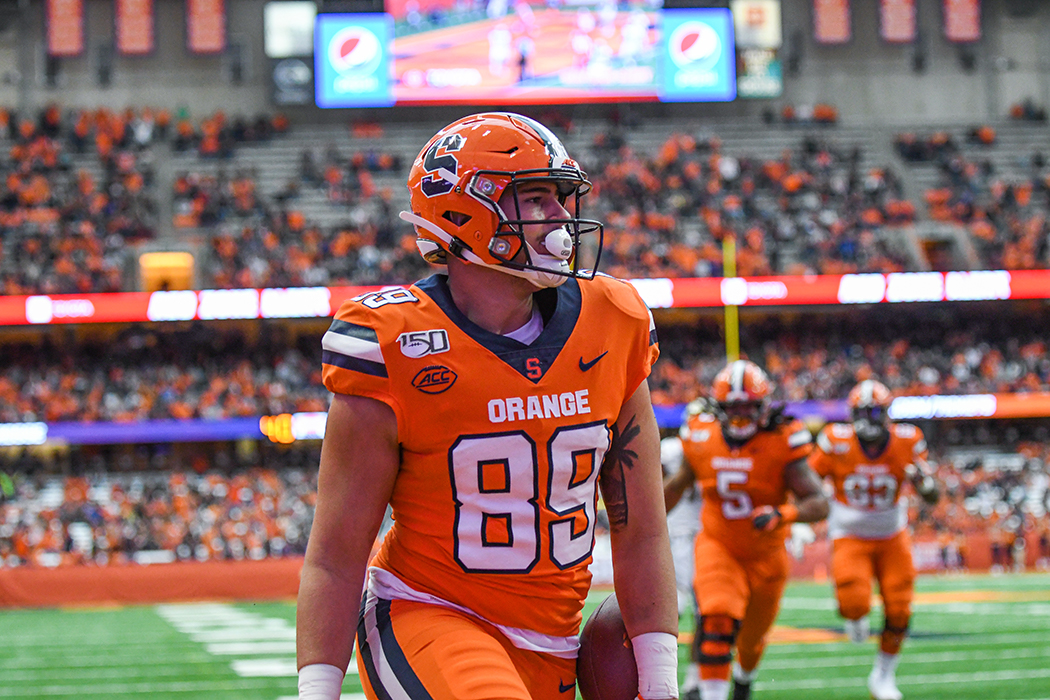 But David Hackett wasn’t sure his son would ever play football. He described them as a basketball-first family. Aaron Hackett’s older brother, Anthony, and sister, Laura, both played basketball growing up. Laura Hackett earned a Division I scholarship and often beat Aaron Hackett one-on-one growing up.

Aaron Hackett was born in Indianapolis, but the family moved to Venice when he was 5. Basketball isn’t the primary sport there. Instead, football is deeply ingrained into the culture, and his parents, David and Kimberly, dropped him off at his first full-contact football practice when he was 6 years old.

When the Hacketts returned to watch the practice, David Hackett spotted his son running down the sideline with the ball.

“Aaron is a running back?” David asked the coach.

“He’s the best player on the team,” the coach responded. 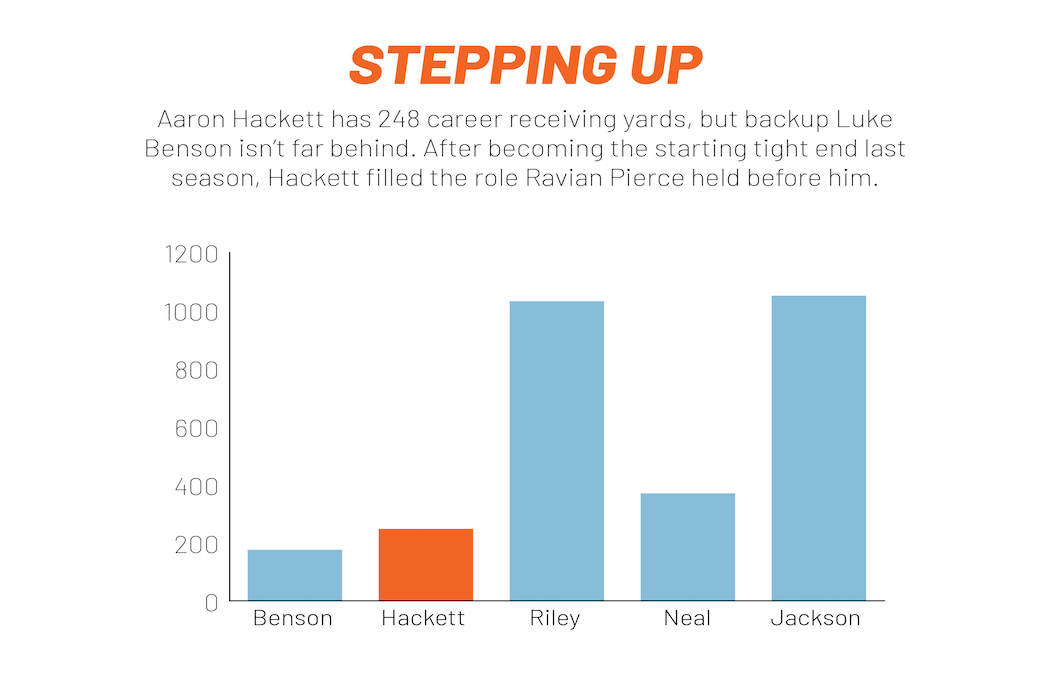 Aaron Hackett played running back until his sophomore year of high school, when Peacock switched him to tight end — his plan all along. The next season, Wales joined Venice’s staff. As a young coach recently removed from a D-I program, he became one of Aaron Hackett’s closest mentors. He knew right away where his biggest weakness was as a tight end: route running and making catches.

One practice, the tight end group attempted ‘stick up’ routes where Hackett was supposed to run a five-yard out route, then make a double move straight up the field without crossing his feet up.

Repeatedly, he failed. Wales quipped that he looked like a “baby deer falling all over the ground.” One time, right before Aaron Hackett was about to throw his helmet in frustration, the tight end coach called him over to the sideline.

“It was a really intimate type of conversation, player to coach,” Wales said. “He really shut his mind down and listened to what I suggested. Aaron is the kind of person who can really understand the message you’re trying to get across.”

A few tries later, he properly rotated his hips and ran the route correctly without stumbling over his feet. 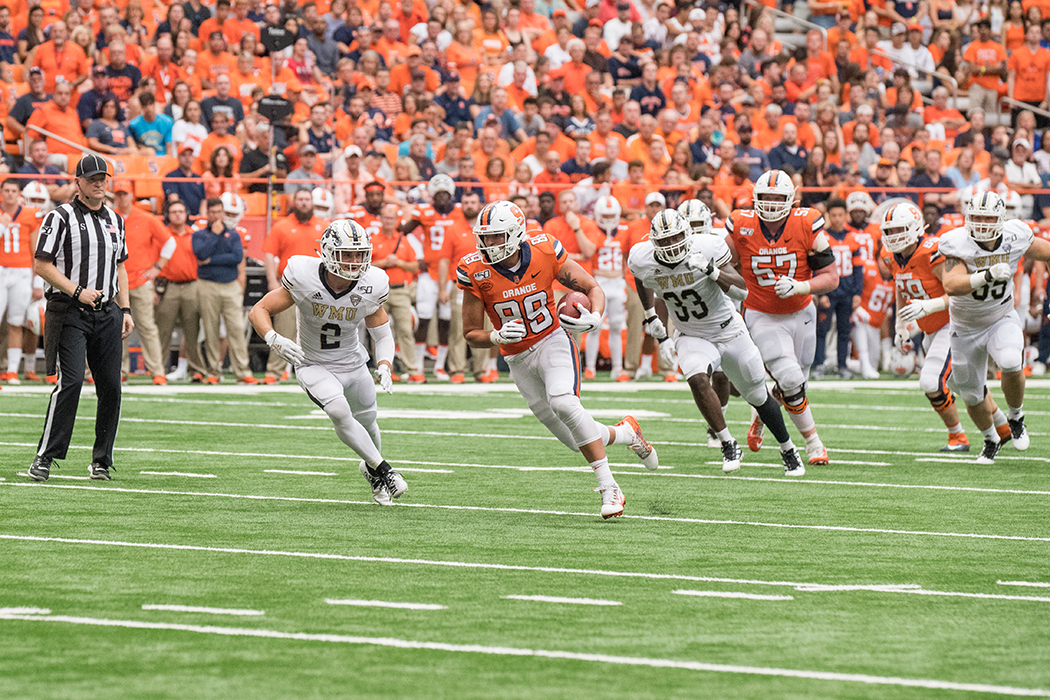 The tight ends that Aaron Hackett closely watched while growing up had become his coaches, mentors and friends at Venice. Burton and Wales were impressed by the changes they’d seen in his ability to generate separation from faster defensive backs.

“Young people are really impressionable,” David said. “The expectations were that, this is what being a good high school player at Venice High School looks like, and if you want to be one, you better be like this.”

“The bar is set pretty high,” he said.

When he arrived at SU, Aaron Hackett was expected to block first. It’s always come much easier to him than route running. He played behind Ravian Pierce his first two seasons before starting in 2019 and catching 23 passes and six touchdowns for 205 yards.

He sent his dad videos — most notably with his improved route running — of Syracuse’s three spring ball practices before the coronavirus pandemic forced players home.

“It was like watching a different player,” David Hackett said. “It was quite eye-opening to me to see the real sophistication and level of science they are bringing into this.” 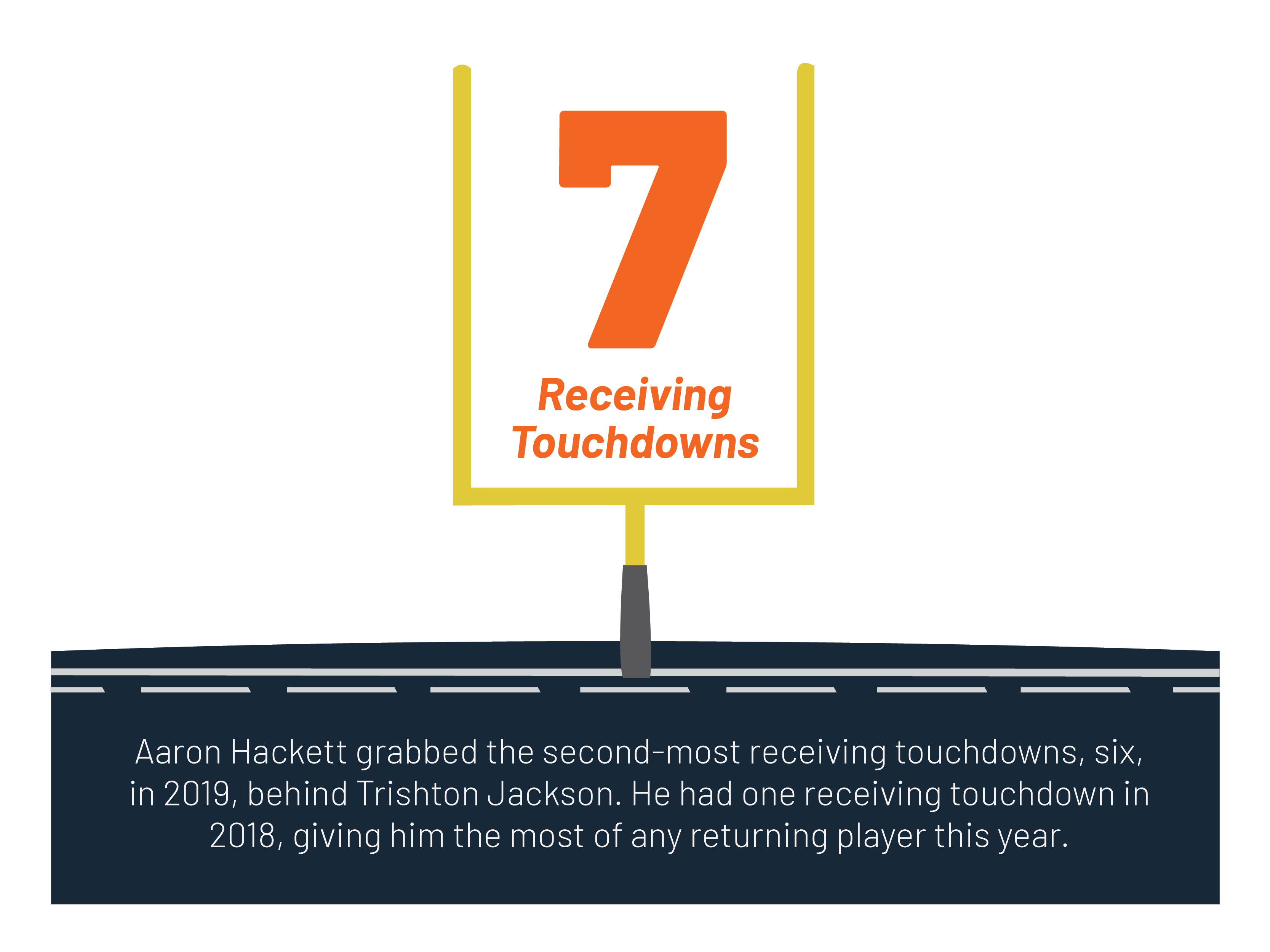 Even though the Hackett family’s workout studio was closed to the public due to the pandemic, Aaron Hackett went there to work out by himself. He did TRX and yoga at the studio and used the family stairmaster in the garage.

Once some restrictions eased, he went to Fort Lauderdale to train at XPE Sports. A daily morning strength workout was followed by an afternoon speed workout. Hackett often hit the beaches for sand workouts and received lessons on route-running and timing from 14-year NFL receiver Anquan Boldin. He was often around NFL pros Travis Kelce and Mark Ingram. They focused on route running, timing, patience and how to move most efficiently and generate separation.

“When you’re making a break, don’t misstep here, don’t step outside your body, don’t lose separation,” Aaron Hackett said. “If you can position your body and move the right way, you can gain leverage and gain steps on them.”

He’s maintained contact with his former Venice coaches, and they’re checking up on him, too. Burton has Syracuse score alerts on his phone so he can track his progress. Peacock hosted the SU senior in his office a few months ago to talk about the upcoming season.

And last winter, when Aaron Hackett returned home, he worked out and threw the football around with Burton at the Venice facilities.

“He was trying to pick my brain and ask how he looked,” Burton said. “He looked the best I’ve ever seen him.”