After Brett Kennedy fired a shot in the opening quarter that nearly found the net for a rare long-pole goal, SU regained possession and regathered. Peter Dearth collected the ball near the top of the box and saw Owen Seebold at X. The attack darted, beginning his run toward the front of the cage, and Dearth launched the skip pass.

Seebold collected it at the crease — behind the two Robert Morris defenders — and slotted one past the goalie from point-blank range. He grinned as his goal song rang through the Carrier Dome, the score marking the fifth that the Orange notched during a nine-goal first quarter.

Syracuse defeated Robert Morris in its final game of the regular season Friday, hours after Chase Scanlan was arrested and charged with criminal mischief following his involvement on April 18 in what the Department of Public Safety described as a domestic incident. Scanlan was the team’s leading scorer before his suspension and April 26 reinstatement. Minutes before the game, SU Athletics announced that Scanlan had been suspended again “from all athletic participation” due to his arrest.

During his midweek press conference, head coach John Desko said the situation was an ongoing distraction for the team. He said he was trying to get his players to focus on scouting Robert Morris at practice and watch film. On Friday afternoon, Desko said he was disappointed with the team’s first-half focus but pleased that the players settled down during the second half.

For the Orange’s third straight game without Scanlan, Syracuse (7-5, 2-4 Atlantic Coast) prevailed over Robert Morris (7-6) behind Seebold and Owen Hiltz, who combined for 12 goals and 16 points in SU’s victory. SU’s attack scored two-thirds of its goals in the victory.

“The combination is good,” Desko said of Hiltz and Seebold, who has filled Scanlan’s sport. “Their understanding of the offense — they do well and work well together.”

Syracuse finished with more shots on goal (41) than Robert Morris had total shots (39), and it never trailed on Friday afternoon.

At the end of the first half, Stephen Rehfuss started at X and came around the face of the goal-line. Through contact, he picked out a skip pass to Seebold, who was waiting on the other side of the crease. The RMU goalie couldn’t move from the left post to cover his other side quickly enough, and Seebold stretched to reach the high pass before dunking the effort for SU’s 14th goal.

At the faceoff X, Jakob Phaup won 24-of-32, his second-best performance of the year, and a career-high 16 ground balls. To start the second quarter, he was flattened on an illegal body check from a Colonials’ wing and laid motionless for a moment before rising to his feet and jogging off the field with the trainer moments later. Phaup missed three faceoffs, where backup Danny Varello filled in, before returning. 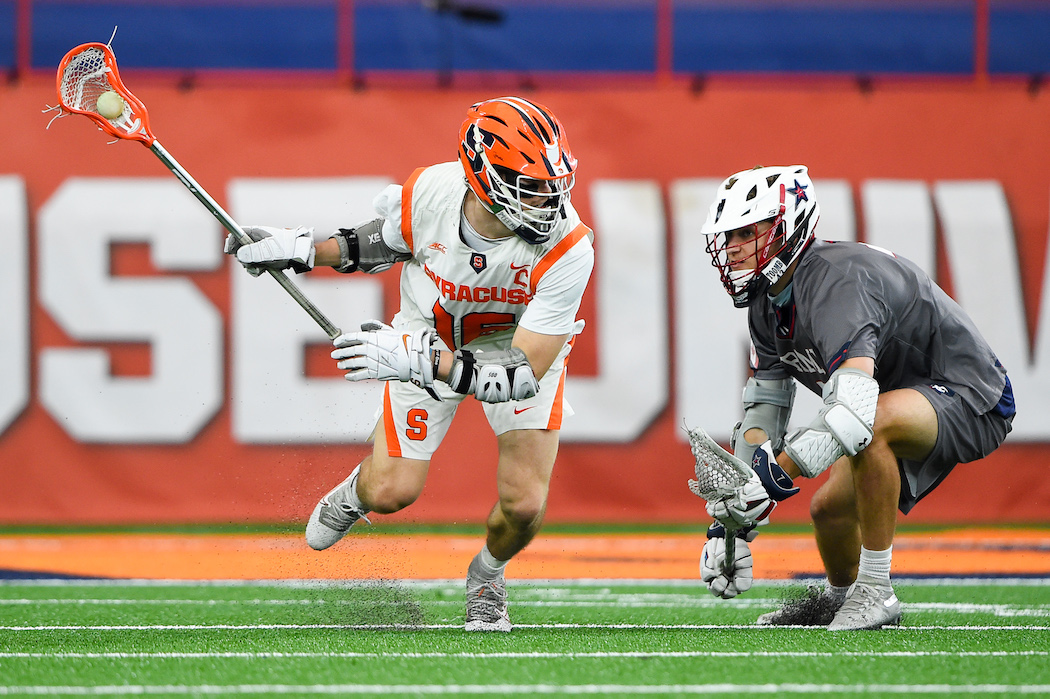 On multiple occasions when Phaup wasn’t fouled, he couldn’t cleanly collect the loose ball and instead turned to his wings, such as Dearth and Kennedy, to finish the job for him. Friday marked the third time in the last seven games that SU won the faceoff battle.

“Our wings played very well the times that Jake got out and there was a loose ball. Our wings made some good plays, we got some transition off of it,” Desko said.

Earlier in the season, the Orange struggled to generate offense when they didn’t gain enough possessions. That wasn’t an issue Friday, as SU dominated the ball — and was productive with it. Jamie Trimboli recognized Jake Boudreau charging toward him with the ball at midfield early in the game and stood up tall, sending the midfielder tumbling backward.

Trimboli charged for the loose ball as Rehfuss connected with Seebold at X. The new attack came around the front and dispatched a top-shelf effort to put SU up 3-1.

“Now he’s back where I think he’s strongest, behind the goal,” Desko said of Seebold postgame. “He’s a big, physical guy and creates some matchup problems for other teams’ defenses.”

The Orange tied their season-high mark of 20 goals early in the fourth quarter, when Lucas Quinn took a weak, bounce shot that the RMU goalie turned away in front of his net. Hiltz was there to clean it up, slamming the rebound into the net for his seventh goal.

“He understood their slide package, put himself in spots where he knew his guy was going to slide from, got to the open space and obviously scored seven goals today,” Desko said of Hiltz.

Syracuse’s offense varied its pace of play, interchanging bursts of speed with slow, patient passing. In the second quarter, Brendan Curry exploded down the left sideline, using his pure speed to gain multiple steps on Colton Lidstone before rifling a shot across his body into the top right corner. He tried to do it again in the fourth quarter, again charging straight ahead and outpacing defenders, but his effort flew just over the top and ended with him placing both his hands on his helmet in disbelief.

In the final minutes of the first half, Kennedy scooped up a loose ball on one faceoff after two RMU players missed and charged into the empty space. He found Rehfuss, who found Hiltz and unloaded an easy goal that put SU up by four.

And as the final buzzer sounded, fans rose to their feet and applauded the Orange, who jogged onto the field and high-fived. Syracuse walked back to the locker room, and the team will now await its NCAA Tournament fate during Sunday’s selection show.

“I was just with the guys in the locker room and talked with them, a lot of smiles on their faces,” Desko said postgame. “I think they’re happy with where they are and where they’re going.”