The void at wide receiver every offseason has become a nonissue in the Dino Babers era. In each of his first four years, a previously unproven wideout becomes the quarterback’s favorite target, torching defenses as the go-to guy for Syracuse.

“It’s an open slate,” Babers said before Syracuse faced UNC. “It’s a clean chalkboard every single year and then whoever wants to write their name up there in capital letters can do it.”

First it was Amba Etta-Tawo. Then Steve Ishmael, Jamal Custis and Trishton Jackson nearly all wrote their names atop that board in the first four years of Babers tenure with 1,000-yard seasons. This year, it’s unclear who that is — if it’s anyone.

The first game against No. 18 North Carolina on Saturday did not provide any answers. Taj Harris was presumed to be that next-up receiver for Syracuse (0-1, 0-1 Atlantic Coast Conference) but didn’t perform up to expectations. Quarterback Tommy DeVito struggled to find open receivers all game, often taking sacks or holding onto the ball for too long before throwing it away. He ended up with a 41.9 completion percentage, the worst of his career when he’s thrown more than five passes. Receivers failed to beat corners one-on-one, dropped passes and had the ball hit their helmets as they failed to turn around in time.

With such a young and unproven team, Syracuse should refocus the passing game around its two tight ends — Luke Benson and Aaron Hackett — or, at the very least, design more plays to target them. Neither Hackett nor Benson caught a ball on Saturday, with the two thrown only two balls combined.

“Sometimes teams are trying to take away targets,” Babers said after the Orange’s loss. “And based off of coverages and where guys are moving in space, the ball may go to someone else who’s shorter or may be one of those throws where those guys are behind them and we’re throwing one of those balls that wasn’t connecting.” 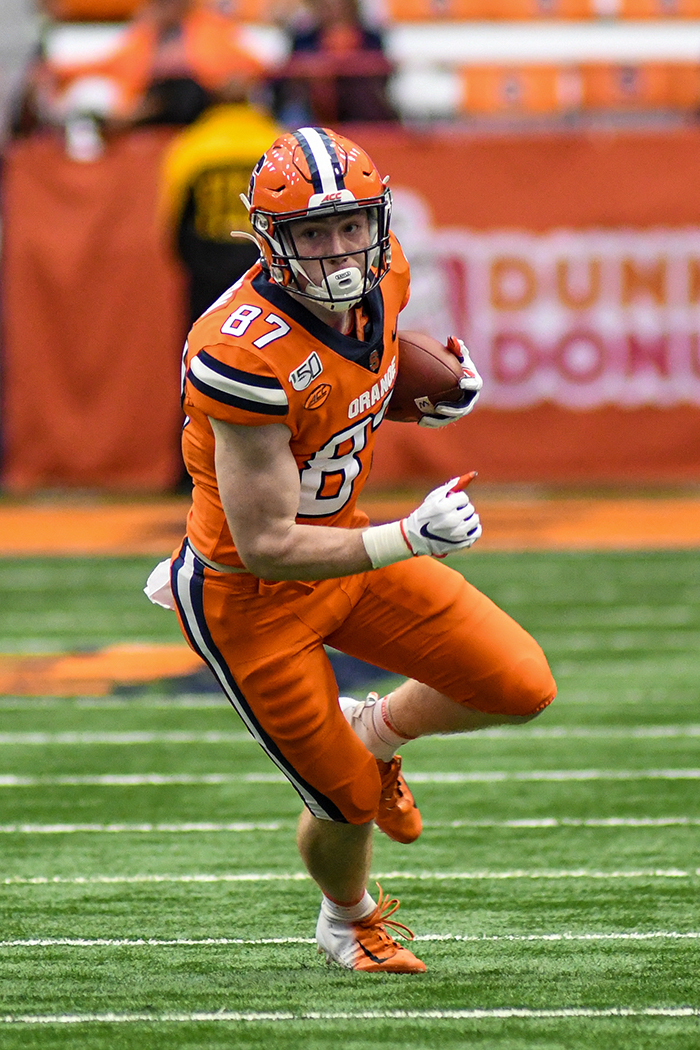 Entering this season, Harris had the most career receiving yards by far, tallying over 500 in both of his first two seasons. He showed flashes against UNC — including a play where he spun around two defenders and broke three more — but didn’t look like a reliable No. 1, catching five balls on 15 targets.

Later, DeVito found a wide-open Sharod Johnson in the end zone, only for the ball to slip through his hands. Not to say the quarterback didn’t miss throws, too — he did, and Babers admitted it.

“Everybody can catch the football. That’s the best part,” DeVito said on Tuesday. “It’s a big step for the older guys just for the first game.”

Hackett snagged six red-zone touchdowns last season. Syracuse had three trips inside the 20-yard-line on Saturday and came away with two field goals. DeVito had an opportunity in the third quarter to find Hackett on a crossing route in the end zone and instead took a sack. While Hackett is used as more of a blocking tight end, he’s useful in the play-action game in the red zone, partially why he was so dominant in short-yardage situations last season.

Benson, on the other hand, is the faster of the two, often able to beat linebackers in man-to-man coverage and even outran defensive backs at times last season. That skillset could be easily utilized if he can find the ball in the open field.

New offensive coordinator Sterlin Gilbert flashed the creativity necessary to confuse a defense against UNC. Hackett often lined up beside the left tackle or a step back behind the offensive line to help protect DeVito. With DeVito struggling to stay upright in the pocket, he drew up roll-outs and plays to utilize the quarterback’s speed. He also put running back Jawhar Jordan about 15 yards back from the line of scrimmage, only to get a running start while catching a swing pass from DeVito.

“Sterlin’s extremely aggressive, and I’m okay with that,” Babers said. “In that aggressiveness, we had opportunities to make plays.”

But if he wants to score more points, he needs to get two of his most-reliable pass-catchers involved. Babers said SU didn’t plan to not throw Hackett and Benson the ball, but he also didn’t say that the coaching staff did.

The post Hillman: Tight ends must become a focal point if Syracuse wants to score appeared first on The Daily Orange.