A walk outside the Carrier Dome on a typical home opener features the smell of grilled hotdogs, the sight of orange and blue apparel and the sound of a booming stereo. Syracuse students and fans from across the region arrive to celebrate the end of summer and the return of college sports.

But this Saturday, the opening of the renovated Dome was silent. Only one student in a dark blue Syracuse shirt strolled through the Quad at 10:30 a.m., a time when tailgaters traditionally converse as the marching band plays the fight song on Hendricks Chapel’s steps.

I attended the first football game in the newly renovated Dome and saw the empty seats, heard the fake crowd noise and watched what seemed like an average college football game. I also witnessed the kickoff between Georgia Tech and Syracuse being postponed by 35 minutes to retest three Syracuse football personnel for COVID-19.

Though the circumstances were strange, that’s how they should be. Bringing fans back at this moment could impede New York states impressive recovery from the horrific spring. Starting a game with uncertain test results could be catastrophic. Both could also pop Syracuse’s bubble, as the university has kept active COVID-19 cases under 100 for the first five weeks of the semester. As peculiar and contrived as covering a game with no fans was, it was necessary.

The entrance process started in a white tent across the street from the Carrier Dome, in between the SUNY-ESF campus and Sadler Hall. Temperatures were taken with an infrared thermometer, and workers asked reporters the obligatory questions: Have you been exposed to COVID-19? Do you have symptoms? There were no tailgaters or fans awaiting admittance into SU’s game against the Yellow Jackets.

Inside, the stadium was no different. Concession stands were shuttered, drink vendors were nonexistent and the only people standing around were security guards to halt any nonessential personnel. Director of Athletics John Wildhack greeted one of the security guards outside the press box, wearing an orange mask and a dark blue suit and bumping elbows to show his appreciation.

For the last two years, Syracuse developed and underwent the first phase of a $118 million renovation project. The brightness of the new lights shone through the Dome, illuminating its green turf. The natural light from the new roof created a modern atmosphere.

Fake crowd noise was rehearsed for the game 90 minutes before kickoff. Boos and jeers rained down as Syracuse offensive lineman did high knees during warm-ups. Then cheers were played as Georgia Tech receivers caught passes from Yellow Jacket quarterbacks. 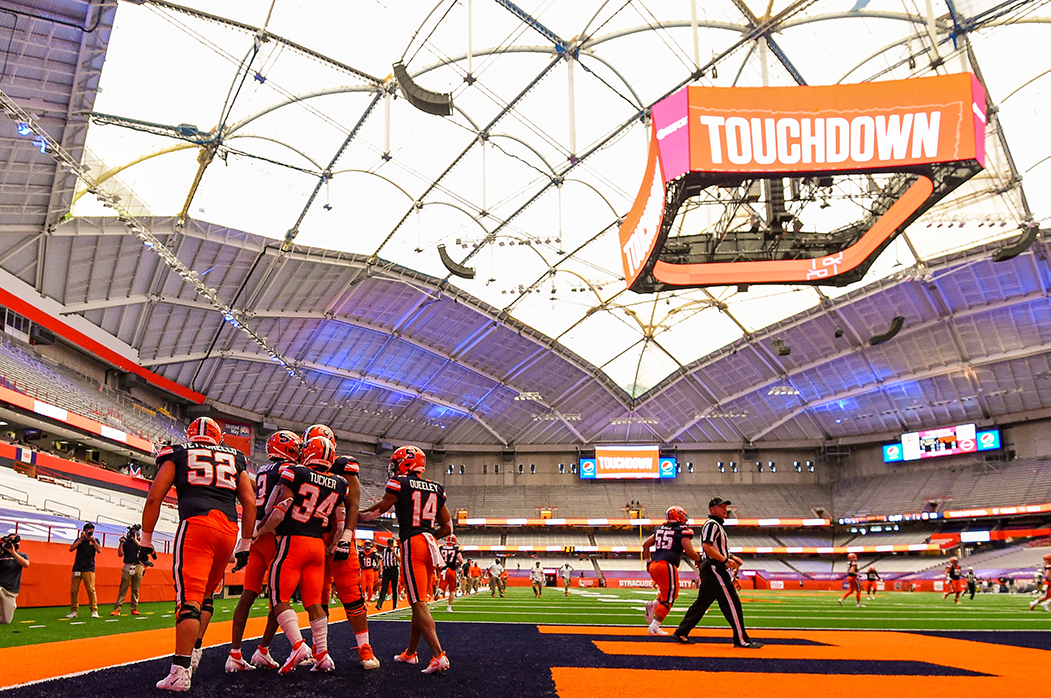 That noise escalated during the game. Georgia Tech’s third downs seemed louder than Syracuse’s upset over Clemson in 2017. Unlike normal games, where the roar is authentic and builds up during marquee plays, this one was sudden and sometimes lasted longer. Babers said he lost his voice because the stereo systems were so loud that he had to scream all game.

“I think someone with the volume control was showing off,” Babers said. “No one could hear what I’m saying.”

Just below the roof and speakers is the jumbotron. The four-sided videoboard — each 62.5-feet wide — stands 20-feet high and shows highlights in high definition. It’s the largest center-hung scoreboard in a collegiate stadium. Junior defensive back Trill Williams said it was his favorite addition, and he often caught himself glancing at the screen, only to refocus himself back to the game.

This experience was novel enough. But as the game approached, the players were nowhere to be seen. They played the pregame hype video narrated by Zaire Franklin and the national anthem, preparing for Syracuse to sprint out of the tunnel. But Babers called his team back to the locker room.

The next half hour was surreal. Was there going to be a football game that day? What happens if there’s an outbreak within the team? Are both teams now at risk because they were on the field at the same time? Reporters scoured social media, looking for any new breaks.

On the field, only SU redshirt players remained. The Georgia Tech sideline was vacant. Managers tossed a football around as pop songs played through the speakers. An Atlantic Coast Conference line judge even did crunches as expectations to postpone the game grew. But then the players ran out of the tunnel, and suddenly there was a football game to play.

The game itself was fairly typical: SU’s defense stifled the Yellow Jacket offense in a 37-20 win, creating five turnovers. The offense finally found rhythm on the ground, and Tommy DeVito responded by throwing two long touchdowns.

I wrote in July, that Syracuse shouldn’t hold fans for the entire 2020 season. New York state has avoided any further outbreaks because of the precautions, not in spite of them. Keeping the measures in place for three more months may prevent any further spread before the winter, a season that health officials have feared since the initial outbreak in the spring.

If covering lifeless games with no one in attendance and having kickoffs delayed continues, so be it. Saturday was the first one. But five more would be preferred.

The post Hillman: SU’s win over GT was historic. It was more bizarre in person. appeared first on The Daily Orange.