Director of Athletics John Wildhack and Syracuse are planning to fill the Carrier Dome with fans, to some degree, this fall. But they’re making a huge mistake.

Even with possible precautions, like blue and orange Syracuse-themed masks or temperature checks, fans could be asymptomatic and spread the coronavirus.

“We are anticipating and planning for reduced capacity to some degree for football season,” Wildhack said in a May 28 email to season ticket holders.

Wildhack’s comments aren’t surprising. College football is a business at its core, and its main priority is to make money. For Power 5 teams, football ticketing accounts for 14% of a public school athletic department’s annual revenue, according to a 2017-18 study from the S.I. Newhouse School of Public Communications.

And from Wildhack’s perspective, if Syracuse can make money while limiting the spread of COVID-19, it’s a win-win. Revenue shouldn’t be anyone’s utmost concern at the moment, though.

As of early July, COVID-19 has killed over 130,000 Americans. Recent spikes in Texas, Florida and Arizona are a sign that the United States has yet to defeat the virus that threatens to stop the college football season before it even begins. The Big Ten on Thursday announced conference-only scheduling for fall sports and the Atlantic Coast Conference delayed competitions for Olympic sports until Sept. 1.

Not only is it unsafe to put fans in the seats, it also poses a significant health risk to the greater community.

Gov. Andrew Cuomo announced July 2 that the Buffalo Bills, New York Yankees and New York Mets wouldn’t be allowed to have spectators for their 2020 seasons. Cuomo didn’t specify any recommendations for college sports teams, and his office didn’t return The Daily Orange’s requests for comment.

The Bills play at New Era Field, an outdoor venue that usually hosts around 71,000 fans for any regular-season game. While these guidelines may shift in the coming months, they raise questions about why SU would be allowed to have fans when professional teams can’t.

Syracuse and UTSA are the only FBS teams to play in a closed environment. When people chant, scream or even speak, virus droplets are expelled into the air and can latch onto different carriers, Kmush and Larsen said.

Kmush said that everyone in attendance should wear a mask, but doing so may not be sufficient for preventing the spread of the virus. An article published late May in the International Journal of Nursing Studies cited that face masks “were effective but not if worn intermittently.” That leaves little room for human error.

Requiring face masks upon entry is simple, but ensuring they stay on during a four-hour game is almost impossible to police. Yet, Kmush is even warier of maintaining social distancing when fans aren’t seated.

“My main concern comes with the restrooms, entry and concession stands,” she said. “Let’s say there’s one-third of fans in the Dome and everyone will be social distancing. How long is that going to take for everyone to get to their seats? How are they going to keep people socially distanced while they use the restroom?”

“I wouldn’t feel safe attending a game this year.” 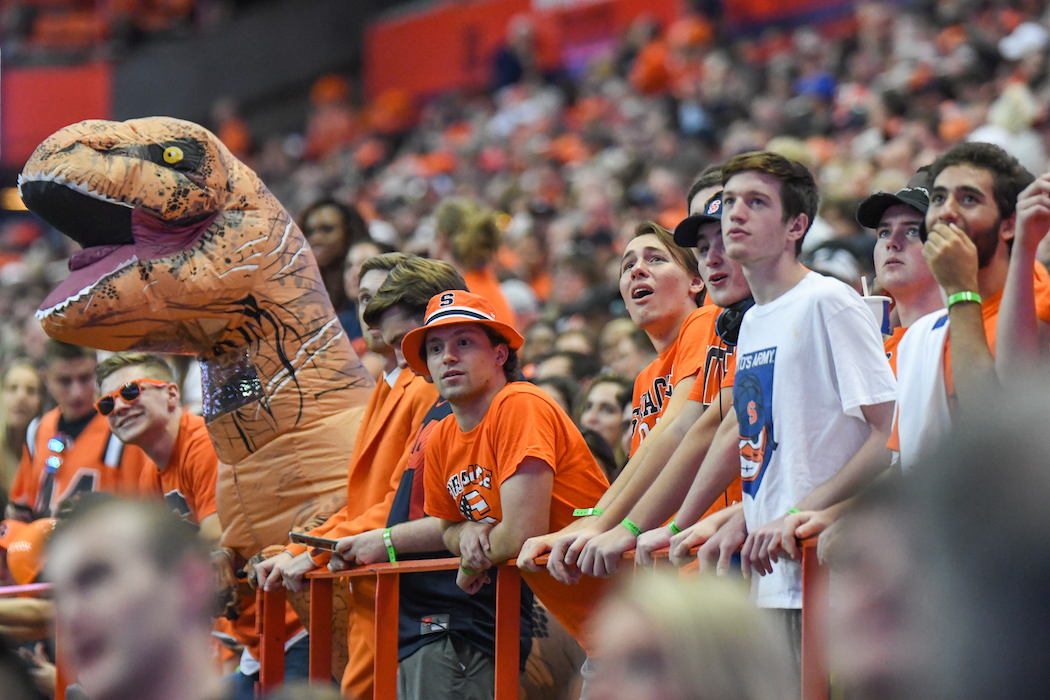 Gov. Andrew Cuomo announced on July 2 that professional teams in New York will play their 2020 season without fans. That guideline didn’t apply to colleges, though. Max Freund | Staff Photographer

A Dome filled to one-third of its capacity would seat about 16,000 people. Staggering entrances were already a mainstay for SU games — students enter through one entrance, outside fans through others, media though a third. European soccer teams have been operating with a much stricter version of this mandate for years.

These regulations could conceivably work. Imagining a situation where SU welcomes some fans back in the fall to a highly organized event is easy —  especially given that New York state on June 28 had the lowest seven-day average of positive COVID-19 tests in the U.S., according to Johns Hopkins Coronavirus Resource Center.

In theory, the Carrier Dome could hire extra staffers to implement health and safety policies. A Texas barbecue restaurant has hired a bathroom monitor and the McDonald’s chain requires franchisees to sanitize toilets and sinks every 30 minutes, according to The Washington Post.

But hypotheticals, at this stage of the pandemic, aren’t enough to placate concerns. All it takes is one asymptomatic or pre-symptomatic fan to trigger an outbreak. If one infected person takes off their mask, COVID-19 could spread to the surrounding fans. That scenario is a nightmare waiting to happen, Larsen said.

“What you definitely want to avoid is a super spreader event,” he said. “These random contacts pick it up and spread it to their social networks. That would be impossible for a contact tracer.”

Preventing a massive spread of COVID-19 is the reason SU must play behind closed doors this season. There will be considerable financial ramifications, but at what human cost? Why have thousands of fans in the Dome only to potentially take steps backward in New York state’s impressive recovery from this deadly spring? At what point are human lives more valuable than a dollar bill?

Wildhack was pressed in June about allowing fans in the stands. His initial reaction wasn’t a reassurance of Syracuse’s commitment to public health. It was a “we’ll wait-and-see” response, along with a justification for why they should welcome thousands into an enclosed environment.

“We’re still three months away. Almost 100 days,” he said. “We’re working on various models in terms of seating capacity as every venue around the country and around the ACC does.

One hundred days ago, the numbers in New York state looked far grimmer than they do today. One hundred days from now, they may look very different. If Wildhack and SU are committed to brightening that portrait, they’ll play the season without fans.

The post Hillman: Putting fans in the Carrier Dome this fall would be reckless appeared first on The Daily Orange.