Chris Elmore said his first quarter back after a four-game hiatus was filled with “jitters.” He looked rusty during the opening 15 minutes of Saturday’s game against Florida State, head coach Dino Babers said. But that was expected.

Elmore missed the Orange’s first month of the season for reasons unrelated to injury or discipline, a source with knowledge of the situation previously confirmed to The Daily Orange. Elmore said the absence was due to “personal reasons,” but “what was done was done, now I’m back, and all I can do is move forward.”

The fullback, tight end and former offensive and defensive lineman chose to return for a fifth season but had to wait an additional month to make his reappearance on the field. The Chicago native said he missed just about every block in the first quarter in Tallahassee — and Babers reiterated that — but both agreed the next three quarters were proof of what Elmore’s capable of adding to SU’s already potent run-game.

“After the first quarter, I was back to being the regular Rhino,” Elmore said after Saturday’s loss, referencing the nickname “Rhino” that many teammates and coaches call him.

Syracuse (3-2, 0-1 Atlantic Coast) lost its first game with Elmore back at Florida State, 33-30, on a game-winning field goal as time expired. But the fullback and tight end’s return is important for SU moving forward because of his role as a “super senior” and leader, Babers said. Elmore adds to an attack that already features Sean Tucker, whose 638 rushing yards is the third-most nationally, and Garrett Shrader, who’s quickly emerged as a running threat and the team’s second-leading rusher.

“Having me back was a big key, just going into practice and knowing that I would be back and knowing that we could get the run game started,” Elmore said after the FSU game. “It was an extra offensive lineman to the point of attack.”

Elmore knew his absence would last until the end of nonconference play. The hiatus was mentally tolling, and there were a few “dark moments,” he said, but knowing there was light at the end of the tunnel kept him going. Having positive friends, family and teammates to prevent him from going “too deep in the hole where I didn’t want to talk to nobody and shut everybody out” helped too, he said. Mikel Jones and Darius Tisdale motivated him by dedicating each game to him until he returned. If Elmore saw them slacking, they wanted him to let them know, Elmore said.

“They kept count better than I did of when I was going to return,” Elmore said. “It just goes to show, the type of positive people, if you have the right people around you, you’re in the right mindset, you’re good.”

The week leading up to his return was much anticipated. Before the Florida State game, offensive lineman Matthew Bergeron said, “If you thought the run game was good, wait till you see when Elmore is back” and compared the fullback to a mobile, sixth offensive lineman. That whole week at practice, Elmore was “flying around” and “putting guys on the ground,” Bergeron said. 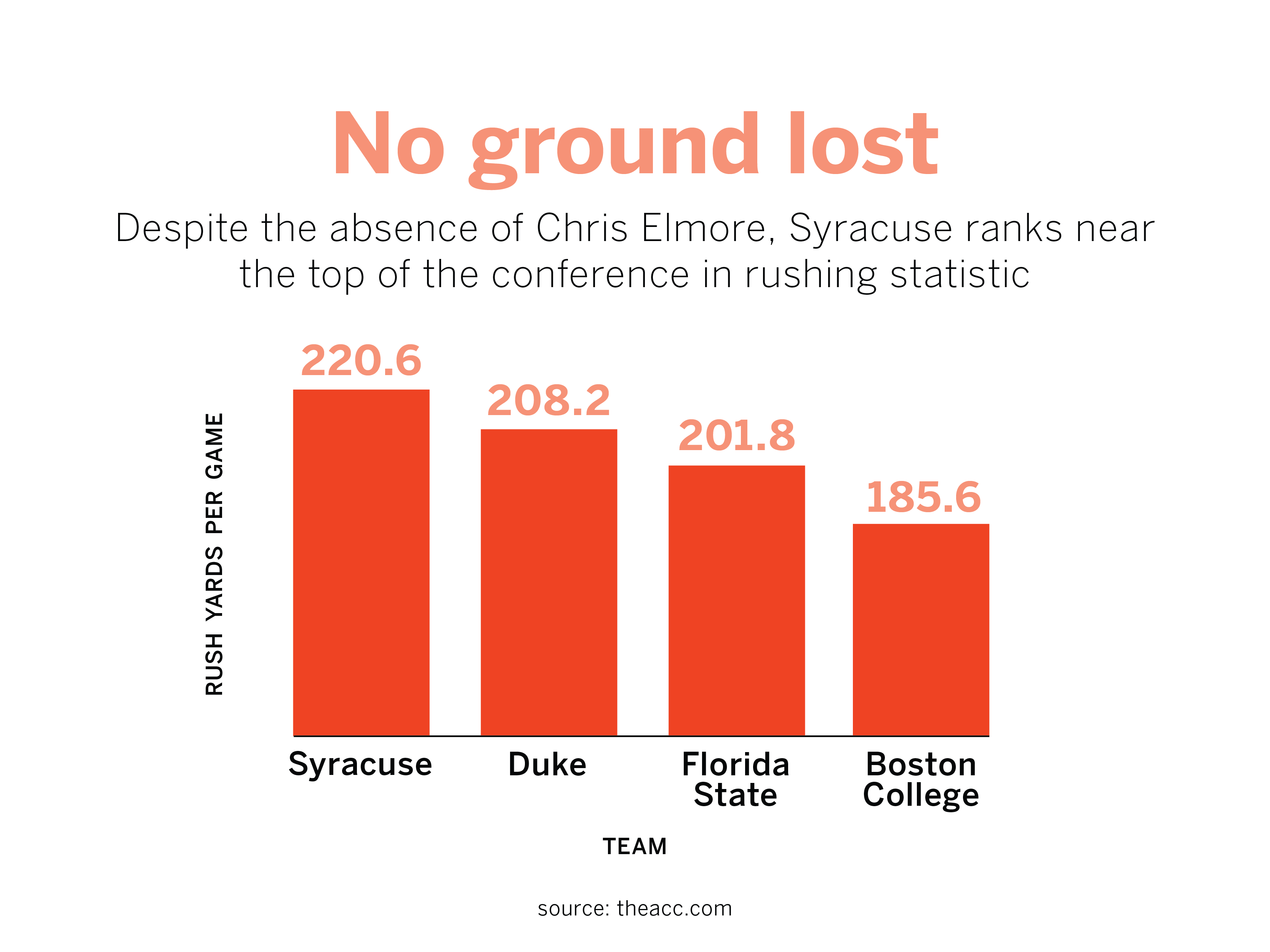 Elmore knows his presence brought an added level of energy to SU. But initially, when Elmore found out the day before the Orange’s season opener at Ohio that he couldn’t play, he called his father and cried. The hiatus was “through no fault of his,” his father, Clinton Elmore, said, and Elmore was distraught that he was unable to help Syracuse in his final year of eligibility.

Elmore continued to work out and do what he could from the sidelines. That meant traveling to Athens, Ohio, even though he couldn’t play. It meant continuing his role as a captain, giving pregame hype speeches and leading the team out of the tunnel.

“Obviously it did hurt me a lot that I couldn’t be out there and play with them, but once I got out there, I saw the bigger picture — it’s not about me anymore, it’s about these guys,” Elmore said. “What’s done with me is done, and I just gotta focus on making sure these guys’ heads (are) straight.”

Against Florida State in the first quarter, Syracuse’s offense managed just 18 yards on the ground. Elmore was in from the very first play, peeling off the left side of the offensive line and blocking for a short 4-yard gain by Tucker. But it was during the second quarter on Shrader’s 55-yard touchdown run that Elmore’s impact began to show.

Elmore started the play matched up against FSU defensive end Jermaine Johnson, then the nation’s sack leader. The 265-pound fullback used a powerful two-handed block to shove Johnson away from the line of scrimmage as Shrader rolled to his right after play-action. That delayed Johnson’s ability to make the play, allowing Shrader to slip by the tackle. Then Elmore turned upfield and set the key block against linebacker DJ Lundy, tackling the redshirt freshman and springing an open lane for Shrader to cut left and take it to the house.

The fullback sprung Tucker for a 10-yard gain later, too, and sealed the right edge for a 16-yard Shrader gain later in the first half. Elmore also served as the lead blocker on his quarterback’s 5-yard touchdown run moments later.

“It felt good being able to go out there, help my teammates, and just seeing how much better the offense was with me out there,” Elmore said.

This offseason, Elmore cut 20 pounds by working out frequently and watching his diet, his dad said. “Better late than never” was the phrase Elmore used to describe why cutting that weight was crucial for his final year of eligibility.

Elmore may be in the best shape of his life, quarterback Tommy DeVito said in August, and even though Elmore had to wait an extra four weeks, the return of an “unbelievable blocker” should benefit SU’s offense, Babers said.

“We need him back,” Babers said postgame. “He’s the heartbeat of this football team.”