Oh, how the scribes of the Class of 2021 have flourished. And oh, how the Fanboys of yond class have withered. For the fourth successive timeth, ‘twas overjoy, a triumph for the Hacks. Friday just after dawn, after three prior solar cycles without tasting the sourness of defeat, the scribes once again reasserted their superior ranking in a 32-18 thrashing of the Fanboys.

The year 2021, like many before, belongs to the Hacks. For WAER, the incessant feeling of defeat will continue, perhaps without endeth.

“How could you be shocked? There’s the Celtics, the Canadiens, the Yankees. Class of 2021 in Media Cup has to be right up there for best four-peats,” senior scribe KJ Edelman bantered.

The 2021 iteration of roundball was incongruous to any other. The outdo’r enterprise featured a cardboard prism with tally marks to keep score, as the typical whiteboard hath been forgotten. Global sickness, much like that of the Bubonic Plague, pushed the annual clash to just before summ’r. The 9 a.m. Barry Park battle included special guidelines — consumption of more than two alcoholic beverages the night prior meant disqualification, headmaster Edelman informed scribes Thursday.

Alas, scribe Anish Vasudevan violated such rules. “You can still play but you have to Venmo me $10 for every shot you miss,” Edelman decried during his illustrious pregame speech. And when Vasudevan missed a plain-sailing bucket, and later heaved a ternion well beyond the meshed net, Edelman detonated. “That’s $10,” he remarked in fury after each.

Edelman vocalized his “scouting report” before the conquest. “I watched them airball eight straight shots, so they’ve got nothing on us.” The Hacks erupted into pure ecstasy, knowing the truth to these words (the Fanboys would later miss hoards of trifectas and lacked much precision from the 15-foot line). An unknown man, who identified himself as a roundball enthusiast, joined the Hacks’ conquest as an honorary assistant coach. His direction featured moving prose before the battle and during the midpoint pause. 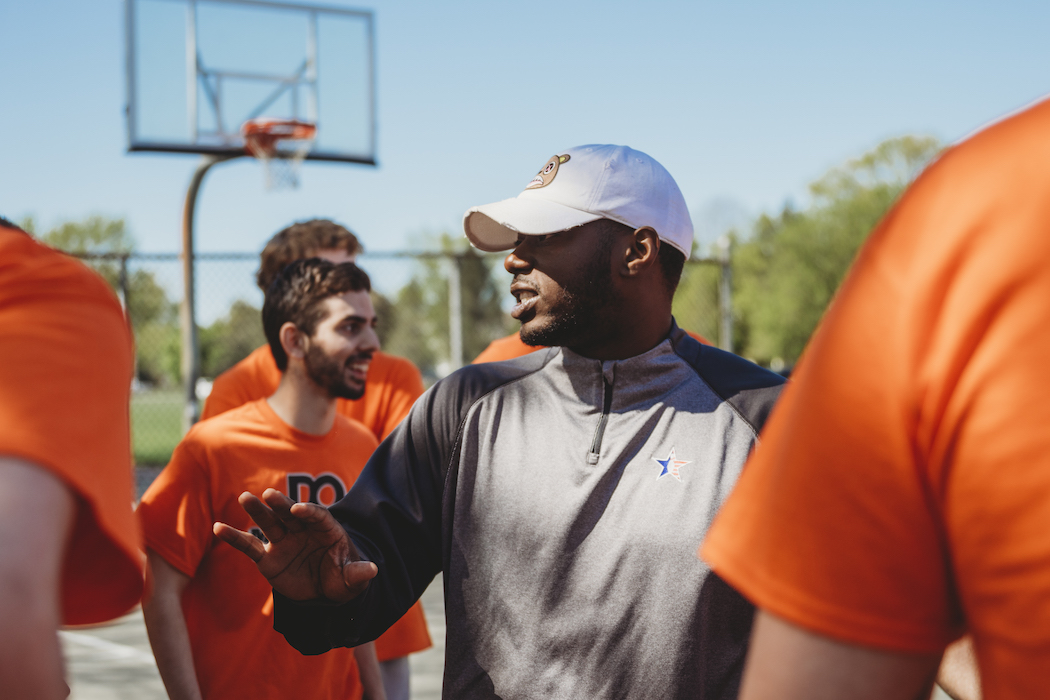 But The Daily Orange’s triumph wasn’t without folly. Before the bisected pause, the Hacks trailed and veteran scribe and preeminent roundball player Danny Emerman had zero points. The Fanboys rough-housed Emerman — and his mates — and forced astray passes and sloppy handling of the orb. Then, after the Fanboys laughable request for a 20-minute break that shall have included brunch at Rise N Shine Diner, the Hacks rebounded.

The helpless Fanboys could only watch as Emerman electrified the court after the pause. Veteran scribes Gaurav Shetty (Big G), Anthony Dabbundo and others joined in too.

“Get f*cked on nerds,” Emerman said, quipping about the Fanboys.

By the time of garbage, senior scribe Eric Storms pranced onto the court. Storms heaved trifecta after trifecta in an attempt to loosen his stiff limbs during warmups — he heard only the whistle of the orb flying through the Salt City air, never the rustle of the orb going through the net. But on the final play of the conquest, the inexperienced roundball player heaved one more attempt. To his disbelief, the orb swished through the net, and the Hacks flooded the court in celebration.

“From the moment our class walked on campus, we refused to lose to WAER. And we succeeded,” Dabbundo exclaimed.

“My favorite one’s the next one,” Emerman decried.

The post Hacks realize quartet of consecutive wins over Fanboys, 32-18 appeared first on The Daily Orange.