In three seasons prior to 2022, Syracuse had a starting goalie. Drake Porter, a former second-team All-American, never missed a start when he became the team’s primary goaltending option his junior year.

During that span, Porter averaged a 52.6% save percentage. His backup for the latter two seasons, Harrison Thompson, only made three appearances. Each time Thompson was called into the cage, the Orange had either put the game out of reach for their opponent or vice versa.

Thompson was slated to start for Syracuse until Dec. 22, 2021, when Bobby Gavin transferred to SU from reigning national champions Virginia.

The competition between Thompson and Gavin continued throughout the season and will remain a tossup into the offseason as Syracuse’s (4-10, 1-5 Atlantic Coast) inability to rely on a consistent starter is tied to its first ever 10-loss season. The Orange finished the regular season with the country’s seventh-worst scoring defense, allowing 14.71 goals per game.

“Goaltending’s never just about saves. It’s about team defense, it’s about what kind of looks these guys are getting,” head coach Gary Gait said on April 13. “Between Harrison and Bobby, we’re trying to help them build their confidence and get them to make some saves.”

At that point, Syracuse had fallen to 4-7 on the season and were a loss away from losing NCAA Tournament eligibility with three games remaining. The Orange had previously suffered an overtime loss to then-No. 6 Cornell where Gavin made eight saves in his second straight complete game of the season.

Syracuse led 11-6 at halftime, but in the second half, a combination of Gavin’s four saves and the Orange only causing three turnovers allowed Cornell to secure a comeback victory in the Dome.

In the 12 games Gavin appeared in this season, he only completed six of them. In two of those six complete games, Gavin recorded a save percentage of 50% or more. He tied a career-high 13 saves in Syracuse’s win over Stony Brook and netted 10 saves in an upset victory over then-No. 11 Duke a week later.

But the following week against Notre Dame, Gavin struggled and was taken out before the end of the first quarter and Thompson filled in for the rest of the game. By the 12th minute of Syracuse’s 22-6 loss to the Fighting Irish, Gavin allowed eight goals on 10 shots.

Following the Notre Dame game, SU dropped every game for the rest of the year. In a two-goal loss to unranked UAlbany, Syracuse’s defense forced Gavin to make 10 saves on 21 shots on goal through the first three quarters. Four days later was the Cornell game, where the Orange defense left Gavin out to dry once again.

“Bobby has been playing pretty well,” Gait said two days after the Cornell loss. “We’d love to try to help him defensively so we can get those sort of things.”

Gavin started his sixth straight game on April 16 against then-No. 15 North Carolina but made only five saves on 21 shots on goal in the Orange’s second consecutive back-and-forth game. After 51 minutes, Gavin was pulled. Thompson, despite letting in the final score that allowed the Tar Heels to secure a one-goal win, made two saves, as many as Gavin made in the first half. 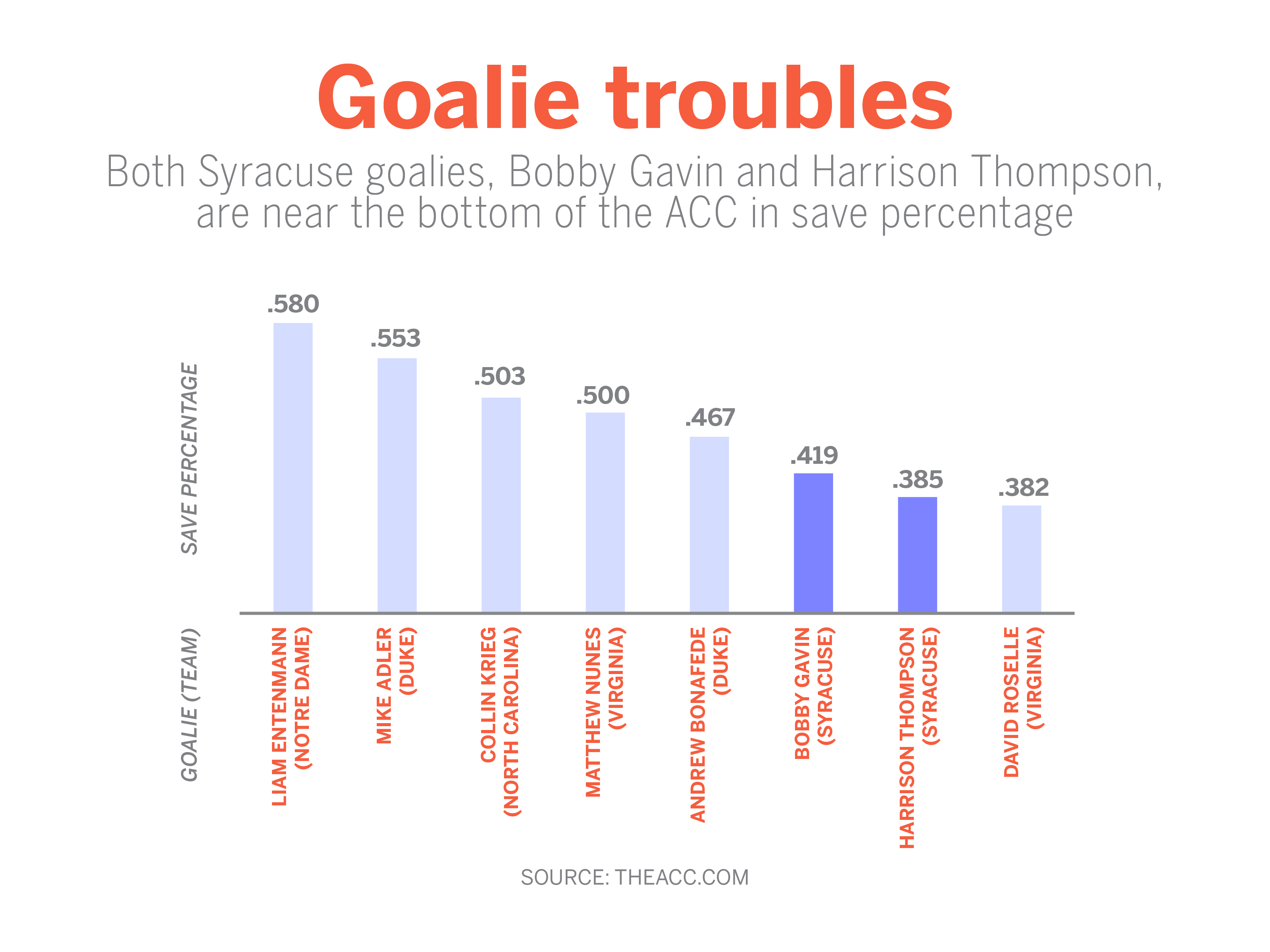 That was the last time Gavin played the majority of a game all season. In fact, he played only seven more minutes in the season. He started the following week against Virginia, but was pulled after an early 5-1 Cavaliers run where Gavin stopped one shot. After substituting Gavin out, Thompson finished with 10 saves, his first collegiate double-digit save performance.

Thompson earned the start in the final game of the season against Notre Dame and played the whole game after another 10-save performance in the Orange’s 18-11 loss. On April 13, Gait said that Syracuse had been playing as well as its opponents in the net. But on the other end, Fighting Irish goaltender Liam Entenmann made a career-high 22 saves.

Next season, Syracuse will add four-star recruit Jimmy McCool to that tandem. McCool was the Orange’s fourth Class of 2022 commit and has appeared for Team USA at the youth level.

Still, as Syracuse looks to rebound from its worst season since 1975 in terms of win percentage, its search for a true starter will carry over into next season. And Gavin and Thompson, the ACC’s worst goalie tandem this season, will both return.

“We weren’t sure at the beginning of the year, and they’re pretty complementary to each other — they’re similar in how they play,” Gait said after the game. “We’re going to have them compete, and we got another freshman coming and (we’re) going to keep playing and put the best goalie in next year.”

The post Goalie struggles contributed to SU’s worst season since 1975 appeared first on The Daily Orange.