SOUTH BEND, Ind. — After an unsuccessful Syracuse clear, Tessa Queri attempted to pass to Sam Swart, but UVA midfielder Mackenzie Hoeg pounced on the ball. With most of SU’s defenders and midfielders surrounding the ball, Hoeg found a wide-open Morgan Schwab in the Orange’s zone.

As Schwab entered the 8-meter, goalie Kimber Hower kept her stick parallel to her body and moved further out of the crease. Schwab cut to the right and Hower mirrored her motion, but the cage was left open and Schwab scored easily on a hard, low-angle shot.

Schwab’s goal was one of 18 that Hower and fellow goalie Delaney Sweitzer conceded in Syracuse’s (13-5, 6-2 Atlantic Coast) upset loss to Virginia (9-9, 3-5 ACC) in the ACC Tournament quarterfinals. Hower and Sweitzer’s shortcomings have started to become a trend as the Orange’s save percentage has declined over the past five games. The overall percentage has plummeted to .335, which ranks 110th out of 117 Division I schools.

In recent years, former goalie Asa Goldstock provided consistent play for SU, finishing her career with the most saves in program history. While the Orange’s defense adjusted after losing three starters, the two goalies have struggled to fill the loss of Goldstock.

In the season’s first five games, head coach Kayla Treanor said the team would rely on a two-goalie system with Sweitzer and Hower splitting game time.

“(Hower and Sweitzer) do a lot of work on their own outside of practice,” Treanor said. “So right now we’re giving them both the opportunity to play and play free.”

In those five games, Sweitzer struggled more than Hower, and her struggles became more pronounced when she conceded four straight goals near the end of the game against then-No. 6 Northwestern, SU’s first loss of the season. While Hower gave up the same number of goals as Sweitzer, Treanot kept her in for overtime instead of Sweitzer. Treanor said postgame that the goalies needed to “clean” up the play. 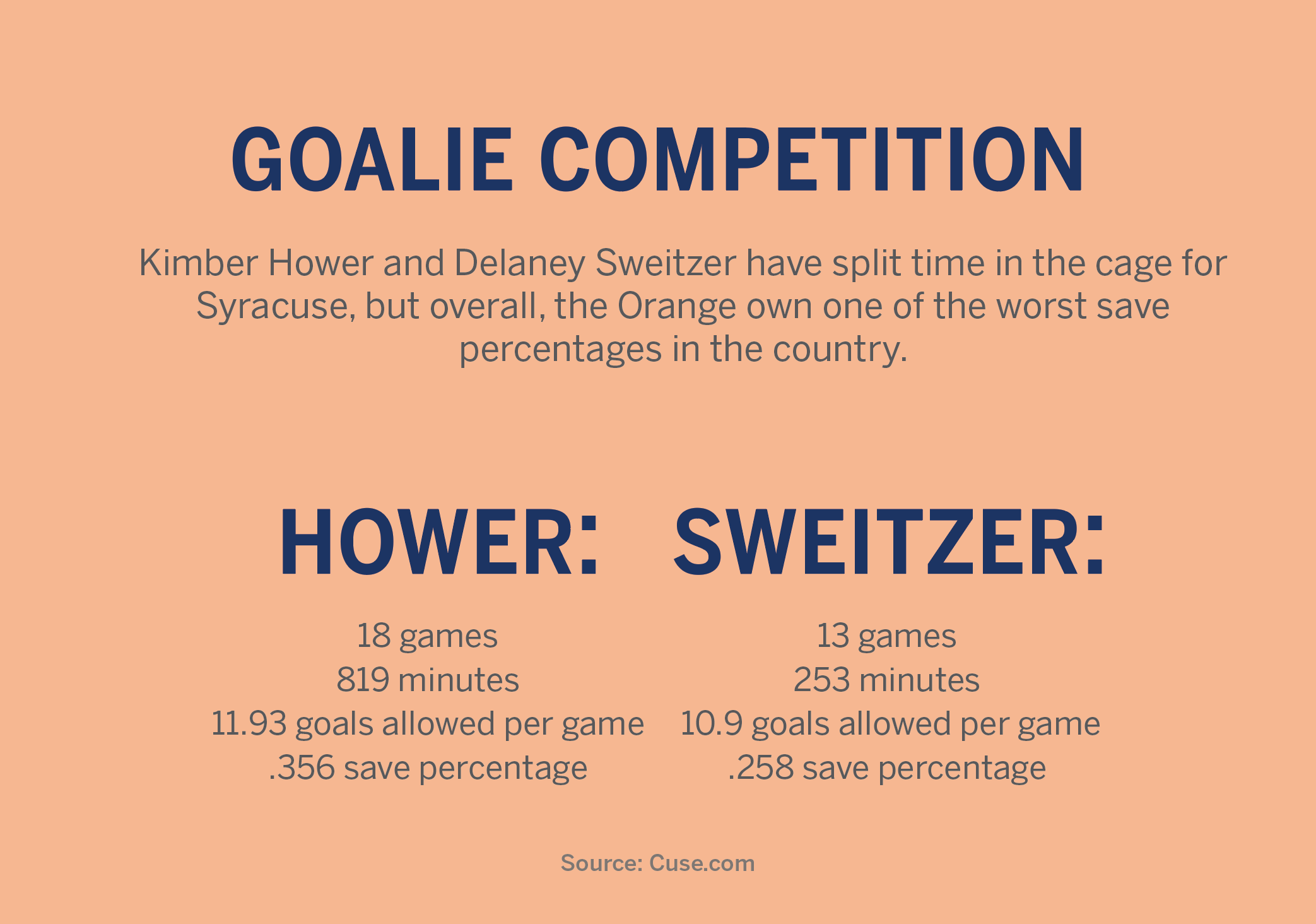 Since the Northwestern defeat, Sweitzer has only come in when Hower has struggled. When Sweitzer has played, though, she has recorded the worst save percentage in the conference.

In the second quarter of the ACC Tournament against the Cavaliers, Sweitzer came in after Hower allowed nine goals in a quarter-and-a-half. At first, Sweitzer kept Virginia scoreless for the remainder of the first half, but the Cavaliers didn’t take a lot of shots since the Orange controlled most of the possession. So when UVA actually had the ball, it took advantage of the USC transfer.

In the third quarter, Hoeg got the ball on a give-and-go pass from Rachel Clark and had open space inside the 8-meter. Hoeg sent a shot to Sweitzer’s stick-side and found the back of the net. The rest of the Cavaliers’ goals came past Sweitzer’s stick-side, too, and as the Virgina scoring run continued, the Orange went back to Hower, who allowed five more goals and recorded zero saves for the rest of the game.

In Hower’s first start against then-No. 6 Duke, she made a clutch stop in the final seconds to preserve the Orange’s 18-16 win over the Blue Devils. Treanor praised Hower postgame, still noting SU’s switch to man-to-man defense as a benefit for the goalie.

“(SU defensive coordinator Caitlin Defliese) made that change, and we were able to get a lot of stops,” Treanor said. “I think (man-to-man) helps Hower see the ball a little bit better and make more saves.”

Treanor said earlier this season that the Orange change their defense depending on their opponent. SU went with a man-to-man formation against No. 3 Boston College to limit Charlotte North, but against Virginia, Syracuse played in a zone, which hurt Hower.

After SU replaced Sweitzer with Hower in the third quarter, the Cavaliers continued on their scoring run, notching two more goals on free-position shots from Ashlyn McGovern.

At the start of the fourth quarter, Schwab again took advantage of Hower’s aggressive nature in the crease. Schwab collected a pass from McGovern, and Hallie Simkins’ pressure forced Schwab to readjust. But Hower had also come to the top of the crease, leaving the net open. Schwab only had to lift her stick above Hower’s shoulder to shoot and score for yet another UVA goal.

The post Goalie struggles against No. 16 Virginia highlight weakness for No. 3 Syracuse appeared first on The Daily Orange.