COLLEGE PARK, Md. — Down 1-0 three minutes into the first quarter, Syracuse finally had its first possession of the game after a save by Drake Porter that was followed by a clear. A team that usually takes 31 seconds for its first look hesitated this time, taking 46 seconds to navigate Georgetown’s defense and find an open shooting lane.

The shot by Tucker Dordevic missed, and Stephen Rehfuss hit the post on the ensuing attempt. Another shot by Dordevic followed, this one saved by Owen McElroy, the Division I save percentage leader.

Friday night, the Hoyas (13-2, 9-1 Big East) reminded Syracuse (7-6, 2-4 Atlantic Coast) why they have the top scoring defense in the country in their 18-8 win over the Orange. Syracuse didn’t score a goal until nearly 10 minutes into the first quarter and was held to four first-half goals. The eight total goals for the Orange were paired with nine caused turnovers for Georgetown and 10 saves for McElroy.

“(Syracuse) kept us up all night as a coaching staff with what they do on the offensive end,” Georgetown head coach Kevin Warne said. “But at the end of the day, our guys are ready to play.”

Syracuse was ranked No. 1 as the only undefeated team in the country when the 2020 season was canceled. But nine All-Americans were returning, and the Orange managed to snag the No. 2 recruit in the country, too. Syracuse was voted the conference favorite by ACC coaches. This would be the year that the eight-year streak without a final four appearance, the longest in program history by four years, would end.

Then the Orange surpassed their loss total from the year prior 60 minutes into the 2021 season. Their 2-4 regular-season conference record was their worst since joining the ACC, and their 7-5 overall record was nothing to write home about. Chase Scanlan, the biggest acquisition of 2020, didn’t play in the final three games of the regular season and was suspended for the NCAA Tournament.

After all that, Syracuse’s first-round opponent was Georgetown, the only team in the country to hold opponents to less than eight goals this year on average. McElroy leads the nation in save percentage and made 32 saves in two games in the Big East Tournament last week as well.

For a moment, though, Syracuse looked like it could overcome its regular season struggles. A defense that allows nearly 14 goals per game held the Hoyas to just three in the first quarter. The Orange succeeded at putting pressure on McElroy and Georgetown with nine first-quarter shots.

“We had some decent shots in the first quarter, first half, and I thought (McElroy) made some good saves,” Syracuse head coach John Desko said.

Then, Georgetown started the second quarter with five unanswered goals. Syracuse didn’t have possession for three minutes but found itself in Hoyas’ territory on a man-up after a holding call on a Georgetown defender.

The Orange passed the ball around X looking for a clear shot. Even up a man, Syracuse struggled to navigate the opposing defense. As the penalty clock ran down, Dordevic fired a shot blocked by a defender. Owen Hiltz picked up the ball and passed again to Dordevic through the small passing lane he could find. Dordevic couldn’t control the pass, though, and Georgetown took the ball right back when the man-up ended.

Minutes later, Rehfuss finally found a flaw in Georgetown’s defense. He dodged his short-stick defender to run around from X and beat the slide to the goal. Rehfuss sank the ball past an unexpecting McElroy to make it 8-3.

For the most part, Syracuse’s offensive luck would end there. Syracuse defender Brett Kennedy caught the Hoyas unprepared in transition, scoring his second goal of the season on a cross-body shot with 14 seconds left in the half.

Georgetown responded by holding Syracuse scoreless for the third quarter — the third frame without a goal this season for the Orange. In nine possessions, the Orange had the same number of turnovers as shots (six), and only three of them landed on target. In one instance, Grant Murphy picked up a ground ball and started to clear, but Joe LiCalzi knocked it out of his stick, and Georgetown’s possession continued.

“We had 13 turnovers today, and you can’t give a team like Georgetown that many more opportunities,” Desko said. 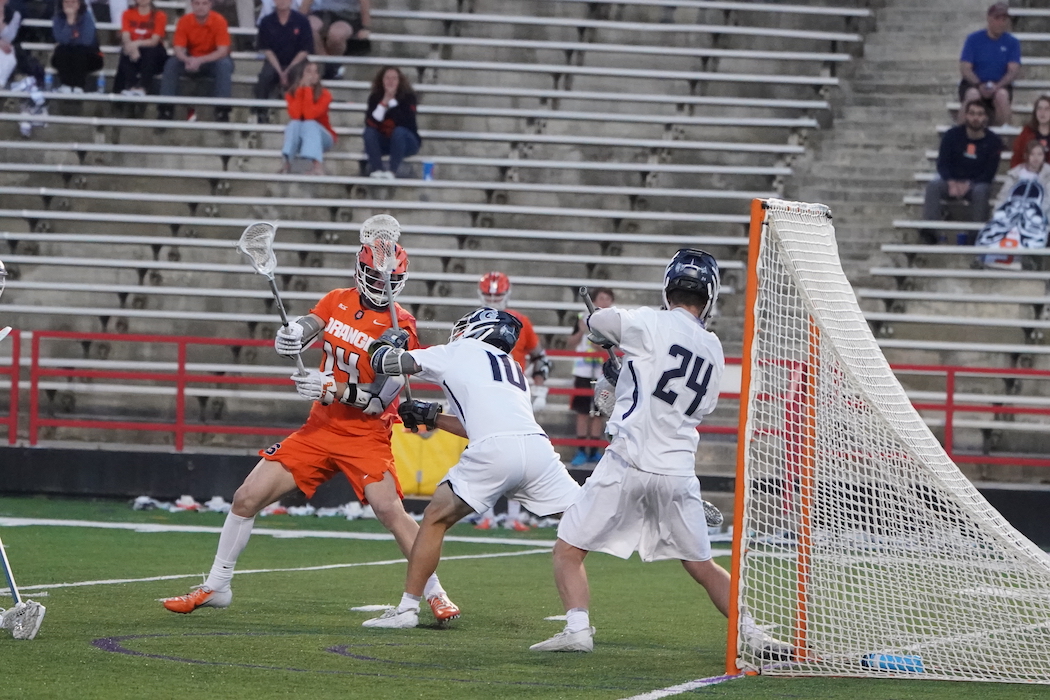 In nine possessions, the Orange had the same number of turnovers as shots (six), and only three of them landed on target. Courtesy of Tyler Cady | SU Athletics

Then in the fourth quarter, Syracuse attempted to mount a comeback. Jamie Trimboli scored off the first faceoff and then again off the second. Georgetown got a shot off, but Seebold scored again after the clear, and a 13-4 lead for Georgetown turned into 13-7. The Hoyas called timeout, and it was starting to seem like, even if just for a second, there was a crack in the defense for Syracuse to exploit.

But soon enough, Georgetown was back to its old self, holding the Orange to just one more goal in the final 12 minutes of the quarter. In a last-ditch effort, Syracuse totaled five and a half minutes of penalties in seven minutes. The Hoyas also had a full minute of six-on-three. Desko attributed those penalties to a tough ride from the attacks trying to limit Georgetown’s possessions in any way possible.

It was a fitting end for a Syracuse team that’s been inconsistent all season. Its 13 goals per game say very little about a team that’s scored at least 18 goals the same number of times it’s scored single digits. Faceoffs were a common scapegoat, with Desko saying that the offense would score more if they had more possessions. But even when they tied the faceoff battle with the Hoyas, they found no answers on offense.

Syracuse had a player score at least five points in six of its seven wins. Against Georgetown, no player stood up to lead the offense, leaving the six men on the field looking lost in what was, for several of them, their final game at Syracuse.

Desko started putting in his reserves, and Declan McDermott stood alone at midfield with the ball before the Hoyas swarmed to celebrate their NCAA Tournament win, while the Orange, for the third straight tournament, hung their heads and slowly walked off the field after a first-round exit.

“I just expected a little bit more from the game tonight,” Desko said.