While this was a “weird space” in American music culture, according to Theo Cateforis, an associate Professor of Music History and Cultures at Syracuse University, pop songs were still relevant. And one artist, Carlos Santana, made a hit that transcended generations. With an iconic initial guitar riff and Rob Thomas on vocals, Santana made “Smooth” — the final number-one hit of the millenium.

“All the hard masculinity that had built up through gangster rap, metal and alternative just kind of reached this culminating point,” Cateforis said. “But the ‘90s was also a time where classic rock formatting really exploded as well. A song which is kind of cross generational is ‘Smooth.’”

Twenty-one years later, Syracuse’s football team officially begins most practices with this hit. Head coach Dino Babers has been one of the only football coaches at SU to play music during practices, and he always follows the same routine. Practices start with “Smooth” or occasionally other songs like “Empire State of Mind” by Jay-Z and end with “I Got You (I Feel Good)” by James Brown. The music played during the rest of practice, or pregame warmups, is up to the players.

“The players get to pick (the in between),” Babers said. “But the first song and the last song is a bridge between old school to new school.”

Cateforis refers to songs like “Smooth” and “I Feel Good” as a standard — these tracks have travelled from generation to generation, staying relevant in the public sphere through different types of pop culture. 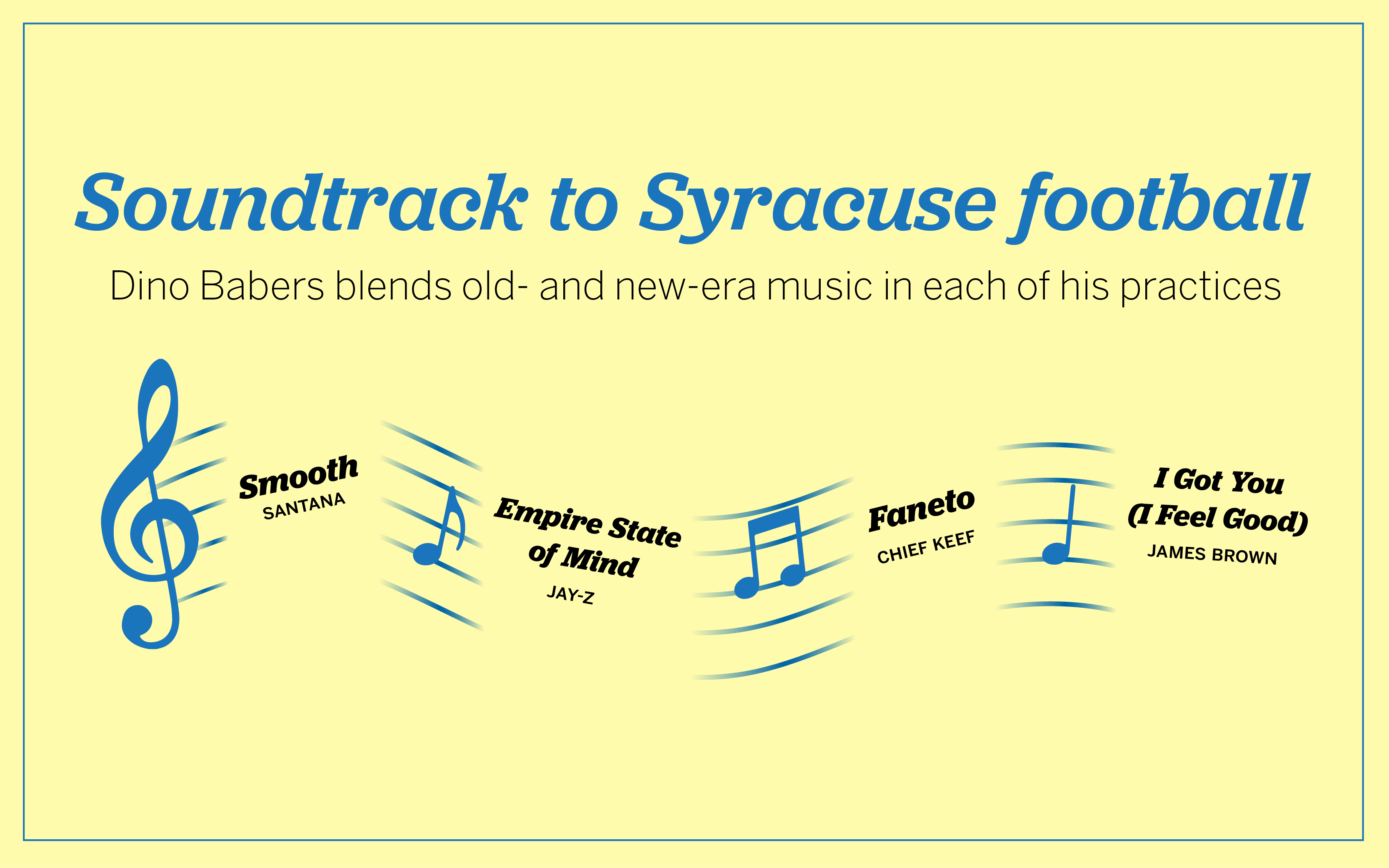 Defensive lineman Josh Black, who has only had Babers as head coach at SU, said it’s strange when he hears these songs when he’s not on the field.

“When I hear those songs outside of practice it gives me weird chills or vibes,” Black said. “When you hear these songs it’s go-time. Yeah you can have your fun before practice, but when those songs come on it’s serious.”

While Babers’ players recognize Santana’s first guitar strum as the beginning of business, he said the lyrics on its own have a deeper meaning.

“You got the kind of lovin’ that can be so smooth, yeah, Give me your heart, make it real, or else forget about it,” Thomas sings.

The guitar riffs from Santana reminds them to get their bodies moving. But the second line is even more interesting, as it suggests if someone doesn’t put their full effort into anything, there’s no point at all.

Cateforis said lyrics like the second one in this stanza are normal in all genres of music, referencing a pursuit to be the best. The intertwine between sports and music is unmistakable due to lyrics like this, as both fields are obsessed with competition and “being number one,” he said.

“(Music and sports) are both rhythmically based like in motion,” Cateforis said. “High energy sports fit really well with music because you can move your body to the music.” 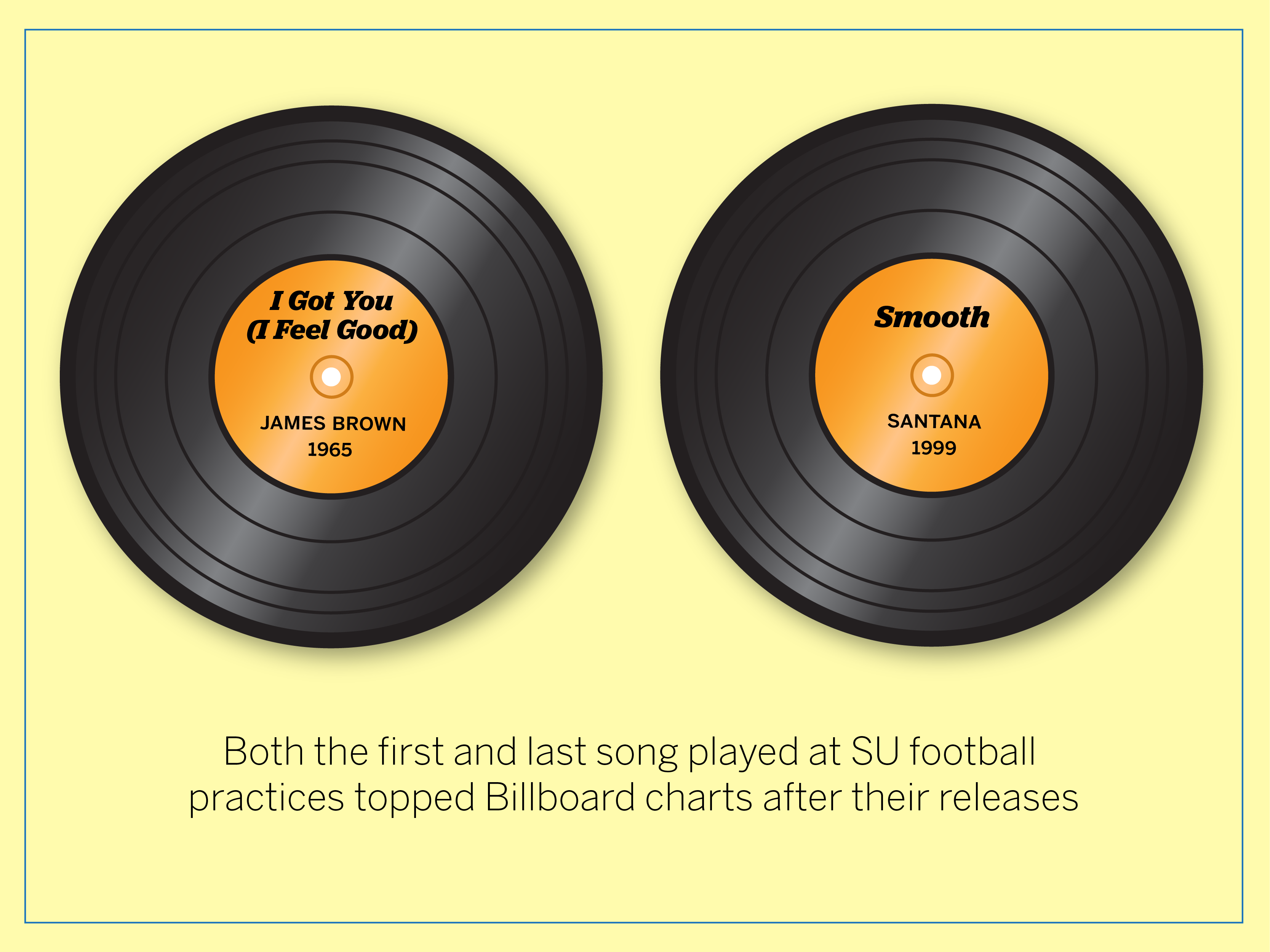 High-energy hip-hop and rap songs also have a lot of references to athletes or athletics, Cateforis said. The middle portion of Syracuse’s practices, which is led by player suggestions, contains mostly rap songs since players prefer those to the older tracks that Babers likes.

Before games in the Carrier Dome, rap songs fill the stadium as players go through their pregame routines. Black said rap songs, like “Faneto” by Chief Keef, help with the physical mindset required for positions like the defensive line.

“It’s something to get people pumped up. It gets your blood boiling and ready to hit someone,” Black said.

Prior to Syracuse’s matchup against Rutgers, “Faneto” rang through the Dome, all SU players dancing to each “gang, gang” line by Chief Keef. The Scarlet Knights’ players even joined in on their side of the field, bouncing up and down in unison with their opposition.

Still, songs suggested by the players or coaches are not the only ones that play throughout the stadium before or throughout games. Cateforis said that stadium hits like “All Star” by Smash Mouth have stayed relevant by getting fans up on their feet during games.

But before the Orange head into the locker room and someone else takes over the playlist in the Carrier Dome, “I Got You (I Feel Good)” is queued. Cateforis said this pick doesn’t surprise him, as Brown emerged at a similar period as Santana. But Brown’s impact on music wasn’t just based on his soul harmonies, it was on a cultural level, too.

Soul was the first genre recognized as “Black music,” Cateforis said. “I Got You (I Feel Good)” was one of the breakout tracks, with a connection to the civil rights movement that started near the release of the piece. Babers — the only Black head coach currently in the Atlantic Coast Conference and the first to lead SU — said he realizes his importance at the forefront of a team of majority Black players.

“There’s just certain songs that young people need to know the words to,” Babers said. “Although the first song has changed over the years, the last song has never changed.”

With trumpets, alto saxophones, drums, trombones and Brown’s notorious vocal inflections, Babers gets his final instructions out to players in between the white lines. The team heads to the tunnel and returns to the field with “Crazy Train” by Ozzy Osbourne playing.

“Those songs, he’s hoping to establish a routine for the team so they come to expect it,” Cateforis said. “Football, like other sports, is based a lot on rituals, habits and traditions that go along with teams. It’s a form of team building.”

The post From ‘Smooth’ to ‘I Feel Good,’ music influences SU football’s daily routines appeared first on The Daily Orange.