Against Liberty with under four minutes left, defensive end Cody Roscoe forced Flames quarterback Malik Willis to step up in the pocket. With the offensive lineman distracted by a linebacker blitz, Roscoe found space, hit Willis from behind and slapped the quarterback’s throwing arm to jar the ball loose.

Roscoe’s strip sack led to a game-winning field goal and SU’s third win of the year, but his process was the same as always: beat the offensive lineman and get to the quarterback.

“On every snap, I’m gonna attack and go at you,” Roscoe said. “And I can feel like I can win against a guy. It’s not necessarily finesse or speed, it’s just a constant motor every snap.”

Roscoe’s sack against Liberty was just one of his Atlantic Coast Conference-leading eight this season. On Oct. 19, Roscoe was named an AP midseason All-American. But two years ago, before transferring to SU, Roscoe was playing in the Football Championship Series at McNeese State University in Louisiana. Out of high school, he was a lightly-recruited, undersized defensive end — and an oversized linebacker — with no Football Bowl Subdivision offers. Roscoe grew from the No. 2,851-ranked recruit in his class into one of the nation’s top defensive ends.

“I don’t think many guys saw him playing at Syracuse and being as productive as he is now,” said Carlos Perez, Roscoe’s defensive ends coach at McNeese State.

When Perez first saw Roscoe at a high school showcase at Texas Southern University, his size didn’t “stick out,” he said. At 5-foot-11 and 236 pounds, Roscoe was built like a linebacker, but not quick enough to be a good one, McNeese State assistant Lark Hebert said. He lacked the arm length of most defensive ends, but his strength, motor and ability to “get off” at the line of scrimmage stood out, Perez said.

When Perez first saw Roscoe after his sophomore year at Heights (Texas) High School, head coach Stephen Dixon had recently moved him from middle linebacker to defensive end. Dixon, a former defensive lineman, said he noticed whenever he sent Roscoe on linebacker blitzes, he showed a quick get off and had “natural instincts” as a pass rusher. Dixon said he felt Roscoe’s best chance at playing in college was as a defensive end.

“I was really, crazy upset,” Roscoe said. “When he switched me off (from linebacker to defensive end), I said ‘No way.’ I felt like I thought he was messing up my future. I wasn’t gonna be able to go to college. I thought nobody was gonna pick me up.”

But Dixon showed Roscoe his favorite moves, including a side-to-side “jab step move” which misdirected offensive linemen using a swim, rip or dip move to get space. Roscoe worked daily on his takeoff while focusing on where to look while attacking offensive lineman. He also took note of how deep quarterbacks dropped back, all because he “had to get to the quarterback.” 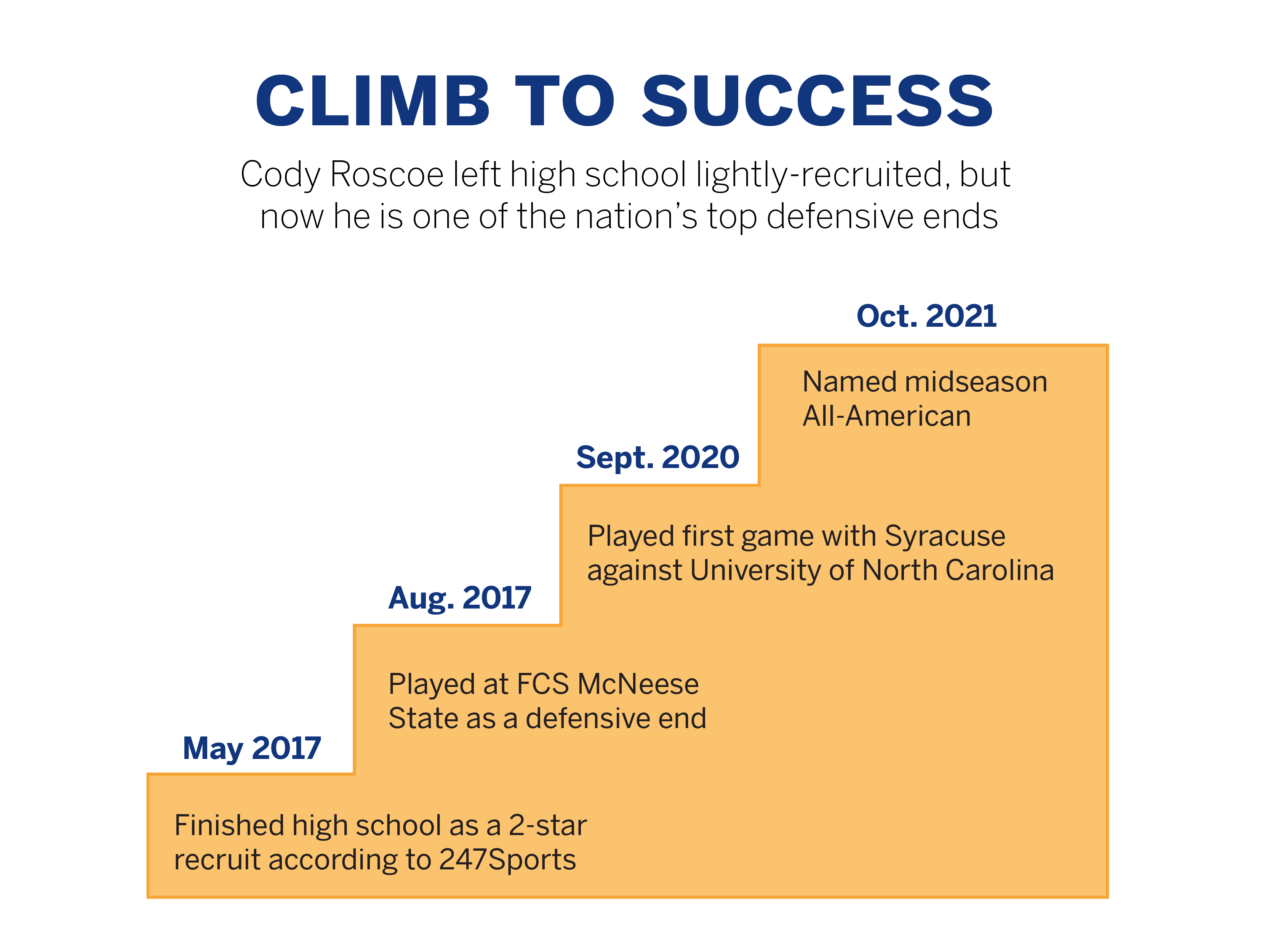 “Cody would come off the ball and the offensive lineman wouldn’t know whether he was going inside or outside and man,” Dixon said. “Before you know it he’s in the back of your freaking head.”

In his first season playing defensive end, Roscoe recorded 10 sacks in 10 games and earned first-team All-District honors. Then as a senior, Roscoe had 22 sacks — one of highest numbers in the state of Texas — and he was named first-team All-State. But the big colleges didn’t come. They saw Roscoe as not being tall enough or fast enough, Dixon said, and he wasn’t the “prototypical” defensive lineman.

Roscoe landed at McNeese State, and before his first game against Stephen F. Austin State University, Roscoe endured “the worst week of practice” in his career as McNeese State coaches helped him adjust to an elevated level of play. Roscoe responded with a strip sack, an interception and five tackles.

“To this day, I feel like that was the best game I’ve ever had in my life,” Roscoe said. “I don’t feel like I can ever match that type of statline since I played that game.”

Perez said Roscoe was on the field before practices and in between classes working on technique. Perez and Roscoe looked at recent games to “break down every inch,” Perez said. Then-McNeese State head coach Lance Guidry said Roscoe studied offensive linemen from opposing teams to see if they were late getting out of their stance to exploit them in the upcoming games.

Roscoe also worked with Perez on extending his arms to gain separation against offensive lineman, Hebert said. He was constantly looking for more pass rush moves, Herbert said, and one included a “long arm” move where Roscoe would jab the offensive lineman with his arm to create separation for himself.

Guidry said Roscoe worked closely with fellow defensive end Chris Livings. The two lineman stayed on the field to work on different ways of using their hands while rushing, how they could get offensive lineman’s hands off of them and how they could get through to the quarterback once the O-lineman “opened up the gate.”

“If you were working with them and you didn’t work, I mean you stood out like a sore thumb because (Roscoe and Livings) just got after it,” Hebert said.

At first, Roscoe focused on getting to the quarterback for a sack, but McNeese State coaches told him they needed him to stop the run, too. Hebert worked with Roscoe on zone-read plays, where the quarterback either keeps the ball or hands it off to the running back based on what the defensive end does. Hebert and Roscoe would do an “eyes drill” so Roscoe could locate the ball. The two did the drill so many times that Roscoe was rarely confused by fakes, Hebert said.

After the 2019 season, Roscoe transferred to Syracuse. Roscoe, in addition to adjusting to ACC competition after playing for three years in the FCS, had to adjust to SU’s 3-3-5 defense as he said that he had played in 4-2-5 schemes throughout his career. SU’s defense has a lot more stunts and crosses as opposed to playing in mostly one-on-one situations like he had in high school and at McNeese State, Roscoe said.

When he played in a 4-2-5 in high school, Roscoe said he always stood up instead of starting in a three-point stance because it was more comfortable — it allowed him to see the whole field, along with the offense’s formations and shifts. But at Syracuse, Roscoe has rushed out of three- and four-point stances. Now in his second year, he said he’s learned the system. 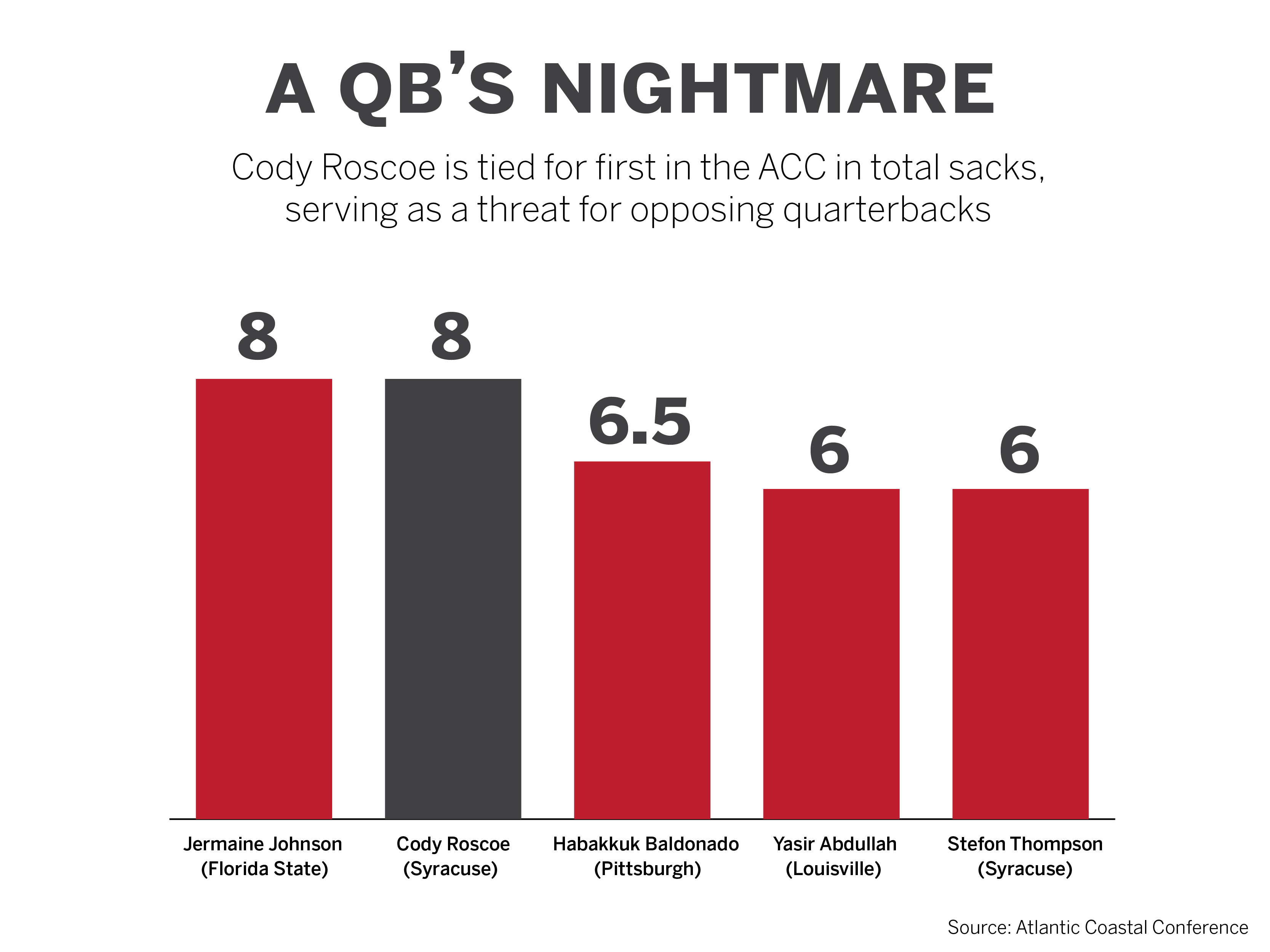 Roscoe also matched his body to the new defense, he said. Last year he thought he had to be “really heavy” to play in the 3-3-5 defense, and was around 268 pounds — the heaviest he had ever been in his life, he said.

“After the season I just told myself I didn’t wanna be at that point ever again,” Roscoe said. “I wanted to get back down to a comfortable weight that I feel like I can fly around and just be chaotic when I’m on the field.”

Now, Roscoe said he is about 10 pounds lighter, and he’s changed his eating habits and focused more on flexibility. He worked with his trainer at home on single leg exercises so he could change directions quickly and become more explosive.

The results have shown for Roscoe through nine games. Last year, he had just two sacks and 20 tackles in 11 games. This year, he already has 39 tackles and eight sacks. On Saturday against Boston College, he had one of his strongest games of the season, recording five tackles and splitting a sack with Kingsley Jonathan.

When his mom told him that he was named a midseason All-American two weeks ago, Roscoe responded with, “What are you talking about?” The player who barely cracked the top-3,000 players in his class four years ago didn’t know the midseason honor existed. But now, it’s just another step on his road to proving he can be “as good as anybody in the country.”

The post From 2-star to ACC sack leader: Cody Roscoe’s growth at defensive end appeared first on The Daily Orange.