As Sean Tucker crossed the goalline for his first collegiate touchdown, looked across the goalline, bowed his head and stood up in his running stance as he plunged in for the score.

His high school track coach Dan Harper had seen the move before.

Tucker had just been nearly tackled by a Georgia Tech defender at the 26-yard line for a modest gain. But the Orange’s freshman running back used the defender on the ground to roll over him without his knee touching. After breaking away, he outran two more defenders and glided into the end zone.

In September, Tucker was the third string running back. He was fifth on the depth chart before two of the Orange’s projected starters opted out in the summer. His meteoric rise up the depth chart, where he became Syracuse’s go-to back, mirrors his transition from defensive back to running back in high school. After an injury, Tucker won the starting job as a high school sophomore.

Even though Syracuse (1-8, 1-7 Atlantic Coast) is near the bottom of the ACC in offensive line yards, Tucker has found success on the ground with 5.2 yards per carry. Syracuse’s offense is having its worst season in five years under Dino Babers, but Tucker has been an encouraging sign that SU has found its running back of the future.

“I feel like he’s definitely come a long way,” offensive lineman Chris Elmore said. “Freshmen usually get in here, and some of them usually freak out under pressure. But seeing Sean come in, he’s just been a poised player.”

Tucker took over the starting job in the third game of his sophomore year at Calvert Hall (Maryland) High School. The starter, a senior, sprained his ankle during the game, then-Calvert Hall coach Donald Davis said. The team turned to Tucker, who broke off an 89-yard run and had nearly 150 total yards on the ground. It was the last game Tucker would play running back for Calvert Hall — they moved him to linebacker. Tucker started every game for the rest of his career in his new role.

At Syracuse, Tucker’s first chance to prove himself came in training camp, after running backs Abdul Adams and Jarveon Howard opted out. Tucker texted Davis that he was going to get an opportunity early and that he’d be traveling for the first game against North Carolina.

In game two at Pittsburgh, Tucker caught a screen pass and had multiple carries. But an injury to Jawhar Jordan gave Tucker a chance to get the majority of the touches out of the backfield.

“He did the same thing with us,” Davis said. “He was the backup running back, and he came in, and the moment wasn’t too big for him.”

Tucker’s explosiveness and low center of gravity both help him as a runner, former Calvert positional coach Dom Warren said. During one high school game, the sole of Tucker’s shoe exploded and ripped apart on a run play, and he didn’t have a spare pair of cleats on the sideline.

Rather than miss playing time with the footwear issues, the training staff taped his cleat and Tucker finished the game.

“If your pad level is low, you can break tackles,” Warren said. “All of that allows your speed to become power. His strong leg drive makes him really hard to tackle.” 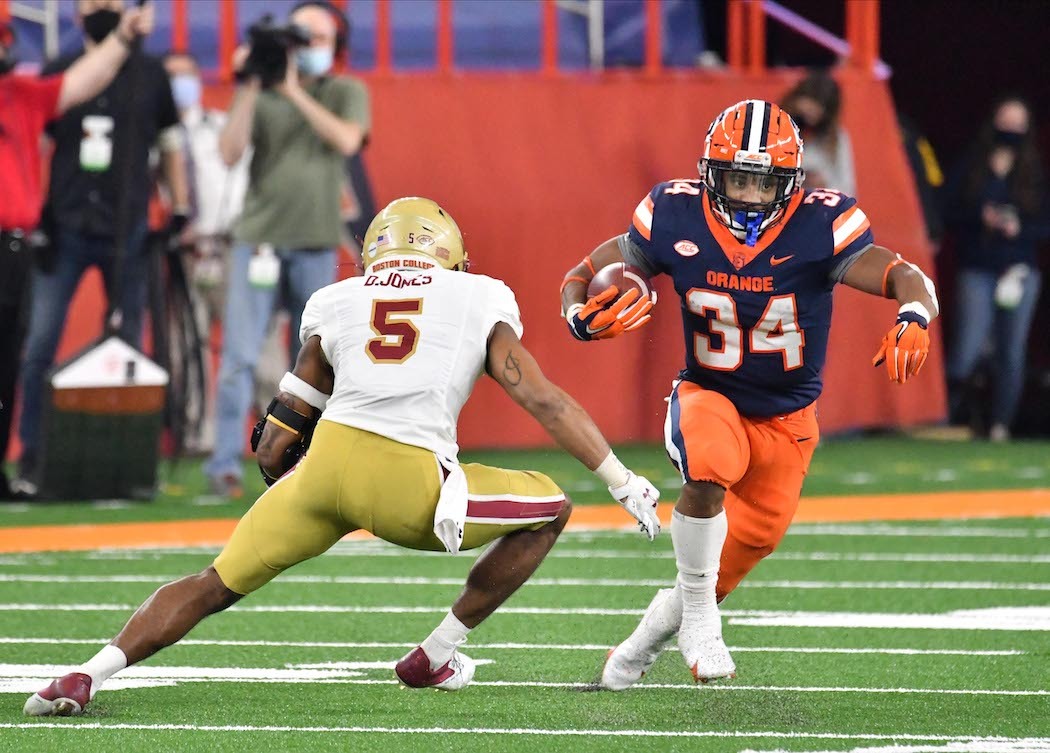 When Tucker wasn’t playing football for Calvert, he ran track. Summer, winter and spring track surrounded fall football season, where Tucker worked on speed and agility. Tucker ran the 100, 200, 4×100, 4×200 and 300 in his final year of indoor track before COVID-19 shut down the season.

The time spent on the track developed Tucker’s straight-line speed, and Harper incorporated lateral agility work into their training program to help Tucker improve with the quickness needed to be an effective running back.

In the spring of his senior year, Harper needed Tucker to run the 300-meter dash during the indoor season. He went up to Tucker, put his left hand around his left shoulder and asked him how he’s feeling.

Harper needed the fastest athlete in the school to run one more time.

Tucker doesn’t run track any more. But as a tribute to his track days, Tucker has made bowing his head and looking across the finish line a staple of his touchdown celebration, exactly as he did against Georgia Tech.

“If you’re big, you have to break the tackle. If you’re a smaller guy, you have to be able to take it to the house and make a guy miss,” Babers said after Tucker’s breakout performance against Georgia Tech. “Whatever your style is, you need to get more than what the play is blocked. That’s what Sean Tucker did tonight.”

On his first touchdown run, he broke three tackles from GT defenders.

Babers said the most important stat he looks at for his running backs is yards per contact, and Tucker has shown an ability to make the first man miss the entire season.

He’s also logged 578 total yards — a team-high for rushers or receivers. For an anemic offense that has scored more than 21 offensive points one time all season, Babers has found a reliable running back in Tucker.

Against Louisville, when Syracuse had one of its worst-ever offensive showings under Babers, Tucker still managed 5.8 yards per carry and accounted for 93 of the Orange’s 137 total yards. Babers has added an “asterisk” around one of the worst seasons in program history due to COVID-19 and injuries. Tucker’s emergence, however, doesn’t need one.

“He’s a young man who keeps impressing us in a very difficult situation,” Babers said. “He’s going to continue to get better, and we can’t wait to see him in a few years.”