At the start of the 2020 United Soccer League season, Nico Perea sat in his Miami home, not out on the field. His contract with the Indy Eleven had expired and he didn’t re-sign for the 2020 season.

Then the pandemic hit, and Perea, without a professional club to train for, shifted his training focus towards improving himself as an athlete. He began making early morning drives to David T. Kennedy Park’s beach volleyball court, where he’d meet up with three to four players as well as then-U.S. Beach Soccer National team assistant coach, Francis Farberoff.

Farberoff had previously trained him occasionally during the offseason, ever since they met through one of Perea’s high school teammates in 2018. At that point, Perea was focused on how the beach training would translate to his game at the professional level. But in 2020, after a six year professional soccer career, Perea transitioned into playing at the highest level of beach soccer. The former Syracuse captain landed himself a spot on the U.S. Beach Soccer National team, which competed in the 2021 FIFA Beach Soccer World Cup in August.

The beach was one of the first places where Perea became acquainted with soccer. He grew up in Hollywood, Florida and lived near Hollywood Beach, where his father, Sergio, would run along the sand and kick a ball back and forth to him. Perea was five years old at the time, and the two made their beach kickarounds a daily ritual.

“We always did our training along the beach, so his (enjoyment) for beach soccer is nothing out of the ordinary,” Sergio said in Spanish.

Just 25 miles south of Hollywood at Kennedy Park, Perea once again used the beach to master his skills — this time as a professional soccer player with nearly 25 years of experience.

After training with Farberoff during the 2019 offseason, Perea was invited to the Beach Soccer National team training camp in February, held in Huntington Beach, California. It was Perea’s introduction to competitive beach soccer, and he was still learning how to play the game. 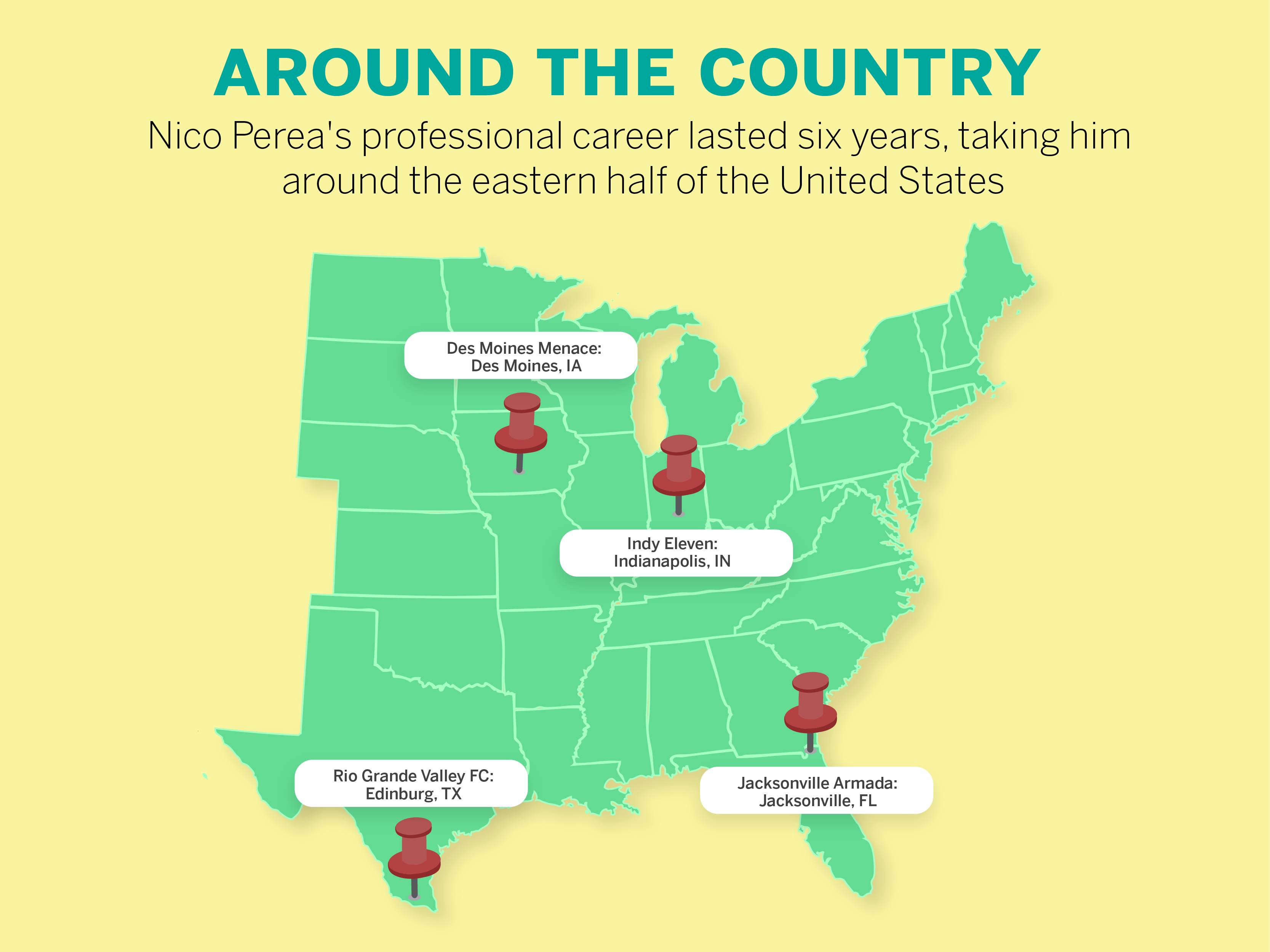 But Perea left camp, re-signed with the Indy Eleven and didn’t think about beach soccer for over a year. Farberoff still tracked his potential, Farberoff said, noting Perea’s speed and tactical understanding of soccer as his standout attributes.

“I saw potential in him because I believed he had all the tools,” Farberoff said. “The only thing about beach soccer is that it is very different and you need a lot of experience as well.”

After the USL season, Perea had been training on the beach at home without any professional contract for four months. It was the longest span of time he had spent with family since he moved around the country to pursue a professional career. Fulfilling that homesickness was the motivation Perea needed at the start of his professional beach soccer career, he said.

“The deciding factor was just being home,” Perea said. “Being home was just like ‘Hey, this is where you belong. You love the beach, you love soccer.’ What a combination. It was like some holy power saying ‘Look, this is what you’re meant to do.’”

When Farberoff took over as the team’s head coach, one his main goals was to assure his players were training consistently as a team. As the NBSL began to host small tournaments, players, including some from the National team, traveled to Florida from all over the country to participate. It became a showcase for top-tier players to perform in front of Farberoff.

Perea caught Farberoff’s eye yet again, possessing a quality almost no other player had — professionalism.

“Since he had been playing professionally for a few years in USL, he had a professional mentality,” Farberoff said. “That was something I thought we were lacking in our program.”

Farberoff invited Perea back to play and train locally after hinting at a potential national team roster spot for him. Perea’s local training group had grown to around 20 players, and Farberoff believed they were good enough to compete as a team. The group played several casual games against the Bahamas All-Star team, which helped turn the potential of a roster spot into reality for Perea. 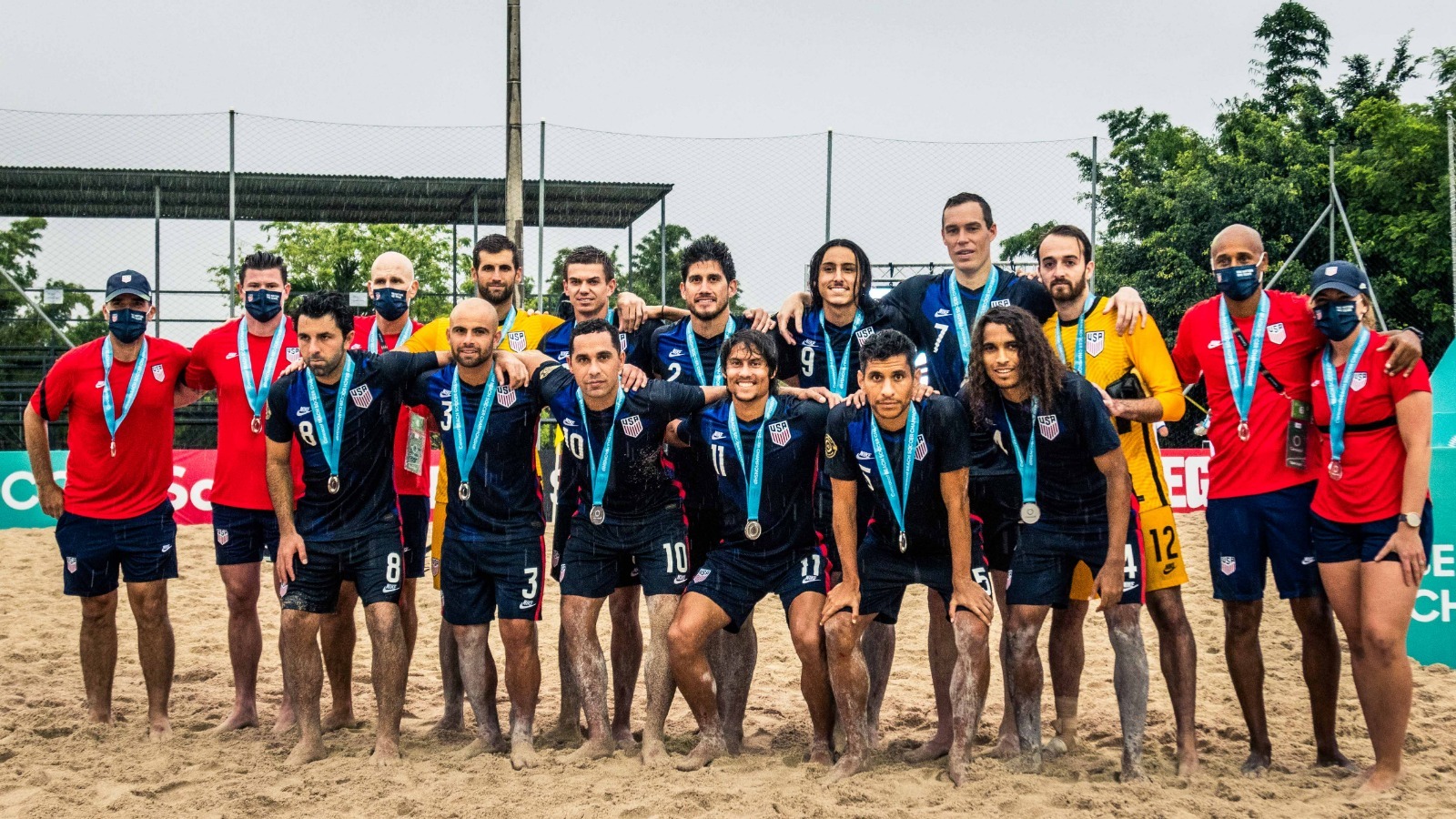 Perea’s performance against the Bahamas along with his rapid development and athleticism earned him a national team call-up for the CONCACAF Beach Soccer World Cup Qualifiers that May.

“He really did well in those games,” Farberoff said. “If he continues with his work ethic, his perseverance and everything that he has, he’s going to be really good.”

Perea was unusually nervous to make his official beach soccer debut, but he said his nerves reflected his excitement to play rather than any anxiety. But the jitters quickly faded as he scored four minutes into his debut against Turks and Caicos. He scored once more en route to an 11-1 onslaught in the first round of play.

The U.S. finished second in its group and advanced to the knockout stage against Panama. Perea scored his third goal of the tournament in the U.S. advance to the semifinals with a 4-3 win. In the semifinal round, the U.S. defeated Mexico to qualify for the Beach Soccer World Cup in Moscow, Russia. It was the U.S.’s third World Cup berth in the last decade after failing to qualify in 2011, 2015 and 2017.

Farberoff held a national team training camp in Fort Lauderdale to get a final look at Farberoff’s prospects ahead of the World Cup. The camp brought out a surprising feeling for Perea, he said, who, for the first time in his beach soccer career, hadn’t felt like he was behind the learning curve.

“At that point, I was already very confident in my ability and what I had been able to learn, and I was able to earn myself a spot on the roster,” Perea said.

Perea began the World Cup just as he did the qualifiers, scoring the game opener just two minutes in over the host nation, Russia. He scored again in the 32nd minute, sending the game into overtime. After a controversial foul on the U.S. goalie with 14 seconds left, Russia scored on the ensuing free kick, sealing a 5-4 victory.

The U.S. would go on to lose the next two games of the group stage, eliminating the team from the World Cup. The U.S. lost another 4-3 game against Japan, where it faced beach soccer legend Osmar “Ozu” Moreira, whom Perea watched highlights of when he was still learning the sport. 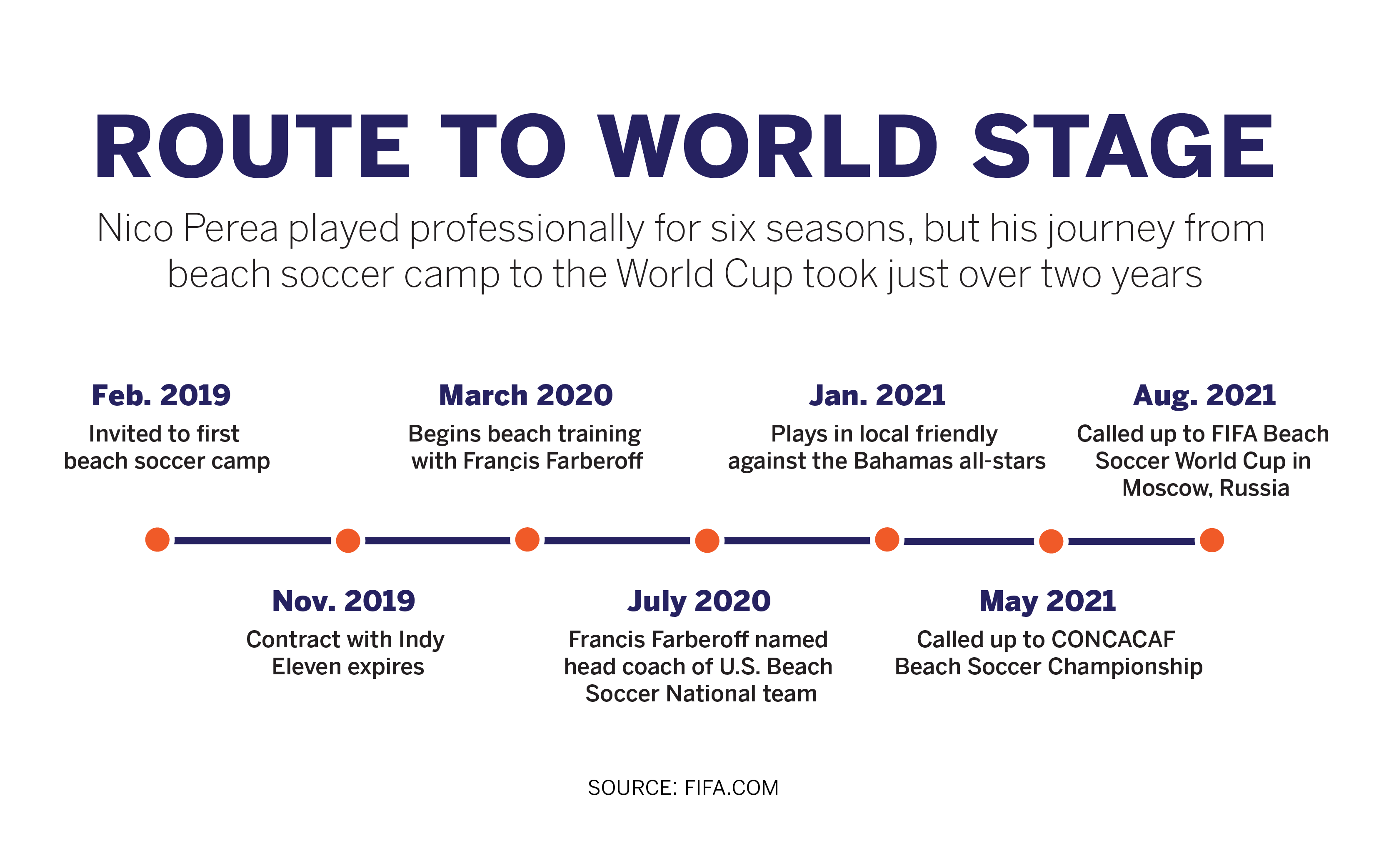 In its final game of the tournament, played against Paraguay, the U.S. fell 9-4. Perea assisted what he viewed as the team’s best goal of the tournament — a sequence where the team moved the ball across the court without it touching the sand.

Perea was one of the U.S.’s only three goalscorers in the World Cup, scoring four of the team’s 11 goals. Yet he wanted to accomplish more, he said. It took Sergio’s words of encouragement to help him realize his rapid rise to success within beach soccer.

“I told him that it was only his first beach soccer tournament and that it had gone really well,” Sergio said in Spanish. “It was time to start preparing for the next (World Cup) in two years. You have to keep going because that’s how soccer is.”

As a player on the national team, Perea was one of the key scorers on a team for the first time in his career. Throughout high school, college and his professional career, Perea played as a defensive midfielder, which gave him the role as the team’s “workhorse.”

It was a role that he embodied while at Syracuse, allowing him to stand out at Syracuse and earning him the captain armband during his senior year, Rookie of the Year honors in 2011 and 73 career starts over four seasons under Ian McIntyre. It was also enough to make him one of the four Syracuse players eligible for the 2015 MLS SuperDraft.

But Perea was the only member of that group who wasn’t drafted.

“When I didn’t get drafted, it didn’t really break me. I was not too upset,” Perea said. “It just didn’t happen. I was able to go to Jacksonville, play there for two years and had an amazing time. (I) met some amazing people.”

He said he recalls McIntyre telling him that he was always the engine of the Syracuse team, a quality that some teams drafting don’t notice right away.

Farberoff said he believed in him as a player and appreciated how much Perea believed in the vision he had for American beach soccer. Farberoff knew that, since Perea showed up to each training and performed well on a consistent basis, he could help the U.S. Beach Soccer program achieve its major goal: to become ranked among the world’s top 10 teams.

“It’s just the beginning,” Farberoff said. “I see him being one of our leaders for the future and building the new cycle, helping us take this program where it should be.”