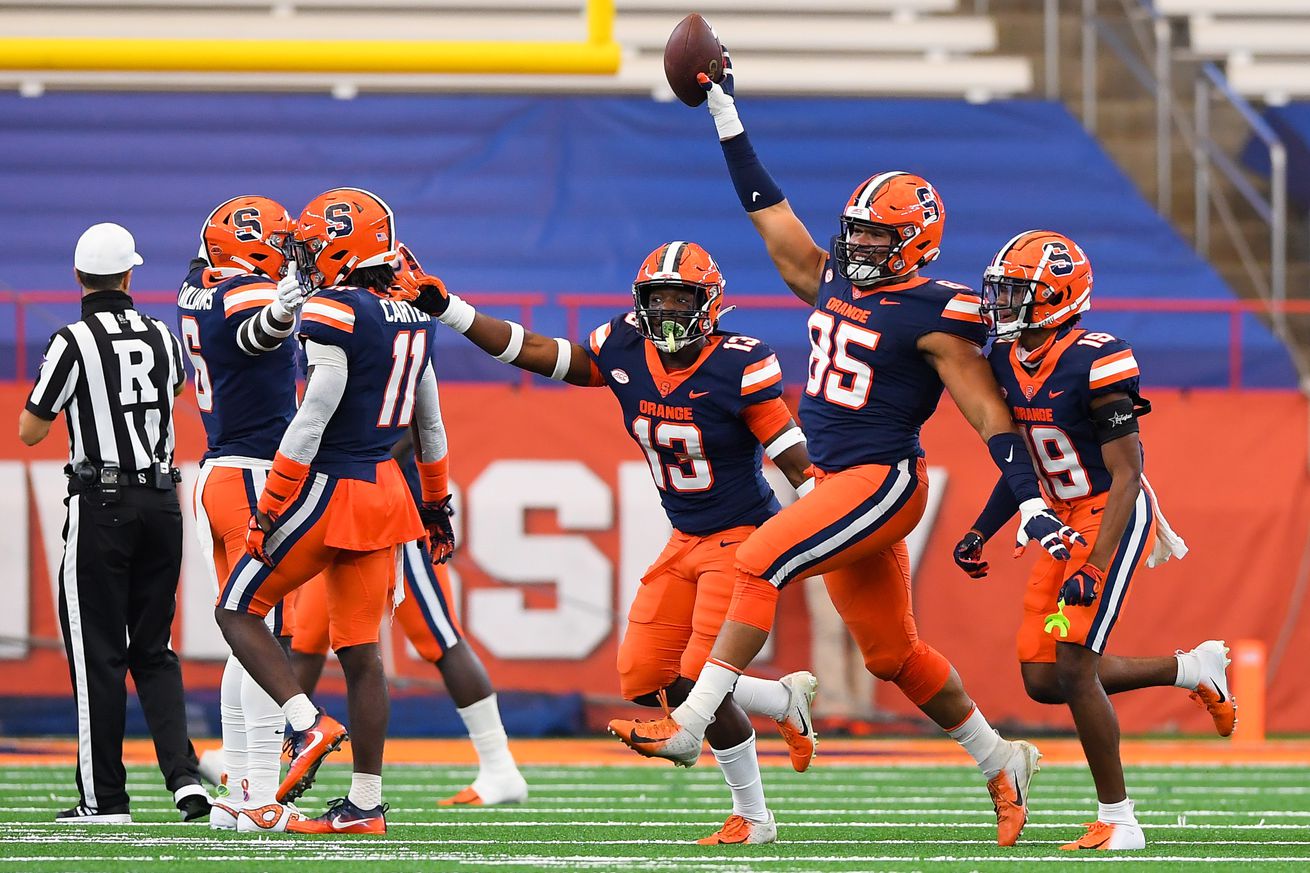 “I give those guys a lot of credit when they can get the ball like that,” said Dino Babers

Four interceptions and a fumble recovery propelled the Syracuse Orange to its first win of the 2020 season. SU also showed offensive improvements as both sides of the ball contributed to beat Georgia Tech 37-20.

Tony White’s 3-3-5 defense continued to excel in pass defense as Syracuse took advantage of turnover-prone rookie quarterback Jeff Sims. Josh Black, Trill Williams, Rob Hanna, and Ja’Had Carter all walked away with an interception on the day. The Orange now have recorded seven picks through the first three games of the season.

“I think five defensive takeaways is extremely impressive,” said Dino Babers. “Five takeaways on defense is close to 20-21 points. I give those guys a lot of credit when they can get the ball like that.”

Syracuse managed a good defensive game through the air despite the lack of Andre Cisco’s presence. The preseason All-American reportedly collided with Ed Hendrix during pregame warmups and came out of the locker room without pads and in sweats.

The Orange defense continued to pressure Sims into uncomfortable situations as well. Seven Syracuse defenders recorded at least one quarterback hit on the Georgia Tech signal caller. Sims’s mobility also prevented ‘Cuse from creating too much havoc, with Cody Roscoe recording the lone sack of the day.

The defense continues to shine for the offense even without key players. No Cisco or Eric Coley meant that once again young players needed to step up to contribute. Carter and Hanna topped the tackles list as the secondary depth showed that Cuse can recover from injuries to stars.

The only knock on the Syracuse defense was its issue containing the run. Georgia Tech grabbed 275 yards on 52 carries, led by freshman running back Jahmyr Gibbs who had 105 yards on the ground. Multiple Syracuse players missed tackles that allowed runs to go on for more yardage than they should have, which wasn’t a big issue in the first two games of the season.

Can’t bring him down!

Perhaps the biggest evolution shown by Syracuse was its offense. After the first drive, the Orange switched to Sean Tucker as it’s primary running back and the freshman had a breakout game. He went for 112 yards and two touchdowns. Tucker ran for 11 more yards than Syracuse running backs did over the first two games.

“Sean looked like he was gonna run the ball different today,” said Babers.

Tommy DeVito rebounded from a couple of shaky games to pull in a decent performance. He went 13-24 for 194 yards, two touchdowns, and one interception that Babers said was not entirely his fault. DeVito showed off his strong arms with both touchdowns: a 46-yard bomb to Taj Harris and a 43-yard lob to Nykeim Johnson.

Take away the touchdowns and the play calling seemed to improve as well. Tucker was given the go-ahead to be more creative with his runs as he bounced to the outside with more frequency than the previous two games. Wide receivers also found themselves routinely open over the middle of the field on slant routes and DeVito hit those guys more frequently.

Saturday was also an opportunity for the Syracuse offensive line to hit the reset button. After allowing 14 sacks over the first two games, the Orange took advantage of a depleted Georgia Tech defensive line and kept DeVito clean for the most part. Syracuse’s quarterback only took one sack and two hits on a day where he seemed more comfortable in the pocket.

This was the bounce-back performance that Syracuse needed. The offense looked better from both a personnel and coaching standpoint. The defense continues to perform at an exceptional level and Syracuse got the pressure of starting 0-2 off its back. What that does to propel Syracuse heading into some easier games at the new Carrier Dome remains to be seen, but the Orange now have something to build off.

And maybe, just maybe, some faith is reinvigorated into the Central New York hopeful.