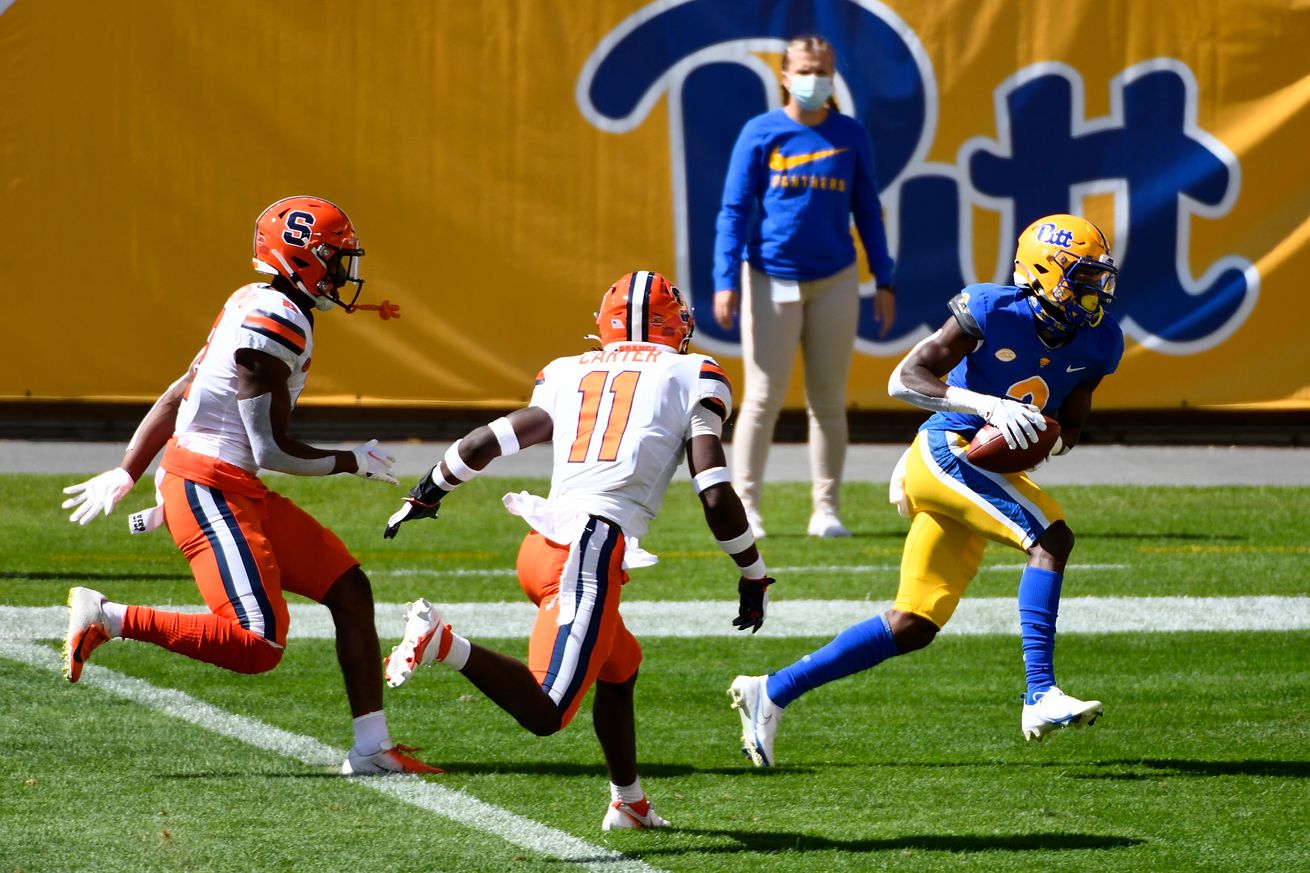 Another showcase in offensive futility

Despite another quality effort from the defense on Saturday, it was yet another loss for the Syracuse Orange football team. At Heinz Field, the No. 25 Pittsburgh Panthers took the win, 21-10, dropping Syracuse to 0-2 on the season so far.

For the second straight week, SU also kept things rather close against a ranked opponent, but the offensive struggles were simply too much to overcome. Syracuse had two takeaways on the day — both via Mikel Jones — but the offense couldn’t make anything happen in the red zone… or anywhere else on the field. The game may have also opened up a quarterback competition after Tommy DeVito appeared off-target for the second contest in a row.

‘Cuse actually opened the game up 3-0 with six minutes to go in the first quarter, but Pitt went up 7-3 soon after. A 69-yard touchdown pass from Rex Culpepper to Taj Harris put the Orange up 10-7 with over 10 minutes to go in the second quarter. However, SU wouldn’t score again. Pitt went up 14-10 in the second, then 21-10 late in the third. That was enough to take the game.

Syracuse had just 171 yards on the game, and couldn’t get much going either through the air or on the ground. Culpepper led the team with 88 yards passing and a score, going 4-for-9 on the day. Meanwhile, DeVito, was sacked seven times for the second straight game, while completing 9 of 15 passes for 32 yards.

Jawhar Jordan was the team’s leading rusher on the day, picking up 40 yards on 13 attempts (running much better in the second half than the first). Sean Tucker made a surprising appearance, and had 24 yards on four carries. Markenzy Pierre had one attempt, while DeVito actually had 29 rushing yards — he just happened to lose 40 on sacks as well.

Harris was the team’s top receiver, with three grabs for 72 yards and the aforementioned touchdown. Anthony Queeley, Nykeim Johnson and Courtney Jackson each caught three passes as well. Pierre also had one reception.

What you really care about is the defense, though. Pitt attacked Syracuse’s younger defensive backs, frequently targeting Garrett Williams and Ja’Had Carter (the latter playing for Eric Coley). Carter had nine tackles on the game, while Trill Williams and Andre Cisco each had eight. Syracuse had eight TFLs on the day. Geoff Cantin-Arku had two of those. Stefon Thompson, Josh Black, Tyrell Richards, Marlowe Wax and Cody Roscoe had the rest.

With so much onus on them, the Orange defense obviously allowed some points here and there. But they held their own in tight situations, kept Pitt to 6-of-15 on third downs (SU was 2-for-14), and also benefited from a botched snap and two missed field goals by Pitt. Kenny Pickett had another weird game — par for the course for him, really. He was 25-of-36, for 215 yards and two scores (plus the Jones interception). Pitt ran for over 120 yards on the game, but was far from effective in doing so, averaging fewer than four yards per carry.

So… that’s another loss. Syracuse’s offense started this game looking crisper, then everything was derailed by the end of the first quarter. Some of that’s on DeVito. Some of it’s on the line. And plenty is on what’s been uninspired play-calling. But clearly something needs to be adjusted ASAP, as SU aims for their first win of the season next weekend vs. Georgia Tech.