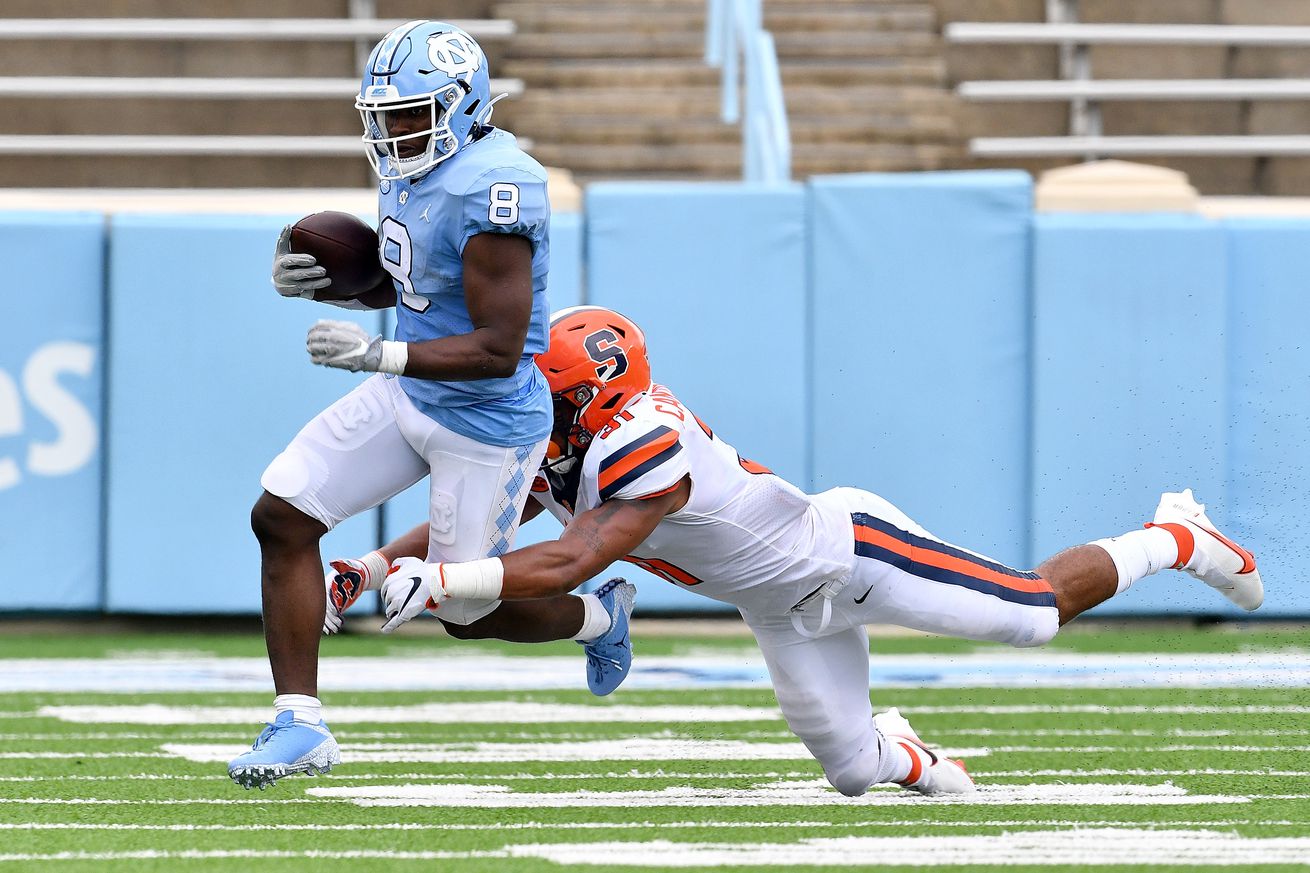 Well it was a good game for three quarters…

The No. 18 North Carolina Tar Heels beat the Syracuse Orange, 31-6 in Chapel Hill on Saturday. And yet, that score makes it sound like a much more lopsided game than it actually was.

After allowing a touchdown on the first drive, Syracuse’s defense buckled down and actually made Heels QB Sam Howell scramble a bit with constant pressure. Mikel Jones and Andre Cisco (of course) both picked off passes. The Orange even recovered a punt return deep in UNC territory. And yet, the offense just couldn’t make things happen inside the red zone.

Syracuse scored on two of three red zone opportunities, but both were Andre Szmyt field goals. The former Lou Groza Award winner also missed another try at the end of the first half. Play-calling inside the red zone was… less than ideal. SU couldn’t really move the ball much on the ground all day (30 tries for 56 yards), and for some reason didn’t adjust to emphasize the pass inside the 20. In general, In general, the offense had a difficult showing in the first game with a makeshift interior line and its top two running backs out. Play-calling never really got going, and the usual penalties also helped derail things — including taking an early Nykeim Johnson punt return TD off the board.

Tommy DeVito did look improved now that he’s healthy again, but could only do so much between line difficulties and the lack of a run game. He was 13-of-31 for 112 yards (0 TDs or INTs), but Orange receivers also dropped a score or two (Sharod Johnson, in particular, failed to haul in an easy catch in the back of the end zone). DeVito was also the team’s main rushing threat, with 30 yards on 16 carries when you adjust for sacks. UNC took him down seven times on the game.

Rex Culpepper played late for Syracuse as well, going 3-for-7 for 22 yards and an interception.

Taj Harris was the team’s top pass-catcher with five catches for 64 yards (including a team-best 22-yard reception). Anthony Queeley caught four passes for 37. Jawhar Jordan ahd three catches for 17 yards and Nykeim Johnson had two grabs for 12 yards. Courtney Jackson and Sharod Johnson each caught a pass as well.

While the score may not look like it, SU’s defense held the Heels to just 10 points through three quarters, and looked the clear strength of this squad. There are a lot of similarities to last year’s Clemson game, really. Where the defense was simply asked to do too much for too long, and the wheels just eventually came off.

Cornerback Garrett Williams led ‘Cuse with nine stops, and new linebackers Stefon Thompson and Geoff Cantin-Arku each had eight. Josh Black and Kingsley Jonathan accounted for the Orange’s two sacks. Black led Syracuse with two TFLs, while Jonathan, Marlowe Wax and Drew Tuazama each had one. Thompson, Cisco, Steve LInton and Andre Cisco each had a half-TFL as well. Ifeatu Melifonwu lead the team with two pass break-ups, while Jonathan and Williams each had one.

So… that sucked. Missed opportunities early wound up predictably biting Syracuse later. And what could’ve been as much as a 24-7 lead was quickly turned around into a major deficit by the early part of the fourth quarter.

There’s a lot to improve here. But TBD how much of it can get fixed given the O-line injuries and inexperience at running back. The two things that can get fixed, however, are penalties (8 for 60 yards) and play-calling. Hopefully we see some progress there in the coming weeks.

There will be some longer recaps after this one. Be nice to one another in the aftermath of a frustrating game.