One game into the 2020 season, Syracuse’s problems with its offensive line have persisted since last year.

Converted fullback and tight end Chris Elmore has moved to left guard to fill in for Dakota Davis, who’s injured. The Orange (0-1, 0-1 Atlantic Coast) couldn’t block for their running backs and struggled to protect quarterback Tommy DeVito and control a talented UNC front at the point of attack. When they did successfully block, the receivers didn’t create separation.

Below is a closer look at Syracuse’s offensive line performance in Week 1 against the Tar Heels (all screenshots via ACC Network):

Carlos Vettorello pushed into DeVito for a sack

Early in the second quarter, Syracuse faced a 3rd-and-10 near midfield. A first down would have put the Orange in UNC territory, but back-to-back incompletions instead put them in a third-and-goal situation.

On this play, North Carolina feigns a blitz and instead brings five rushers. SU has seven people to block: five linemen plus a running back and tight end to pick up the rushers.

When DeVito gets to the top of his drop back, he’s unable to find a receiver. He takes a split step forward to look for an escape from the pocket, but at that point, it’s too late. While the Orange are poised to pick up the extra rusher rather easily, UNC lineman Raymond Vohasek pushes Carlos Vettorello into DeVito for a sack.

On the Orange’s next full offensive drive, which came after a muffed punt and an SU field goal, they faced a 3rd-and-2 from their own 44-yard-line. Syracuse ran play-action with multiple underneath routes, and North Carolina brought four rushers initially with a delayed fifth blitzer.

When DeVito again hits the top of his drop, he’s unable to find any open receivers as he scans the field. The Tar Heels have a spy on DeVito, and he’s limited in his ability to leave the pocket. If DeVito quickly releases to the receiver running an out route after, he might be able to fit it in. But the UNC defender is closing fast. 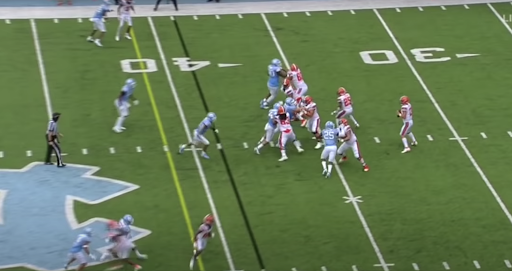 Elmore and right guard Darius Tisdale are able to pancake the Tar Heels defender and provide more than enough time for DeVito to get the ball. Still, the play results in a scramble and eventual throwaway.

An offensive line miscommunication leads to another DeVito sack

Just before halftime, DeVito drops back to pass in UNC territory with a chance to finish a scoring drive. Facing a 3rd-and-10, the Tar Heels bring a three-man rush and drop eight into coverage. To help protect, Syracuse keeps seven players in and sends only three on routes. The result is seven blockers against three pash rushers. Initially, it appears that DeVito will have a clean pocket. 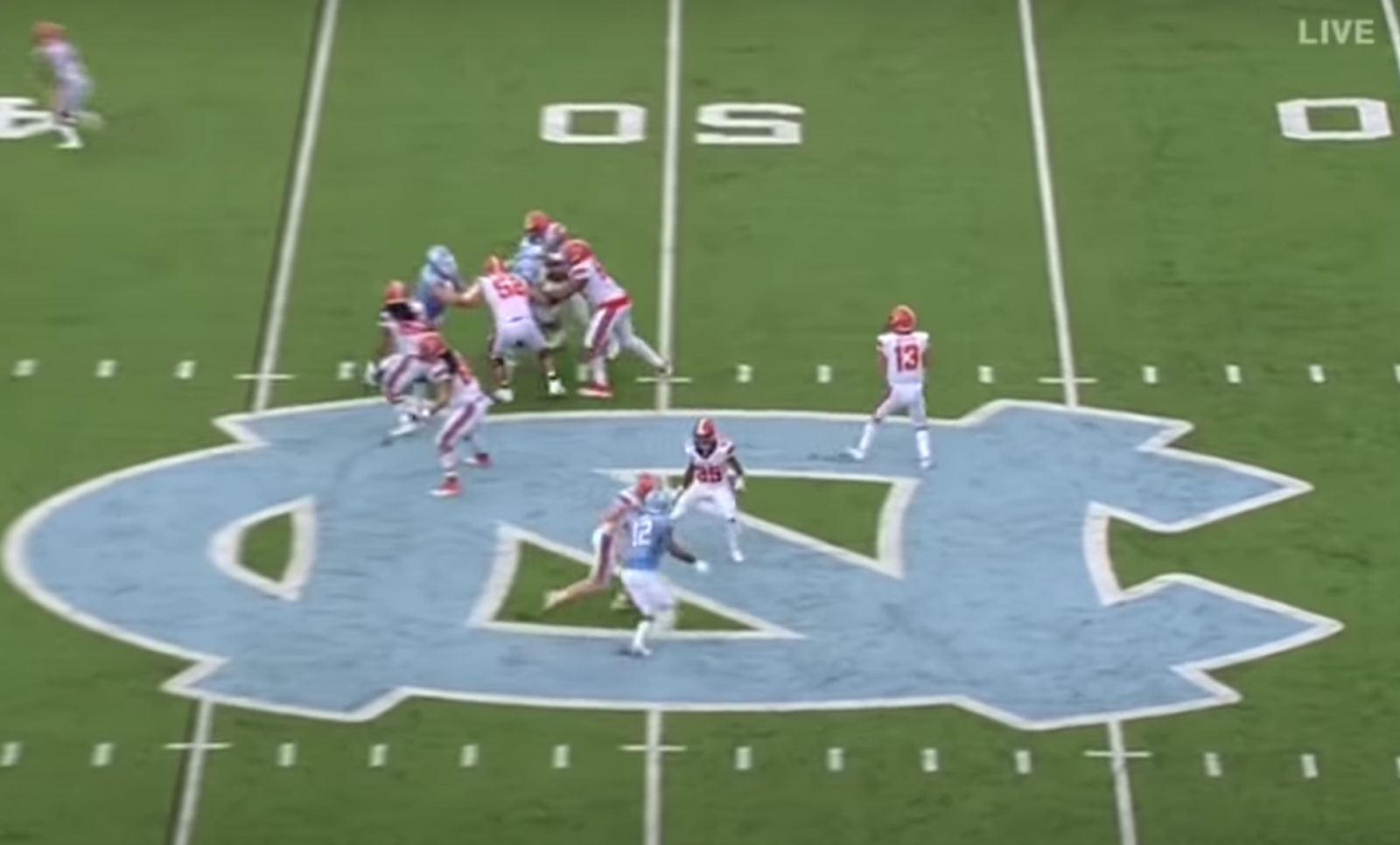 But three Orange players end up blocking one UNC defender, and three SU blockers are standing around not blocking anyone. By the next screenshot, Vohasek has maneuvered his way into a free run at the SU quarterback. DeVito does well to avoid Vohasek, but Tomari Fox is able to beat three Orange blockers en route to another sack of DeVito. 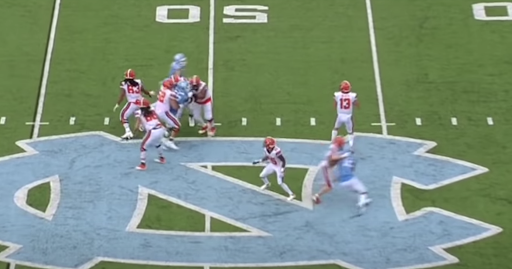 Following an interception from Andre Cisco, Syracuse attempted a run on 1st-and-10 on its first offensive drive of the second half. Like 30% of the Orange’s runs on Saturday, they were stuffed. Head coach Dino Babers mentioned that the Orange allowed too much interior penetration to UNC, and on this play, he was correct.

Here’s the view as Markenzy Pierre receives the handoff from DeVito: Two UNC players are already in the backfield, waiting for DeVito as the right side of the line collapses under the run blitz’s pressure. Sophomore right tackle Matthew Bergeron is blown by, and right guard Darius Tisdale immediately looks to block at the second level. Tisdale fails to touch the defender who sprints by him, instead stepping forward and failing to block a linebacker as Pierre is tackled in the backfield.

Even when the line blocked well, the Orange’s passing game wasn’t effective in the game’s biggest moments

Midway through the third quarter came the game’s most important play: 3rd-and-goal for the Orange at the 4-yard line, and the offensive line blocked about as well as it could be.

When DeVito reaches the top of his drop, there’s no defender near him, but none of his wide receivers are open. This was a common theme throughout most of the game film. Because of the deficiencies on the offensive line, Babers has had to keep a tight end or running back in on many plays. But more blockers means fewer players for DeVito to throw to. 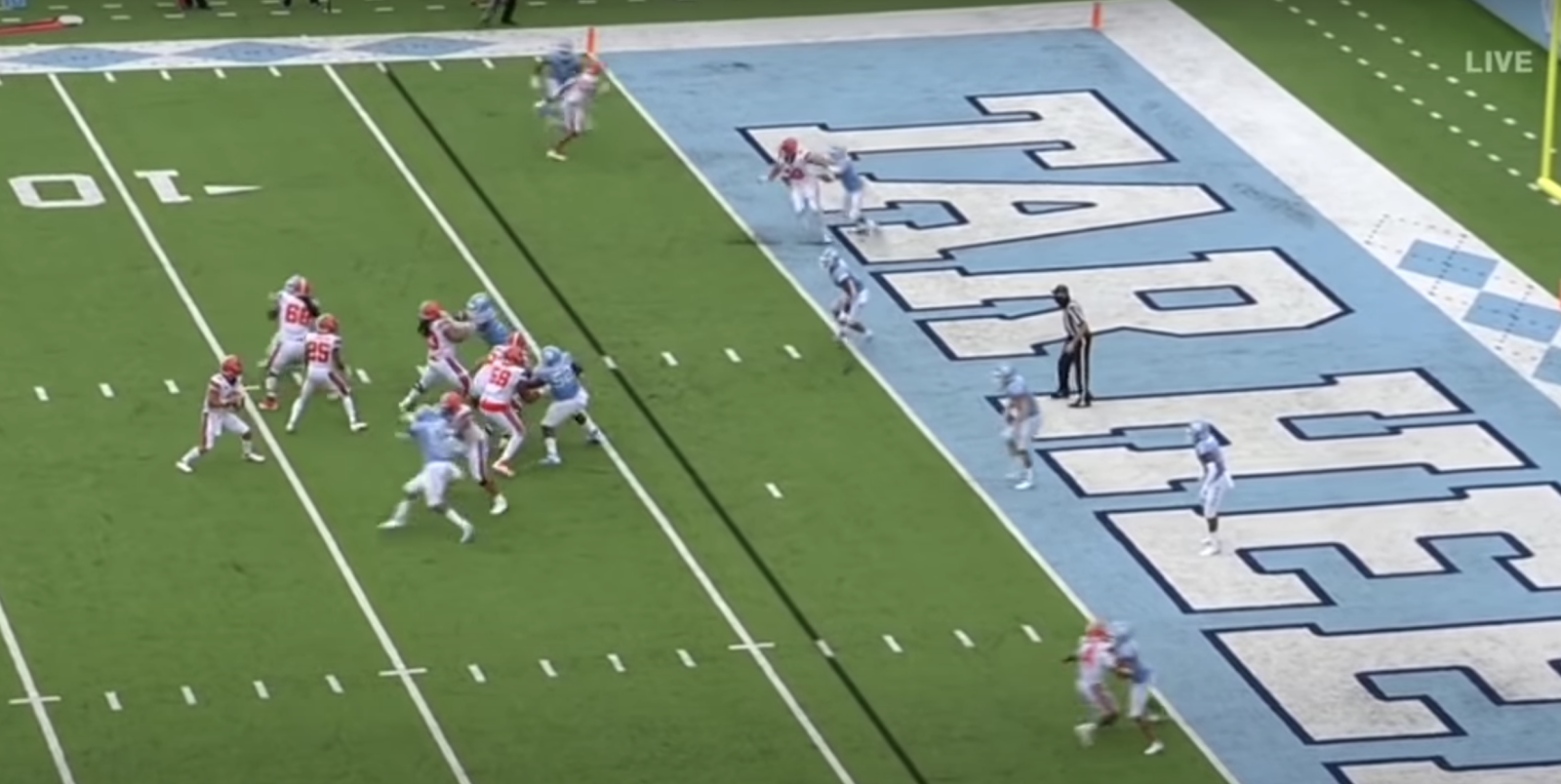 DeVito rightly steps up in the pocket to try to buy himself more time, but still, no one is open. The pocket starts to collapse after several seconds for the receivers to create more separation. But they can’t do it. DeVito is forced to flee the pocket to his right, something he did often Saturday.

DeVito rolls to his right and plants his feet for the moment that could’ve given SU the lead. Aaron Hackett is open in the end zone with his hands raised, but DeVito doesn’t see him. He then attempts to run, realizes he’s going nowhere and takes a sack.

The Orange struggled in every facet of offense on Saturday, and the team faces an even tougher test against Pittsburgh next week. Babers’ offense will need to find a way to get more receivers running routes while also protecting the quarterback. Otherwise, it could be a tough afternoon for the Orange.