Syracuse’s biggest weakness after two losses this season is its offensive line, a unit that recorded the fifth-worst sack rate (12%) in the FBS last year.

Without Chris Bleich, whom the NCAA ruled ineligible to play for the 2020 season, Syracuse’s offensive line is thin. Last week’s film review broke down the O-line’s struggles, with converted fullback and tight end Chris Elmore making his first career start at guard.

This week, we’ll look at each of Tommy DeVito’s seven sacks in Syracuse’s 21-10 loss to Pittsburgh. The junior quarterback’s been taken down 14 times already in 2020, though not all have necessarily been his fault.

DeVito holds the ball too long, takes an early sack

DeVito took his first sack on SU’s second drive while facing a third-and-long. Pitt only brings four rushers, dropping two linebackers back into shallow coverage. The Panthers still got quick pressure off the edge, as Airon Servais got bull-rushed backward.

DeVito’s first read is to his right, as Nykeim Johnson and Taj Harris both run inside routes five yards short of the first-down marker. Both Johnson and Harris are covered, and DeVito feels the heat from his blindside, so the quarterback misses tight end Luke Benson coming open across the middle for what would’ve been a first down.

Had DeVito slid to his right earlier, he might’ve had enough time to step into a throw to Benson, who was running into an open zone between an underneath linebacker and over-the-top safety. 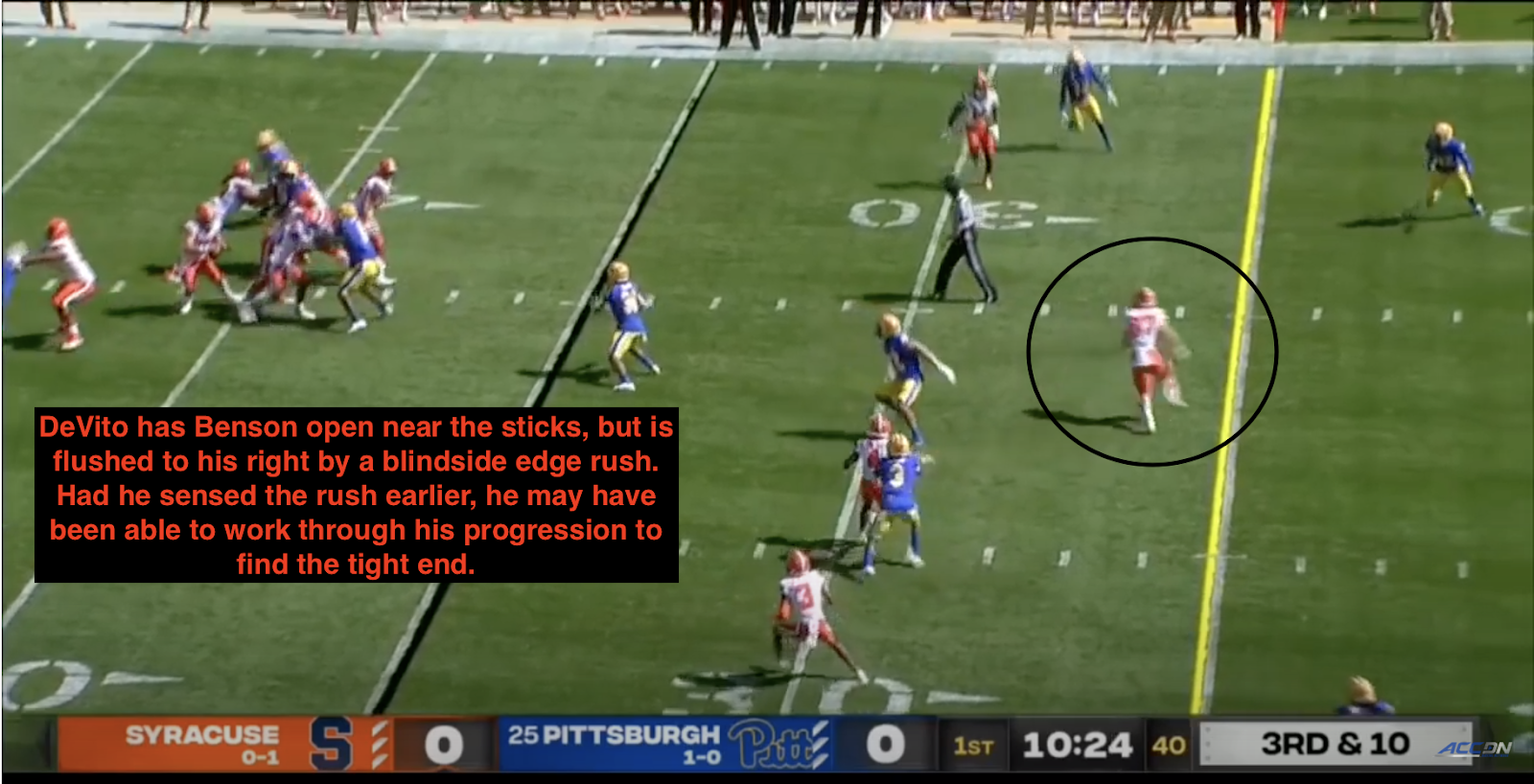 The tight ends have notably been nonfactors in Sterlin Gilbert’s offense. As this play shows, that shouldn’t be the case.

Pitt again sends just four pass rushers on this play, but this time it’s 2nd-and-10. The offensive line holds up initially, but Panthers end Rashad Weaver beats Servais and Elmore’s double team. The right side of SU’s line also gets penetrated, and DeVito feels pressure from both edges.

Still, DeVito had about three seconds to throw, so this sack can be chalked up to a coverage sack or a missed read.

The next play, Pitt dialed up a blitz. Syracuse has six players, including running back Jawhar Jordan, to pick up seven rushers. 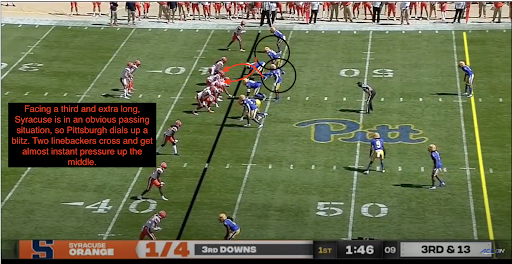 Two linebackers cross, and Phil Campbell breaks through Syracuse’s A gap. Jordan is tasked with shuffling in front of DeVito and picking up an edge rusher. Jordan comes over late, which leads to more pressure. Several defenders swallow up DeVito, and with 13 yards to go, the receivers’ routes were presumably slow-developing. DeVito really didn’t have any chance to make a play.

This play is designed to free up Benson on a double-move down the right sideline. Benson is open almost the whole time, but the play develops too slowly, and DeVito takes a sack.

If Benson and DeVito connected in the flat, Benson would’ve had an open field to gain yards after the catch. It’s unclear if DeVito, Benson or a poor play design are at fault.

This play is an example of DeVito’s elusiveness and of his potential to handle a rush. He’s a big, strong quarterback — he said he put on about 15 pounds of muscle over the summer — and should be able to shake more tackles and extend plays.

On this play, he takes a three-step drop and spins to his right as a defender makes a beeline for him through the middle. Once he evades that arm tackle, he retraces his steps back through the pocket, gets downhill and turns a potential huge loss into a three-yard gain. If the offensive line’s going to remain this big of an issue, DeVito’s going to need to make more plays like this.

Servais is probably Syracuse’s most important offensive player, and a speed move easily beats him off the edge. Off the snap, it looks like Servais doesn’t get a great jump, and he might be trying to shade right to give Elmore extra help. Either way, he’s too late to react to Weaver’s move. This happened on a 4th-and-3 near midfield, and none of DeVito’s options had reached the top of their routes before he got wrapped up.

Another double move play, another four-man rush, another sack. Syracuse had six blockers for four rushers — and one delayed linebacker blitzing — who knew the Orange wanted a big play.

At the top of the screen, Johnson and Anthony Queeley run sort of an inverted rub route, with Johnson in the slot running a wheel pattern down the sideline. DeVito fakes it to Johnson in the flat to set up the downfield, but his pocket quickly collapses as right tackle Matthew Bergeron is driven backward almost into DeVito.

Pittsburgh stacks the box on 3rd-and-8 and sends a blitz as John Morgan comes off the edge untouched. Sean Tucker, SU’s running back on the play, steps up to block in the middle, where SU’s line actually holds up well. Tucker’s left with no one to block as a free blitzer hits his quarterback.

Someone missed an assignment on this play, which isn’t necessarily Tucker’s fault, but it left DeVito out to dry.

The post Film review: Breaking down all 7 of Tommy DeVito’s sacks against Pittsburgh appeared first on The Daily Orange.