Syracuse commenced its season against Ohio, a team it hasn’t faced since 1921. But Babers and his high-tempo offense played against the Bobcats twice when Babers was the head coach at Bowling Green.

Babers’ brought his offense back to Athens, Ohio, and the Orange scored a touchdown within six plays of their opening drive. He also stuck with quarterback Tommy DeVito for the entirety of the game, despite hinting that Mississippi State transfer Garrett Shrader would receive significant playing time earlier in the week.

But DeVito didn’t have to do much in the game, as running back Sean Tucker finished with a career-high 181 yards on 25 carries. Defensively, true freshman Duce Chestnut made an impact in his debut with eight tackles and an interception.

These are the key plays that helped Syracuse in its 29-9 win over Ohio:

On his first carry of the game, Tucker takes an inside zone run for two yards before members of the Bobcats’ 4-2-5 defense collapse on him.

But on the next play, DeVito is given a read option play, meaning that he could either keep the ball or hand it off to Tucker — a decision dependent on how the defensive end, Will Evans, reacts after the snap.

If Evans — who’s unblocked on purpose — leaps at the running back, DeVito is supposed to keep the ball. Here, Evans maintains his distance from the quarterback, sidestepping to force DeVito into a decision. With Evans stagnant, DeVito gives the ball to Tucker. 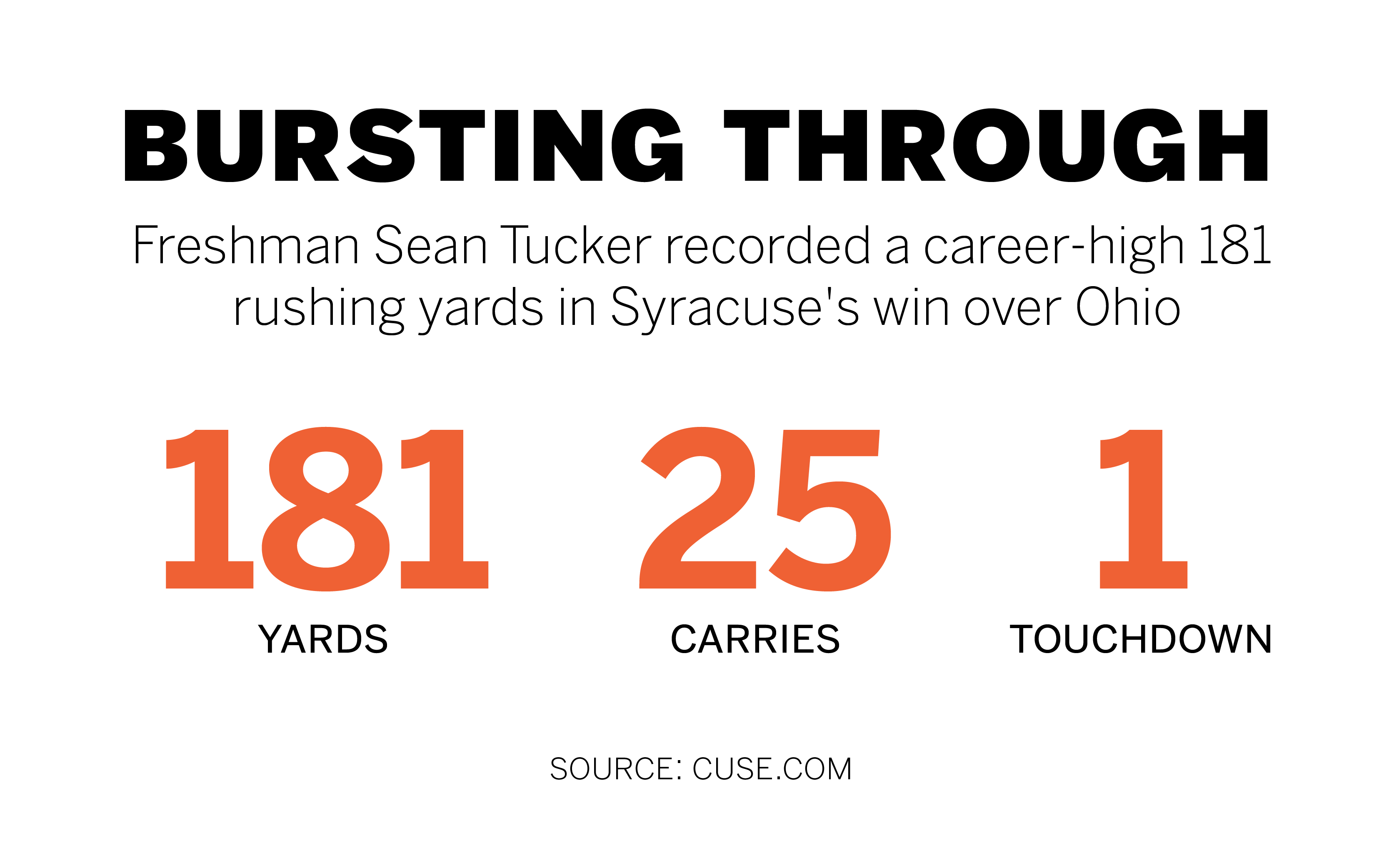 Instead of cutting inside like he did on his first carry, Tucker takes the ball to the outside, knowing that Syracuse’s offense has a three-man advantage in blocking. And with Taj Harris running a fake bubble screen on the back side, Tucker follows the white jerseys in front of him, stays on the numbers and beelines for 47 yards.

“He was running well behind his pads,” Babers said about Tucker’s play. “He got out a little bit, sometimes, but did a great job with ball security in the open again.”

If it’s not broken, don’t fix it

On the ensuing play, the Orange ran the same exact setup, with tight end Maximilian Mang still off the ball adjacent to Airon Servais. But Mang positions himself back more from the line of scrimmage, only a step or two ahead of DeVito because he’s pulled, meaning he’s looped around Evans to the other side of the field.

After Mang pulls past Evans, Mang’s the lead blocker for DeVito if he chooses to keep the ball — which DeVito does here after noticing that Evans’ slight shuffle toward Tucker opens a path for him.

“I felt good with all my decision making,” Devito said. “In the run game they were stacking the box, and I knew I had to make some plays with my legs.”

But this play also wouldn’t have been possible without the effort of left guard Matthew Bergeron, who’s the only offensive lineman to go to the next level. Bergeron quickly works on a double team with Chris Bleich at the line of scrimmage before sprinting in front of the left-side backer and pushing him into the safety, completely taking two players out of the play. This leaves a wide-open path for DeVito, who waltzes into the end zone.

Not the base stuff

Syracuse’s 3-3-5 defense entered its sophomore season this year, but Babers said during training camp the team added a lot to the defense, specifically in its ability to change sets. These differences from SU’s main set helped its defense hold Ohio to no touchdowns.

After a punt from James Williams places Ohio at the one-yard line, SU’s defense puts five players at the line of scrimmage, the same amount it usually has in its backfield. Before the snap, the Orange had four players on the defensive line: Caleb Okechukwu, Cody Roscoe, Curtis Harper and linebacker Stefon Thompson — who is usually at the second level in the base 3-3-5.

Immediately before the snap is called, Syracuse sends another player to the line, linebacker Marlowe Wax, which creates another man disadvantage for Ohio.

Ohio incorrectly reacts to the shift by Syracuse’s defense, leaving Okechukwu unblocked and Wax with only one man to beat. Wax blows through the line alongside Okechukwu to combine for the tackle and a safety.

“The defense kept them out of the endzone for the most part,” Babers said. “That’s not a ‘gimme’ football team, that’s a football team that is going to challenge for their side of the conference, and they’re physical.”

Adding more to the formula

Heading into halftime, DeVito only had 45 passing yards. He completed seven out of his 10 attempts, but at the end of the first half, he narrowly missed Taj Harris on a wide-open corner route in the end zone.

“It’s one of those deals where you barely miss by inches. And that’s what people say this game is all about, a game of inches,” Babers said about the play. “Hopefully we’ll be able to connect on those things down the road.”

Because of the missed timing in the first half, Syracuse didn’t force any passes in the second half, returning to the concept that got them 12 points on the board — ground and pound.

But SU added more nuances to the plays it ran earlier in the game, making players like Harris move before the snap to confuse the defense. On this play, Harris motions behind DeVito prior to the snap to make a triple option: DeVito can toss Harris the ball, keep it himself or hand it off to Tucker.

Harris’ motion causes the second level of Ohio’s defense to shuffle toward him, creating a disadvantage on the left side of the field. Again, the play is left in DeVito’s hands, but the defense makes it easy for him as Evans fully commits toward the quarterback.

Even before Tucker crosses the white line, DeVito puts his hands up signalling a touchdown, as the Orange’s offense confuses Ohio another time.

The post Film Review: Breaking down 4 key plays from Syracuse’s win over Ohio appeared first on The Daily Orange.