Syracuse head coach Jim Boeheim was not pleased with his team’s defense in the season-opener against Bryant. He felt Syracuse was unprepared for the game after allowing 84 points and nearly losing.

Syracuse (2-0) may have only practiced twice in the six days leading up to the team’s game against Niagara (0-2) on Thursday night, but the Orange improved defensively by forcing Niagara to start their offense further from the basket and by contesting 3s more often than they did last game. The Orange held the Purple Eagles to 6-of-36 from beyond the arc.

The Orange’s opponent quality is about to improve in future games, and the interior defense has yet to be tested. Here’s a look at some defining plays for the Syracuse defense in the 75-45 win against Niagara:

Niagara’s first basket of the game came on a 3-pointer, one of just six 3s the Purple Eagles made Thursday night. This play started with Raheem Solomon passing the ball from the right wing to the top of the key to Marcus Hammond. As Hammond receives the ball, he pump fakes a bounce pass into the interior, which draws Richmond closer to the center of the zone. Richmond and Joseph Girard III are both keyed in on Hammond, while Alan Griffin is watching the other shooter on the left. 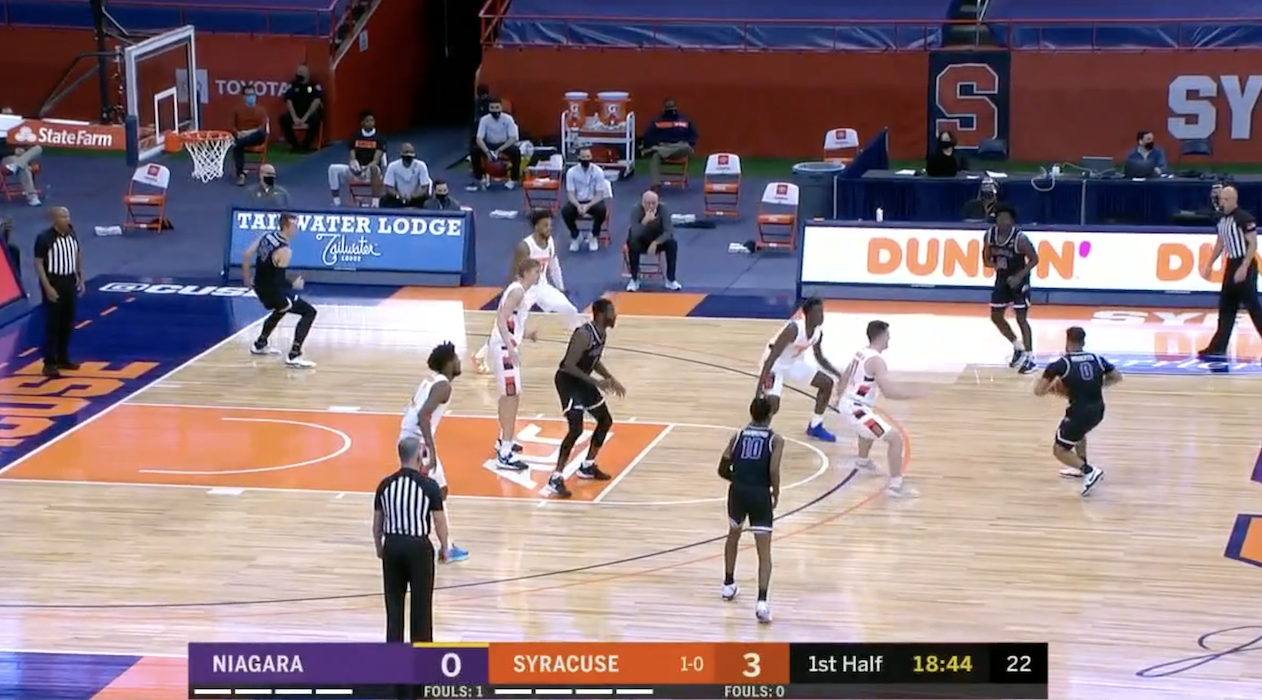 Richmond tucking in as far as he does leaves Solomon open on the right wing, ready to shoot with no one in his face. As shown in the second image, Richmond and Griffin both rush to get a hand in Solomon’s face, but they’re way too late.

Griffin is forced to step up, and if Solomon didn’t want to shoot, the Purple Eagles could have had an easy 2-on-1 high-low situation with Marek Dolezaj all alone underneath.

Richmond is a true freshman who Boeheim said is still learning the zone. He showed glimpses of being a high-energy defensive guard later in the game. 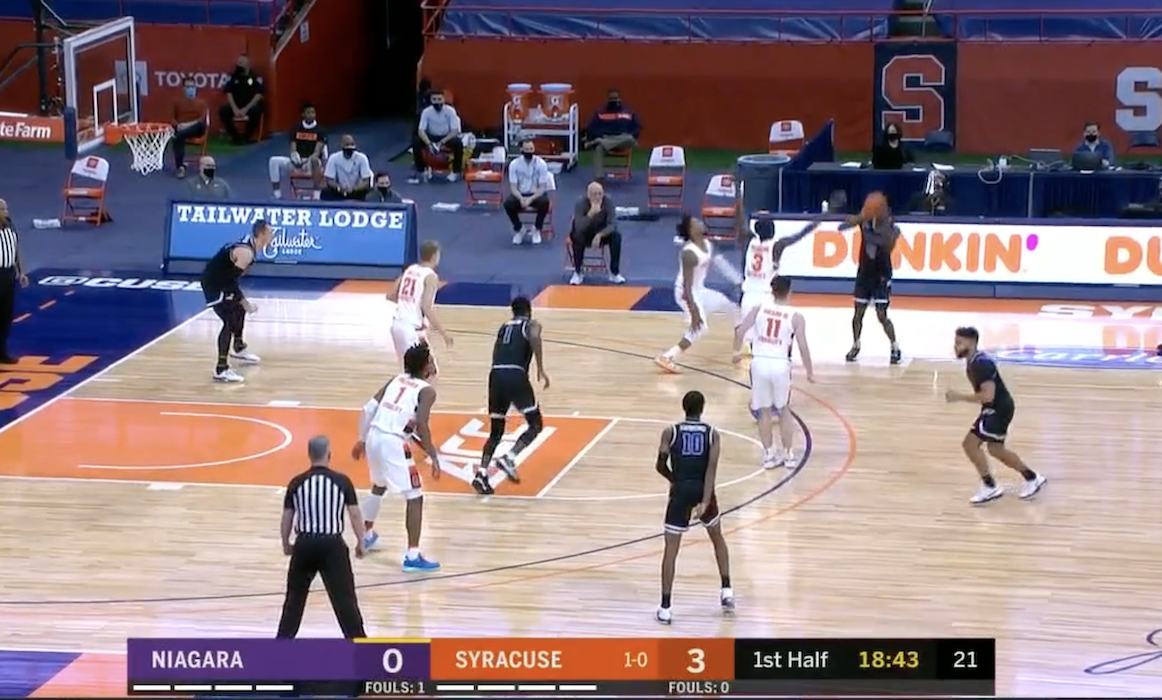 Boeheim said postgame that Griffin is also learning how to play in the 2-3 zone. Since he’s playing at both the guard and forward position, Griffin has had more difficulties adjusting, Boeheim said. He was very aggressive against Niagara’s 5-out offensive scheme on Thursday night, often pushing up above the foul line and trying to disrupt shooters. 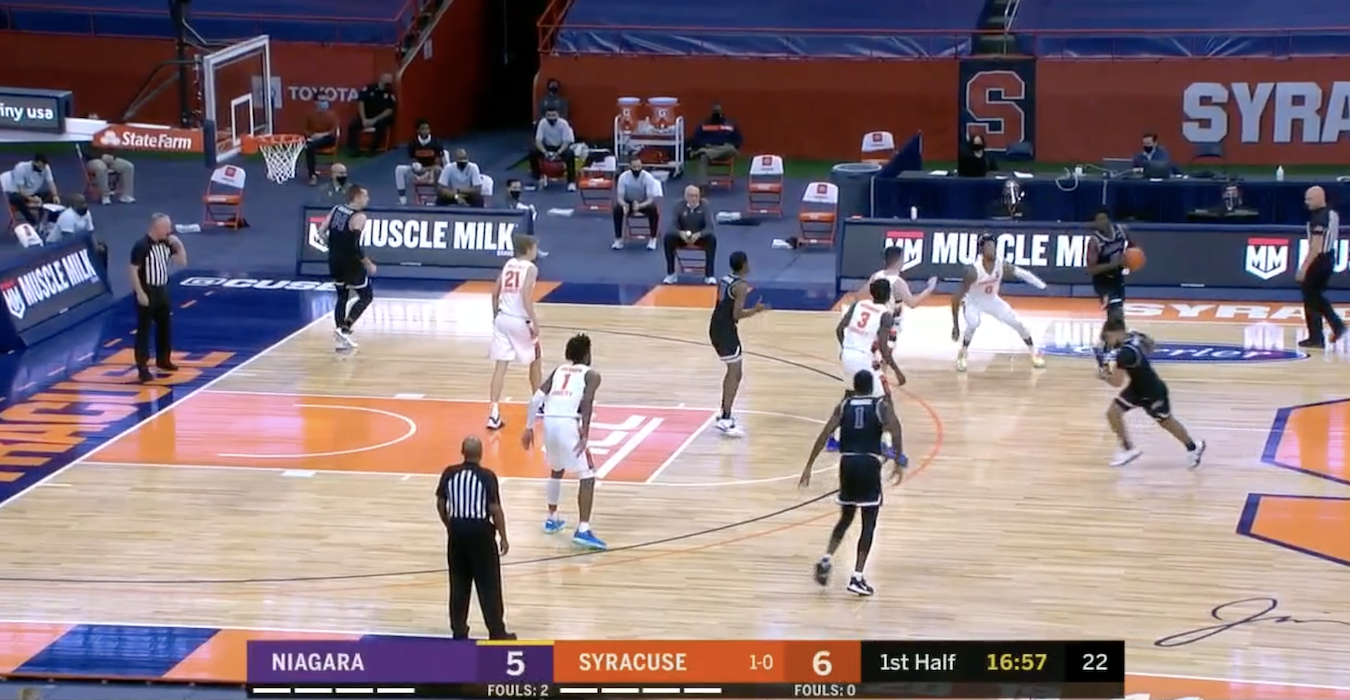 Griffin first hops out to force a jump shooter off the 3-point line. Later in the possession, he steps in front of a pass and nearly generates a steal and a fastbreak. Instead, the ball careens off his hand for a deflection.

Griffin and Quincy Guerrier forced the Purple Eagles to start their offense further from the 3-point line than they wanted, especially during that 24-2 run in the first half.

As the Orange play against teams with more of an interior presence, Griffin may need to adjust to provide interior support for Dolezaj. But on Thursday night, his defensive activity was on display. 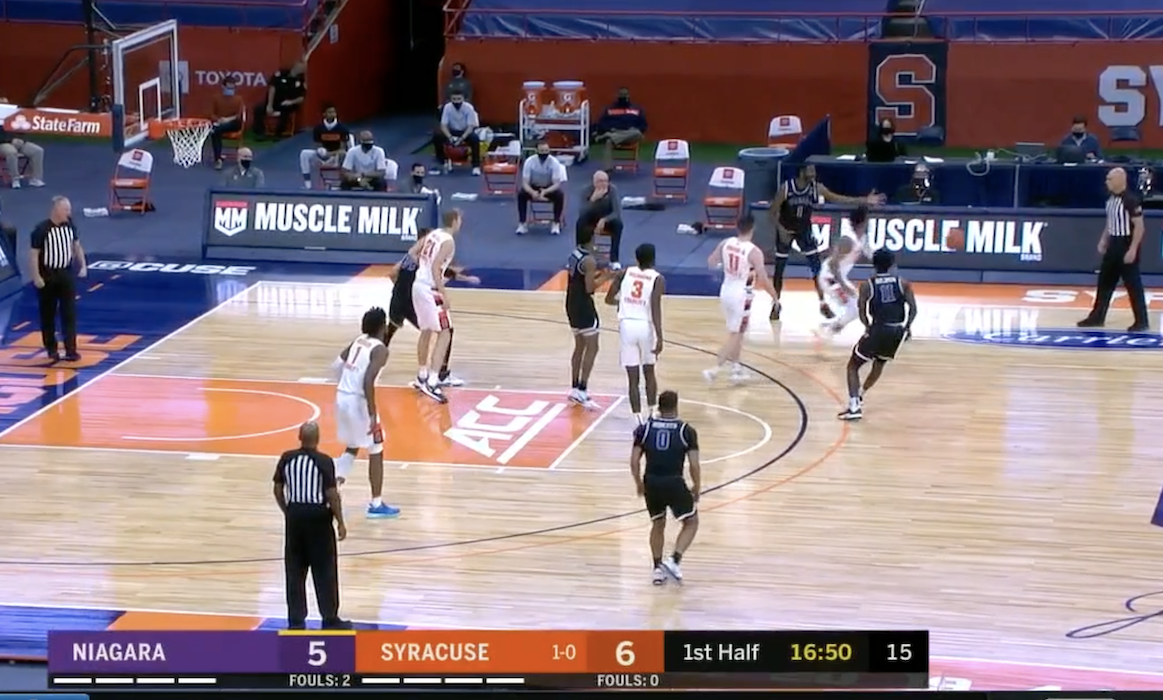 Richmond records a block by being more aggressive on the closeout

Syracuse’s defense improved as the game went on, but they were beneficiaries of poor shooting from the Purple Eagles when they did have open looks. With eight minutes to go in the first half, Richmond steps out beyond the 3-point line and blocks a lengthy 3-point attempt from the Niagara shooter. 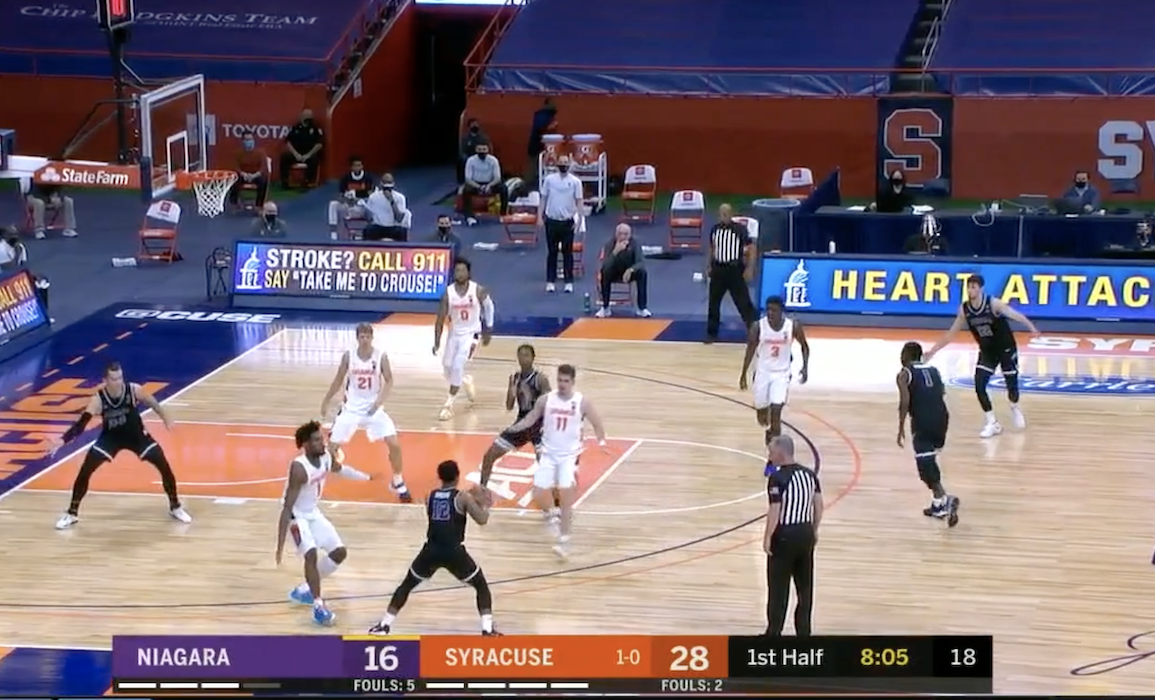 This was a significant improvement compared to a few other closeouts where Richmond was late trying to interrupt the shot. Even though the Orange weren’t able to corral the rebound, they eventually got the stop and prevented a score. 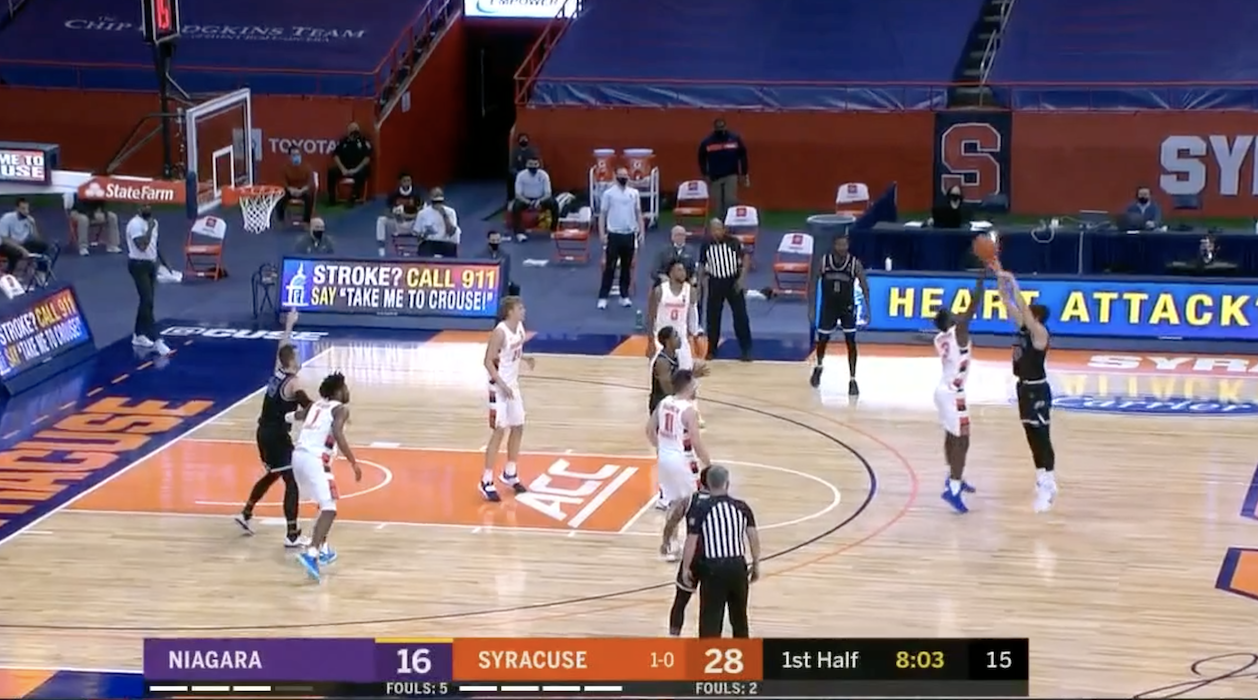 Richmond’s increased height and athleticism compared to Buddy Boeheim and Girard was noticeable for the Orange at the top of the zone. He looked much more active and disruptive overall than the Orange’s two starters did against Bryant.

While Niagara couldn’t make any shots, the same defensive issues persist for SU

The Orange had one of their worst defenses under Boeheim last season, as Syracuse’s zone allowed frequent and easy entry passes to the free throw line. On this possession, Syracuse — specifically Girard — does just that, allowing an entry pass with little resistance. Girard doesn’t have his hands up, and the ball is easily thrown past him. 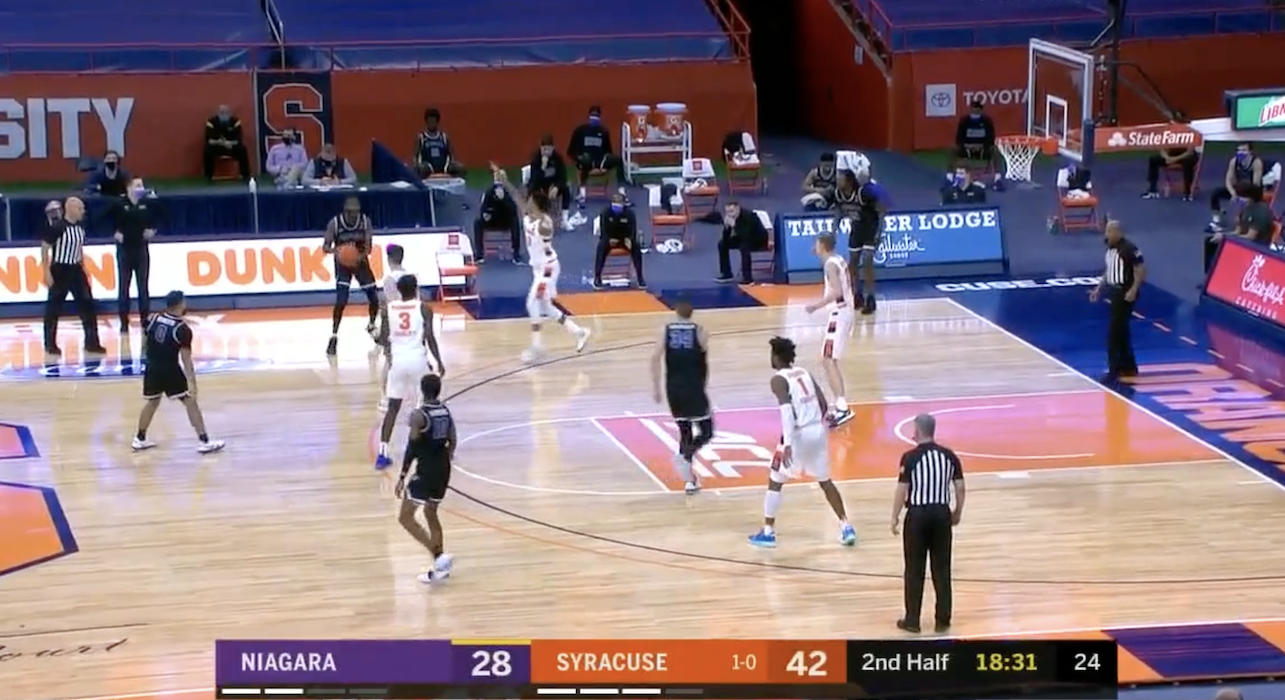 As the Niagara forward catches the ball with his feet on the edge of the foul line, Dolezaj has no choice but to apply ball pressure and step up in the lane. The result leaves Guerrier stuck between the backside player cutting to the basket. He can elect to give up the wide-open 3 on the right elbow. 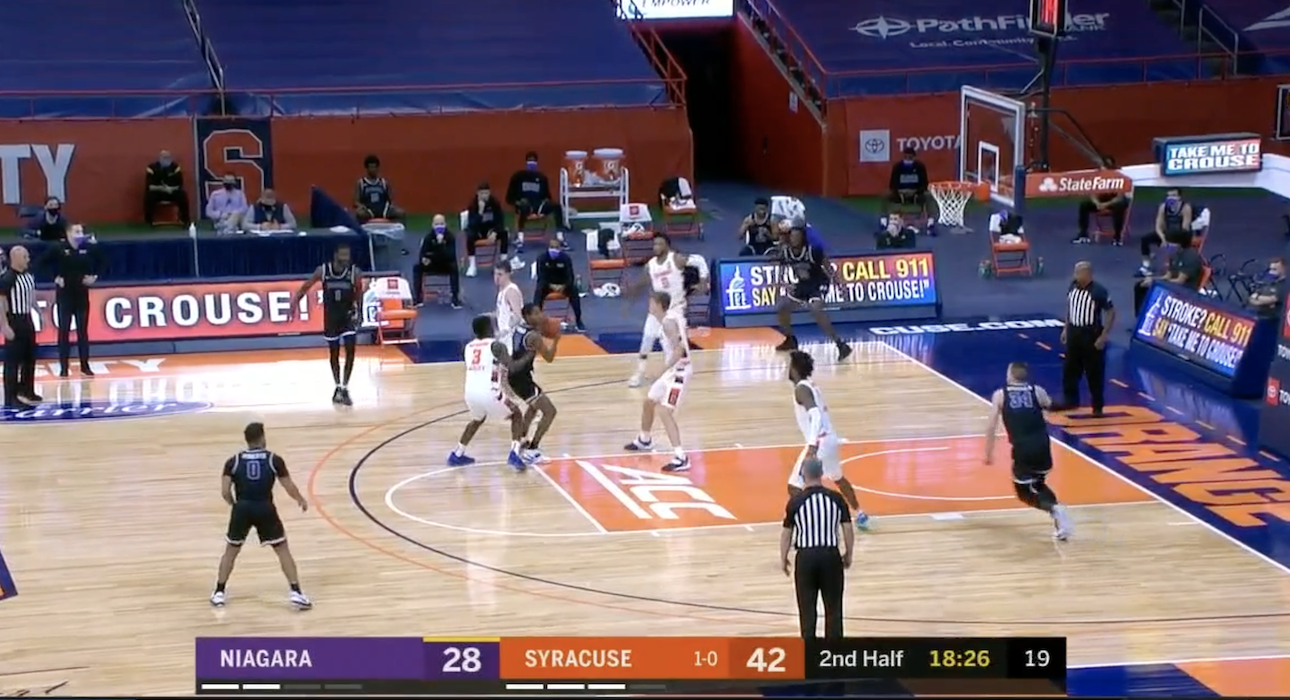 Guerrier misses the backdoor cut, and it turns into an easy pass and lay-up. While Niagara isn’t built to take advantage of Syracuse’s inside, future opponents will use this playbook frequently until the Orange prove they can stop entry passes or disrupt the easy passes through the zone.

The Orange’s defensive success stemmed from forcing Niagara to start its offense much further from the 3-point line than they did against Bryant in the opener, and Dolezaj’s deflection on an entry pass with 11:30 to play is one thing that SU needs a lot more of in 2020-21 to improve defensively. Syracuse had one of its better defensive possessions of the night here, as the Orange’s zone rotates well while Niagara runs through its motion offense. 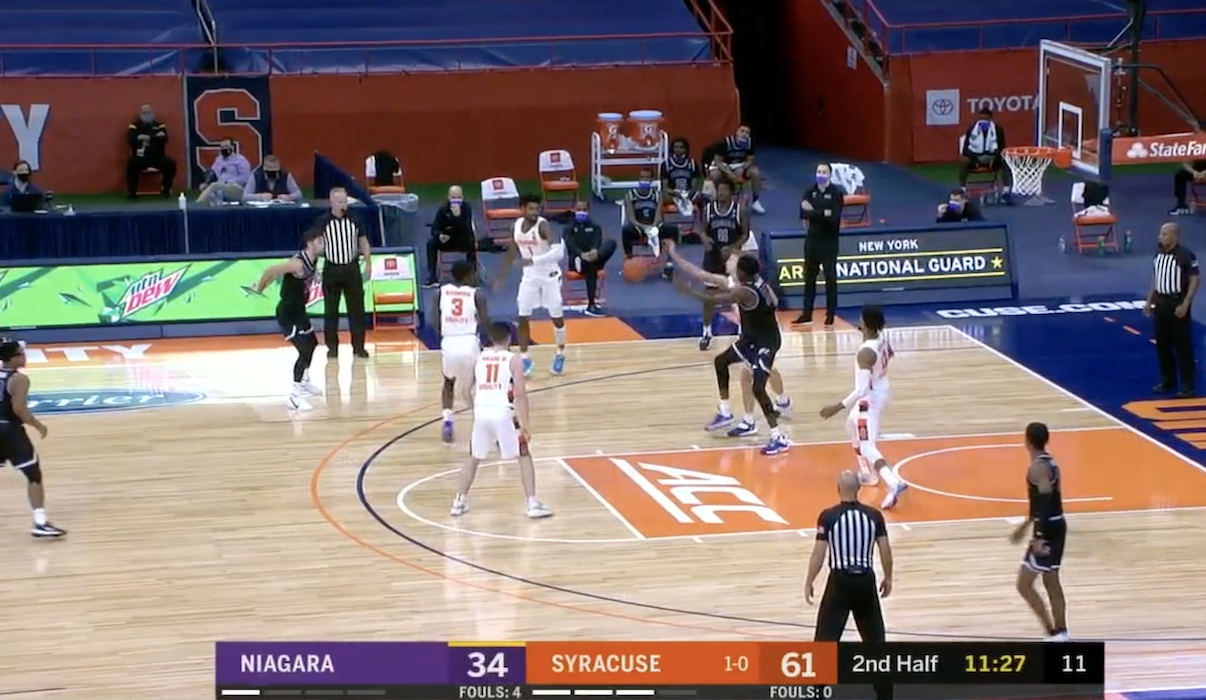 When the forward tries to post up Dolezaj — which will happen a lot more against bigger teams in the weeks to come — the senior forward pokes the ball out before the opponent can catch it and get into a post move.

Richmond grabs the loose ball and starts the transition, where Syracuse dominated on Thursday night. The result was an easy SU layup by Guerrier on an assist from Griffin that pushed Syracuse to a 29-point lead.

The post Film review: A closer look at Syracuse’s improved defense against Niagara appeared first on The Daily Orange.