Felisha Legette-Jack had to swear her son David Jr. to secrecy for two more days. Shortly after excitedly calling her husband, David, Legette-Jack called her son after she was just named Syracuse’s next women’s basketball coach. She had come home to pick up a few things before returning to her Buffalo office when Syracuse Director of Athletics John Wildhack called her.

“I want you to know that you’ve earned the right to be the head coach here at Syracuse University,” Wildhack told Legette-Jack. “Will you accept this position?”

Legette-Jack told him it’d be an honor and a privilege to return to her alma mater and “try to take it even higher.” Two days later at 3 p.m., SU officially announced Legette-Jack as head coach.

Legette-Jack’s hire began what Wildhack called “a new book,” in the program’s history. After 33 years as a coach — assisting at Boston College and Syracuse before leading Hofstra, Indiana and Buffalo — Legette-Jack returned to the school that sits minutes from her childhood home and her mother, who has Alzheimer’s.

Former head coach Barbara Jacobs saw Syracuse’s Twitter post announcing the hire while she sat alone in her house. Legette-Jack called Jacobs, her head coach while at Syracuse, immediately afterwards. “Coach, we did it. I’m coming back to Syracuse,’” Legette-Jack told her. They spoke about what needed to be done to change the program’s culture, one fractured by allegations against former head coach Quentin Hillsman that led to his untimely resignation.

I just think that she’s the right person for the role. That’s the only thing that I can think is that it’s long overdue.

Once Jacobs hung up, she turned to her two cats, Logan and Bailey, and screamed. Legette-Jack’s former teammate Vera Jones remembered squealing in her room after receiving a text from a group chat composed of former teammates and coaches Legette-Jack played with at SU. Alston breathed a sigh of relief. Danene Hopson, another former teammate, screamed, called a few other teammates and popped a bottle of Veuve Clicquot. “We were all jumping up and down in different states,” Hopson said.

For Legette-Jack’s former teammates and coach, her hire was long overdue but one she earned. Wildhack made sure to reaffirm during the three-hour interview, and when he called to offer the job, that Legette-Jack wasn’t just being handed the position — her recent jersey retirement or the fact that she’s an SU alumna did not play a major factor in this decision. It was her work turning a Buffalo program into a perennial Mid-American Conference contender and her work at previous stops proved she was worthy.

“She is a disciplinarian,” Hopson said. “She coaches with integrity. She’s good at what she does. And she’s very, very passionate about it.”

Legette-Jack knows the weight the block “S” carries and plans to capitalize on that while recruiting, she said. Calling everyone and sleeping less is how she believes she can start to turn the program around, one in a “rebuild scenario” that requires a lot of heavy lifting, Alston said. Her black Apple Watch has been blinking more frequently — always another phone call en route to her lofty goals of building a national championship contender.

Legette-Jack has already filled out the roster with two incoming freshmen and seven transfers — including four from Buffalo. She flanked her bench with Khyreed Carter to address out of bounds play, Kristen Sharkey to help coach defense, and former teammate Sue Ludwig as the offensive counterpart. 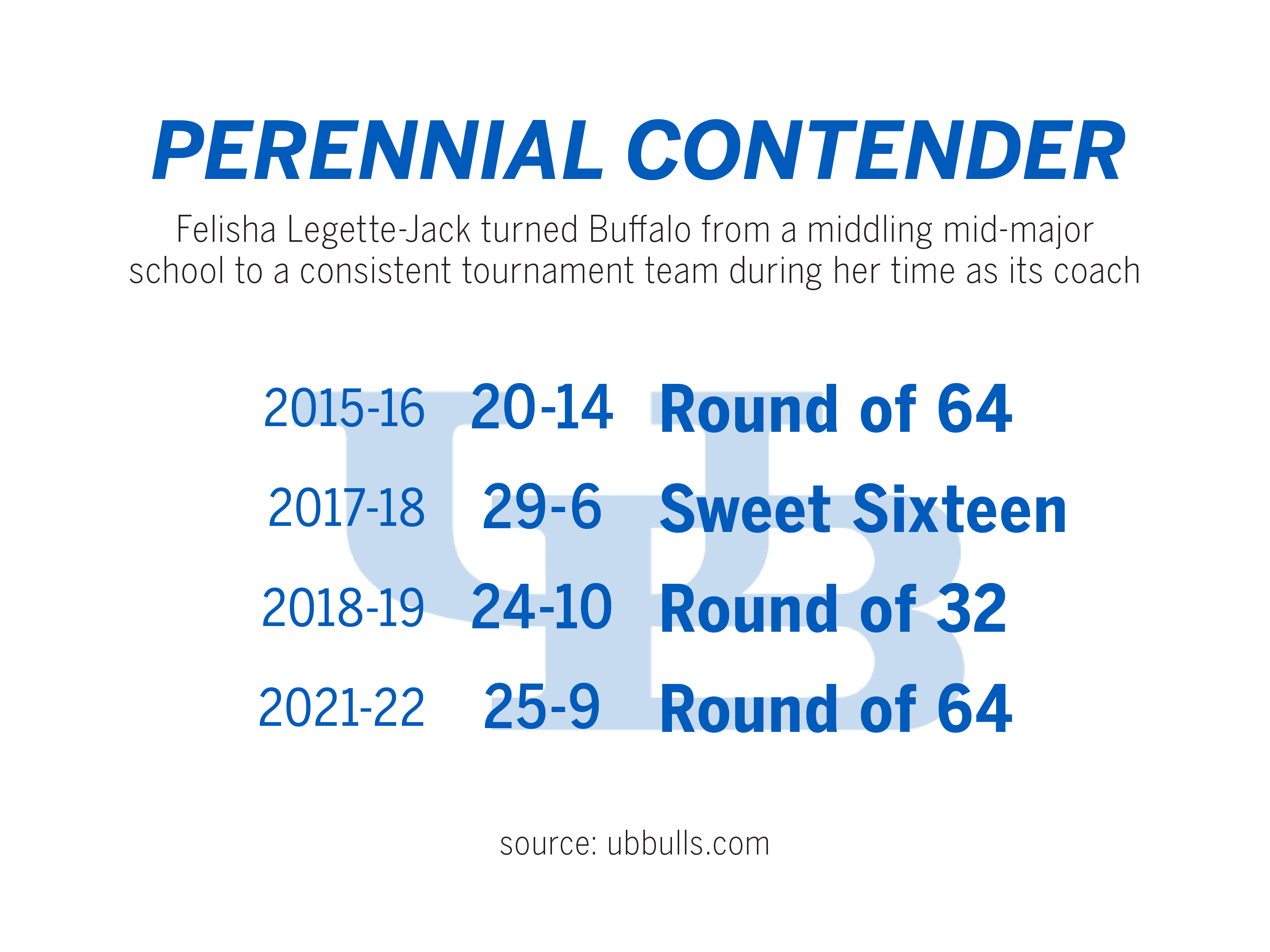 Bringing in Ludwig wasn’t a quick phone call, Legette-Jack said, but rather an ongoing conversation for roughly 10-15 years. And after all those years, it took just one phone call. “I’m all in,” Ludwig told her.

Legette-Jack said she wants teams to enter the Dome and fear Syracuse on the defensive side. Her teams in the past have tried to hold opponents under 60 points, and she wants to extend that to Syracuse. She expects her players to see the game as “a microcosm of life,” and to tell their stories through their play. Legette-Jack knows they might tune her out sometimes, but her “intense” coaching style is for the kid in the top left corner of the Dome who’s never seen the team play, she said.

“You might be the reason why she becomes an athlete, a great student, a passionate person,” Legette-Jack tells her players.

Legette-Jack knows next year’s team needs post players, and doesn’t care where they are from, but she wants to find them. She said she wants to saturate her team with in-state talent, while also getting the team to a point that reflects the university’s global representation.

Legette-Jack has lofty goals for Syracuse, and some of her former teammates said she’s the only one that could achieve them. Shifting her focus, Legette-Jack pointed at a photo of the Dome packed with a capacity crowd for a men’s basketball game, something she looks at every day in her office. One day, she believes she can get there. Someone told her it’d be awesome to see 15,000 fans for a women’s game. Why on 15,000, she asked.