Felisha Legette-Jack grew up in Syracuse’s Brick City neighborhood. She and her family could see the Carrier Dome up the hill from their front door.

So when Legette-Jack was repeatedly told she could never play basketball at any big Division I program like Syracuse, her younger brother Ronnie Legette laughed and watched all the doubt propel his sister to stardom at their hometown college.

On Saturday afternoon, the two siblings, along with the rest of their extended family, stood atop that hill on the Dome’s court, looking up at the rafters. Their attention was centered on the stadium’s section 312, where Legette-Jack’s No. 33 now hangs by itself. The banner settled into the stadium’s rafters and Legette-Jack officially became Syracuse’s first female athlete to have her jersey number retired. Her program records in points, rebounds and field goals held for nearly 15 years after she graduated from SU in 1989.

“I was excited by the fact that they chose her,” Ronnie said. “I was wondering why it took so long, more so than being surprised at it.”

Prior to the jersey retirement, a commemorative video of Legette-Jack’s high school and collegiate basketball career played. It featured her cousin, Angela Washington, whom she shared the court with at both Levy Middle School and Nottingham High School.

“Just watching the old flicks took me way back,” Washington said. “She was such a powerhouse and I’m like ‘Oh my god this girl is amazing.’”

Legette-Jack is now in her tenth season as the head coach of the University at Buffalo women’s basketball program. The entire Bulls squad sat at center court at the Dome and watched their coach deliver a heartfelt speech, sending a message similar to what she had consistently projected on her players in practice. Prior to games and during practices, Legette-Jack often shared fragments of her playing story, her players recalled. 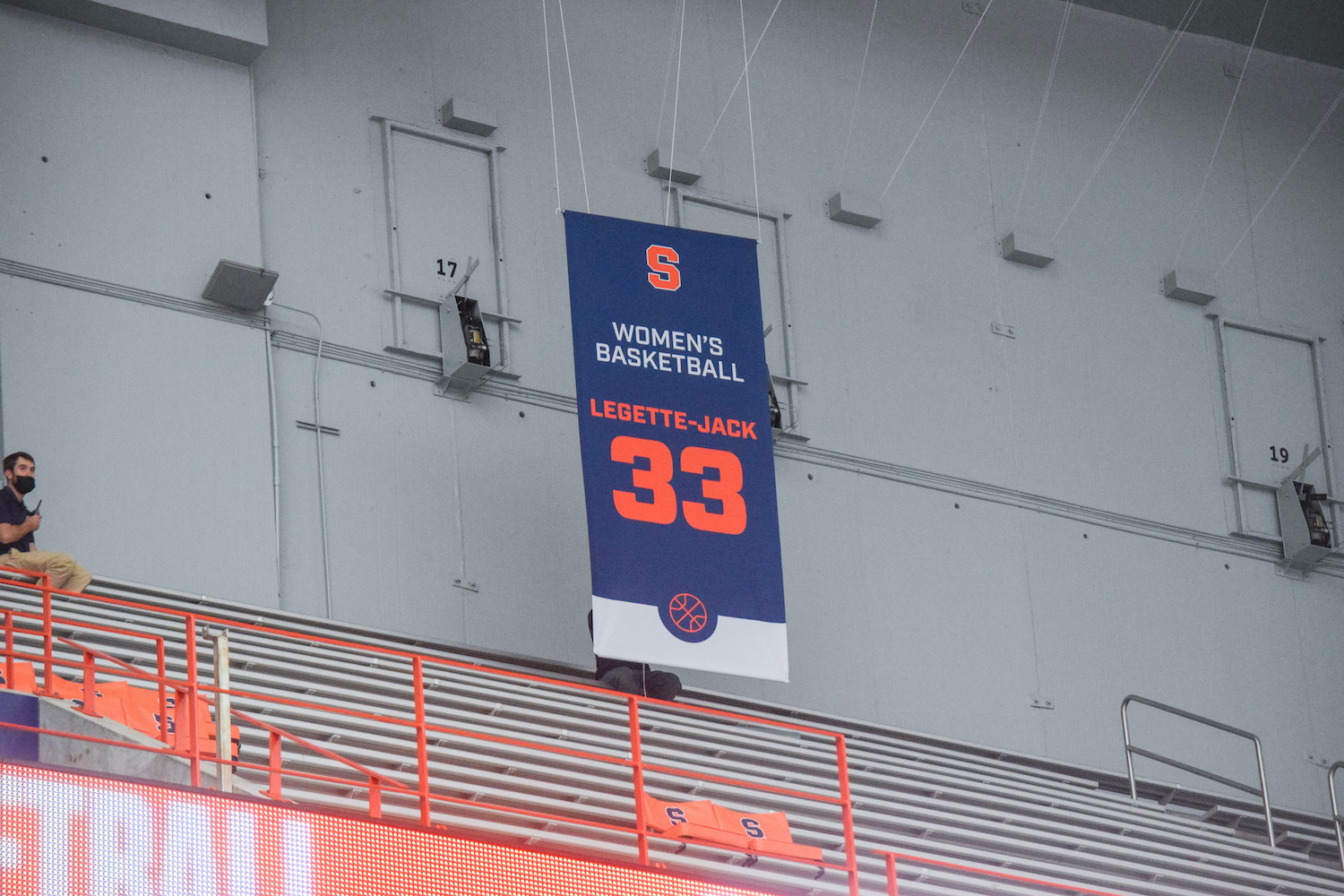 “That’s definitely motivating to see how far she’s come and to see where she’s still going,” Buffalo senior forward Adebola Adeyeye said. “Everyone really came together for her because she always comes together for us.”

Legette-Jack dedicated her acceptance speech to her mother, who is currently in the hospital. On Saturday, Legette-Jack said she visited her mother, placed her head on her chest and told her, “Mom, they know your name.”

Despite acknowledging her own success, Legette-Jack views her jersey retirement as only the beginning of a lengthy recognition process for Syracuse’s female athletes.

“There’s nothing special about me, I just did the work,” Legette-Jack said in her speech. “I’m so humbled, but there’s more boxes for us to open.”

As the current women’s basketball team is composed of majority transfer players, Doug Murray — the father of captain Najé Murray — said retiring No. 33 served as a timely welcome to the Syracuse culture for the team. Saturday’s game was Doug’s first time at the Dome to watch the team play, but he said he believes the game’s historical significance will inspire this year’s squad.

“It’s pretty cool that she’s on the team this year,” Doug said. “Sometimes the stars line up — it’s a pretty big day.”

Legette-Jack’s jersey retirement is a feat former Syracuse athletes view as monumental. Former Syracuse football player Pat Killorin, who was an All-American center in 1964, came to the Dome on Sunday afternoon for the retirement ceremony.

For the first time in Syracuse history, a female athlete joins the rafters in the Carrier Dome.

“There’s nothing special about me. I just put in the work,” Felisha Legette-Jack said about the honor. @DOsports pic.twitter.com/IMM8vZnnFT

Killorin played alongside Floyd Little, who wore the legendary No. 44, a number that has been retired for many years. As Killorin and his wife started following the women’s basketball team within the past four years, he took notice of the amount of successful talent from athletes in the past 50 years of female athletics at Syracuse, including Legette-Jack.

“She in particular was one of the gals that probably really helped develop our program here,” Killorin said. “That’s why we wanted to be here to honor her for all of her achievements.”

Legette-Jack and those closest to her know how much of an impact she’s had on the Syracuse community. Ronnie said he believes her achievement could be the most encouraging for Syracuse’s inner-city youth to see someone who “walked down the same hallways they walked (and) the same streets that they walked.”

Ronnie joined Legette-Jack as she stood next to a white No. 33 on the edge of the court. To the banner’s right was the mainstay white No. 44, the most notable retired jersey number for a male Syracuse athlete.

Now his sister’s number is a new staple for Syracuse athletics, but Ronnie said it’s just the primary foundation.

“Let’s start the whole tradition from scratch. We’ve got a Club 44, let’s see a Club 33,” Ronnie said. “Let the women have their own club as well and let’s identify those people that’s coming behind her. It shouldn’t be another 50 years before it happens again.”