Tyler Lydon cleanly finished a layup to record his first points of the night. Boeheim’s Army led Always a Brave by four points when the Syracuse alumni team forced an errant throw from Nate Kennell. With the exception of a 3-pointer from Kennell at the end of the first quarter, the Bradley alumni team sputtered. On the other end of the court, as AAB attempted to regroup, Eric Devendorf clung to his defender.

In three minutes during the second quarter, Devendorf recorded a steal, an assist and a 3-pointer, aiding a 27-10 run for Boeheim’s Army that gave them a commanding lead for the remainder of Wednesday’s game.

Boeheim’s Army has made it to the quarterfinals each year since it entered The Basketball Tournament competition in 2015. Devendorf was 27 and playing professionally in New Zealand when general manager Kevin Belbey asked him to join the team. Belbey saw the success of the first TBT and wanted to construct a Syracuse-based alumni team to compete in it. Since then Boeheim’s Army, and Devendorf, have been staples of TBT, synonymous with deep runs and top-tier teams known to come up just short of the ultimate $1 million prize.

The team is in the midst of another run for the championship, but along with its lineup, Devendorf’s play is different than in past years. He opened the tournament off the bench for one of the first times in his career on a team associated with Syracuse. However, in BA’s physical 69-54 win over Always a Brave, Devendorf showcased the talent he once harbored at Syracuse and that head coach Jeremy Pope believes he still has.

“He’s been invaluable,” Pope said of Devendorf. “He’s been the only guy that’s been a part of this deal every year. For him, this means a lot.”

He’s a part of the Boeheim’s Army bench unit that scored 34 points, and when he came off the bench for Keifer Sykes, it sparked something in him, Pope said. That spark allowed Devendorf to set picks knowing he’d get shoved by an opposing player. Both coaches complained — either at halftime or after the game — about the lack of calls on potential fouls, with Devendorf consistently finding himself on the floor of the Peoria Civic Center.

Prior to the start of the tournament, fans of Boeheim’s Army wondered if this could be the year Devendorf finally fell off. At 34, he’s one of the oldest players on the team. Shaun Belbey, assistant coach and assistant general manager, said they were looking for Devendorf to step up as a “veteran leader,” as opposed to the star Boeheim’s Army teams of the past have leaned on. 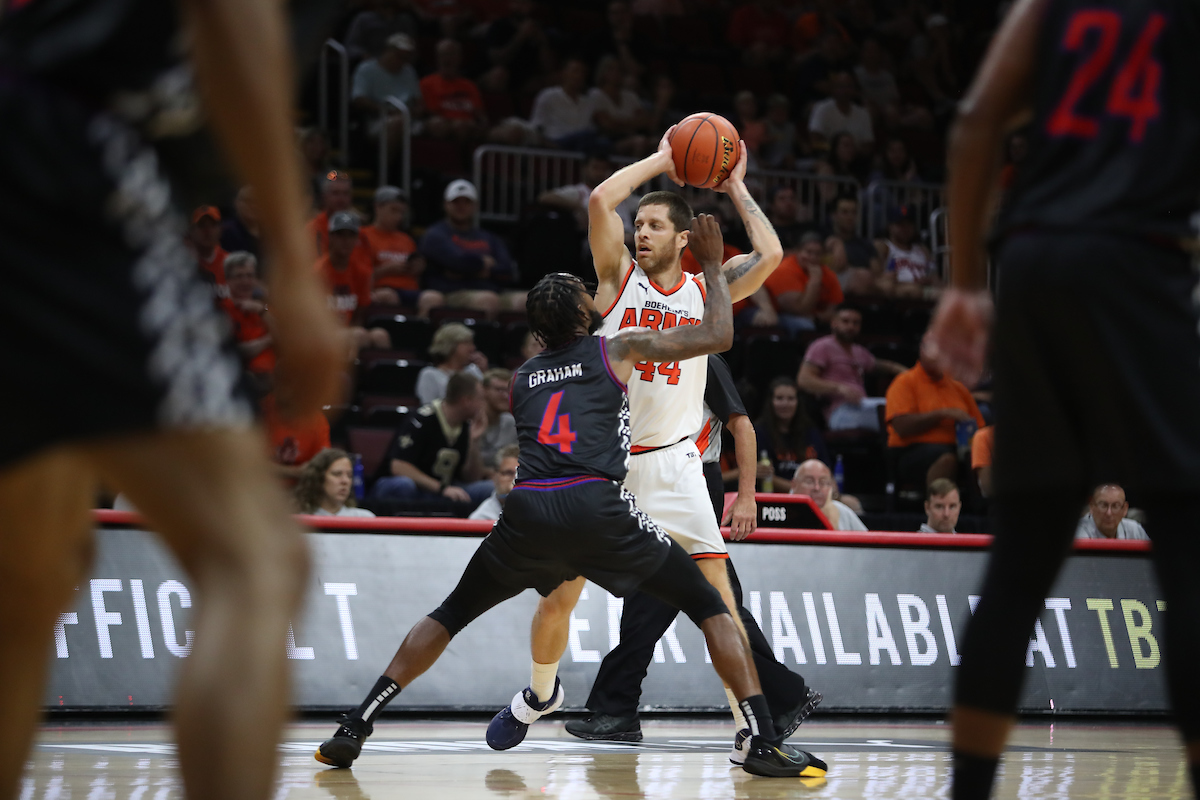 Eric Devendorf didn’t start in game one of The Basketball Tournament against Forces of Seoul, but he came off the bench to drop two points. Courtesy of Ben Solomon

Devendorf led the team in points in two games last year, including 20 points in BA’s round of 16 matchup. This year, however, with the former star relegated to the bench in favor of younger, more talented players, some of whom are in their first year with the team, he’s been held to five points per game. The team uses discipline and sacrifice in order to let the right person get hot in each of the three games, Pope said. Devendorf is no exception, and he has maximized his limited opportunities, most recently finishing with a plus/minus of eight.

“I think every Syracuse fan, supporter, if you have any heart that goes for Syracuse, you know that Eric Devendorf is the heart of this deal,” Pope said.

Early in the fourth quarter, Beoehim’s Army needed a basket to begin their drive away from Always a Brave and silence the Bradley alumni faithful. Devendorf worked his defender, trying to back him down and make a move to the basket. But he wasn’t budging. The guard looked around and saw an opening to Sykes beyond the outer arc. He flipped the ball back and Sykes, whom he typically didn’t share the court with, drained a 3 to open scoring in the final quarter.

Devendorf is no longer shooting 47.7% from the field, averaging double-digit points each game or dishing out more than three assists each night as he did with Syracuse. He hasn’t started a game yet for Boeheim’s Army. But despite no longer being the one at the free-throw line finishing off his opponent, he’s clapping Chris McCullough into the next round. He’s putting his hands on McCullough’s back when he folds after sinking the final shot against Always a Brave.

And while he’s not moving the Boeheim’s Army name card to the round of eight next to the Golden Eagles, he’s dapping up his teammates, hugging one as they stare down the name of their first challenge in Dayton, Ohio. He’s no longer the one looking up to talented professional players around him. He’s the one, as ESPN’s Angel Gray said Wednesday night, that is “holding court,” sitting on the couch of the team’s Illinois hotel.

“The things Eric is doing are, we’re not shocked,” Pope said. “There’s no fancy other word I can say other than he’s been really big for us.”