He can still vividly picture the feeling of losing his last game in the Carrier Dome, a 27-0 thrashing by South Florida. Rhodes, SU’s leading rusher from 2005, also has nine more losses from that season etched in his memory, each of them frustrating.

“This year makes me think of 2005,” Rhodes told The Daily Orange.

After losing to Notre Dame on Saturday, the 2020 team joined Rhodes’ 2005 group as Syracuse’s only teams to go 1-10 since the Ben Schwartzwalder era began. Though this season reminds Rhodes of his senior year, the 2020 and 2005 Syracuse teams are alike essentially only in record.

Head coach Dino Babers has said the 2020 season should come with an asterisk. Because of an absurd amount of opt-outs and injuries, Syracuse finished the year with fewer than 60 scholarship players, and 72% of the roster that traveled to South Bend for the season finale were underclassmen.

The 2005 team didn’t have to deal with a pandemic and the subsequent adjustments that came with it this season. Instead, the team’s issues stemmed from a near-complete coaching staff overhaul and new schemes that personnel were poorly equipped to execute.

Despite the different circumstances surrounding the two seasons, both Babers and Syracuse can learn from the issues that plagued the 2005 Orange to avoid repeating them for real.

“Our record is what it is, but it doesn’t act like, nor does it feel like our record,” Babers said after Saturday’s loss to Notre Dame. “I understand what it is. It’ll be with me the rest of my life.”

The 2005 season began with change. Daryl Gross, who hired Pete Carroll at USC, tried to make another splash in his first year as Syracuse’s director of athletics. Gross, who declined an interview request, let Paul Pasqualoni go and hired Greg Robinson, a high-profile coach who’d won a Rose Bowl as Texas’ defensive coordinator and two Super Bowls as the Denver Broncos’ DC. He’d never been a head coach before, and he never would be again.

Our record is what it is, but it doesn’t act like, nor does it feel like our record. I understand what it is. It’ll be with me the rest of my life.

The 2005 Orange lost only three games by one score, and its final three defeats came by an average of 25 points. The team averaged under 14 points per game and never scored over 20 in conference play, even against a slightly easier Big East schedule.

This year’s undermanned team spiked away a chance at overtime against NC State, trailed North Carolina by one score for three quarters and should’ve upset Boston College. The losses continued to pile up, and questions about next season began weeks before the finale. Still, young studs across the field, such as Sean Tucker, Mikel Jones and Garrett Williams, emerged. SU’s hiring of Tony White has already proved to be a victory.

Robinson failed in his first year with players he didn’t recruit, which is an interesting contrast to Babers, who brought SU to its best record in decades in 2018 with mostly Scott Shafer-era players. As Robinson brought in recruits to fit his system, the team didn’t improve because his coaching philosophy didn’t fit the Big East, Bruce said. His system remained rigid, Bruce said, despite going 5-37 and winning two conference games in four years.

“At least in my opinion, we didn’t improve,” Williams said. “We actually got worse.”

Babers believes his up-tempo, RPO-heavy offensive scheme still works. He’s seen No. 24 Tulsa and Arkansas succeed with it in 2020. But as he continues to recruit players for his system, his offense must improve. After the Notre Dame game, Babers said he wants to use the spring not to “reinvent the wheel,” but to create a “more condensed, concentrated package” for the offense. If that doesn’t work, he should adjust, unlike Robinson. 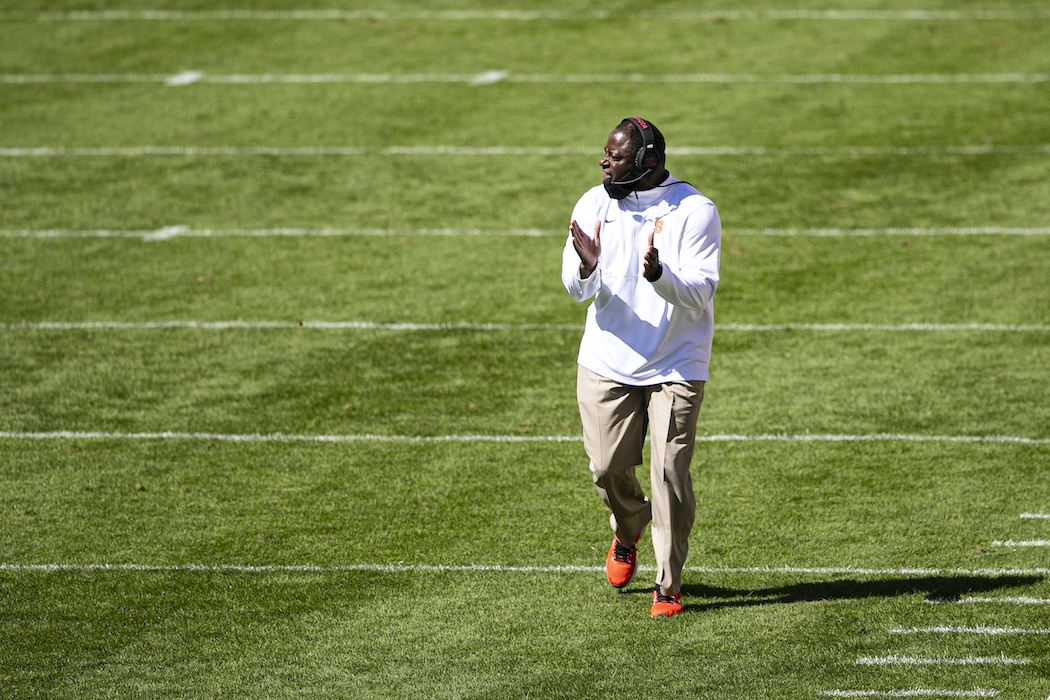 Our beat writer argues that firing Dino Babers would not be practical for Syracuse. Courtesy of Icon Sportswire

Even with the lack of talent, Babers’ offense should’ve evolved this year to further include tight ends in the passing game, especially with inexperienced and unreliable options on the outside. He should’ve been more aggressive on some fourth and short situations. The play-calling should’ve been more creative in the red zone, where SU was by far the worst FBS team.

But most of that can be excused to 2020. The personnel available forced SU to play much slower than it has in the past. Chris Elmore moving to guard was the only factor preventing Syracuse from forfeiting games, Babers has said.

Next season will be the real test. To bounce back, Syracuse will either need Babers’ recruits to execute his offense or it’ll need major schematic tweaks — both of which Robinson’s teams failed at.

In October, Syracuse Director of Athletics John Wildhack recited the Bill Parcells quote, “You are what your record says you are.” But to Rhodes, players shouldn’t let their record define them. His advice to the 2020 team: keep playing as hard as possible for yourself, your teammates, the program and NFL scouts. Forget about the record.

Some fans, however, have called for Babers to be fired because of this season. That would normally make sense for a coach with a 24-36 overall record and four of five losing seasons. But there are both practical reasons why that’s ridiculous — namely spending millions on a buyout in a pandemic — and cause for optimism with Babers. And coaching upheaval would stymie whatever progress Babers has made.

We’ve already entered the unprecedented “who’s staying, who’s going” stage of the offseason. Babers isn’t — and shouldn’t be — in that conversation. This season wasn’t 2005, but another major overhaul could cause a true repeat of history.

Danny Emerman is a senior staff writer at The Daily Orange, where his column appears occasionally. He can be reached at dremerma@syr.edu or on Twitter @DannyEmerman.

The post Emerman: This isn’t 2005. But Syracuse can learn from its last 1-10 season. appeared first on The Daily Orange.