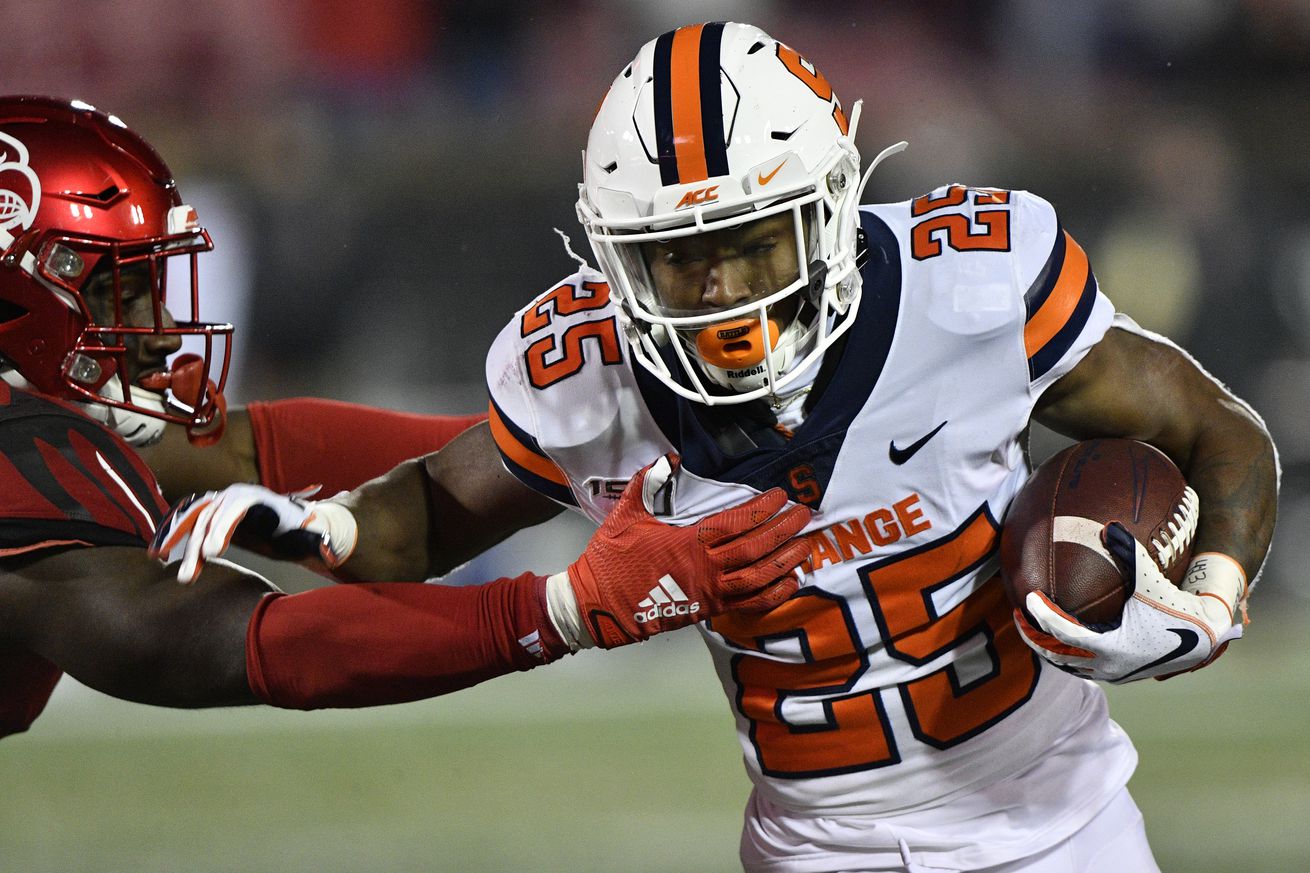 Which newcomers could see the field to a significant extent this fall?

Since he took over as coach of the Syracuse Orange football team, Dino Babers hasn’t shied away from giving freshmen a chance to contribute right away. That could be the case once again this year, especially if players wind up sitting out due to COVID-19 concerns.

But before we look at which newcomers could see the field in 2020, we wanted to look back at freshmen that have jumped in and contributed right away since Babers arrived. This won’t be an exhaustive list of guys that have appeared — especially given the changes the new redshirt rule introduced — but it gives you a good glimpse of how involved freshmen have been dating back to 2016.

In year one, any coach wants to see what they have on the roster, especially when it comes to the players he brought to campus. That was the case for many of the first-year players that saw the field for Babers’s team in year one. Moe Neal was potentially the most notable of those, with 68 carries for 357 yards on the ground. But guys like Sean Riley (11 catches for 109 yards), Kendall Coleman (1.5 TFLs), Chris Fredrick (1 INT, 2 TFLs, 2 FF), Josh Black (4 TFLs) and McKinley Williams all saw the field plenty.

Evan Adams and Colin Byrne were redshirt freshmen, but wound up starting on the line. And this list wouldn’t be complete without noting the emergence of Sterling Hofrichter as the team’s new standout redshirt freshman punter. Among the many others to see the field in both large and small roles: Andrew Armstrong, Carl Jones, Jake Pickard, Shy Cullen, Scoop Bradshaw, Evan Foster, Kenneth Ruff and Troy Henderson.

The two biggest freshman contributors were both on the offensive line, as Sam Heckel and Airon Servais — both redshirts — started 12 games. On defense, Kinglsey Jonathan contributed sparingly with 1.5 TFLs, while Tim Walton and Justin Ellis alo appeared.

As for offensive skill players, Markenzy Pierre had 25 carries for 89 yards and Chris Elmore had 23 for 56. Nykeim Johnson caught eight passes for 68 yards and Rex Culpepper threw for 518 yards and two scores after being thrust into relief duty following an injury to Eric Dungey. Liam Sullivan was a redshirt freshman, but also played on the offensive line.

The list didn’t stop there, either. As a true freshman, Trill Williams had 36 tackles, two interceptions on a touchdown, and Aaron Bolinsky wound up starting seven games as the team’s new long snapper. Tyrell Richards, Ifeatu Melifonwu and Sharod Johnson all put in plenty of work as redshirt freshmen. Gabe Horan, Eric Coley, Curtis Harper, Juan Wallace, Cam Jordan, Dakota Davis all saw the field as well, while Carlos Vettorello played but kept his redshirt intact.

A year after you see that many freshmen emerge, it’s a bit more difficult for freshmen to see the field. So was the case for the Orange last fall. On offense, Luke Benson caught eight passes for 176 yards and three scores, and Jawhar Jordan managed 306 total yards and a TD while keeping his redshirt intact. True frosh Matthew Bergeron eventually emerged as the team’s starting right tackle, while redshirt freshman Carlos Vettorello started all season at different positions.

Defensively, Mikel Jones was the major contributor, tallying 38 stops and two tackles for loss while also starting a few games. Drew Tuazama, Steve Linton, Geoff Cantin-Arku, Lee Kpogba, Courtney Jackson and Anthony Queeley all got out there as well.

Last year’s debacle clearly leaves room for some change, and we’ve already seen glimmers of some of the freshmen who seem most likely to contribute. Jordan is chief among them, and should be one of the team’s top playmakers on both offense and special teams. After some brief snaps, Jackson seems likely to see the field plenty at receiver as SU hits reset at wide receiver, and bigger targets like Damien Alford and/or Ja’vonte Williams seem likely to get looks. Anthony Red will be one of the primary reserves on the line.

On defense, Tuazama and Linton have their redshirts intact, and they’re among many “new” defenders who could be challenging for starting roles on defense — or winning them outright. Aman Greenwood, Adrian Cole, Neil Nunn and Garrett Williams are at least some of the others. That list could grow depending on if anyone opts out.

On special teams, true freshman James Williams could wind up winning the punter job and just taking the mantle directly from the departed Hofrichter. If not this year, then definitely as a redshirt freshman next season.

That’s just the freshmen that could see significant time out there, too. Depending on how redshirt rules are managed, we could see most of the class of 2020 see the field in some capacity if the season gets away from Syracuse and/or if a lot of players wind up opting out. Babers has obviously shown himself unafraid to play freshmen in the past, and this already weird season will be no different.

Any freshmen (true or redshirt) that you definitely want to see out there? Share your own thoughts below.