J. Cole Smith stepped up to the starting line of the October 2019 Wineglass Marathon in Corning, New York — the race that could punch his ticket to the Boston Marathon. He completed the race in 3:11:56, finishing 109th out of over 1,500 runners, and qualifying for one of the world’s most prestigious marathoning events. But he was just getting started.

During his training, Smith woke up each morning and began his training regimen. He would run hills on certain days, longer distances on others. This extensive training period eventually led him to achieve his lifelong goal — being able to compete in the Boston Marathon, which he was able to run two years later in 2021.

“I was very excited for him,” said his wife, Cindy Smith. “He worked hard for that. … He had to get up (early) many mornings. He had a whole regimen of his day. So I was really impressed.”

Smith, Syracuse’s dean of the College of Engineering and Computer Science since October 2019, ran the most important 26.2 miles of his life in October. He completed the Boston Marathon in 3:18:06, within the top 25% of over 15,000 runners.

When Smith first began running 10 years ago, finishing any marathon was a challenge, he said. But after spending two years casually running and occasionally participating in low-stakes marathons, he decided in 2013 to pursue the long-term goal of qualifying for the Boston Marathon. “I need to give those a shot one day,” Smith told himself at the time.

When Smith lived in South Carolina in 2014, he registered for a marathon on Kiawah Island. By then, he had already overcome the initial physical challenges of long-distance running and was regularly competing in marathons. But 18 miles into the race, his body started shutting down, he said. He completed the race, but the pain he endured during the race ruined his desire to train for another race for nearly two years.

“I just felt horrible,” Smith said. “My knee really hurt, my stomach really hurt and it was just to the point where I said, ‘I really need to take some time off.’”

But Smith’s commitment to one day running in the Boston Marathon gave him something to train for, he said. It was a “long-term project” for Smith, and eventually, he was able to get back to training and competing full time, taking part in multiple Boston Marathon qualifying races. 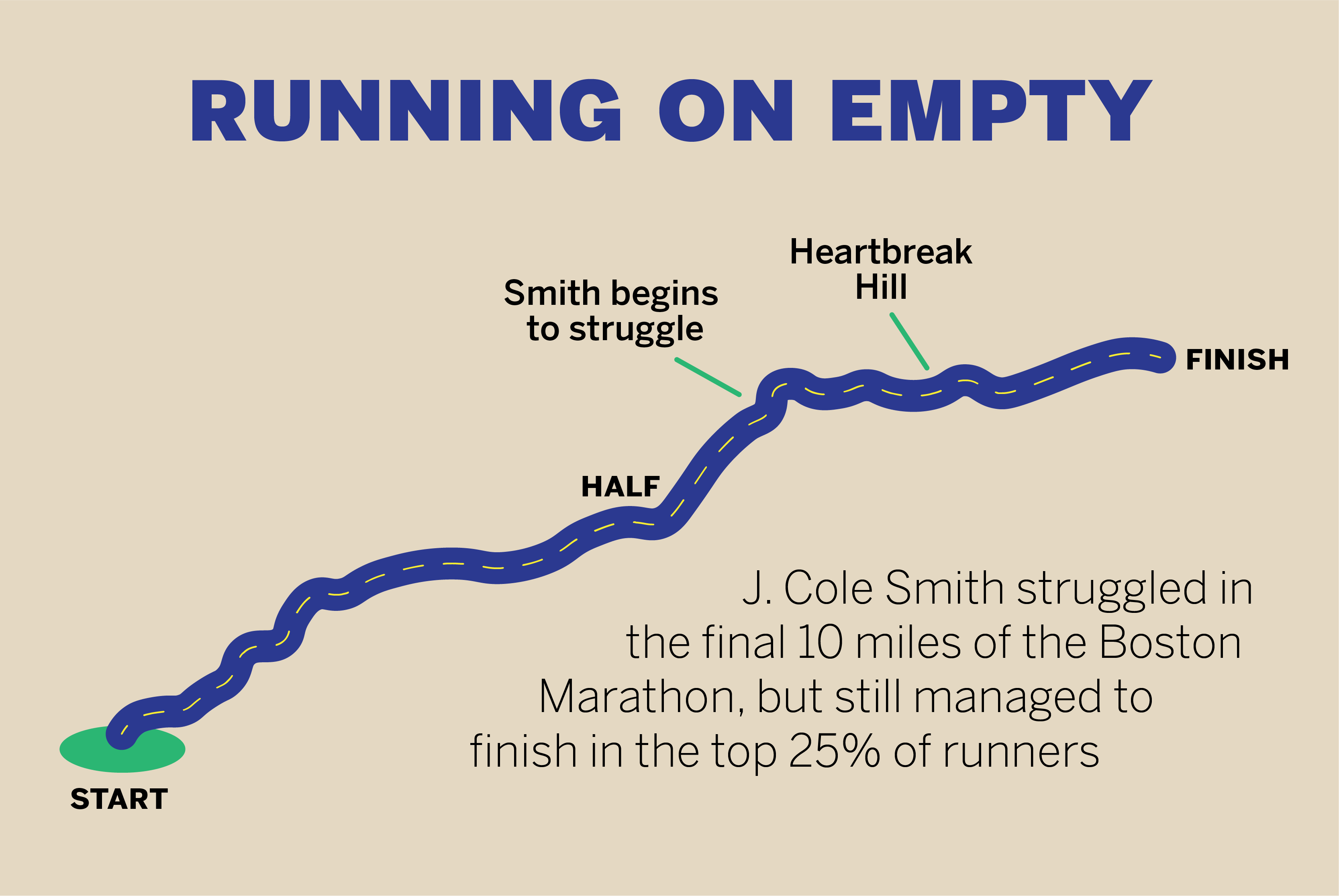 In his many attempts, however, Smith missed out multiple times. Even though he entered most races feeling confident in his training regimen, he’d eventually end up either fatigued or injured. Smith knew he was in relatively good running shape, but acknowledged that the journey to Boston, Massachusetts, would be more difficult than anticipated.

“It’s something that I can make into a multi-year project, and then either I’ll succeed and I’ll feel great, or I’ll fail,” Smith said he told himself while training.

Smith eventually qualified for the Boston Marathon, and he ran it on a frigid October day with the final 10 miles bringing back familiar challenges, he said. The marathon’s largest hill, also known as Heartbreak Hill, arrives after the 20th mile, where race management becomes most important. But around the 16th mile, a series of deceptively steep hills began to take a toll on his stamina.

Still, Smith still finished the race and plans to use it as a learning experience, he said. After completing the marathon, he decided that he wanted to do it again. But he said now that he’s run it once, next time, he wants to stop and smell the roses.

“I did run this one as hard as I could,” Smith said. “I might not go as hard next time so I can enjoy a little bit more of the atmosphere without being so laser-focused on all the things you have to be worried about if you’re running a race hard. I want to be able to soak that up.”