Syracuse’s late-season run to the NCAA Tournament’s Sweet 16 was fueled by the best free-throw shooting team in program history and a top-10 defense in terms of block rate even without center Bourama Sidibe, who missed all but two games due to injury. Buddy Boeheim scored 25 or more points in five of his seven games in March, and Marek Dolezaj served as a primary facilitator in the Orange’s offense while simultaneously plugging their center spot.

On Tuesday, the Orange opened their 2021-22 campaign by defeating Lafayette 97-63, but they did it with a completely different look. Quincy Guerrier, Kadary Richmond, Robert Braswell and Woody Newton all transferred. Alan Griffin declared for the NBA draft and signed with an agent. Dolezaj signed with a professional team in Ukraine. That left the Orange with two returning starters — Buddy and Joe Girard III — and one incoming freshman with Benny Williams, although they secured a trio of commitments from the transfer portal to replace the forward depth lost.

“Obviously we lost two forwards and a guard that contributed a lot last year, but we were able to pick up guys in the portal that fit in exactly into those positions,” Syracuse head coach Jim Boeheim said on media day. “I think the overall effect was good on who we lost and who we got.”

Before SU’s second game of the season against Drexel on Sunday, here’s a look at numbers and stats — with data used from KenPom — that could alter the trajectory of the Orange’s season.

Syracuse finished with the worst rebounding defense in the ACC last year, allowing 1060 total rebounds or an average of 37.9 per game. Its rebounding depth took a hit when Sidibe left the 2020-21 season-opener against Bryant and never returned to full health the rest of the season, forcing Dolezaj to slide to center and asking more from the rest of its forward depth — Guerrier, Griffin, Braswell and others — going forward. 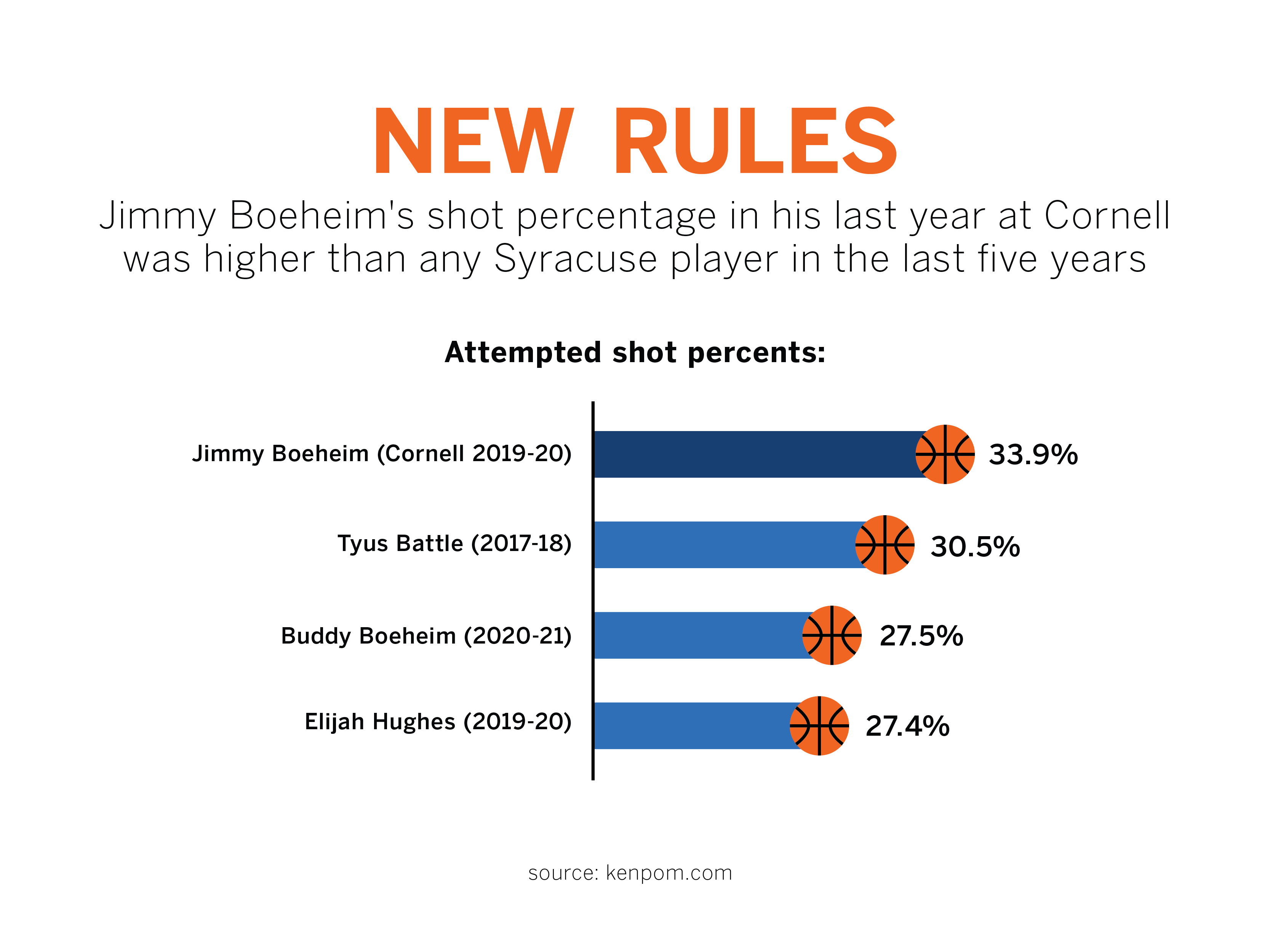 But that forward depth is gone, as is Dolezaj under the basket. Sidibe has another injury and is expected to miss at least a month. Jesse Edwards had the highest offensive and defensive rebounding percentage numbers for the Orange last year, with 11.4% and 20.5%, respectively, but didn’t record enough minutes in order to qualify for national rankings.

Last year was the first season that Syracuse didn’t have a player who drew at least four fouls per game on average since 2002. And consequently, that gave Syracuse its lowest free-throw rate since 2002 at 28.3%, which ranked No. 255 in the country. That means the Orange attempted fewer free throws compared to traditional field goals, and an element of that is connected to their inability to draw fouls and get to the line.

Guerrier led SU in fouls drawn per 40 minutes last year with 3.7, and Preston Shumpert led that 2002 team with 3.5. Buddy and Girard, once again the top two guards entering this season, drew 2.6 and 2.8 fouls per game, respectively. This season, Syracuse doesn’t have the luxury of Richmond, who averaged 3.5, to come off the bench and get to the line, but Edwards established a 6.5 fouls per 40 minutes rate after his 17 minutes against Lafayette.

When Jimmy last played a full season, during the 2019-20 season at Cornell, he took 33.9% of the Big Red’s shots. But since KenPom started tracking data, only one Syracuse player has ever attempted more than 30% of the Orange’s shots in a single season, and that was Tyus Battle and his 30.5% in 2017-18 — which ranked 90th in the country.

Buddy led SU in this category with 27.5% of the shot attempts last year, and while Jimmy certainly won’t have the same size of a role that he had with Cornell, the departures of Griffin (25.0) and Guerrier (21.5) opened up additional shots in the offense. 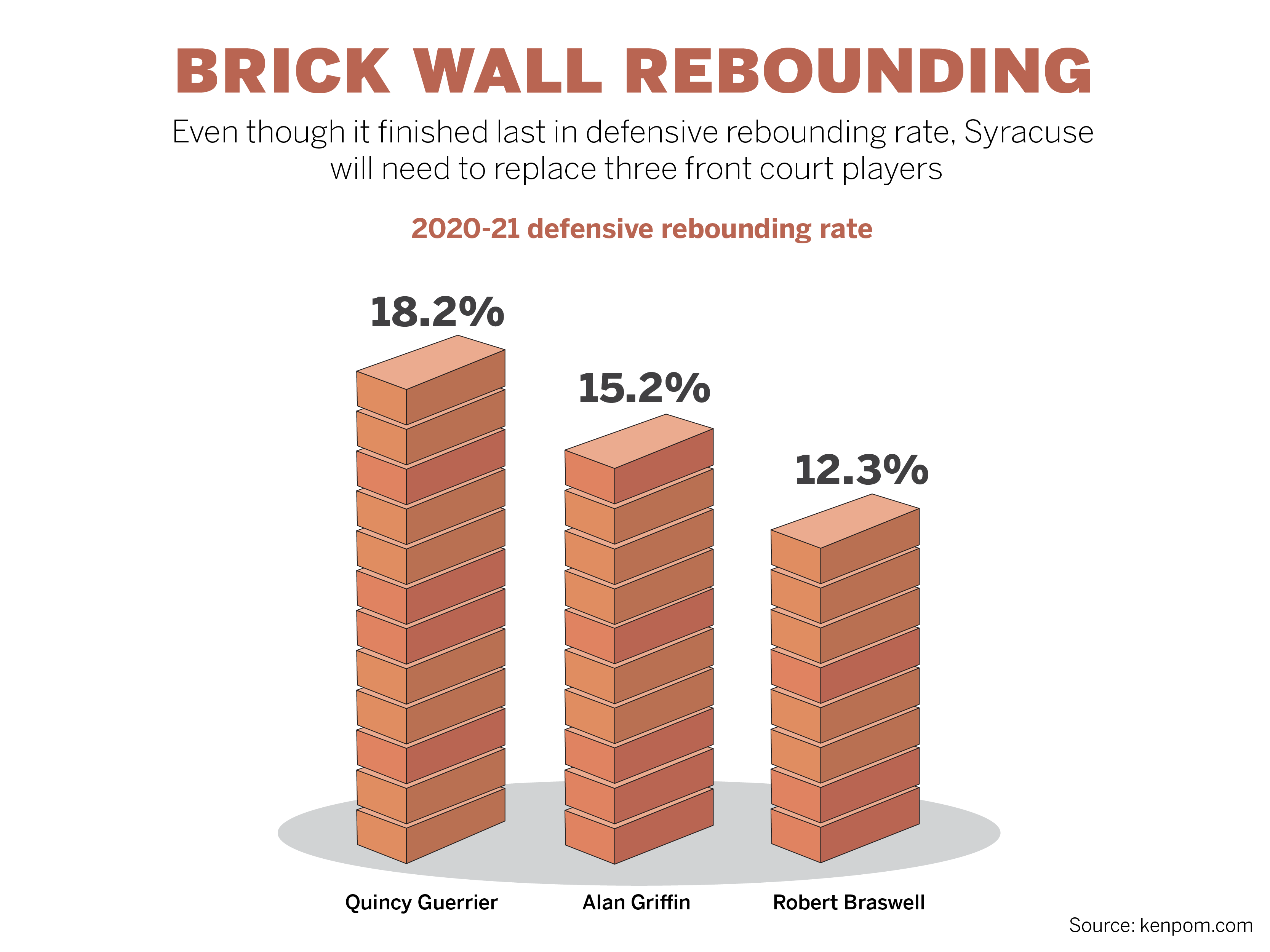 Keyed by a run in the Atlantic Coast Conference and NCAA Tournament where he made nearly 50% of his 3-pointers, Buddy finished the season with a 38.3% conversion rate on shots from that distance — making 77 of his 201 attempts. According to KenPom, that’s the highest 3-point percentage among SU players who have attempted at least 200 3-pointers since Andrew White III during the 2016-17 season.

Buddy has converted on 37% or more of these 3-pointers in each of his past two seasons, and last year, that output came despite an early-season stretch where five of his games ended with a single-digit point total.

The post Data preview: Numbers that could impact the trajectory of SU’s season appeared first on The Daily Orange.