Syracuse football failed to earn bowl eligibility on each of its three chances after its bye week. The Orange’s offense and defense — which had shown drastic improvements from the 2020 season — returned to their prior form, and faltered against Louisville, NC State and Pittsburgh.

Still, Syracuse finished with four more wins than last year. Head coach Dino Babers will be back next season, though offensive coordinator and play caller Sterlin Gilbert will not be. The Orange also established two offensive weapons for the future in Garrett Shrader and Sean Tucker while the 3-3-5 defense finished as the country’s 22nd-best overall defensive unit in its second year at SU.

With another year in the books, here are the stats breaking down Syracuse’s 5-7 finish:

Syracuse’s offensive scheme was simple this season: Tucker, Tucker and more Tucker. For most of the year it worked. Tucker led the nation in all-purpose yards (1,505) and all-purpose yards per game (167.22) heading into the bye week.

But Pittsburgh and Louisville’s defenses showed they could stop Tucker, holding him to 29 and 95 rushing yards, respectively. He was also a nonfactor in the receiving game, finishing with -2 yards against NC State and only 1 yard against Louisville. By the end of the season, he lost his bid to be the best running back in college football.

Tucker still finished as the nation’s fourth-best rusher, 4 yards shy of the 1,500-yard mark. He was responsible for 36% of the Orange’s offensive plays, according to College Football Data, and 55% of their rushing plays. With that offensive load, Tucker breezed past Joe Morris’ 1,372-yard all-time single-season rushing record, launching himself into the pantheon of Syracuse greats.

But completely relying on Tucker’s abilities won’t help the Orange offensively in the future. They need to be able to create a steady passing game with Shrader instead of solely depending on running back screens to gain yardage.

Syracuse’s offensive line paved the way for Tucker’s record-breaking season, but how much of that success was just from his ability, rather than the offensive line making space for him?

According to Football Outsiders, Syracuse’s offensive line ranked 25th in average line yards. This ranking is adjusted for the running back’s ability to make “highlight plays” by getting past the first level, meaning that if Tucker got 4 or more yards on a carry, the offensive line was only awarded for 50% of the play’s distance. 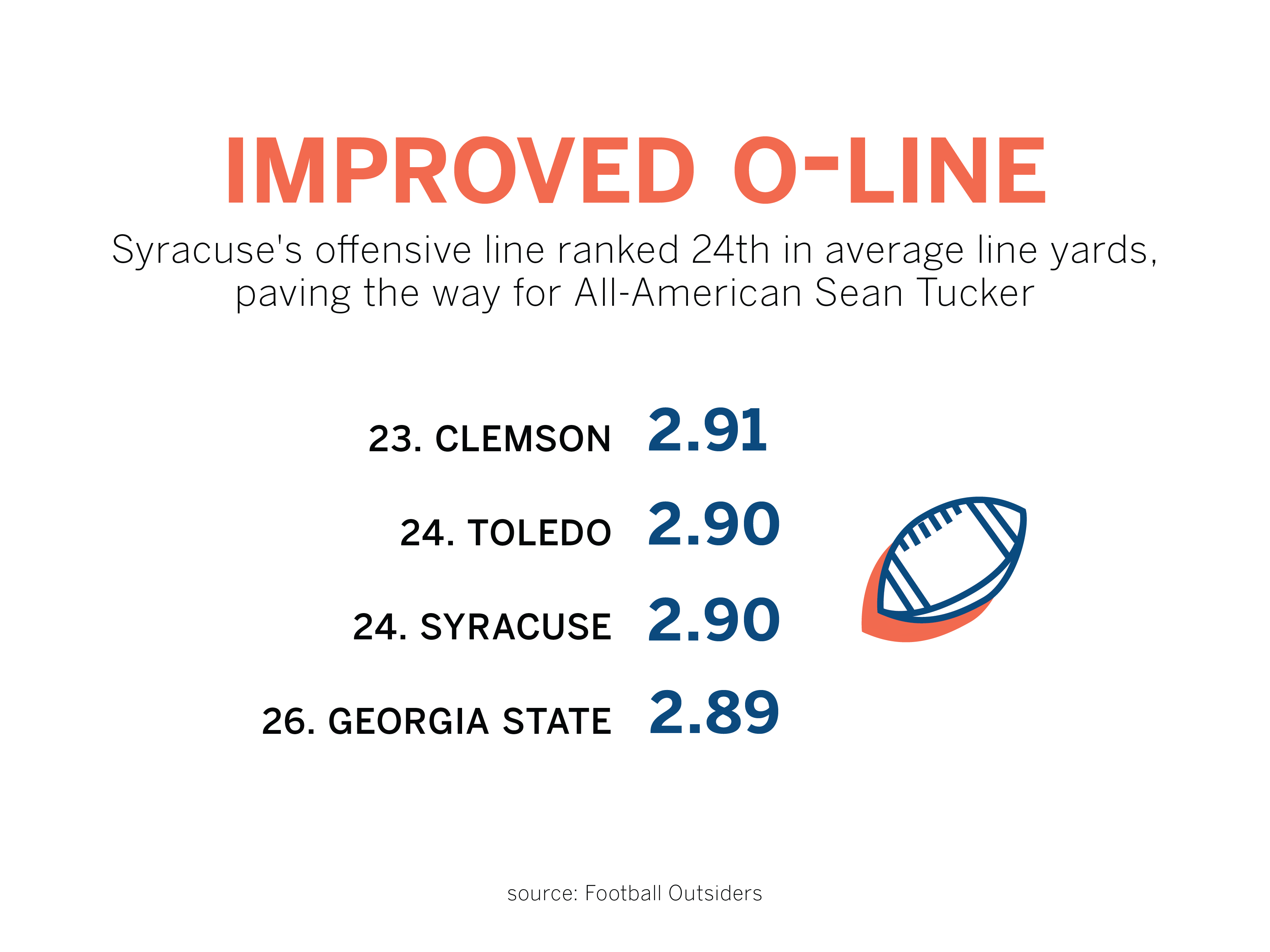 Still, the issues for the Orange in the run game came at the initial point of the snap, where they were outmatched against teams like Pittsburgh and Rutgers, who held Tucker to 29 and 54 rushing yards, respectively. SU was stuffed on 19.3% of run plays, meaning that those carries were stopped at or before the line of scrimmage. That rate was ranked 90th in the country.

But more alarming statistics proving Syracuse’s inability to stop pressure led to more struggles in the passing game. According to the standard downs sack rate metric by Football Outsiders, which measures the sack rate for standard downs on pass attempts, Syracuse was sixth-worst nationally in 2021 — it allowed sacks on 9.7% of these plays. This is where the Orange will need to invest most of their time next season with a new offensive system so that Shrader has enough time to throw the ball.

Without a steady passing game, Syracuse routinely struggled during third-and-long situations. The Orange ranked 119th nationally in third-down conversion rate, only succeeding on 32.7% of third-down plays. In 12 games, they only converted on 51 third downs.

Fixing Shrader’s passing ability, or at least giving him more intermediate options to pass to on third down should fix this problem. Still, a deeper look shows that the Orange have had issues at gaining any yardage on first and second downs, putting them at a disadvantage on third down.

SU ranked 109th in OBD, according to Football Outsiders, a statistic which shows the percentage of offensive drives that gain zero or negative yards. On 15% of its drives, Syracuse gained no yards. While third down is an issue, this shows that SU needs to work on gaining yardage on every down, which will lead to fewer third-and-longs.

Syracuse defensive coordinator Tony White will be back next season with two years of leading the 3-3-5 defense under his belt. The Orange’s defense should be even better next year, but they made a lot of defensive strides this season, specifically after the 2020 season where they spent most of the year trying to learn the new scheme.

SU ended 2021 tied for the 28th-best rushing defense nationally, allowing an average of 126.1 rushing yards per game. This likely resulted from having to practice against one of the best running backs in the country in Tucker. Still, linebacker Mikel Jones was the biggest difference maker in the middle of the defense.

Jones — who said he was “50/50” about whether he’d enter the NFL draft or return to SU — finished with a team-leading 60 solo tackles and 50 assisted tackles while also recording four sacks on the year.

White also found two sidekicks for Jones in Marlowe Wax and Stefon Thompson, who were vital at the second level. Thompson and Wax finished with 79 and 60 tackles, respectively, which were second- and third-best on the Orange.

At one point in the season, Syracuse ranked seventh nationally in defensive explosive rate, allowing only 8.49% splash plays.

This means the Orange were able to stop 10-20 yard gains on more than 90% of downs. SU’s success in this statistic came in part from strong play by defensive backs Duce Chestnut and Garrett Williams.

But Williams struggled with injuries throughout the year, and by November, the secondary allowed 303 passing yards against NC State, and Pittsburgh’s Kenny Pickett threw for four touchdowns a week later. The secondary is good, but the Orange need them to be better next year to stop their opposition’s explosive plays.

The post Data Dive: Here are the numbers that defined Syracuse’s 2021 season appeared first on The Daily Orange.