Expectations were high entering the 2019 Syracuse football season. The Orange were fresh off a 10-win season that included a second-place finish in the Atlantic Coast Conference, an unbeaten season in the Carrier Dome and a 34-18 win against West Virginia in the Camping World Bowl.

Another bowl appearance was expected that season, and many thought the Orange would be the ACC’s second-best team again. They began the season ranked inside the AP Top 25 and rose to No. 21 in the rankings after a Week 1 win against Liberty. Then, the season unraveled. The Orange finished 5-7, missed a bowl game and floundered near the bottom of the ACC standings for much of the season with a 2-6 league record.

In 2020, the COVID-19 pandemic canceled spring football, forced Syracuse to change its summer workout plan and limited the amount of time for two new coordinators to implement schemes. Most conferences have already been postponed, leaving the season in jeopardy

Below is part one of The Daily Orange’s 2020 season analytical preview, with all offensive and defensive line data from Football Outsiders and efficiency numbers from collegefootballdata.com.

Syracuse’s offensive line yards rating, a way to measure run blocking success, on standard downs dropped from 32nd nationally to 93rd from 2018 to 2019

Any conversation about the failures of the 2019 SU season starts in the trenches, where the Orange’s inability to protect Tommy DeVito and block for runs on early downs caused the majority of the regression.

On standard downs (1st down, 2nd and 7 or shorter, 3rd and 4th and 4 or less), the Orange averaged 2.70 line yards in 2018 and dropped to 2.34 in 2019, ranking 93rd. Line yards is a metric that assigns the offensive line either credit or blame for a running play, depending on the number of yards gained.

The drop off is even steeper in the metric of opportunity rate, which measures the percentage of run plays where the Orange gained at least four yards, when four yards could be gained. Syracuse dropped from 47.8% (No. 65 nationally) to 43% (No. 110 nationally) in 2019. The Orange failed to replace offensive tackles Cody Conway and Koda Martin, along with guard Aaron Roberts

But the Orange’s offensive line was significantly better in the final few games following the departure of Ryan Alexander and the insertion of true freshman Matthew Bergeron into the starting lineup at right tackle.

So is there hope for Syracuse? I’d say there’s actually reason for LOTS of enthusiasm. The Orange return 4 likely starters: Servais, Davis, Vortello & Bergeron. But those guys were on the field together just 38% of snaps last year. These splits are insane… pic.twitter.com/izIHqvoDOI

The Orange’s offensive drop off came from an inability to block for Moe Neal and protect DeVito.

Of the 130 teams in Division I FBS football, the Orange finished No. 126 in both overall sack rate (12%) and standard down sack rate (10.8%). While the score has a large impact on total sack numbers because losing teams pass more to catch up, the sack differential for SU went from +6 in 2018 and back to -20 in 2019. Even when the Orange’s offense was successful in 2018, it wasn’t because of explosive plays.

Bill Connelly’s SP+ ratings for offensive explosiveness rated the Orange as the eighth-most explosive in the ACC. Babers’ offense isn’t built to overcome standard downs. The Orange’s constant sacks and failures to establish the run on 1st downs left SU needing explosive plays that aren’t built to come from an offense that focuses more on horizontal passing than vertical. 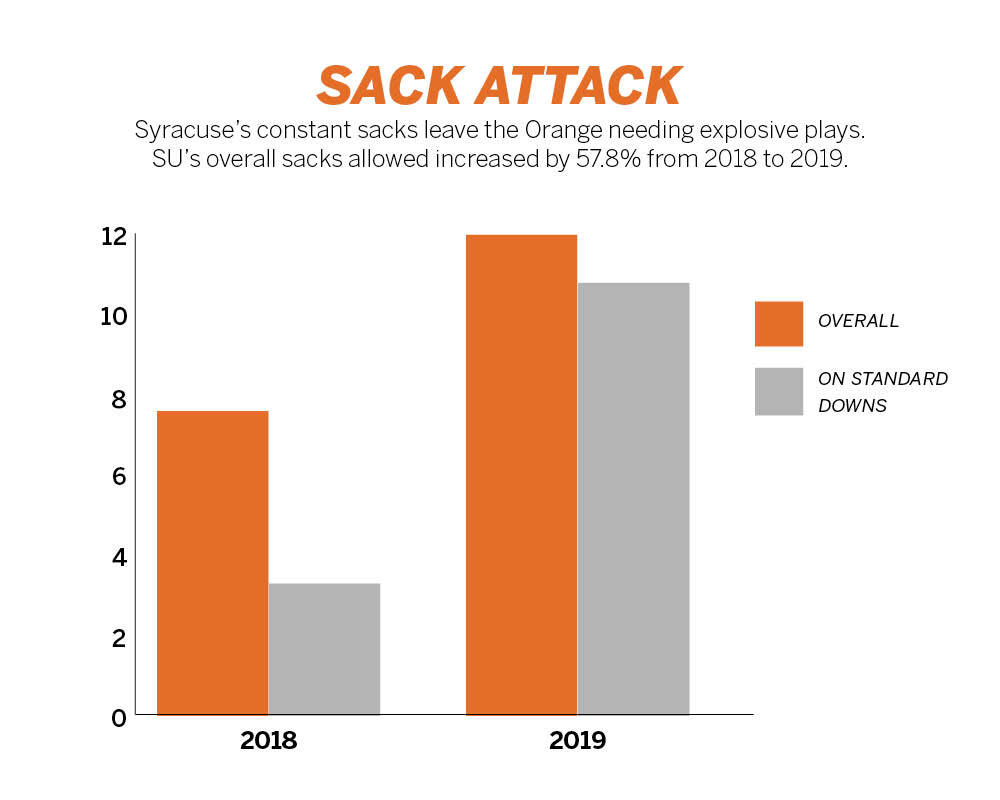 The higher the number, the more efficient an offense is. Only Duke (.01) and Georgia Tech (.06) had a lower PPA/play than the Orange (0.07) in the ACC in 2019. Syracuse was actually a middle of the pack team on third downs, but early down struggles, including a negative PPA/play on first down, led to offensive failures and punts more often than not.

Babers’ offense is based on the early-down running game first and foremost, and there are warning signs from the 2019 data about the projected starting running back. Abdul Adams proved himself as a receiving back, averaging 1.016 PPA on pass plays, albeit in a small sample size. But Adams was less effective than Neal, and actually averaged -0.003 PPA on rushing plays in 2019.

Given that SU is replacing two of its top three receivers, on top of Neal, there’s a reason that SU ranks near the bottom in returning production, according to The Action Network’s Collin Wilson.

Notes on Returning Production by Strength of Schedule for @ACCFootball

• Va Tech lapping the field in returners, would have the easiest schedule sans Penn State
• Wake will be searching for offense against Old Dominion
• Will Tim Beck kickstart the Wolfpack Offense? pic.twitter.com/eGbQfRlnfU

Where the production may be lacking at WR, Syracuse should turn to its tight ends for more in 2020

The Orange have an underrated tight end duo in senior Aaron Hackett and sophomore Luke Benson, who were both underused in the 2019 season. While the offensive line struggled last season and time in the pocket was limited, DeVito never established a true safety blanket or hot read option underneath. With both WR3 Sean Riley and WR1 Trishton Jackson not returning in 2020, SU might use two more tight end sets next season.

In spots where SU was unable to establish the run or protect DeVito, there wasn’t enough focus on getting the ball out to tight ends to relieve pressure. Hackett had a 3% usage rate, compared to 1% for Benson in 2019. 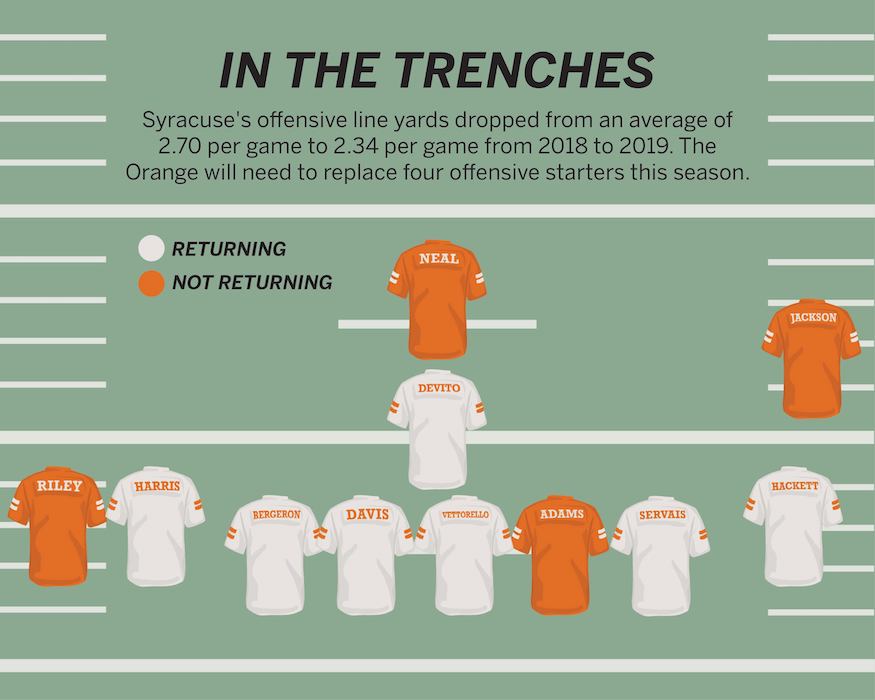 DeVito’s 19-5 TD-INT ratio shows he can develop into a quality pocket passer if given some protection. But he’s not as agile or mobile as Eric Dungey, or even his backup, Clayton Welch, was.

The chart below shows each SU quarterback performance in 2019 (min. 20 snaps). Welch’s two good performances are aided not by passing, but by his PPA per rush as a scrambler and runner.

DeVito’s best performance of the season came against Western Michigan, while his worst came in a 41-6 defeat to Clemson. He had encouraging passing performances against both Boston College and Louisville, both games the Orange lost badly due to poor defense.

As Syracuse enters a season that still hangs in the balance, there are plenty of question marks concerning this SU roster. With almost a fully returning offensive line and quarterback, SU should improve through the middle, but it’s unclear how much new offensive coordinator Sterlin Gilbert will be able to implement his ideas in 2020.